The Red Arrows team paid a VE Day tribute this morning with a stunning formation flypast over the City of London and Buckingham Palace.

The video was posted by the team on Twitter, captioned: ‘Cockpit footage from a flypast by the #RedArrows this morning to mark the 75th anniversary of VE Day. Several #London landmarks in sight as the Aerobatic Team paid tribute.’

The nine planes flew in formation above the River Thames in a flypast over central London at 10.10am today, letting loose their red, white and blue smoke to mark the colours of the Union Jack before heading back to their base at RAF Scampton in Lincolnshire.

Elsewhere in the UK, many were able to wave from their balconies and gardens as Typhoon fighter jets flew over Edinburgh, Cardiff and Belfast. 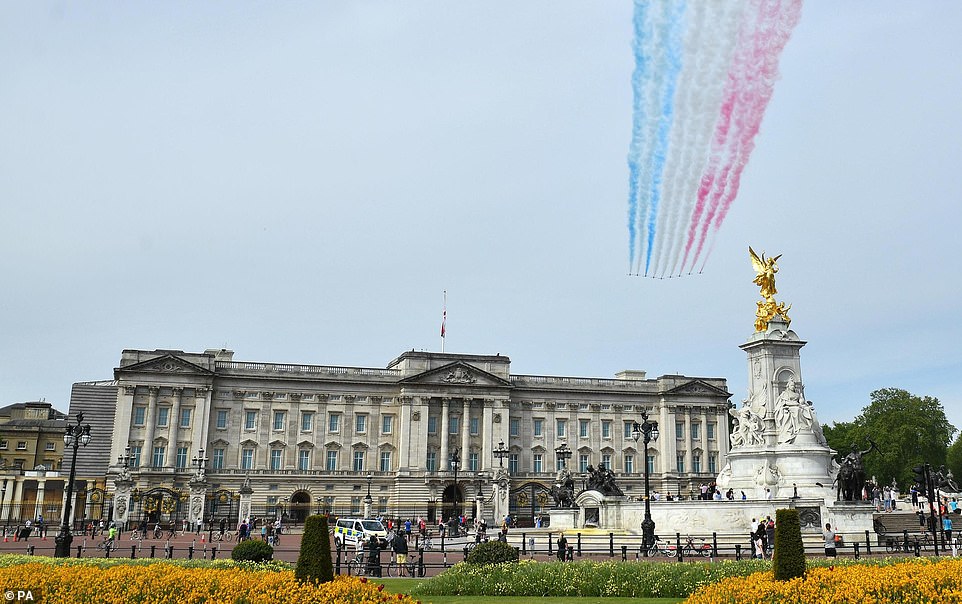 The Royal Air Force’s Red Arrows pass over Buckingham Palace in the capital city during a flypast in central London to mark the 75th anniversary of VE Day. The nine planes flew in formation over the River Thames at 10.10am this morning 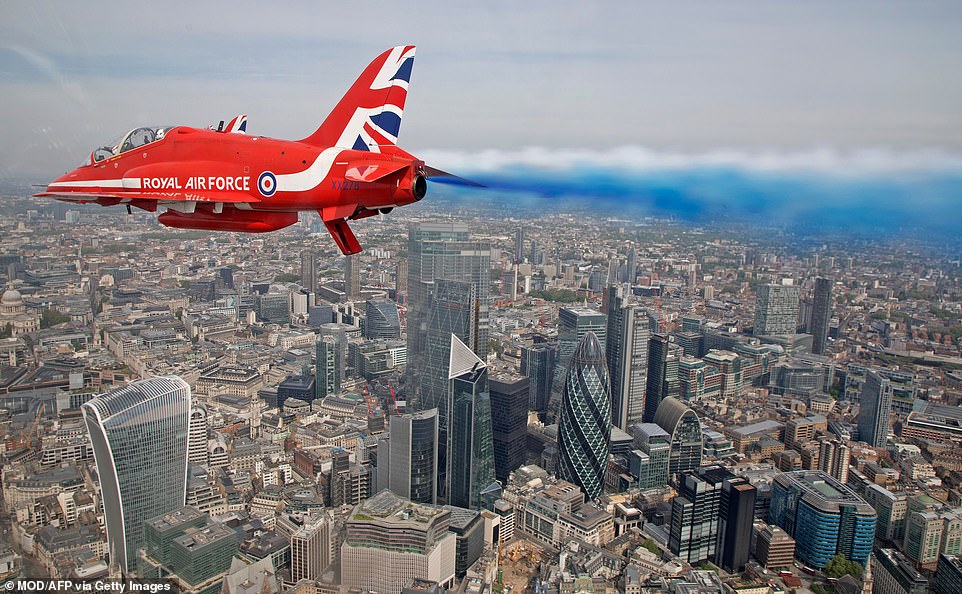 The Red Arrows conduct a flypast over London for VE Day, the end of the Second World War in Europe. The aerobatics display team loose their red, white and blue smoke to mark the colours of the Union Jack as nine planes took to the skies today 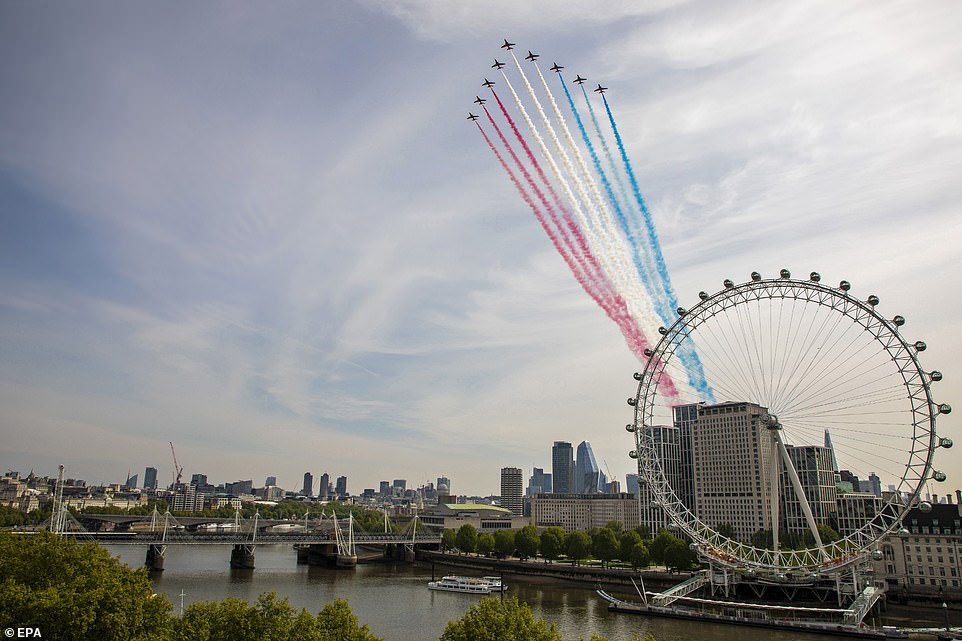 The Red Arrows’ Hawk T1 jets soaring over The London Eye for the 75th VE Day celebrations in London this morning. The aerobatics team marked the end of their North America tour last October after touching down in RAF Scampton

Social media users reacted to the video in awe, with one tweeting: ‘What a thrill to see you fly right over my house! Everyone was in their gardens to watch you whizz by.’

Another wrote: ‘Spectacular as ever. Thank you.’

People adhered to social distancing rules as they gathered on the hills of the capital city to marvel at the Royal Air Force’s team.

A Spitfire flypast organised by the Daily Mail has also taken place at a number of locations in the South East, including a veterans’ care home in Worthing, West Sussex and Queen Victoria Hospital in East Grinstead.

The Mail was granted special permission to send a Spitfire across the country to salute our veterans – along with those who are looking after them.

There was one flypast for the Care For Veterans home in Worthing, West Sussex, which received more nominations than any other. 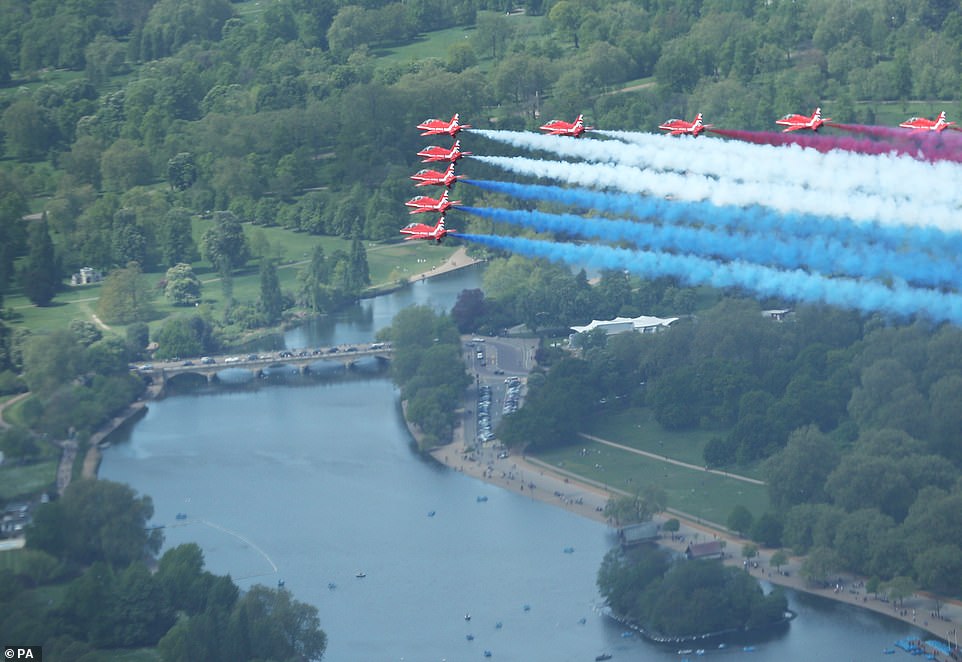 The Royal Air Force’s Red Arrows flying in formation over The Serpentine in Hyde Park, London, to mark VE Day, the end of the Second World War in Europe. A Spitfire flypast organised by the Daily Mail has also taken place at locations in the South East 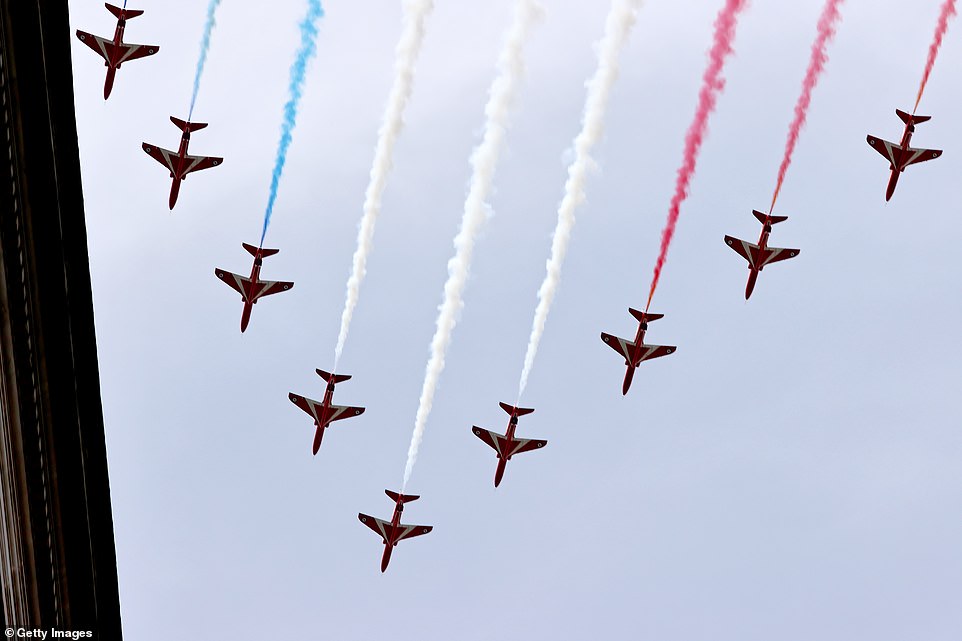 RAF Red Arrows are seen flying over Downing Street in London today. People adhered to social distancing rules as they gathered on the hills of the capital city to admire the aerobatics team 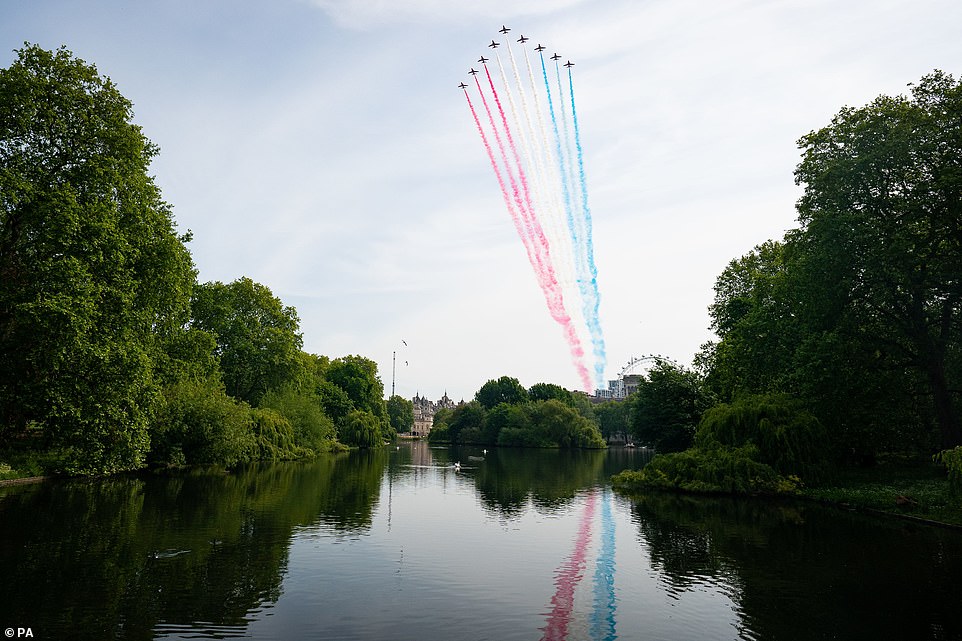 The Royal Air Force’s Red Arrows passing over The London Eye and St James’s Park in central London during their flypast for the 75th anniversary of VE Day, painting the skies red, white and blue 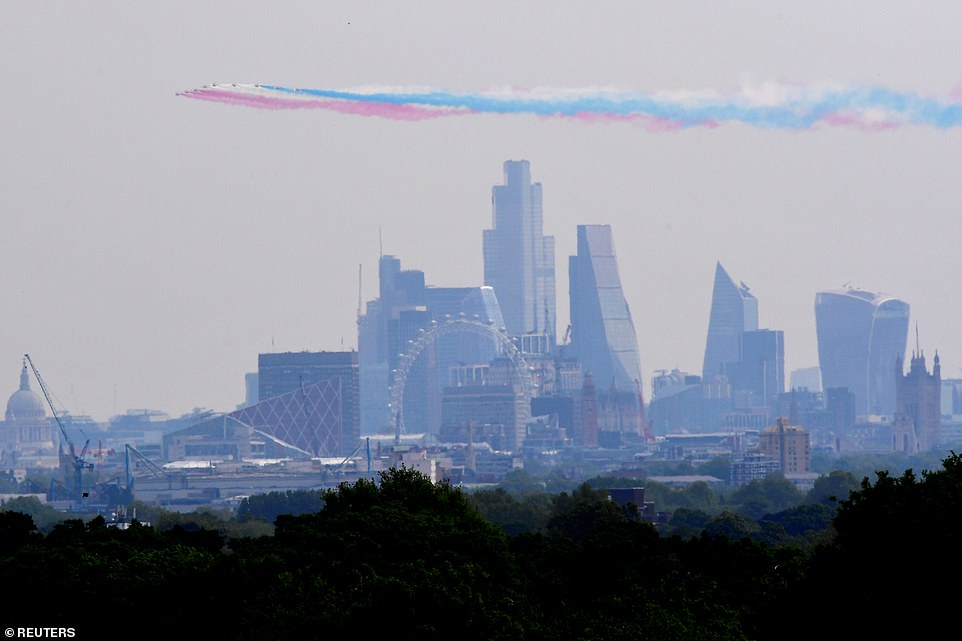 The Red Arrows flying across the City of London for VE Day this morning over numerous landmarks, including The London Eye and St Paul’s cathedral. A host of other events has also marked commemorations for the anniversary 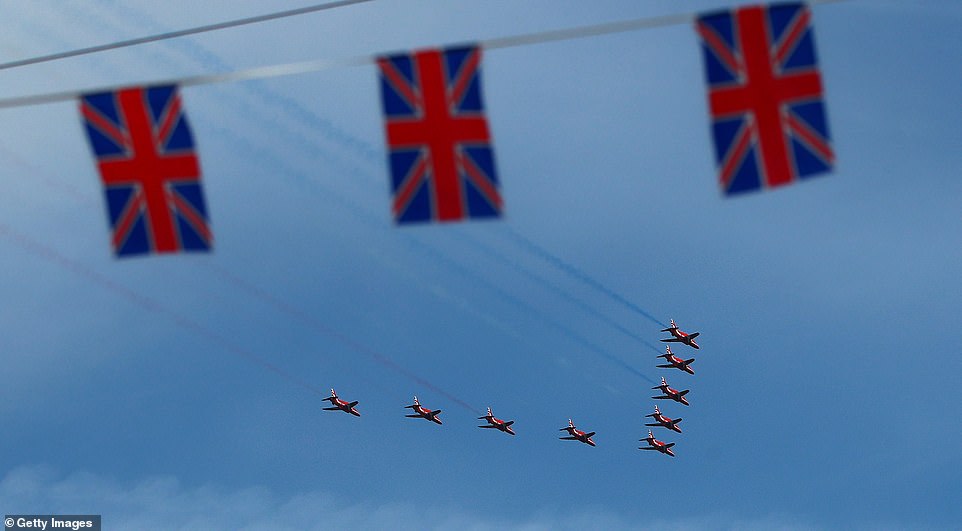 The RAF’s Red Arrows flying over Northampton today. Although large-scale public events are unable to go ahead because of coronavirus restrictions, tributes are being paid by politicians and members of the Royal Family 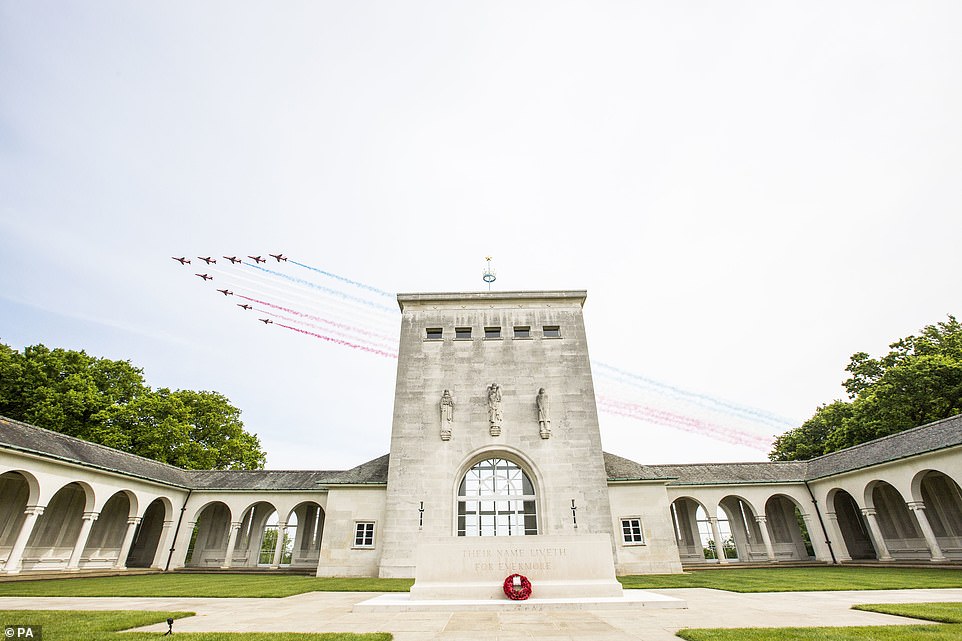 The Red Arrows flying past the Runnymede Memorial in Egham, Surrey, to thank Second World War veterans and to mark the 75th Anniversary of VE Day. Other flypasts also took place with Typhoons soaring over Edinburgh, Cardiff and Belfast 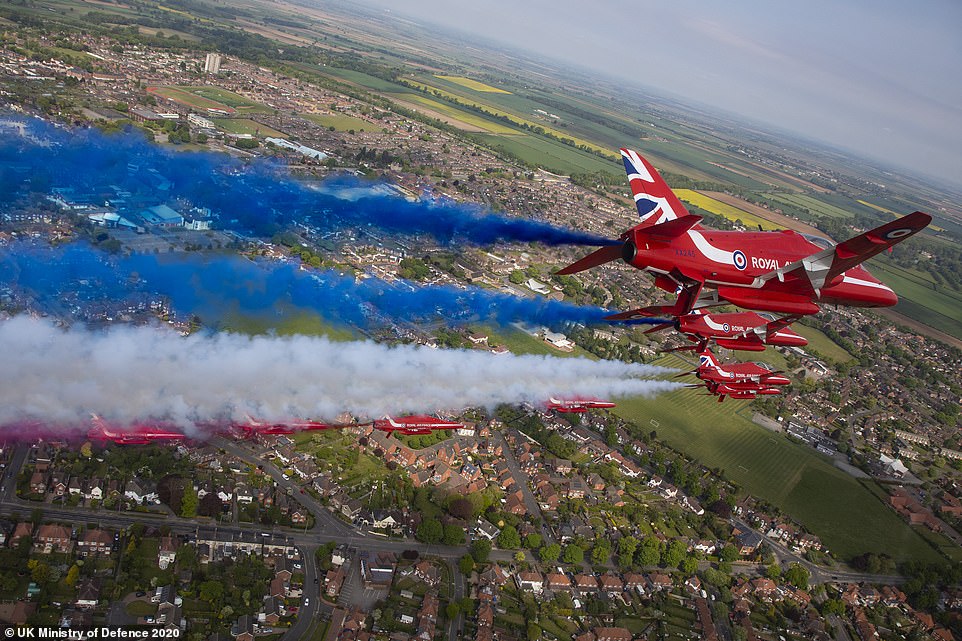 The Red Arrows captured heading back to RAF Scampton, their base in Lincolnshire, following their flypast over London. Although celebrations were limited due to the lockdown, many were able to wave from their balconies and gardens

Among its residents are several war veterans including 96-year-old Len Gibbon. Originally from London, he joined the Royal Army Service Corps as a Despatch Rider when he was just 20.

He remembers landing in Normandy in 1944, climbing off his ship and jumping on to a smaller landing craft to take him ashore.

Mr Gibbon had followed his unit to Germany by the end of the war. After hearing news of the ‘Salute The Heroes’ flypast, he said: ‘The last time I saw a Spitfire, I was in Hamburg, Germany.

‘I was pulling the throttle down hard on my motorbike riding fast, the road ablaze with fire, and I saw a Spitfire coming towards me flying low. From my side, I saw someone waving at me, I knew then the war had ended.

‘I stood on my saddle and celebrated. I will wear my jacket, whisky in hand, and wave back once more to celebrate this day.’

Today commemorates the official surrender of Germany to the Allied forces on May 8 1945. 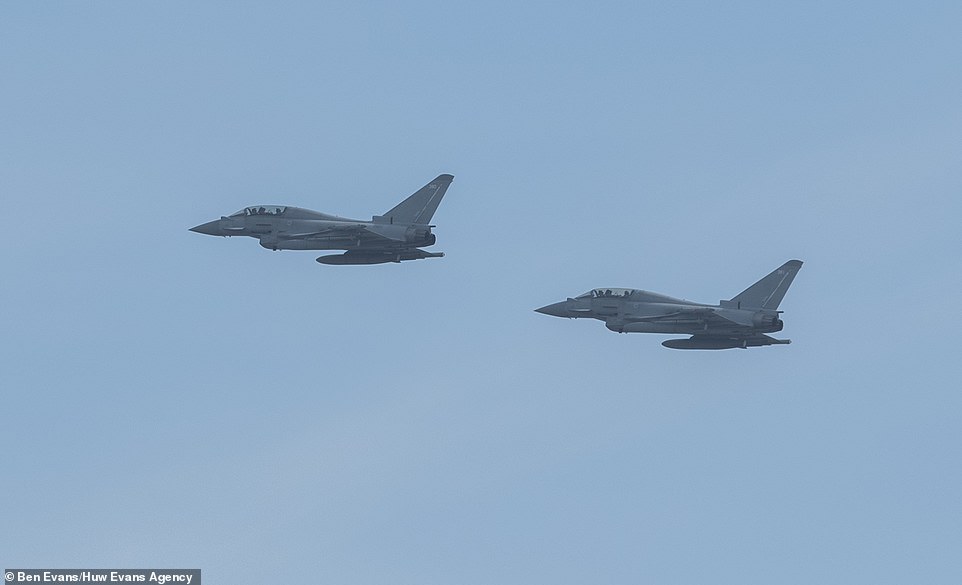 Two RAF Typhoon aircraft fly over Cardiff, the capital city of Wales, to mark VE Day celebrations. The day has been designated as a public holiday for Britons up and down the UK, to mark the 75th anniversary of the end of the Second World War 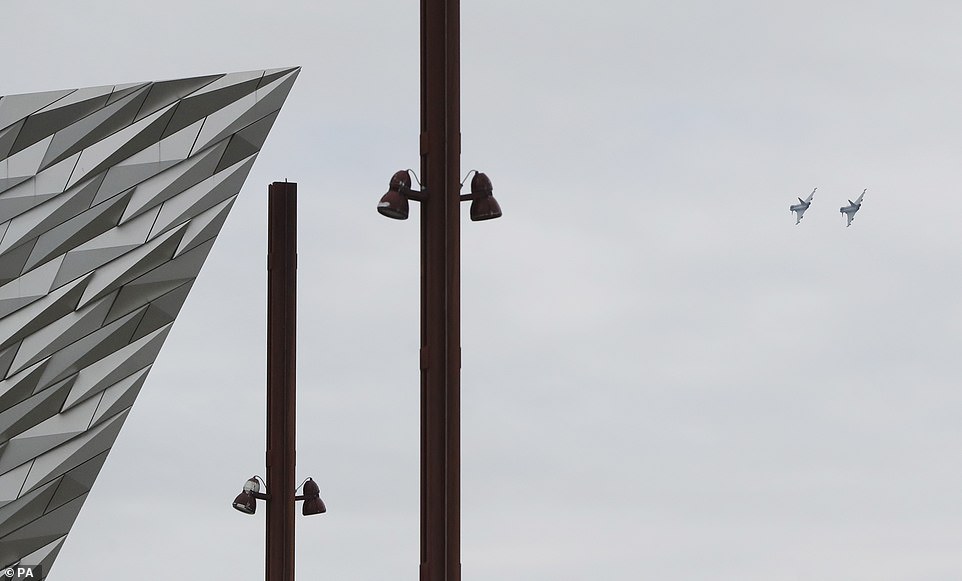 Two RAF Typhoons perform a flypast over The Titanic slipway in Belfast, to thank Second World War veterans and to mark the 75th anniversary of VE Day. People have been encouraged to go out on their doorsteps and sing Vera Lynn’s ‘We’ll 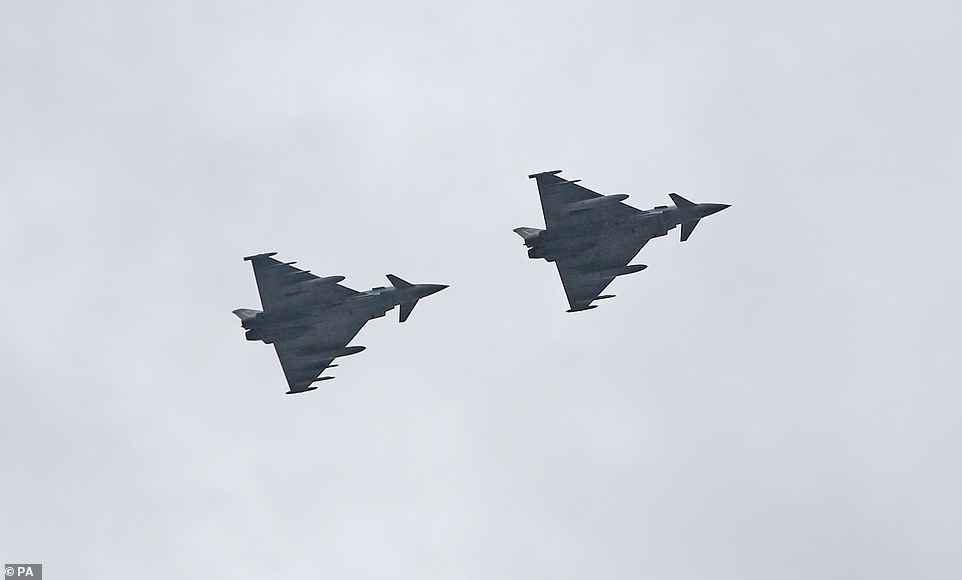 Two RAF Typhoons performing a flypast over The Titanic slipway in Belfast. On May 8, 1945, the Allied Forces of the Second World War celebrated the formal acceptable of surrender of Nazi Germany 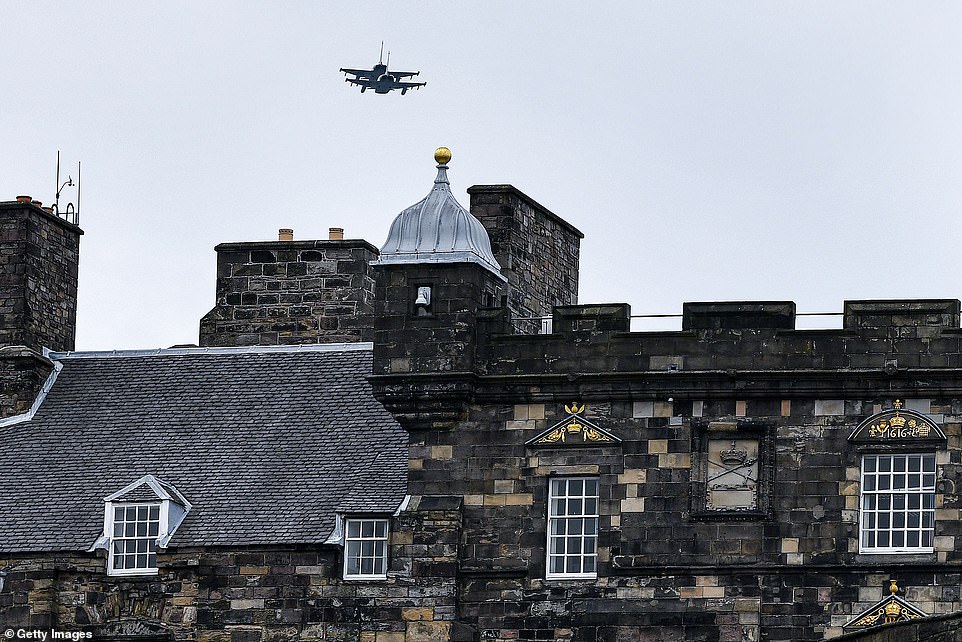 RAF Typhoons captured flying over Edinburgh castle to mark the 75th anniversary of VE Day in Scotland. The UK is commemorating the day with a pared-back rota of events due to the coronavirus lockdown

And while large-scale public events may not be able to go ahead, patriotic neighbourhoods battled on bravely, making the best of the situation by holding street tea parties and sharing pictures using the hashtag #StayAtHomeParty.

Up and down the UK Britons have been getting into the spirit of VE Day, which for this year has been designated as a public holiday.

Many are dressing up in 1940s attire, while bunting has been displayed outside homes, including at 10 Downing Street in London that houses the Prime Minister’s office.

People are also being encouraged to go out onto their doorsteps to sing Dame Vera Lynn’s iconic wartime anthem, ‘We’ll Meet Again’ – which has added resonance now as families and friends are separated by coronavirus lockdowns.

Prime Minister Boris Johnson, who lit a candle Thursday evening by the grave of the Unknown Warrior in Westminster Abbey in remembrance of those who gave their lives, wrote to veterans, describing them as ‘the greatest generation of Britons who ever lived.’

Prince Charles and his wife, the Duchess of Cornwall, led the country in a two-minute silence at the war memorial on the grounds of Balmoral Castle in Scotland. Charles laid a wreath of poppies on behalf of the nation. At the UK’s main memorial on Whitehall in central London, traffic ground to a halt as people observed the silence.

The tributes will continue through the day. The victory speech of Britain’s wartime prime minister, Winston Churchill, will be broadcast on BBC Television.

Queen Elizabeth II, at 94 a Second World War veteran herself, will speak to the nation at 9 pm, the exact time that her father, King George VI, addressed Britons 75 years ago.

Related posts:
Women Are Stressed as They Juggle a 'Double Double' Shift amid Coronavirus, Says Sheryl Sandberg
Netflix's 'Baby-Sitters Club' Adaptation Gets Premiere Date – Watch First Teaser Here (Video)
Popular News
Baseball legend Cal Ripken Jr. says his prostate cancer ‘could have been a much different result’ if he hadn’t been a sports star
22/09/2020
Man Utd wonderkid Ramon Calliste, called ‘the next Giggs’, now owns luxury watch business and makes £5m a year – The Sun
26/03/2020
Megan Thee Stallion Addresses Criticism Over Twerking: ‘I Love to Shake My A**’
26/03/2020
Police guard shops to stop coronavirus panic-buyers and enforce social distancing – The Sun
26/03/2020
Coronavirus: Good Morning Britain’s Dr Hilary reveals ‘game-changing’ self-testing kit
26/03/2020
Recent Posts
This website uses cookies to improve your user experience and to provide you with advertisements that are relevant to your interests. By continuing to browse the site you are agreeing to our use of cookies.Ok