Psychologist is jailed for life after bludgeoning to death bodybuilder

Psychologist is jailed for life after bludgeoning to death bodybuilder with a barbell to steal his £7,000 Rolex watch while he was distracted by his lover in ‘honeytrap’ killing

A psychologist who killed a bodybuilder with his own barbell in order to steal his £7,000 Rolex watch has been jailed for at least 32 years.

Christopher McDonald, 35, who gained a first class degree in psychology, was out on a life licence when he attacked Paul Tong, 54, who was known as ‘Yankee’, with an exercise weight at his home in Ealing, west London, on April 19 2017.

McDonald and his accomplice Aliysa Ellis, 31, had plotted to rob Mr Tong after catching sight of his designer clothes and the luxury timepiece which he kept in a box on his bedside table.

The killer had recruited Ellis, a criminology graduate, to act as a ‘decoy’ and keep the victim distracted as he worked his way into the flat.

However Mr Tong’s body was found the next day partially covered by bedding at a ‘contorted and unnatural angle’ and his room had been ransacked. 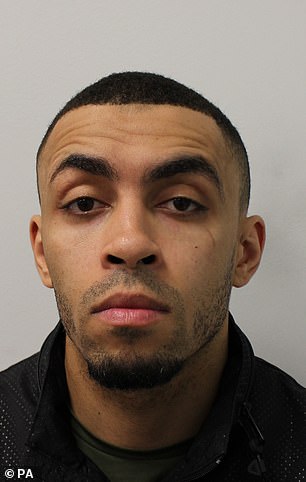 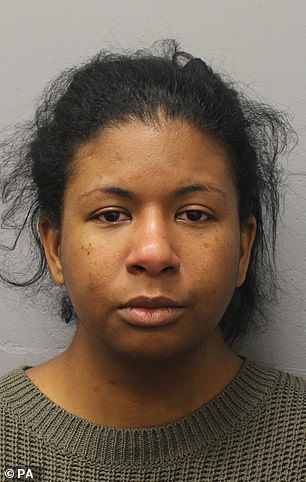 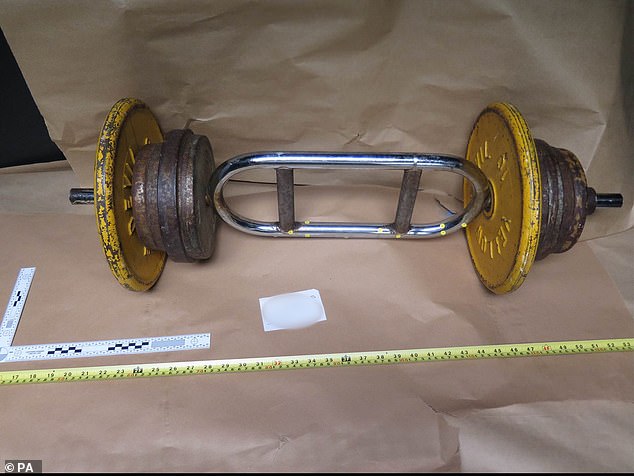 The court heard how McDonald attacked Paul Tong, 54, with an exercise weight (pictured) at his home in Ealing, west London in 2017

A post-mortem examination revealed that Mr Tong, who was of ‘muscular build’, had cuts and bruises on his head and body, broken ribs and a ruptured liver from ‘blunt impacts’.

Following a trial at the Old Bailey, McDonald from Croydon, south London, was found guilty of murder and conspiracy to rob.

Meanwhile his co-defendant Ellis, from Ealing, was found guilty of manslaughter and conspiracy to rob and jailed for 13 years by Judge John Hillen.

The pair first stood trial last year but the case was halted after Ellis breached her bail by going out for a night on the town and failed to attend court the next day.

McDonald, who once burgled his own grandmother while armed with a knife, was released from HMP Elmley on September 8, 2014.

Jacob Hallam QC, prosecuting, told how Ellis sent him a series of text messages when she was with Mr Tong.

Mr Hallam said:’It was rumoured that he had a substantial amount of money. The state of the room suggests that Mr Tong was killed by people who were seeking to find and take his money, his valuables and his drugs.

‘When the police searched the room after his death, they found neither drugs, nor valuables, nor any notes.’

He continued: ‘Ms Ellis was an associate of Mr Tong’s and she spent time with him on a number of occasions and on the day of his death.

‘Mr McDonald in contrast was not someone known to Mr Tong but was instead an associate of Ms Ellis.

‘Together, the Crown say, these defendants conspired to rob Paul Tong of the fruits of his criminality.

‘Together, having gained access to Mr Tong’s room on the night of 19 April 2017 the defendants put the conspiracy into effect and, in the course of doing, so subjected him to a blunt force assault, rupturing his liver and fracturing his ribs.’ 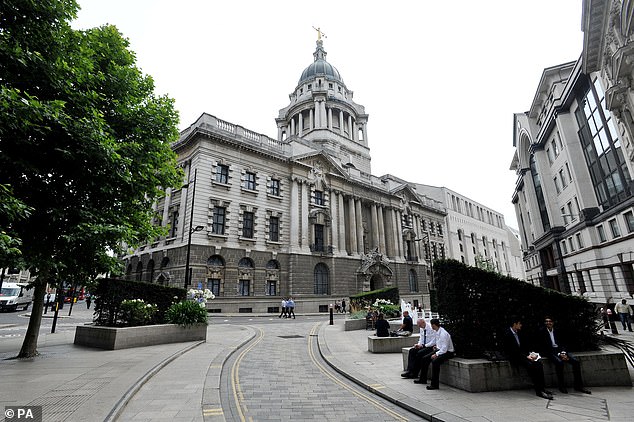 The pair, who first stood trial last year, were sentenced following a trial at the Old Bailey

Margaret Newman, a friend of Mr Tong, told police his room was ‘like an Aladdin’s cave and said he had ’12 pairs of designer sunglasses, belts and watches’ which were displayed around the room and another expensive watch on a teddy bear.

The victim’s family sat in the well of the court as their statements were read and the killers appeared via video-link from custody today.

‘All of [their statements] say the length of time the trial process has taken has been a cause of particular hardship to them in different ways and the family as a whole,’ the prosecutor said.

‘Neither of the defendants had the integrity or the decency to take responsibility for what they did and put the family through not one but two trials.’

Diana Ellis QC, defending Ellis, said that she was able to ‘facilitate’ the robbery through her history of casual sex with the victim but had not known deadly violence would erupt.

She acted as a ‘decoy’ for her accomplice but the QC said there was no evidence to suggest she was present at the time of the murder, having left the flat ten minutes before McDonald.

Ms Ellis said: ‘My lord has seen extensive psychiatric reports. It is clear from the recording made, the pocket call just after 9 o’clock, that Ms Ellis is telling Mr McDonald to leave.

‘She left the house certainly 10 minutes before Mr McDonald.

‘The clothing she was wearing didn’t have any pockets and she didn’t have a bag and all that may go to indicate her role after the departure.

‘One may note she is charged with conspiracy to rob rather than the actual joint robbery itself. There can be no doubt that she was extremely distressed by the events.

‘They (Ellis and Mr Tong) had casual sex on occasions and she was welcome in his house at this time.

‘It just looks to be on her point of view an offence she was able to facilitate because of her relationship with Mr Tong but not one she contemplated would lead to any serious harm.

‘If the jury had found she was present when McDonald was inflicting those injuries with the dung bell then surely they would have convicted her of murder.

‘It was an offence that was chosen rather than the robbery as a joint action.

‘We submit it would be wrong for her to be sentenced on the basis that she was present particularly when the evidence is that she had left before McDonlad and that there was nothing in her hands.

‘If she was there when the real violence and mayhem took place surely they would have convicted her of murder.

‘She did actually care for him and that when this awful event took place she was very troubled by it.

‘He (McDonald) needed someone to be a decoy. Someone has to get entry (to the flat). She says she herself has lost someone she loved deeply.’

Kerim Fuad, QC, defending McDonald, argued that the murderer stood a chance of reforming himself after release from prison ‘albeit as a much older man.’

Mr Fuad said: ‘His behaviour throughout the trial has been, I submit, impeccable and courteous.

‘The minimum term will place him in or close to his 70s before he can ask for parole.

‘He’s a father of three young children. As an individual he can positively contribute to society.Albeit as a much older man.’

Judge John Hillen, sentencing, said the victim had been a drug-dealer with a criminal past but was ‘much-loved’ by friends and family including his aunt with whom he lived.

The judge said: ‘What really happened in that room on the evening of 19 April 2017 we may never really know unless one or both of you choose to reveal that.

‘Paul Tong was a drug user and drug dealer. In the past he had been a thief and burglar and had served time in prison. But whatever his past, whatever it was that he was engaged in at the time of his death, he was someone who was a much loved character.

‘A son, a father and a grandfather. And the most beloved nephew of Jocelyn Poole who looked after him as if he was her own and who wrongly of course feels guilt that she could not protect him from you, who took away his life.

‘Despite his lifestyle he was an intelligent and highly entertaining man with a gift for friendship.

‘You, Aliysa Ellis, were his friend and his lover. He trusted you, and you betrayed him.

‘You were the person who knew where he kept his drugs and his money in his room, you knew he had valuables there, and in order to fund your own addiction and support your disordered lifestyle you decided to steal from him.

‘Because of the level of security employed, although unsophisticated, stealing from him by way of a burglary in his absence or by a sneak thief, was not possible. The method had to use force or threat of force to him in his own home – a robbery.

‘He was a strong and fit man and would easily have dealt with threats of violence from you Aliysa Ellis. You needed a strongman who was not afraid to back up threats with use of force, which was, as it turns out… lethal.

‘There’s no evidence that you Christopher McDonald knew Paul Tong, on or before that evening.

‘But that brute force must have included an intention to do harm. Because of Paul Tong’s strength you must have thought would involve considerable force.

‘You Aliysa Ellis ensured Paul Tong was alone and allowed you, Mr McDonald, to trick your way into his bedroom. It should not be forgotten that in that house was a vulnerable person, Ms Poole, the victim’s elderly and infirm aunt.

‘Having got into the house and into Paul Tong’s bedroom, what happened was a violent struggle in which you, Mr McDonald, took up the weights and with an intention to do really serious bodily harm used them to crush his ribs, causing the internal bleeding and organ damage which led to his death.

‘As he lay dying, you emptied the room of everything of value you could find.

‘You Aliysa Ellis are a thoroughly callous person. Having returned to the address, you must have found him dead or dying. You failed to summon any medical assistance or to help him in any way.

‘I’ve described you Christopher McDonald as a violent criminal. Violent and dangerous you certainly were.

‘You’ve now been returned to serve your indeterminate sentence. You were unreformed, greedy, selfish and arrogant and prepared to use violence to secure your ends.

‘You had no regard for others, whether it was the women you used or the victims of your crimes.’