Profits in nursing homes in ‘weak relationship’ to quality of care: report

A study commissioned for the aged-care royal commission shows most of Australia's for-profit nursing home companies make healthy profits but there is a weak relationship between the level of profits and quality of care.

The royal commission is under pressure from nursing home providers to recommend a substantial increase in government funding to the sector, but a report by international consulting firm BDO shows the industry's income in Australia had risen faster than its expenses over the past 10 years.

Across the sector, including home care and residential care, the industry made $1.1 billion in profit in 2018 on total income of $25 billion, with an average profit margin of about 5 per cent. 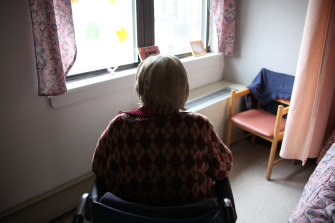 Aged care companies make profits in Australia, but does it translate to good care?Credit:Alamy

The sector's income had risen by 6.7 per cent per year since 2009 – significantly higher than the rate of inflation – and costs had risen by 6.4 per cent, the report found.

The Royal Commission into Aged Care Quality and Safety commissioned the report in an attempt to understand the financial state of the sector. But the consultant it commissioned, BDO, complained that even the confidential Health Department data it used to produce the report lacked transparency because nursing home companies had limited reporting obligations and complex corporate structures. This meant cash transfers in the form of interest payments, management fees and rent could be used to shuffle money between entities within a corporate group, making the industry’s overall financial performance unclear.

"The current [aged care] model favours more sophisticated providers who have the necessary financial acumen to manage diverse portfolios and capital structures" the report said. "A lack of governance and transparency on the entities within the group, however, increases risk of loan recoverability and understanding of returns."

Home-care providers were not required to report at all.

It was also unclear how much additional government funding, or profits, translated into better care. "A possible issue with this relatively complex model is that it arguably weakens the link between the drivers of [financial] return and the quality of aged care service provided," the report said.

The federal government's funding model, which gives a home more money as residents get sicker, also showed a "weak relationship" between extra funding and extra care. "There is no direct driver between care needs and care expenditure," the report found, and a company's profitability also had "low correlation" with quality of care. For-profit providers reaped $16 per resident per day more than not-for-profits in government funding.

Another "key driver of value" for the nursing home companies was the use of bonds, or Refundable Accommodation Deposits, which are paid up-front by incoming residents and then repaid when they leave or die. For-profit nursing homes generally reaped more from residents ($188,000 per resident) in deposits compared to non-profit homes ($138,000) and government-run homes ($69,000). However, the report found it was difficult to tell how nursing homes were using the billions of dollars collected.

"If [Refundable Accommodation Deposits] have been used to make an investment … it is difficult to determine how much was invested, for how long and for what return."

About 74 per cent of companies were profitable and 13 per cent did not make a profit. Net profits after tax were about 5 per cent for the average nursing home company and returns on equity were more than 15 per cent.

However, to properly know the state of the industry, more transparency was required.

"Given the significant effort required to analyse the data for this report, the ability to readily produce a reliable, consistent set of data as the ‘source of truth’ is likely to increase the efficiency of any future analysis and reduce risk," the report said.

Related posts:
Crown Princess Victoria shares a loved up photo with her husband
Incredible Conor McGregor throwback picture emerges from 2008 MMA debut with clean-shaven UFC star having NO tattoos
Popular News
Ferne McCann gets whole house cleansed before hosting belated 30th party with Sam and Billie Faiers
20/09/2020
Man Utd wonderkid Ramon Calliste, called ‘the next Giggs’, now owns luxury watch business and makes £5m a year – The Sun
26/03/2020
Megan Thee Stallion Addresses Criticism Over Twerking: ‘I Love to Shake My A**’
26/03/2020
Police guard shops to stop coronavirus panic-buyers and enforce social distancing – The Sun
26/03/2020
Coronavirus: Good Morning Britain’s Dr Hilary reveals ‘game-changing’ self-testing kit
26/03/2020
Recent Posts
This website uses cookies to improve your user experience and to provide you with advertisements that are relevant to your interests. By continuing to browse the site you are agreeing to our use of cookies.Ok