‘Get vaccinated or I’ll arrest you and inject it in your butt’: President Duterte tells Filipinos to leave the country or face consequences if they don’t get Covid jabs

The president of the Philippines has threatened to arrest and forcibly inject Filipinos who refuse to get the Covid-19 jab amid reports of vaccine hesitancy.

Rodrigo Duterte, who is known for his public outbursts and brash rhetoric, told Filipinos to leave the country if they will not cooperate with efforts to end the public health emergency.

In televised remarks on Monday evening, he said he has become exasperated with people who refuse to get immunised then help spread to coronavirus.

The president, 76, even went as far as to threaten to arrest and forcibly inject people who refuse the vaccine, saying he would order village leaders to compile a list of defiant residents. 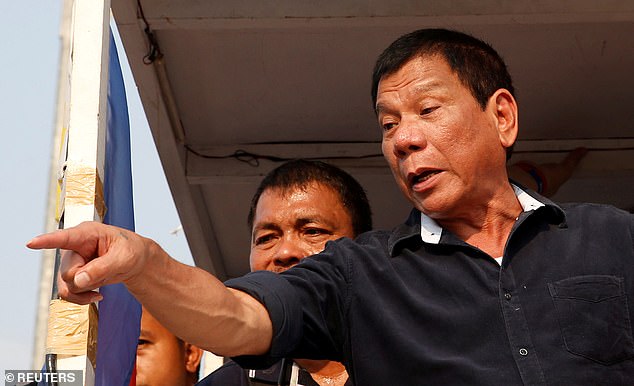 President Rodrigo Duterte (pictured), who is known for his public outbursts and brash rhetoric, told Filipinos to leave the country if they will not get the Covid-19 vaccine

He said: ‘Don’t get me wrong. There is a crisis being faced in this country. There is a national emergency.

‘If you don’t want to get vaccinated, I’ll have you arrested and I’ll inject the vaccine in your butt.

‘If you will not agree to be vaccinated, leave the Philippines. Go to India if you want or somewhere, to America.’

His comments were at odds with those of his health officials, who have insisted that while people are urged to receive the Covid vaccine, it is voluntary.

Justice Secretary Menardo Guevarra acknowledged on Tuesday that there was no Philippine law criminalising refusal to get vaccinated against coronavirus.

‘I believe that the president merely used strong words to drive home the need for us to get vaccinated and reach herd immunity as soon as possible,’ Guevarra said. 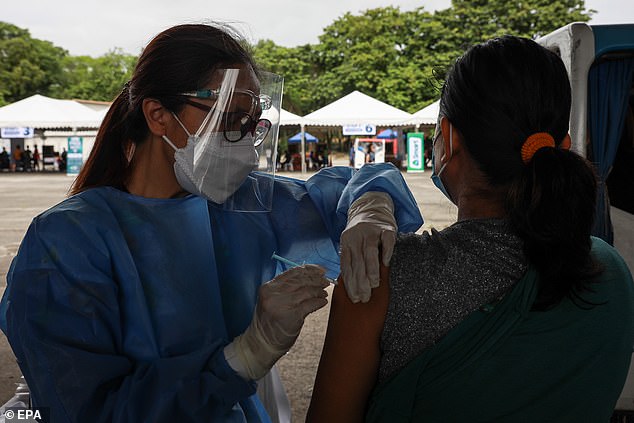 In televised remarks on Monday, he said he is exasperated with people who refuse to get the vaccine then help spread to coronavirus. Pictured: A woman gets Sinovac Covid jab in Manila 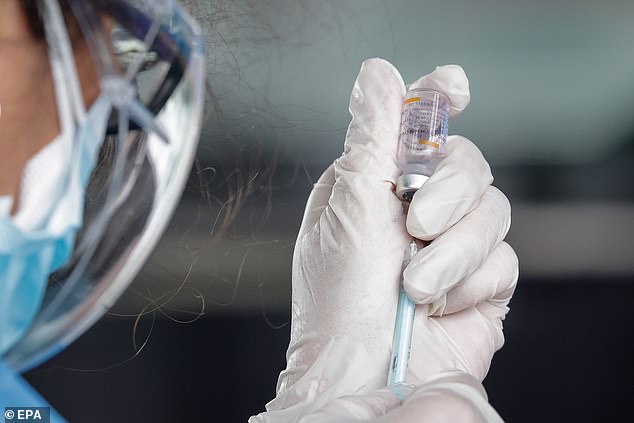 His comments were at odds with health officials, who have said that the Covid vaccine is voluntary. Pictured: A health worker prepares a dose of China’s Sinovac vaccine in Manila

Human rights lawyer Edre Olalia raised concerns over Duterte’s threat, saying he could not order the arrest of anybody who has not clearly committed any crime.

Duterte and his administration have already faced criticism over the vaccination campaign, which has been saddled with supply problems and public hesitancy.

After repeated delays, vaccinations got underway in March, but many still opted to wait for Western vaccines, prompting some cities to offer snacks and store discounts to encourage people to get immunised.

Duterte blamed the problem on Western countries cornering vaccines for their own citizens, leaving poorer countries like the Philippines behind. Some officials said the bigger problem was inadequate vaccine supply more than public hesitancy.

Duterte, who has been criticised for his tough approach to containing the virus, has also gone back on an earlier remark that only required people to wear plastic face shields over face masks in hospitals as an added safeguard.

After experts briefed him on the threat of more contagious coronavirus variants, Duterte instead made it mandatory for people to wear face shields indoors and outdoors.

As of June 20, Philippine authorities had fully vaccinated 2.1 million people, making slow progress towards the government’s target to immunise up to 70 million people this year in a country of 110 million.

The Philippines is a Covid-19 hotspot in Asia and has currently recorded more than 1.3 million infections and at least 23,749 deaths. 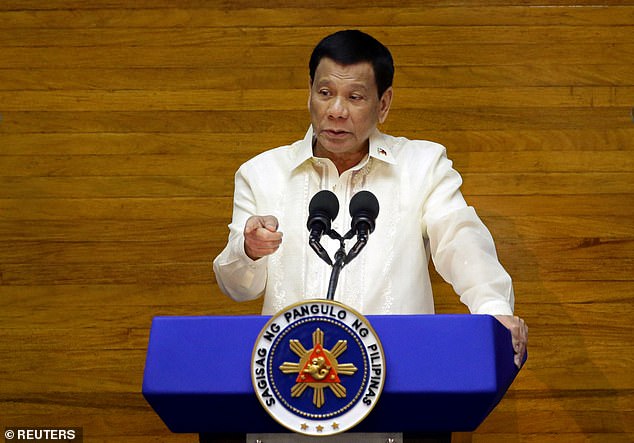 The president (pictured), 76, even threatened to arrest and forcibly inject people who refuse the vaccine, saying he would order village leaders to compile a list of defiant residents 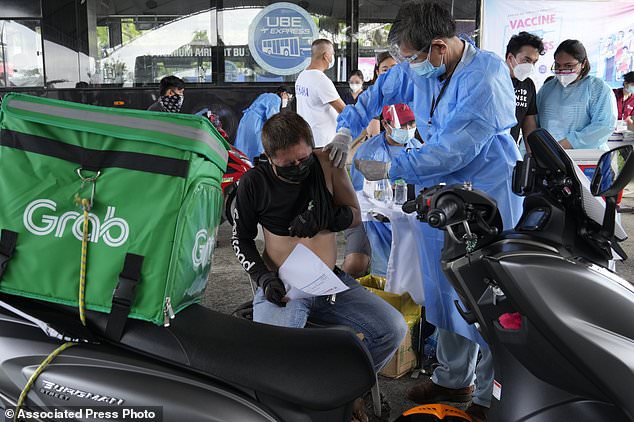 Duterte has faced criticism over the vaccination campaign, which has been saddled with supply problems and public hesitancy. Pictured: A motorcycle delivery driver is inoculated

Over the weekend, the government signed a supply agreement for 40million doses of the Covid vaccine developed by Pfizer Inc and BioNTech SE, in its biggest coronavirus vaccine deal to date.

Deliveries of the vaccine will begin in late September, Carlito Galvez, head of the government’s Covid-19 vaccine procurement, confirmed on Sunday.

It ‘will significantly boost our national immunisation programme and will enable us to realise our goal of achieving herd immunity by year-end,’ he added.

So far, the Philippines has administered slightly more than eight-million doses, of which about six-million were first doses.

Earlier this month, the country started a programme to vaccinate 35million people working outside their homes, while continuing to inoculate priority sectors such as healthcare workers and the elderly.

To help boost the government’s Covid response, a team of medical experts from the Israel Ministry of Health has arrived in the capital city. Galvez said the health experts will share strategies, including how to address vaccine hesitancy.

The Philippines will also allow the Pfizer-BioNTech vaccine to be given to children aged 12 to 15, possibly starting later this year, he added.

But Duterte is continuing to stand by his decision not to let schools reopen despite fears of a ‘learning crisis’, he also confirmed in his address on Monday. 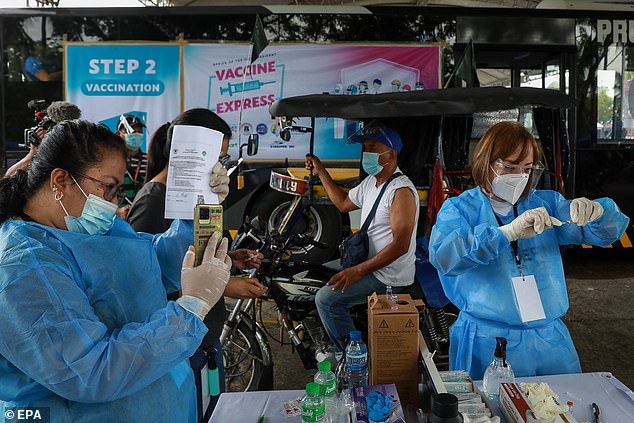 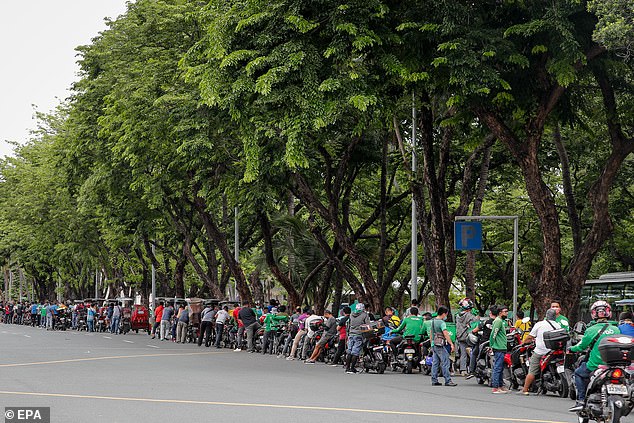 As of June 20, Philippine authorities had fully vaccinated 2.1 million people. Pictured: Delivery riders and tricycle drivers line up for Covid vaccine in Manila on June 22 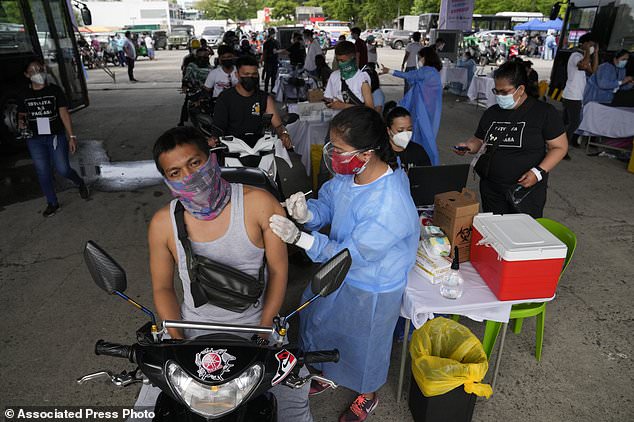 The government’s target is to immunise up to 70 million people this year in the country of 110 million. Pictured: A motorcycle rider is inoculated with China’s Sinovac Covid-19 vaccine

The president continued with the yearlong shutdown of schools due to concerns students could infect elderly relatives, and he only plans to lift these restrictions when vaccinations are widespread.

In the same address, he took a swipe at the International Criminal Court, after an ICC prosecutor sought permission from the court for a full inquiry into the drug war killings in the Philippines.

Duterte, who in March 2018 cancelled the Philippines’ membership of the ICC’s founding treaty, repeated he will not cooperate with the probe, describing the ICC as ‘bullshit’.

‘Why would I defend or face an accusation before white people. You must be crazy,’ Duterte said, who after winning the presidency in 2016 unleashed an anti-narcotics campaign that has killed thousands.

Sought for comment, ICC courtspokesperson Fadi El Abdallah said: ‘The Court is an independent judicial institution, and does not comment on political statements.’