Police marksman kills dog after he bites his owner, 35, to death

Police marksman kills dog after he bites his owner, 35, to death following his collapse with epileptic fit

A police marksman killed an ‘aggressive’ dog after he bit his owner to death and refused to leave his side during an epileptic fit.

Jonathan Halstead, 35, died inside his home in Shaw, near Oldham, after Bronson became ‘unusually distressed’ and bit him several times when he suffered a seizure in January.

The Staffordshire Bull Terrier and Bull Mastiff cross caused ‘severe neck injuries’ to Mr Halstead, before dragging his owner under the bed and ‘acting aggressively’ towards paramedics and his father Richard when they tried to approach.

Following a standoff, a firearms officer was called to the home Mr Halstead shared with his parents in Greater Manchester and Bronson was eventually shot.

Engineer Mr Halstead died before he could be taken to hospital, where tests showed his death was the result of bite wounds inflicted on his neck by the dog.

His father Richard told an inquest in Heywood that he doesn’t believe Bronson, who ‘in general had a good temperament’, had ‘wanted to hurt Jonathan’. 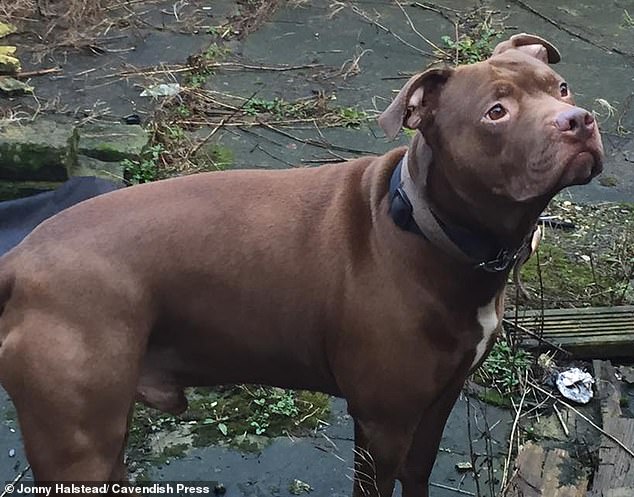 Jonathan Halstead, 35, died inside his home in Shaw, near Oldham, after Bronson (pictured) became ‘unusually distressed’ and bit him several times during a seizure in January

Recalling the events, he described how he heard a ‘tremendous bang’ on January 29 as he and his son were preparing to take a trip into Shaw.

He said: ‘I was in my room getting dressed … and I just heard a tremendous bang and my immediate reaction was Jonathan had had a fit although I think I knew immediately something was different about it.

‘He was lying absolutely straight absolutely still on the floor. Usually if Jonathan had a fit Bronson used to bark at him and try get a response from him and previously I found the least problematic way was just to let Bronson bark rather than interfere as it seemed to wind him up more.

‘However on this occasion Bronson seemed unusually distressed and was trying to pull Jonathan under the bed.

‘I don’t think his motive was necessarily to do any harm but I couldn’t get Bronson to come away as he just wanted to stay with Jonathan.’

Mr Halstead then called police and paramedics, before heading back upstairs to find Bronson ‘lying down by Jonathan’s side’ and licking his chest.

He added: ‘He showed aggression again if I moved into the room. 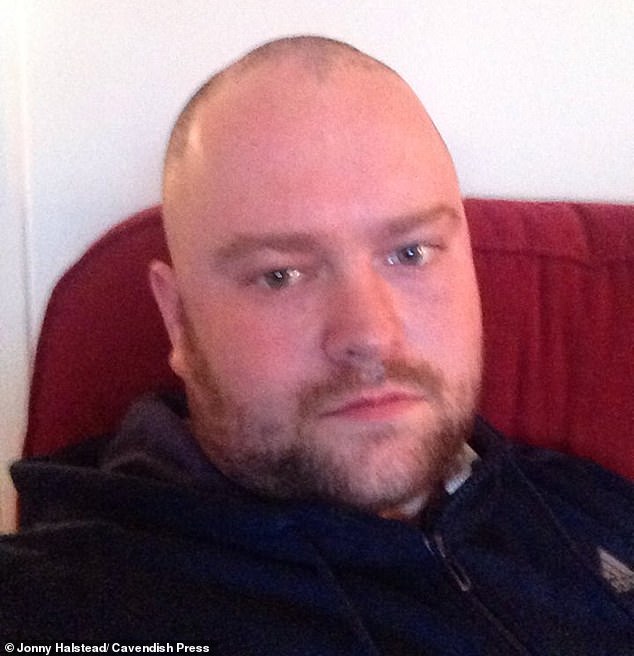 Pathologist Dr Sami Titi said the medical cause of Mr Halstead’s (pictured) death was a severe neck injury and dog bites, contributed to by epilepsy

‘I don’t think Bronson wanted to hurt Jonathan – my feeling is Jonathan was already dead at that moment. That’s the truth.

‘But I couldn’t get in the room none of us could get into the room to get to move Jonathan. Bronson was being so protective and wouldn’t let anyone near him.

‘My impression was that Jonathan was dead before he was bitten. It was just the way he fell and the weight of his fall and loudness of his crash onto the floor made me think that.

‘It’s been a very horrific experience for the whole family and I am sure for the police, officers and the paramedics who came.

‘I would just like to record my gratitude for the way in which they responded and for their kindness and consideration at all times since then.’

The inquest heard Mr Halstead had suffered epilepsy since he was ten and had adopted Bronson when he was a puppy in 2013.

Police inquiries revealed he had previously owned another smaller dog, Sasha, who had been put to sleep in 2018 following an attack on her by Bronson.

Officers investigated that incident but at the time Bronson was not deemed to pose a ‘wider risk to public safety.’

Detective Inspector Kenneth Blain of Greater Manchester Police said: ‘One of the officers who had been upstairs to see Jonathan in the bedroom saw Bronson in the bedroom acting aggressively.

‘He was not able to get to Jonathan in the bedroom and asked for firearms officers to assist. Nobody could get into that room.

‘Officers had tried to distract the dog with food and commands but ultimately to remove that threat Bronson had to be shot by the firearms officer.’

Pathologist Dr Sami Titi said the medical cause of Mr Halstead’s death was a severe neck injury and dog bites, contributed to by epilepsy.

She added: ‘Jonathan had a long-standing history of epilepsy and suffered seizures on and off in varying degrees and varying times throughout his life and in the main they seemed to be controlled by his medication.

‘But even with medication, he was prone at times to having some seizures. The fact is this seemed to be a different type of seizure and Jonathan sustained a severe neck injury following an attack from Bronson who thought he was just being over-protective of him.’

Related posts:
Ministers claim they were in the dark as hotel quarantine program went wrong
Mums bag Elf surveillance cameras for 50p in B&M and say it’s the secret to getting kids to behave
Popular News
GoFundMe for ‘Borat 2’ babysitter exceeds $100,000 fundraising goal in 4 days
29/10/2020
Man Utd wonderkid Ramon Calliste, called ‘the next Giggs’, now owns luxury watch business and makes £5m a year – The Sun
26/03/2020
Megan Thee Stallion Addresses Criticism Over Twerking: ‘I Love to Shake My A**’
26/03/2020
Police guard shops to stop coronavirus panic-buyers and enforce social distancing – The Sun
26/03/2020
Coronavirus: Good Morning Britain’s Dr Hilary reveals ‘game-changing’ self-testing kit
26/03/2020
Recent Posts
This website uses cookies to improve your user experience and to provide you with advertisements that are relevant to your interests. By continuing to browse the site you are agreeing to our use of cookies.Ok