An incredible collection of photographs depicting a decorated British tank captain alongside Cossaks during the Russian Revolution has come to light after being uncovered in a garden shed 100 ears later.

The black and white snaps were taken by Captain Reginald Shaw MBE, who served with the White Russians during the revolution in 1919 and 1920.

The pictures were discovered after the captain’s old wooden transit chest was found in the garden of a recently deceased relative.

The collection of photos was found alongside Captain Shaw’s uniform and pocket book and the entire contents of the chest are set to be auctioned by Bosleys in Marlow, Buckinghamshire. 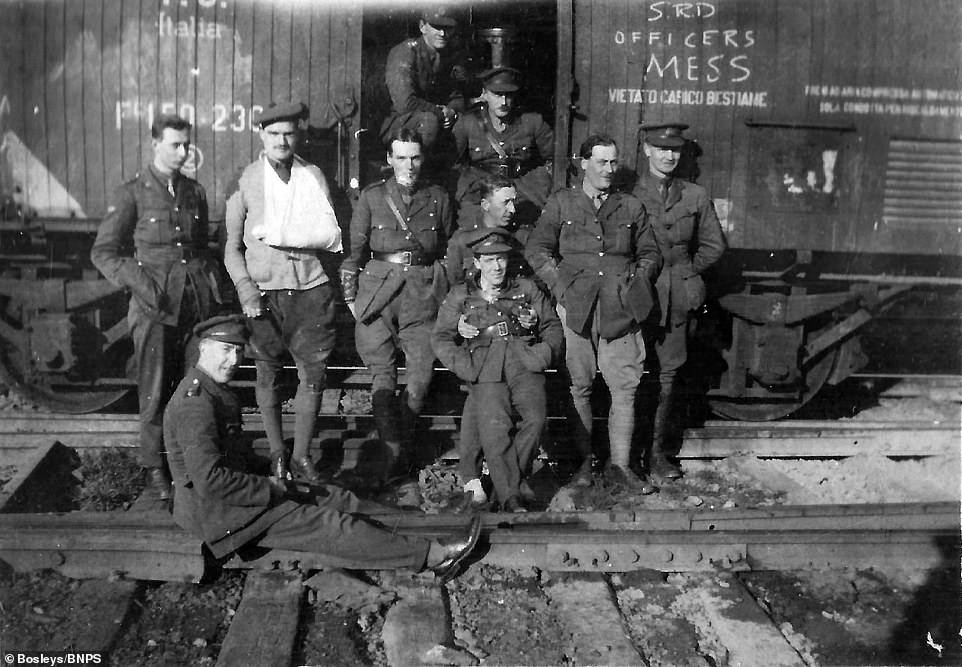 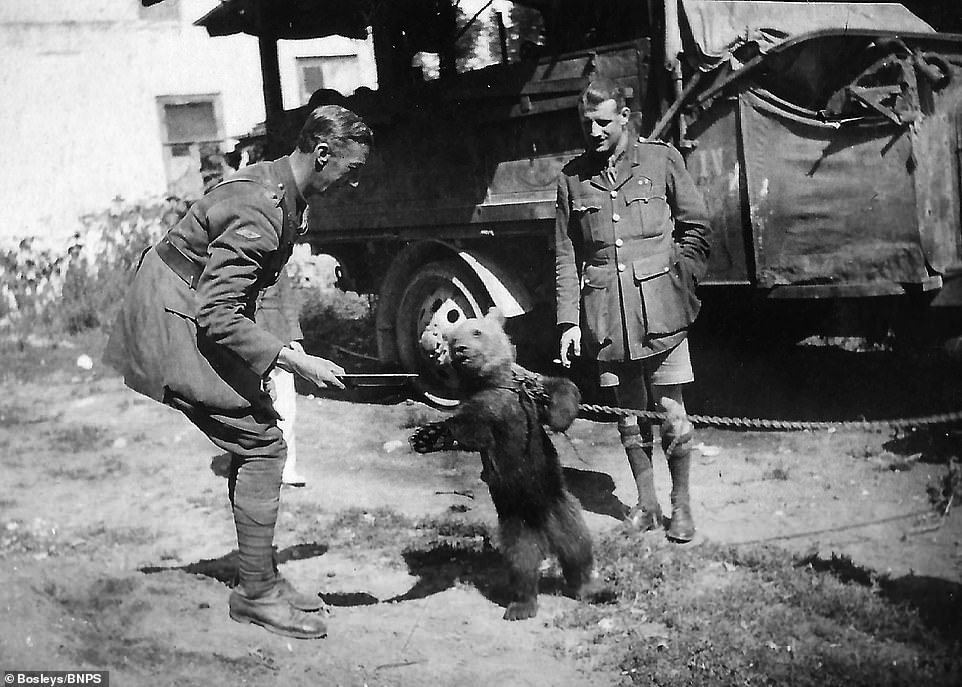 In this black and white photograph a bear with a chain tied around its neck dances for the amusement of two officers stood next to a transport vehicle. The photo was taken during the Russian Revolution when British forces were sent to support the White Russian soldiers 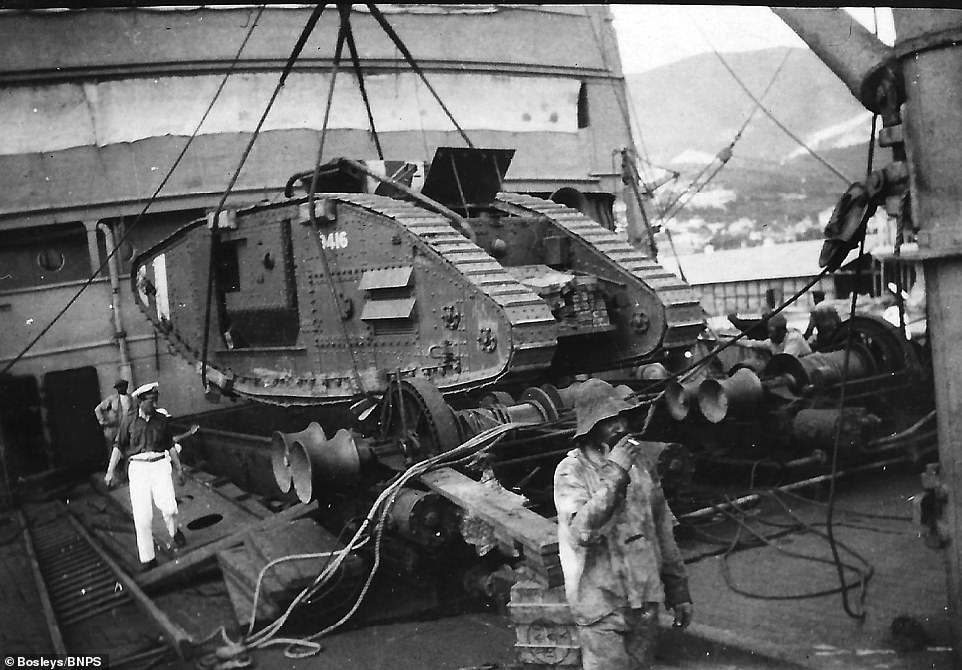 A tank is unloaded from a transport ship in South Russia in 1919 as British forces prepared for to support Tsarist forces against the red Russian revolutionists. The photos were uncovered almost a century later in a garden shed 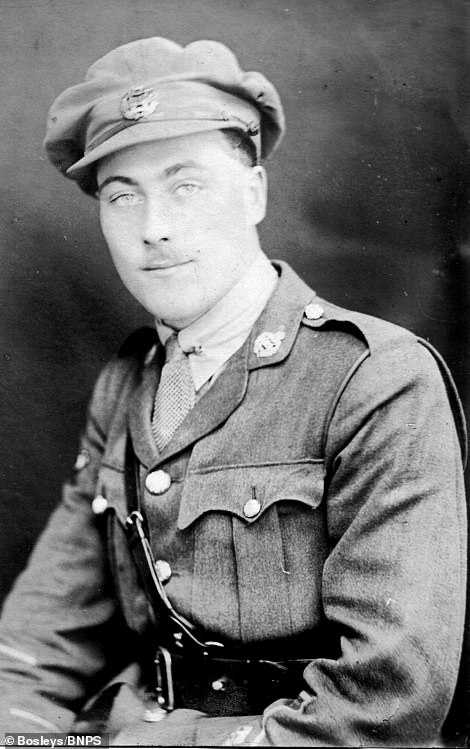 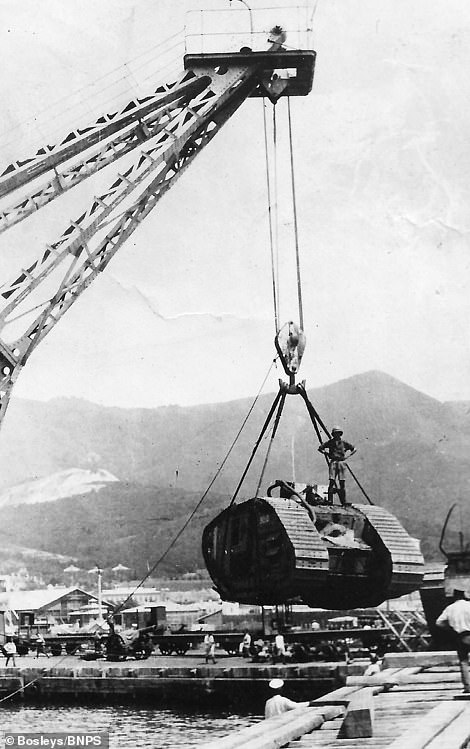 Captain Reginald Shaw MBE (left) took the photographs while serving as an instructor in the British Tank Corps between 1919 and 1920 when they joined the South Russia expedition. They served alongside White Russian soldiers loyal to the Tsar fighting against the red Bolshevik revolutionists. Pictured right: A tank is lifted by a crane while an officer stands on top

Bernard Pass, auctioneer at Bosleys, said: ‘When you consider this uniform, documents and photographs had laid dormant in Captain Shaw’s military uniform trunk for over 100 years, many of those years in a shed, it remains a remarkable find.

‘The rare connection with the British South Russian Expeditionary Force of 1919 which was to give aid to the Imperial White Russian Army during the Russian Civil war has created an international interest.

‘We’d had inquiries coming as far a field as the United States and the Russian Federation.’

The picture collection includes a portrait of Captain Shaw dressed in his military uniform and another snap of a tank being lifted into the air by a crane with an officer stood on top.

Another picture shows a soldier dancing alongside a small bear that has a chain wrapped around its neck.

Captain Shaw was involved in the first tank battle at Amiens on September 15, 1916, while he was serving with the 12th Battalion in the First World War – a year later he was commissioned into the Tank Corps.

Following the end of World War One, Britain sent forces to Russia to help the White Russians in the Bolshevik revolution.

Captain Shaw joined the South Russia expedition as an instructor in March 1919 and resigned his commission a year later after receiving the MBE, Russian Order of St Vladimir and Order of St Anne.

He later settled in Staffordshire and during World War Two served with the Stone Fire Service before being commissioned into the Royal Air Force Volunteer Reserve.

The sale of the photos, which are expected to fetch £200, will take place on Wednesday.

What was Britain’s involvement in the Russian Revolution?

Britain, France and the United States supported the White Russian army during their bloody war with Lenin’s Bolshevik Red army between 1918 and 1920.

100,000 Allied troops were present in Siberia in March 1919, with British forces making up around 1,800 men – or two infantry battalions.

Churchill, the most prominent supporter of the campaign, told the British parliament: ‘I think the day will come when it will be recognised without doubt, not only on one side of the house, but throughout the civilised world, that the strangling of Bolshevism at its birth would have been an untold blessing to the human race.’

The British were engaged in a series of small brutal battles with the enemy before evacuating from Archangel and Murmansk in late 1919. These two locations set up

All Allied forces withdrew from Russia in 1920 after a decision was made at the Paris Peace Conference for all Allied forces leave Russian territory. This led to the eventual defeat of the White Russians and the overthrowing of the ruling Tsar.