Petrol station worker SPITS at customer in row over hygiene

This is the shocking moment a petrol station worker spits at a customer and threatens him with a bat after he raised hygiene concerns amid the coronavirus crisis.

In a shocking video, filmed at a BP garage in Coventry on Wednesday, the shopper, wearing a hi-vis jacket, can be seen having an argument with an employee as he goes to pay.

The customer says: ‘I need gloves…I don’t want to touch germs from dirty people…you are a company, supply f*****g gloves.’

Tensions continue to escalate and the shopper tells the worker: ‘People like you gave us this virus,’ before the cashier responds by throwing the man’s card to the ground.

After picking it up, the man then pushes dozens of chocolate bars off a nearby stand onto the floor, and turns round to say ‘don’t chuck my card’.

As he leaves the store, the other man runs out from behind the counter, carrying a baseball bat, and tries to open the door, which is being held shut from the other side by the same customer. 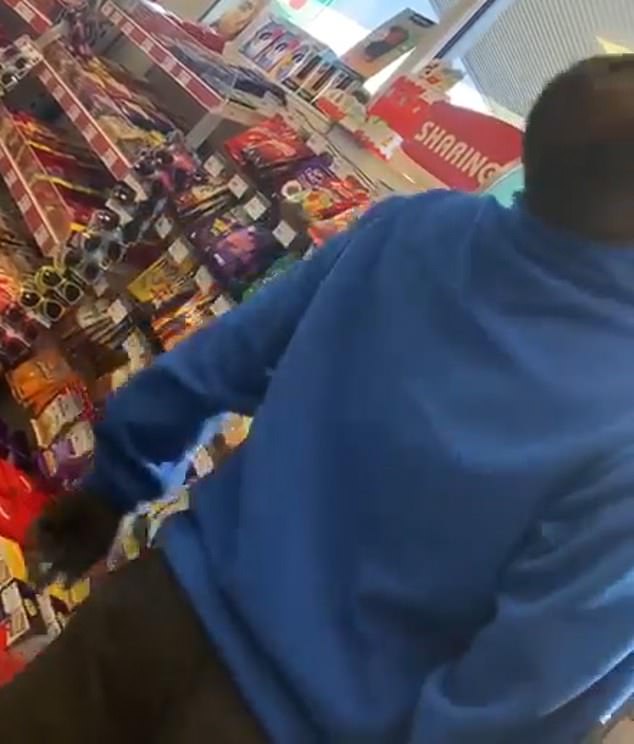 A petrol station worker appears to spit at the shopper, pictured, in a video which has been viewed more than 95,000 times 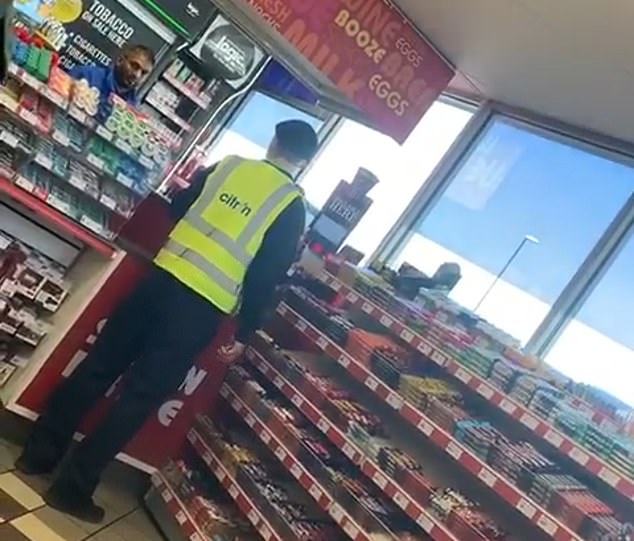 The pair had clashed, pictured, over hygiene concerns, with the shopper saying: ‘I need gloves…I don’t want to touch germs from dirty people…you are a company, supply f*****g gloves’ 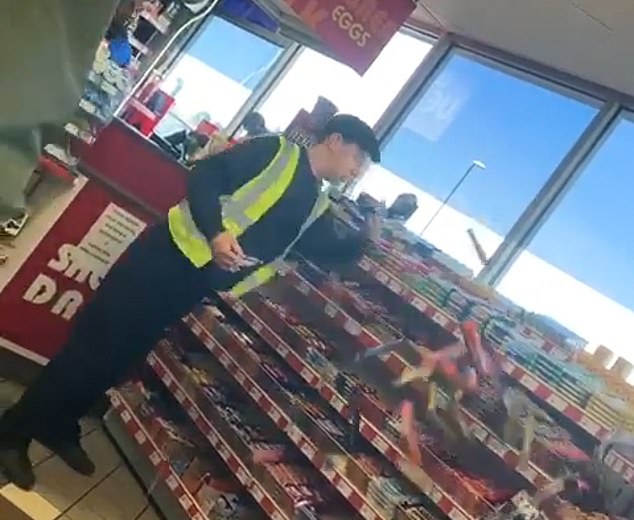 After the member of staff threw the customer’s card to the floor, he responded by pushing over dozens of chocolate bars, pictured 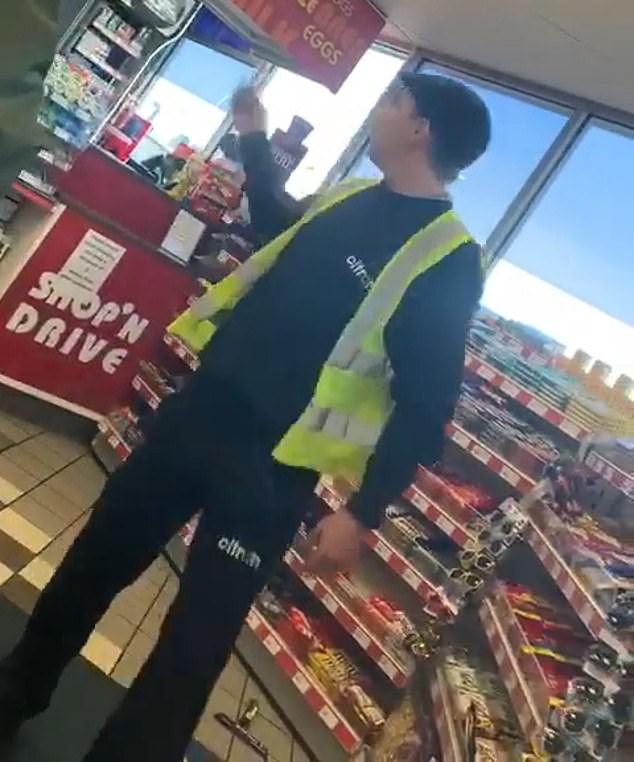 As he heads for the door, the man turns round to tell the employee: ‘Don’t chuck my card’

The pair then continue to hurl insults at each other before he finally manages to open the door and raises the bat above his head before appearing to spit at the shopper.

The worker again lifts up the bat and says: ‘I want to slap him on the head’ as the customer appears to be in discussion with others on the forecourt out of shot at the end of the two-and-a-half minute long clip.

The video, captioned: ‘Only went in for diesel, nearly had a Mars Duo take my head clean off’, has been viewed more than 95,000 times since being uploaded to Facebook on Wednesday, 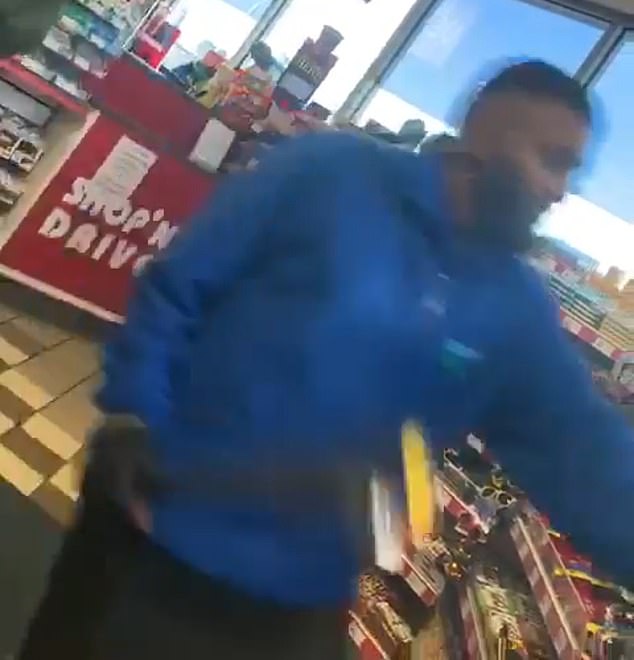 The cashier runs after him, holding a bat, in front of shocked customers, with one telling MailOnline: ‘I’ve never seen anything like that’ 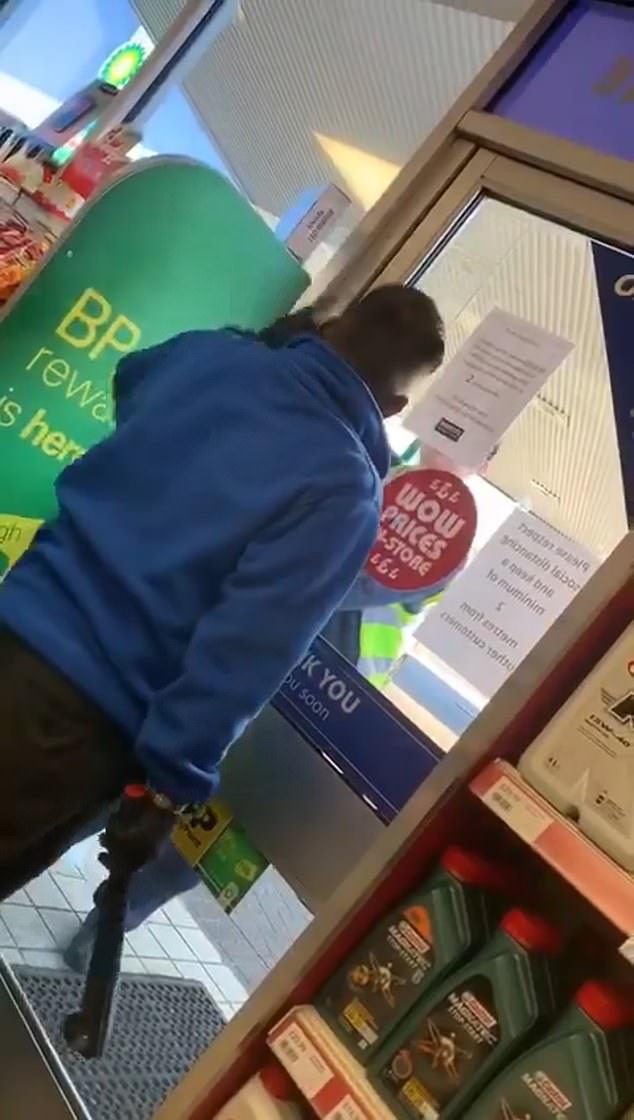 The pair can be seen continuing to argue, pictured, in the clip, filmed at a BP garage in Coventry on Wednesday 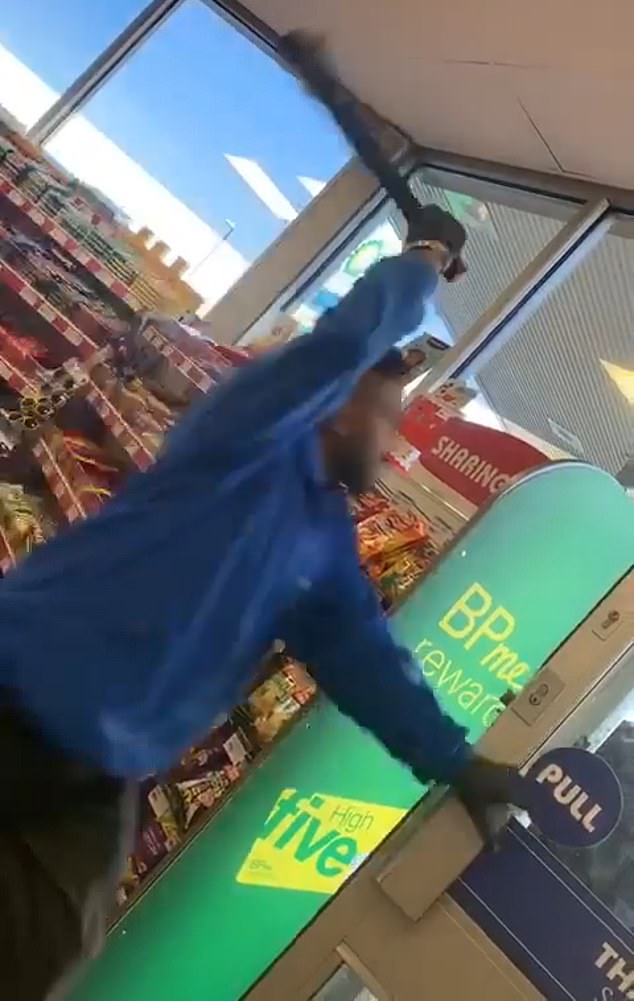 As tensions continue to escalate, the employee raises the baseball bat above his head while moving towards the shopper

The man who filmed the clip, who asked not to be named, told MailOnline: ‘I’ve never seen anything like that before, that’s why I had to start filming it.

‘I think everyone who was in the garage was in shock and didn’t realise quite what was going on.

‘I can see it from both sides of the argument, the garage probably should be providing gloves given everything that’s going on, but the guy was just saying they didn’t have any and were trying to stay open.

‘Everyone is a bit on edge at the moment, so maybe something small can escalate quite quickly.’

A comment from Matthew Lerigo, seemingly the customer involved, reads: ‘Sorry to the chocolate and people who were affected in this video. I only asked for gloves at first to fill up my van, he didn’t care about gloves.

‘I hurt the chocolate cause he threw my fuel card back at me. But to try and spit at me is just low. Dirty little bugger.’

Staff at the garage in Lockhurst Lane told MailOnline there was nobody available to discuss the incident.

Rontec, which owns and staffs the site, has also been approached for comment.