The main responsibility for the storming of the Capitol lies with President Donald Trump and his gang but the rise of paranoia in the right-wing US media has also played a poisonous role.

The rioters were egged on by these US publishers who amplified Mr Trump's false claims that the election had been stolen and it could be overturned by a vote in Congress. 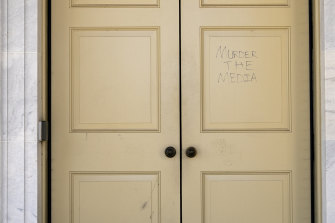 “Murder the Media” is scrawled on a door in the US Capitol building after Trump supporters rioted.Credit:Bloomberg

The split between an aggressively right-wing media and what some call the "liberal"-dominated mainstream media underlies much of the divisive politics of the Trump era.

Mr Trump rode to power in part thanks to support from Rupert Murdoch's Fox News. More recently, other news sources such as Breitbart and OneAmerica news networks have joined in and taken even more extreme positions – especially on racial, climate and cultural politics. They have undermined the US response to COVID-19 which they said was a hoax.

But this "media ecosystem", as former president Barack Obama called it – which includes the media companies themselves and a group of attached politicians – has played an especially crucial role since the November 3 election by telling their tens of millions of viewers and readers the lie that their candidate had not lost.

They peddled "a fantasy narrative" and claimed that those who disagreed in the mainstream media were all part of the elite conspiracy.

Allegations of conspiracy are an almost essential element of the "paranoid style in American politics", to use the title of the prescient essay by US academic Richard Hofstader from 1964.

Rather than accept that reality is against them, those on the right who have a sense of entitlement or grievance invent a small but fiendishly clever cabal to blame for their problems.

The right-wing media is perpetually unmasking this elite. To do so plausibly, however, they must pretend they are actually journalists themselves. Hofstader said paranoid politics was characterised by "heroic strivings for evidence to prove that the unbelievable is the only thing that can be believed".

In the past few months, their programming has been full of nonsense about stolen ballots, disappearing voting machines, and corruption by dozens of Republican officials against the interests of their own party. The right-wing media wrote the stories and Mr Trump and his friends retweeted them and amplified them in diatribes from the podium at their rallies.

There have been some encouraging signs, however, over the past couple of days since the events at the Capitol, that the right-wing ecosystem in the US is eating itself or at least fragmenting.

Even some of the most rabid parts of the Murdoch media have recanted, realising they have gone too far. They can see that the risk of instability and the disrespect shown to the constitution will turn off the cultural conservatives and business groups who are the bedrock of their audience.

The opinion page of The Wall Street Journal, for instance, called for Mr Trump's impeachment on Thursday, although it has still not acknowledged its role over the past two months in building the myth that the Democrats stole the election. Fox has also toned it down.

Other right-wing media outlets, however, have no such scruples and are diving ever deeper into the madness, even claiming the riot at the Capitol was not their own creation but a diabolical provocation orchestrated by "antifa" left-wing protesters. Fox must be under pressure to cook up its own conspiracy or lose audience share.

It is unlikely that the setback will be permanent. The depth of anger in the US guarantees a profitable market for conspiracy theories.

In a country with a free press and a diverse media market, it is inevitable that readers and viewers will gravitate to media that reflect their values.

But the public in the US and here in Australia should reflect on whether they want to consume media fuelled by paranoia.

The problems of bias in the media are certainly not confined to the extreme right. Some attacks on the mainstream media are justified. It can struggle to reflect points of view different to the mostly university-educated people who staff news rooms. It can be spun and misled.