Only one in five coronavirus-positive Victorians have fever

Coughs, sore throats and runny noses are the most common symptoms being detected in Victorians testing positive to coronavirus, with only one in five people presenting with a fever.

While fever is often thought to be a distinctive feature of the virus, data compiled by the state's public health team shows only about 20 per cent of people found to have coronavirus in recent weeks had a high temperature. 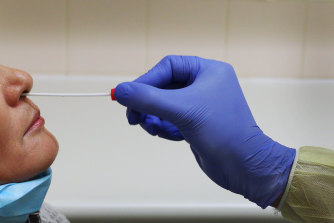 The severity of COVID-19 differs greatly between people tested in the community and patients sick enough to present to emergency departments.Credit:Getty Images

Infectious disease physicians suspect this is due to young people, who have been over-represented in the state's second surge of cases, experiencing milder bouts of COVID-19.

"What it suggests to me is that we are seeing a lot more younger people with more milder illness, so a fever may not be as prominent a symptom as it was in the first wave of cases," Australian National University infectious disease expert Professor Sanjaya Senanayake said.

"It also highlights that even if you don't have a fever but you have any kind of acute respiratory infections symptom like sore throat, cough, runny nose, then you should be getting tested."

Medical director for infection prevention and epidemiology at Monash Health, Professor Rhonda Stuart, said the severity of COVID-19 differed greatly between people tested in the community and patients sick enough to present to an emergency department.

"When we are ringing through positive results for people in the community, a lot of people only have really mild symptoms, so just a bit of a fever, a sore throat, or a bit of sniffle," she said.

Only 10 to 15 per cent of people with COVID-19 require hospitalisation – a figure that has remained largely unchanged throughout the pandemic.

"What brings people to hospital is shortness of breath, that's the main thing people get concerned about, and feeling short of breath with a cough that is getting progressively worse," Professor Stuart said. "Often they will come into hospital with a fever."

Professor Stuart has noted striking differences between age groups struck down with the virus.

While children were more likely to present with a fever and milder symptoms such as loss of appetite, elderly patients often came to hospital confused or after falling and injuring themselves.

"The elderly can present with things that are not classically coronavirus," she said. "Things like increased falls, increased confusion and delirium – they're the things we need to be careful of and watching out for in the elderly.

"It's a very tricky virus and it presents in so many different ways, so we have always got to be thinking, 'Could this be COVID?' no matter what presentations we are seeing to the hospital."

Delirium is an acute condition characterised by an abrupt change in the brain that causes confusion and reduced awareness.

"We've had so much more transmission this time around that we are seeing more cases and then … we have a whole range of people having no symptoms right through to people needing intensive care," Professor Stuart said.

She said the good news was the virus did not appear to be making people sicker.

"From what I have seen there is no worsening sort of strain from presentations – it's just the pure numbers of people being infected increasing," she said.

A breakdown of Victorians being tested, which was obtained by The Age and The Sydney Morning Herald, shows that of the more than 2.4 million people tested for the virus across the state, people aged in their 20s and 30s made up almost 40 per cent.

Victorians aged 80 to 89 made up just 4 per cent, followed by people aged over 90 at less than 2 per cent of people tested.

A health data snapshot released by NSW last week showed stark differences in virus symptoms across age groups, with young children and the elderly more likely than other cohorts to have diarrhoea, nausea and vomiting.

Emergency doctors nationwide have previously reported increasingly seeing certain types of skin rash or sore and discoloured fingers or toes that appear to be a manifestation of coronavirus. Temporary loss of taste and smell is also a common symptom.

Related posts:
Your BT broadband bill could drop, but it’s bad news for Vodafone, Three and O2 customers
Meghan Markle ‘has pitched Black Lives Matter movie to Netflix’ amid £112m deal
Popular News
Ant and Dec wanted I’m A Celeb in north of England: ‘We pitched lots of castles'
19/09/2020
Man Utd wonderkid Ramon Calliste, called ‘the next Giggs’, now owns luxury watch business and makes £5m a year – The Sun
26/03/2020
Megan Thee Stallion Addresses Criticism Over Twerking: ‘I Love to Shake My A**’
26/03/2020
Police guard shops to stop coronavirus panic-buyers and enforce social distancing – The Sun
26/03/2020
Coronavirus: Good Morning Britain’s Dr Hilary reveals ‘game-changing’ self-testing kit
26/03/2020
Recent Posts
This website uses cookies to improve your user experience and to provide you with advertisements that are relevant to your interests. By continuing to browse the site you are agreeing to our use of cookies.Ok