At least one in ten coronavirus cases in England in May were among health and care workers, according to a report published today.

And this transmission — which often happens between people with no symptoms — acts like a ‘revolving door’ with outbreaks in the community, with both feeding off each other.

The report was produced by the Royal Society and also estimated an extra one per cent of cases were among hospital patients who caught the virus in hospital.

And another six per cent were in care home residents, the researchers said.

Inadequate protective equipment, not enough testing, not separating patients well enough and staff not following social distancing may all have been behind the spread, the experts suggested. 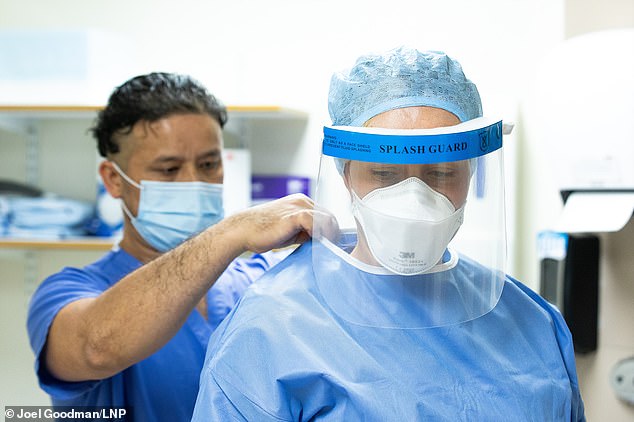 NHS staff must all now wear personal protective equipment when meeting patients in person, to avoid spreading the coronavirus (Pictured: Staff at The Christie cancer hospital in Manchester) 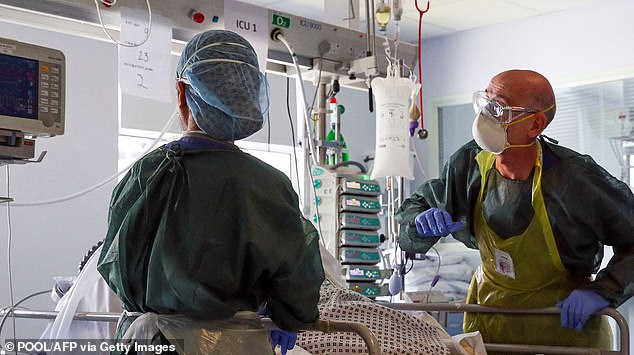 The Royal Society’s report, titled ‘Hospital and health care acquisition of COVID-19 and its control’, investigated the spread of coronavirus in hospitals and care homes in England.

It was carried out by the Data Evaluation and Learning for Viral Epidemics committee (DELVE).

It tried to work out the scale of the spread – nosocomial infection – and reasons why it had happened and how to prevent it in future.

The UK’s hospitals have been one of the main breeding grounds for spreading Covid-19, with one in five patients catching the virus while in hospital, scientists say.

Papers published in June by Sage, and prepared for the Cabinet Office, showed that at the peak of the crisis, transmission within hospitals was believed to account for up to 22 per cent of cases in hospitalised patients, and up to 11 per cent of deaths.

The figures did not include staff, or those attending outpatients appointments, so the numbers could be an underestimate.

In light of the data, a letter from NHS England Medical Director Professor Stephen Powis has been sent to hospitals instructing them to ‘minimise’ close contact between staff and urges workers to ‘avoid congregating at central work stations’ and take staggered breaks.

Reportedly it wasn’t until May 18 that Public Health England (PHE) issued guidance to hospital staff as to how they should follow distancing rules, according to an investigation by The Daily Telegraph.

This was almost two months after the UK entered lockdown on March 23.

The data has fuelled concern that NHS trusts, alongside care homes, are causing Covid-19 to ‘re-seed’ into the community, making it difficult to lift lockdown restrictions.

The researchers said it was important to understand the spread among health and care workers because it contributed to cases in the community as well, and vice versa.

The report said: ‘Infections in hospital have important implications for infection outcomes (hospitalised patients and some staff are at higher risk), workforce planning (healthcare workers being unable to work during peak pressure periods), and amplification of community transmission (through discharge of infectious patients and transmission to families and other contacts from healthcare workers and patients).’

Data from between April 26 and June 7, the report said, revealed that at least 10 per cent of all Covid-19 infections were in health and care workers.

This period did not include the peak of the crisis, which was at the end of March and the start of April.

But health workers made up a smaller proportion of all cases during that time, the report said, when the virus was more widespread among members of the public.

It estimated that the peak of all in-hospital infections was at the same time as the national peak, but hospitals made up the greatest proportion at the start of May, when it was between 10 and 20 per cent.

Professor Anne Johnson, from University College London, said: ‘Hospital-acquired infections amplify community spread…. There is a revolving door from the hospital to the community and back again,’ the Evening Standard reported.

Health and care workers were likely to catch the virus at work while caring for people with Covid-19, it said, and then to take it home and spread it to their families.

Or on the other hand, they were at risk of spreading it to more people if they caught it outside of work, because they come into contact with so many people.

The report included one case study of a hospital worker in Germany who went into work with a fever and infected 28 colleagues, 13 patients and seven visitors.

In that case the uncontrolled spread had been blamed on a lack of social distancing and protective equipment (PPE), as well as the infected worker not staying at home. 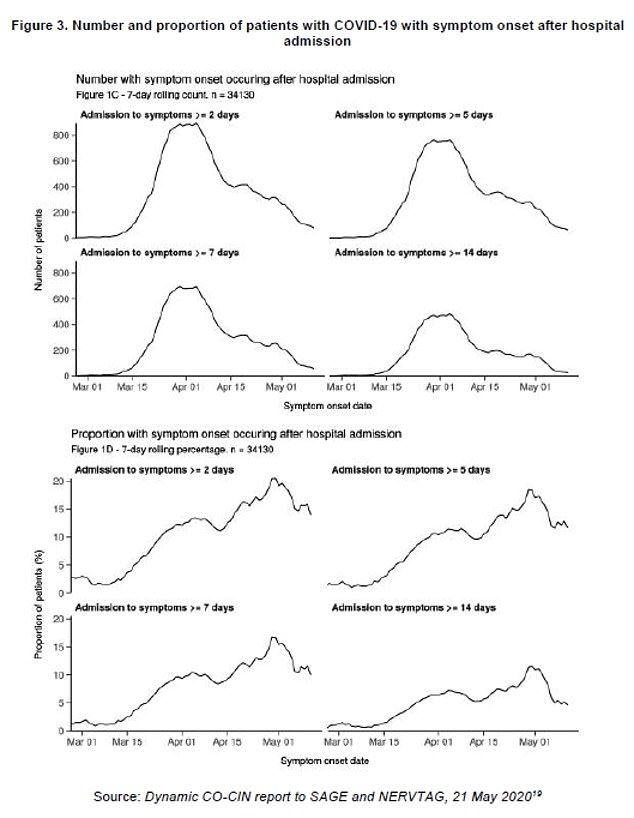 Data showed that the proportion of cases being accounted for by in-hospital infections peaked in early May, about a month after the peak of deaths in England, which came in early April

It appeared to include Britain but did not single out specific causes in NHS hospitals.

Some of the reasons the virus appeared to spread so quickly in hospitals and care facilities were, the report said, inadequate hand washing, a failure to properly disinfect surfaces, lack of appropriate physical distancing, not separating infected and non-infected patients, and rotating staff through different areas of hospitals.

They also said that more testing and tracing would be needed in future to control the spread of the virus among healthcare workers.

In recommendations for reducing infections in the future the experts recommended widespread, rapid testing for all staff in hospitals, not just doctors and nurses.

They also called for better surveillance and data for hospital-acquired infection, outbreak investigations for when cases did appear, and more research into cost-effective ways of reducing the spread of the disease.

Professor Johnson said: ‘We now better understand the risks of COVID-19 transmission within hospital and care settings although improved data are needed.

‘As in many countries, outbreaks have occurred and continue to occur, though renewed prevention efforts are now in place.

‘Now we need to learn from our experience and use our greater understanding of how the pandemic has played out, to ensure we are better prepared to prevent and manage new outbreaks and a potential second wave, protecting everyone.’