Louisville: A grand jury has indicted a former Louisville police officer for wanton endangerment during a botched drug raid that led to the death of Breonna Taylor in March. No charges were announced against the other two officers who fired shots.

The three-count indictment concerns Brett Hankison, a detective at the time, who fired into the sliding glass patio door and window of Taylor's apartment building, both of which were covered with blinds, in violation of a department policy that requires officers to have a line of sight. 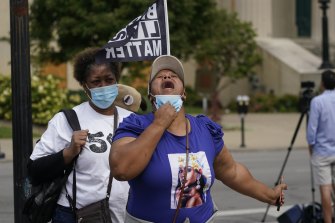 A woman reacts to the grand jury indictment in Louisville, Kentucky, where a crowd gathered to hear the news.Credit:AP

He is the only one of the three officers who was dismissed from the force, with a termination letter stating that he showed "an extreme indifference to the value of human life".

The decision on Wednesday US time (Thursday AEST) came after more than 100 days of protests and a months-long investigation into the death of Taylor, a 26-year-old emergency room technician who was shot five times in the hallway of her apartment by officers executing a search warrant. 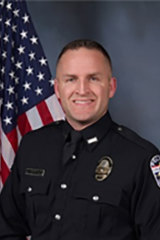 Because the officers did not shoot first – it was the young woman's boyfriend who opened fire; he has said he mistook the police for intruders – many legal experts had thought it unlikely the officers would be indicted.

Taylor's name and image have become part of a national movement over racial injustice, with celebrities writing open letters and erecting billboards demanding that the white officers be criminally charged for the death of a young black woman.

City and state officials feared a grand jury decision not to prosecute the officers would inflame a city that has been roiled by demonstrations that have sometimes turned violent.

Taylor's mother sued the city of Louisville for wrongful death and received a $US12 million ($17 million) settlement last week. But she and her lawyers have insisted that nothing short of murder charges for all three officers would be enough.

In anticipation of the grand jury's decision, the Louisville Police Department cancelled holidays, and Chief Robert Schroeder ordered a 10-day "state of emergency".

Frustration has mounted in Louisville at the pace of the investigation into the fatal shooting. That frustration has been compounded by a city administration that refused to release basic records and that made inexplicable errors in some of the documents it did release, including a report incorrectly claiming that she had not been injured and that the door to her apartment was never breached.