Officer reinstated after being taken off duty due to false claims

Police officer is reinstated after being taken off duty for TWO YEARS because boy, 14, with a history of lying falsely claimed he had punched him in the face

A police officer who was falsely accused of assault by a 14-year-old boy two years ago will finally be able to return to his frontline duties.

PC Paul Evans, 52, from Bridgend, South Wales, a hate crime officer in the community engagement team for South Wales Police, was left having to prove the schoolboy had lied about the bogus attack in court and at a disciplinary hearing.

Today Police Federation chiefs hit out at the ‘unacceptable’ two-year delay for highly-commended officer PC Evans to return to work.

The police officer, who was acquitted of using unnecessary force on the boy on May 22, was called to the domestic incident at the family’s home in January 2018 because the boy was ‘smashing the place up’ in an argument with his mother. 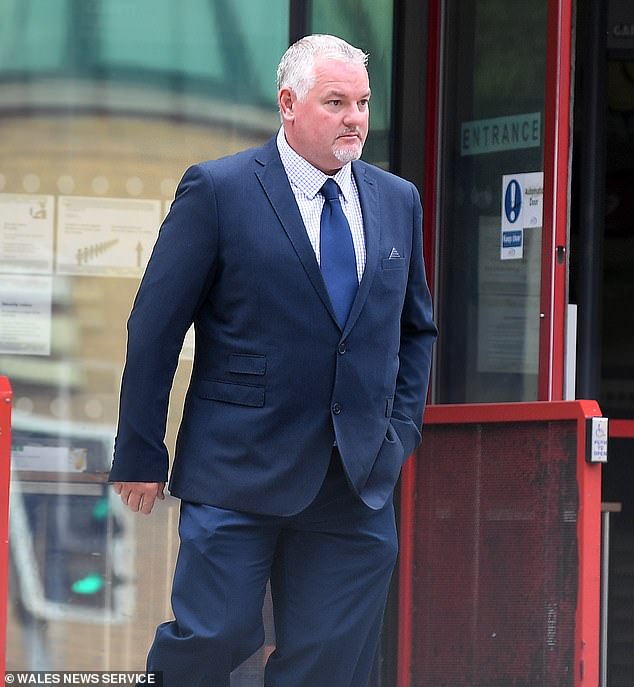 PC Paul Evans (pictured outside Cardiff Magistrates’ Court), 52, from Bridgend, South Wales, was taken off duty for two years after a 14-year-old boy falsely accused the officer of assault

The boy – who has the Attention Deficit and Hyperactivity Disorder (ADHD) – later accused PC Evans of grabbing his throat and punching him three times in the face.

The schoolboy claimed he suffered a bleeding nose, chipped tooth and bruising on his face when the PC lashed out at being called a ‘pig’ and ‘p***y’.

However PC Evans always insisted the teenager had falsified the assault while being arrested for affray – and instead ‘face-planted’ the floor in a struggle after he locked himself in the bathroom.

The officer, who trained to deal with hate crime confrontations in the force’s community engagement team, told the court: ‘It was a lie. It was all fabricated.’

The court heard how the boy had a history of false allegations including making a hoax call to police claiming to have found ‘nail bombs’ at his school.

But it has taken PC Evans since January 2018 to clear his name of misconduct in order to return to frontline work in South Wales. 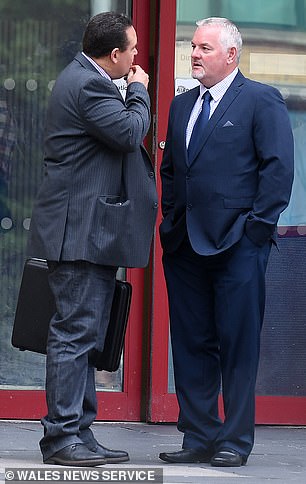 PC Evans, who always insisted the teenager had falsified the assault, was acquitted of using unnecessary force on the boy on May 22

South Wales Police Federation Chair Steve Treharne said: ‘The length of time in bringing this misconduct case, like so many others we see, is not acceptable.

‘The time delay alone causes anxiety and stress to our colleagues, who are human beings like everybody else.

‘There is also a cost to the people of South Wales Police – who were denied the frontline service of this highly commended and capable officer for over two years.

‘It is absolutely right that police officers are accountable for their actions and decisions. PC Evans was cleared by a court and by a misconduct panel after careful consideration of all the evidence.

‘He is greatly relieved that nearly two and a half years of worry uncertainty are at an end – but it has been a hugely stressful ordeal for PC Evans and his family.’

The force said the constable had been under ‘intense scrutiny’ and its focus was now on getting him back to work on frontline duty. 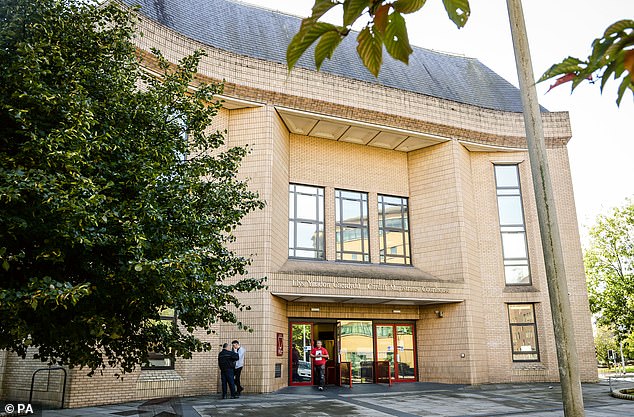 He said: ‘The allegation made against PC Evans was subject to an independent investigation by the Independent Office for Police Conduct which found the officer had a case to answer for gross misconduct.

‘However, a misconduct panel, comprising of a legally qualified chair, a police superintendent and an independent member, has concluded that the officer has no case to answer.

‘The officer has been subject to intense scrutiny over the two years since this allegation was made and our focus now will be to offer him the support he needs to return to serving the communities of South Wales.’

PC Evans faced both criminal and misconduct hearings after the house call in January 2018.

He was found not guilty of common assault by beating at a three-day trial at Cardiff Magistrates Court in October 2018 – and on Friday cleared of misconduct in a four-day hearing by a disciplinary panel.

A spokesman the Police Federation said: ‘Police Officers must make split second decisions. They do not have the luxury to digest and scrutinise all the evidence and then decide after many days, weeks or months.’

PC Evans’ Federation representative PC Darran Fenton added: ‘PC Evans is relieved that the panel found he had not breached any misconduct matters in this case. Over the past two years this investigation has put an immense strain on him and those close to him.’

Catrin Evans, Independent Office for Police Conduct director for Wales, said it was ‘appropriate’ to carry out a thorough investigation.

She said: ‘While we found a case to answer following our investigation, it is not for us to determine the outcome and this has been decided by a panel.’

Related posts:
Is there a better holiday on the sports calendar than Memorial Day?
Paedophile, 21, avoids jail after driving 200 miles to abduct girl, 15
Popular News
Toddler is caught sneaking out of bed to cuddle up with his dog
13/07/2020
Man Utd wonderkid Ramon Calliste, called ‘the next Giggs’, now owns luxury watch business and makes £5m a year – The Sun
26/03/2020
Megan Thee Stallion Addresses Criticism Over Twerking: ‘I Love to Shake My A**’
26/03/2020
Police guard shops to stop coronavirus panic-buyers and enforce social distancing – The Sun
26/03/2020
Coronavirus: Good Morning Britain’s Dr Hilary reveals ‘game-changing’ self-testing kit
26/03/2020
Recent Posts
This website uses cookies to improve your user experience and to provide you with advertisements that are relevant to your interests. By continuing to browse the site you are agreeing to our use of cookies.Ok