Police were originally called to the scene on the east side of the city around 3:45 p.m. on a report of an attempted stabbing.

The victim, who Columbus Mayor Andrew Ginther described as a “young woman,” was pronounced deceased at a local hospital shortly before 5:30 p.m.

Hazel Bryant, who identified herself as the victim’s aunt, said that her teenage niece picked up a knife to defend herself during a fight with other people in the neighborhood.

The Ohio Bureau of Criminal Investigation, which is investigating the shooting, has not identified the victim.

Videos posted by local news reporters and bystanders showed a chaotic scene. The shooting occurred just before a verdict was announced in the shooting death of George Floyd, for which former Minneapolis police officer Derek Chauvin was found guilty of murder.

Mayor Ginther said that there is body-worn camera footage of the invident that authorities are working to review.

“We will share information that we can as soon as it becomes available,” Ginther wrote on Twitter. “I’m asking for residents to remain calm and allow BCI to gather the facts.” 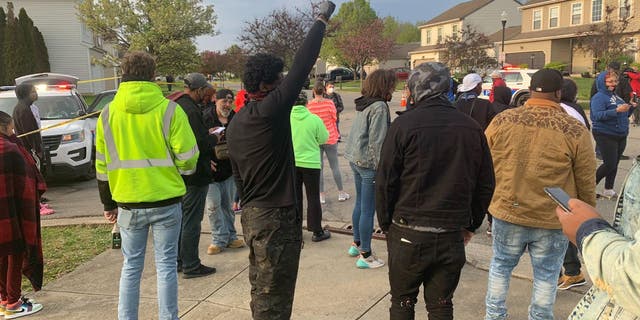 A crowd gathers at the scene of a fatal officer-involved shooting in Columbus, Ohio.
(@LaceyCrisp / WBNS)

Protesters were gathering near the location of the shooting and shouting at police as investigators worked the scene.

Another Columbus police officer is facing a murder charge for a fatal shooting. Officer Adam Coy shot Andre Hill on Dec. 22 as Hill was emerging from a garage holding up a cell phone, officials previously said.

This is a developing story. Check back for updates.