This remark by John Denton, the Australian secretary-general of the International Chamber of Commerce, to our Europe correspondent, Bevan Shields, was meant as a verdict on the Group of Seven nations’ summit pledge to donate 1 billion doses of COVID-19 vaccines. But it could easily have applied to a series of other challenges faced by the world’s leading industrialised democracies.

As they stood for a photo opportunity on the sands of Carbis Bay in Cornwall, the distance between the leaders was more than just social. German Chancellor Angela Merkel, who once told a Europe confronted by a wave of refugees that “Wir schaffen das” (we can do this), is about to depart the political stage. French President Emmanuel Macron is struggling for survival in a country increasingly drawn to the far right. Canadian Prime Minister Justin Trudeau is still smarting from US President Joe Biden’s decision to revoke the permit for the Keystone XL oil pipeline between the two nations. 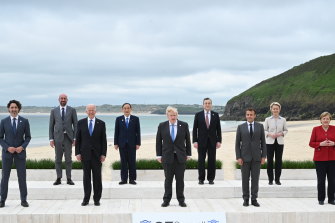 It is more than 20 years since the G7 became the G8, reaching out to Russia in a confident gesture of inclusion as it emerged from communism, only to find hopes confounded by the rise of Vladimir Putin and his 2014 annexation of Crimea. In the years since, division has reigned. Britain tore itself out of the European Union, and the weekend’s summit in Cornwall served up continued bickering over the terms of that divorce; the United States soured on free trade and elected Donald Trump, who withdrew Washington from the Trans-Pacific Partnership and slapped tariffs on his allies; and Xi Jinping’s regime in China has left G7 nations struggling for a unified response in much the same way Mr Putin did.

None of the G7 leaders is on solid enough ground to push for daring and major changes in the global order, though much has been made of their commitment to end state investment in coal power generation by year’s end. Japan, with one eye on Chinese expansion in the sector, resisted this move and the Morrison government immediately appeared to undercut it, saying Australia had not signed the agreement.

The new formula is that instead of seeking to combat China the G7 nations will team up to compete with it, with the White House announcing a Build Back Better World (B3W) Partnership aimed at providing a greener alternative to Beijing’s Belt and Road Initiative. But here again the detail and the financial commitment were lacking. Despite British Prime Minister Boris Johnson’s talk of a new Marshall Plan on climate, the Green Climate Fund to help poorer nations decarbonise – a pledge first made in 2009 – still does not have the $US100 billion a year in funding that was envisioned. Instead, Mr Johnson finds himself locked in a dispute with members of his own Conservative Party over Britain’s declining foreign aid budget, an area where Canberra has also come in for criticism. The limp commitment on vaccines is another example.

This lack of resolve allowed China’s embassy in London to declare that “the days when global decisions were dictated by a small group of countries are long gone”. The next meeting, NATO, talked tougher. Its joint communique hit out at Beijing’s “coercive policies” and complained about its “rapidly expanding” nuclear arsenal and its opacity and use of disinformation.

But the more the G7 nations can adopt a truly international stance, in which smaller and poorer nations are confident of their commitment to fighting the pandemic, climate change and poverty, the harder it becomes for Beijing to take up the slack.

In its press release announcing the B3W initiative, the White House said it would be “global in scope … Different G7 partners will have different geographic orientations, but the sum of the initiative will cover low and middle-income countries across the world.”

The inclusion in the summit of four “extension partners” – India, Australia, South Africa and South Korea – was an acknowledgement of the G7’s limits in this regard. But as Prime Minister Scott Morrison has discovered at recent Pacific Islands forums, extending these partnerships to truly cover our region and the globe when it comes to vaccination and decarbonisation will require a paradigm shift in how Australians and others conceive their national interests. So far such a re-orientation seems a distant dream.