Jones, who later died, burst into flames when he was tasered after spraying himself with alcohol-based hand sanitizer.

A 29-year-old New York man allegedly stormed into the local police station, drunk and angry, and got into an argument with officers in the lobby. By the time officers went to subdue him with a Taser, he had drenched himself with alcohol-based hand sanitizer and went up in flames after the jolt.

It happened in Catskill, New York, a small village of about 4,000 people, 33 miles south of Albany, the state capital. 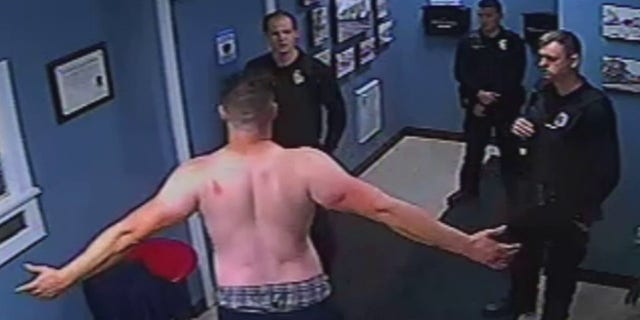 Jason Jones died weeks after being accidentally set on fire in a harrowing incident involving hand sanitizer and a Taser.
(Catskill Police)

Jones was a star athlete in high school, according to local reports, and Police Chief Dave Darling said that the officers knew him and may have been worried he would hurt himself.

But that context is absent from the two surveillance videos released Friday, neither of which have sound.

“Was the use of force reasonable for the crime at issue? The video doesn’t show what the underlying crime was, other than he was apparently intoxicated and possibly combative,” said Betsy Brantner Smith, a spokesperson for the National Police Association, who spent 29 years on the job. 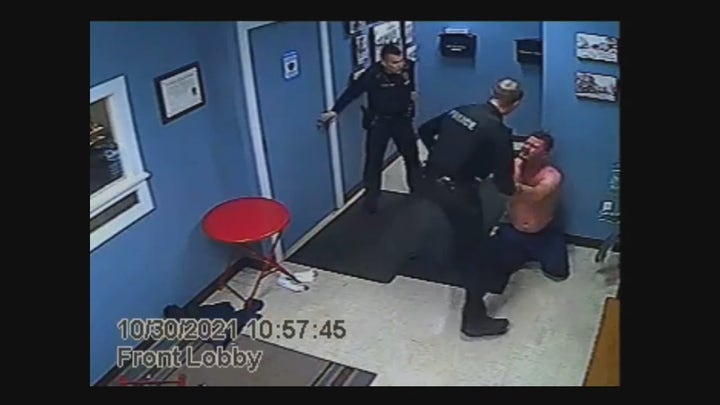 Jones is seen pacing around the police station lobby, shouting, attempting to force open a locked door and tearing his shirt and shoes off. There’s no audio, but a trio of officers appear to be talking to him for most of the encounter. There are times when he looks like he’s shouting.

Eventually, he picks up a gallon jug of hand sanitizer and douses his head and shoulders. A few seconds later, one of the officers draws a Taser and aims it at Jones, who at that point has walked out of the camera’s view.

The officer discharges the stun gun and begins to approach Jones, who is still off camera. But then a bright flash sparks up from his direction, and the officers stumble back. He rolls back into view, his head and upper body ablaze, stumbling to his knees and writhing in pain as the officers scramble in shock.

When the flames flicker out about 23 seconds later, Jones has visible burns to his upper back and face. He spent more than six weeks in the hospital and died there Dec. 15. 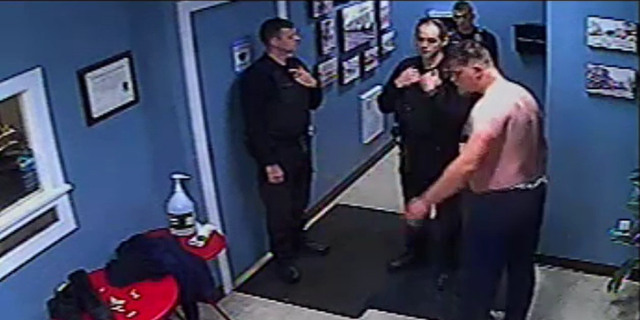 Jason Jones, 29, allegedly stormed into the police station Oct. 30 and kicked off an argument with officers in the lobby, according to Catskill police.
(New York Attorney General’s Office)

“There are guidelines for police use of force, which could be applied in this circumstance. However, none of the answers as to whether the officers used appropriate force are provided in the video,” Brantner Smith told Fox News Digital Friday.

The village police use-of-force policy requires officers to factor in “environmental conditions or exigent circumstances” before using anything “more than a firm grip.” And officers are trained not to use Tasers in certain situations, such as when a suspect is standing near a gas pump or in water, safety experts say.

“Once the alcohol is on him, you can’t use the Taser,” said David Katz, the CEO of Global Security Group and a longtime Drug Enforcement Administration agent.

Jones’ family said they were “sickened” by the video. Their attorney, Kevin Luibrand, said James’ office shared video with them before releasing it publicly, according to Hudson Valley 360, a regional media site.

Luibrand could not immediately be reached for comment Friday evening.

And in the wake of former Brooklyn Center police officer Kim Potter’s conviction on manslaughter charges for accidentally shooting and killing a fleeing felon after mistaking her handgun for her Taser, some experts are looking at ways to reevaluate how police deploy nonlethal force.

“I’m becoming less and less enamored with Taser technology,” Katz told Fox News Digital. “There are many failures, but increasingly, officers are so afraid to use their firearm that they are using Tasers and other less-than-lethal means when they should be shooting.”

One example he gave involved an Oklahoma City police officer confronting an armed suspect. Body camera video shows the officer, Andrew Ash, asking an armed felon not to shoot him and attempting to de-escalate the situation with a gun pointed in his face.

Ash eventually fired a shot, but no one was injured. Police arrested Antwon Hill later after he barricaded himself in a nearby apartment.

“The better way to use less-than-lethal would be to have one person responsible for those technologies during the arrest, and at the same time, have other officers prepared to use deadly force if it becomes necessary,” he said.

County authorities did not immediately respond to messages seeking comment.