Lost in thought with his arms on his hips, this is the husband of murdered British mother Caroline Crouch, seen for the first time inside the prison where he is being held for her brutal killing.

Babis Anagnostopoulos, 33, was pictured from behind barbed wire as he stretched his legs in the exercise yard of the notorious Korydallos prison which is located on the outskirts of Athens and is Greece’s main maximum-security facility.

Conditions inside the prison are so bad that the Greek government has vowed to shut it down but Anagnostopoulos is being housed in its ‘VIP’ wing, enjoying a host of luxuries that have left other inmates and prison wardens fuming at the ‘five-star’ treatment he is receiving.

Photographs were also published in the Greek media on Saturday showing the inside of Anagnostopoulos’s cell, which comes with its own shower, toilet, set of furniture, large window which allows in plenty of light and a television. 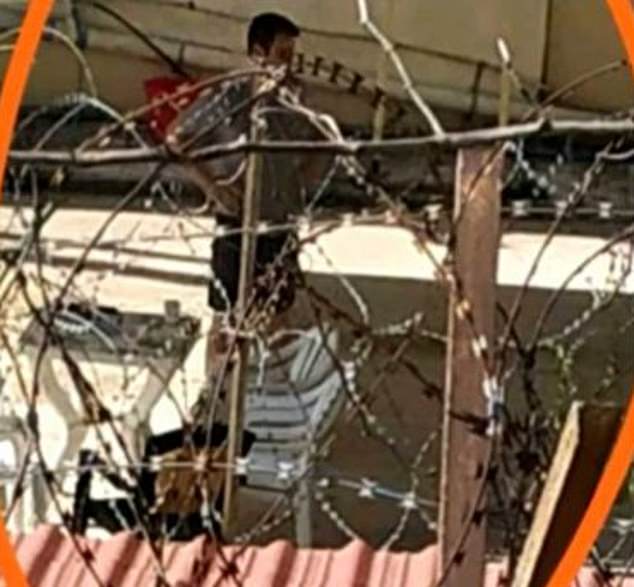 Babis Anagnostopoulos, 33, was pictured from behind barbed wire in the exercise yard of the notorious Korydallos prison, which is Greece’s main maximum-security facility

Anagnostopoulos also has a fan to help cope with searing heat inside his cell caused by outside temperatures hitting 36C as Greece is gripped by a heat wave.

He has been given the top bunk and is sharing the spacious cell with three other prisoners: one a former prison warden, facing charges of drug dealing and two drug dealers.

Inmates are reported to be so incensed at the soft treatment meted out to Anagnostopoulos that on Friday his lawyer was unable to visit him because of fears that it might lead to violence.

One prison warden was quoted telling Greek TV: ‘It’s as if he’s at home and enjoying his life. There is a lot of anger at the luxury he is getting.’

Anagnostopoulos has become Greece’s most notorious prisoner after confessing to murdering Caroline, 20 and then staging an elaborate hoax to make it appear that she had died in a botched burglary.

Prison sources also revealed that after initially being remanded in custody following a court hearing on Tuesday, Anagnostopoulos did not speak at all but since then he has become more sociable with his cell mates. 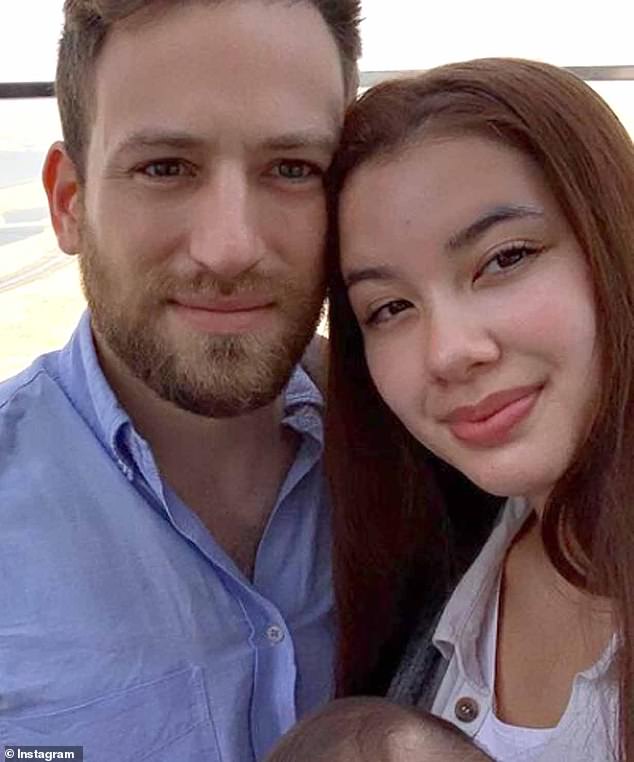 Anagnostopoulos confessed to murdering Caroline, 20, (both pictured) and then staging an elaborate hoax to make it appear that she had died in a botched burglary

Anagnostopoulos has asked to be given work at the prison and requested a number of books to help him while away the time as his trial is not expected to take place for another 18 months.

His trial is not expected to take place for another 18 months.

While Anagnostopoulos remains in an ‘exclusive’ part of Korydallos, prisoners on other wings face conditions that have been described as ‘degrading’ and ‘inhuman’.

A number of reports have found that it is controlled by violent gangs with prison wardens too afraid to patrol inside. Drugs are freely available with shipments organised by prisoners openly using mobile phones.

A delegation from the Council of Europe that visited the prison last year found that up to seven people were crammed into mould-infested cells measuring just 9.5 square metres and that many slept on mattresses on the floor.

The delegation also said buildings at Korydallos holding between 230 to 430 people each were often overseen by just one prison officer ‘who clearly was not in a position to exert any authority or control.’

The prison was opened in 1967 with a capacity for around 8,000 inmates but it is now estimated that it houses almost 13,000 prisoners.

Caroline, a the mother-of-one, was smothered by her husband Anagnostopoulos over the course of six minutes as their baby daughter Lydia lay nearby. 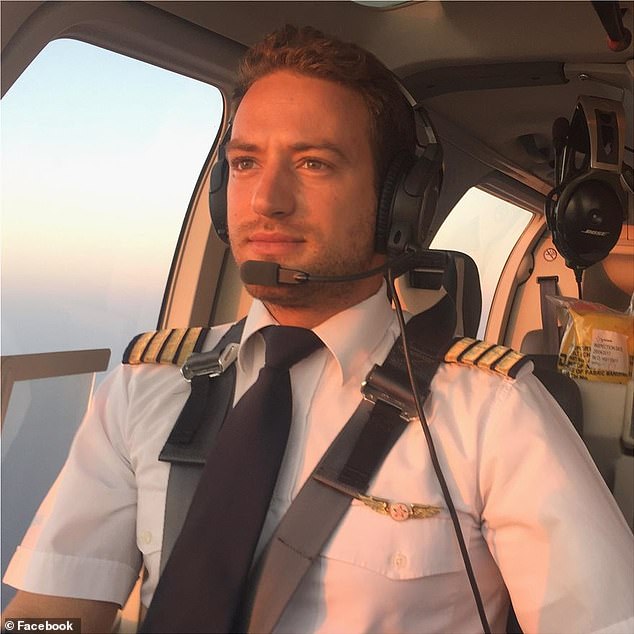 Prison sources revealed that after initially being remanded in custody, pilot Anagnostopoulos (pictured) did not speak at all but since then he has become more sociable with his cell mates 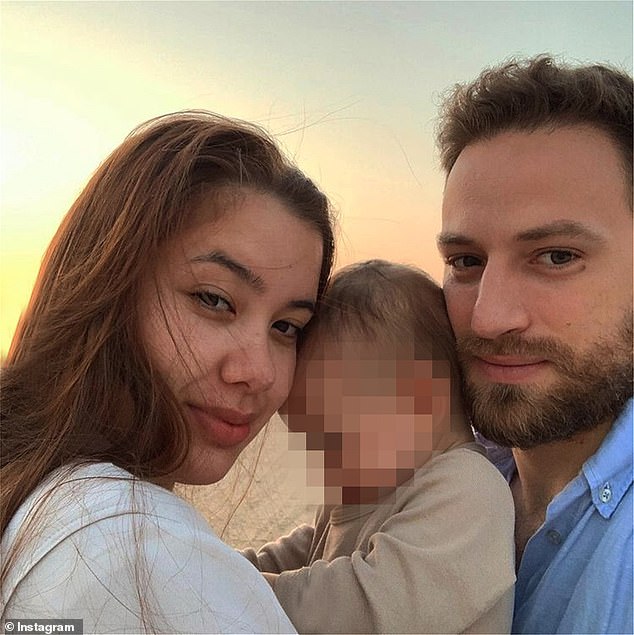 Anagnostopoulos (pictured with Caroline and daughter Lydia) is in the prison’s ‘VIP’ wing, enjoying a host of luxuries that have left other inmates fuming at his ‘five-star’ treatment

For weeks, Anagnostopoulos played the grieving widower as police searched for the ‘robbers’ he claimed had tied him up and killed his wife, plus the family’s pet dog, Roxy.

Then last Wednesday, hours after hugging Caroline’s mother Susan at a memorial service, the 33-year-old finally brought the cruel charade to an end with a police confession.

Police claimed on June 17 that Anagnostopoulos had confessed to killing Caroline in a fit of rage after she threatened to divorce him and take their baby daughter.

Not long before Anagnostopoulos’ confession, detectives extracted biometric data from Caroline’s watch which they believed pinpointed the exact moment her heart stopped beating – hours before the alleged burglary took place.

‘I really regret this act, I ruined my life and my family,’ he told a judge when he appeared in court in Athens this week, the transcript of which was recently released.

While confessing to his crime, Anagnostopoulos claimed that he staged an elaborate hoax to make it appear that Caroline had been killed in a botched burglary because he did not want Lydia to be brought up without any parent.

Caroline’s parents are seeking full custody of Lydia, and earlier this week applied to a court in Athens to be granted care of her. The court will decide next week.

Susan is demanding that she and her husband David – Caroline’s father – be given full custody and that Lydia stay with them on Alonnisos until a final decision is made.

Lydia is currently being looked after by Anagnostopoulos’s parents at their Athens home and they are demanding that custody of her be shared.

His lawyer, Alexandros Papaioannidis told MailOnline that Lydia’s two grandmothers, Susan and Georgia, had spoken on the phone and that both wanted what was best for the child. 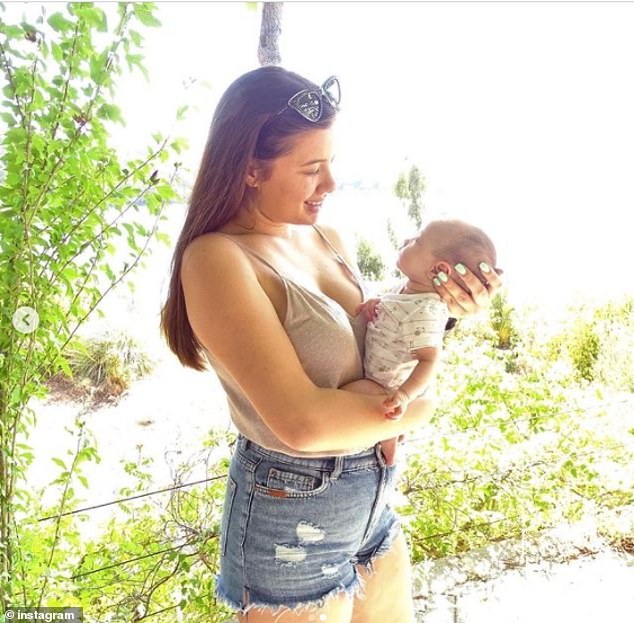 Caroline (pictured), a the mother-of-one, was smothered by her husband Anagnostopoulos over the course of six minutes as their baby daughter Lydia lay nearby 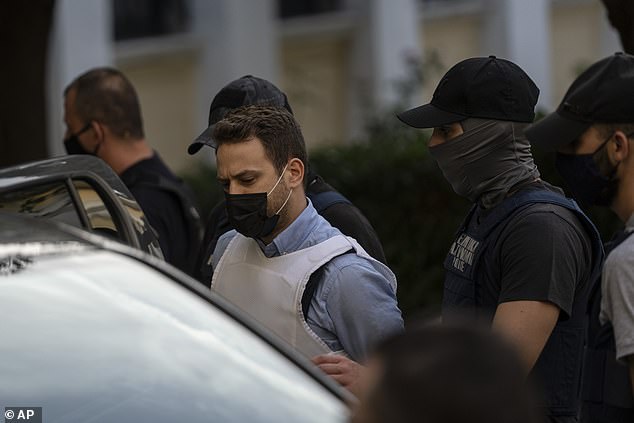 For weeks, Anagnostopoulos (pictured outside court on June 22) played the grieving widower as police searched for the ‘robbers’ he claimed had tied him up and killed his wife

He said: ‘Both families want different things, but they are on good terms and are communicating. It is the court that will have to find a solution about this.

‘My client is in prison and the only thing that he can do is care for his child as best he can. He wants custody to be shared.’

While on the face of it the couple appeared to have a seemingly perfect life in their Athens villa with their one-year-old child and a number of pets, Anagnostopoulos has claimed that in truth, Caroline was physically and verbally abusive towards him.

He told a court earlier this week that his judgement became ‘blurred’ prompting him to kill her after she attacked him.

His lawyers have summoned the parents as part of their case that the couple rowed regularly and that on the night of the murder, Anagnostopoulos acted on impulse and did not plan it.

Anagnostopoulos’s parents are expected to testify that it was Caroline who was verbally and physically abusive towards their son.

Meanwhile, Susan is to travel from her home on the island of Alonnisos to give evidence, and is expected to describe Anagnostopoulos as ‘controlling,’ who prevented her from maintaining a healthy relationship with her family. 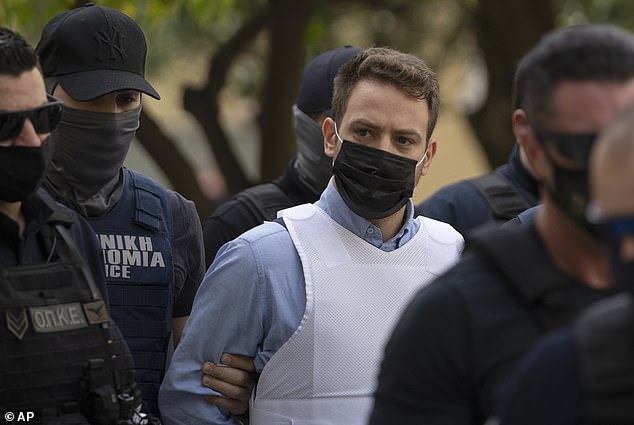 Anagnostopoulos claimed the couple had ‘argued’ again on the night of May 11 but denied he planned to kill her.

In chilling detail, the helicopter pilot spelt out the awful final moments of his wife’s life.

He said: ‘Caroline started shaking her body, to get out of my arms, and I kept holding her tight.

‘At one point, her face was wincing on the pillow. I kept holding her in my arms until she stopped rocking.

‘All this lasted for about five minutes, from the time I hugged her until the time she stopped rocking.’

Anagnostopoulos claimed he had mounted the cover-up because he could not bear Lydia growing up without either parent.

Anagnostopoulos is expected to enter a plea to a murder charge when he next appears in court.