Mother of boy, 8, who was HANDCUFFED at his elementary school while officers threatened him with jail files civil rights lawsuit against the school district, police and his teacher

The mother of an eight-year-old boy with special needs whose arrest at a Key West school sparked outrage announced on Tuesday that she was planning to sue.

Bianca Digennaro, 48, has initiated legal action after her son was detained in December 2018 while at school.

Harrowing footage of the arrest went viral on Monday after it was published online by Benjamin Crump, the Tallahassee-based civil rights lawyer representing the families of George Floyd, Breonna Taylor and Ahmaud Arbery.

Bianca Digennaro, 48, announced during a Zoom press conference she was filing a civil suit 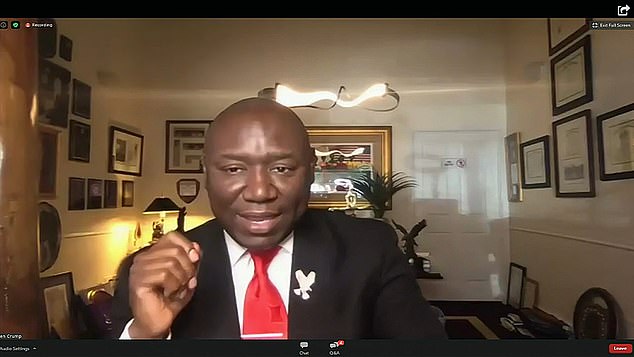 Her attorney, Benjamin Crump, said the case was against officers, school, city and teachers

The lawsuit’s allegations include that the named parties violated the boy’s civil rights by using excessive force, not intervening in his arrest and not considering his disabilities during the incident.

Digennaro said her son also has anxiety and depression, for which he takes two types of medications.

‘My son has a disability and the authorities tried to make him a criminal,’ she said.

‘I’m here for my son, because I refuse to let them make him a convicted felon at the age of 8, just because he was having a mental breakdown.’

She said her son’s teachers and the rest of the school staff were aware of his special needs.

‘Everybody knew this,’ Digennaro said, at the press conference on Tuesday.

The boy had punched a teacher in the chest and was arrested on a felony battery charge, according to the arrest report.

The document says that the boy’s teacher said the child was not sitting properly in his cafeteria bench seat.

The teacher asked him several times to sit down but he didn’t comply and she asked him to sit next to her.

He refused and told her: ‘Don’t put your hands on me.’

She then told the boy to walk with her and he told her: ‘My mom is going to beat your a**.’

He then punched her with his right hand. 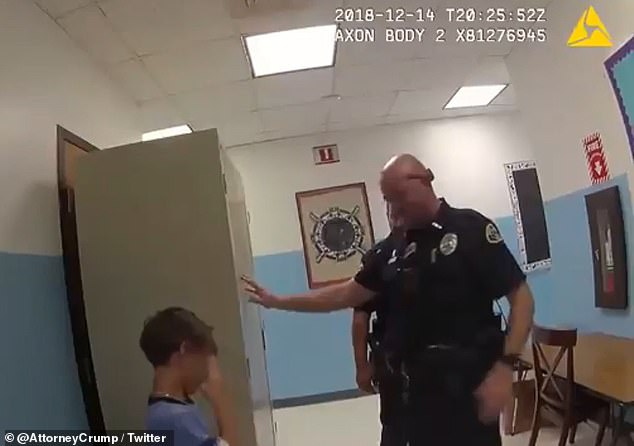 Harrowing video surfaced Monday from the 2018 incident at a school in Key West, Florida 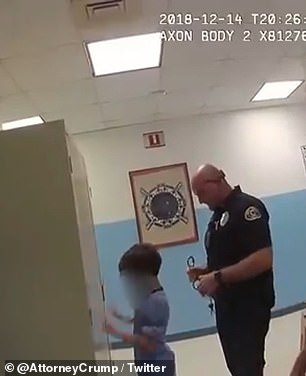 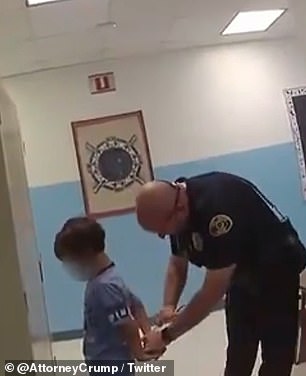 Sources close to the investigation told The Miami Herald that the boy’s father, who is not married to Digennaro, went to the school that day and asked the officers to scare his son as a way to improve his behavior.

Asked by two reporters about this Tuesday, Crump said he did not know, and that it was irrelevant either way.

‘Police officers have no authority to arrest based on the instructions of lay persons,’ he said.

Crump said the footage was deeply disturbing, and that the child was left traumatized.

One officer behind the camera says, ‘You’re going to jail. So you need to stand up and put your hands behind your back.’

An officer then frisks the child as he puts his hands on a cabinet and is then placed in handcuffs, but they’re too large and don’t fit.

The little boy looks down and complies with the officers and whimpers and cries as he’s asked to walk out of the school. 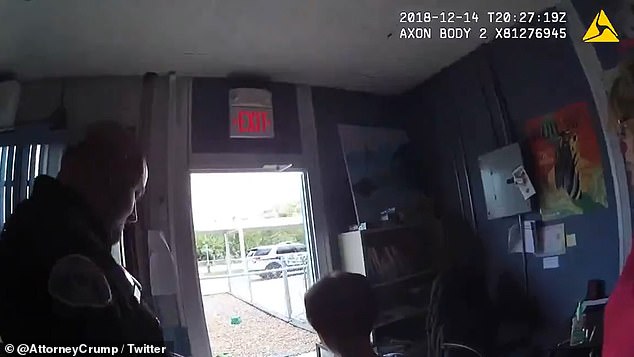 The officer told the crying child: ‘You understand this is very serious, okay?’ 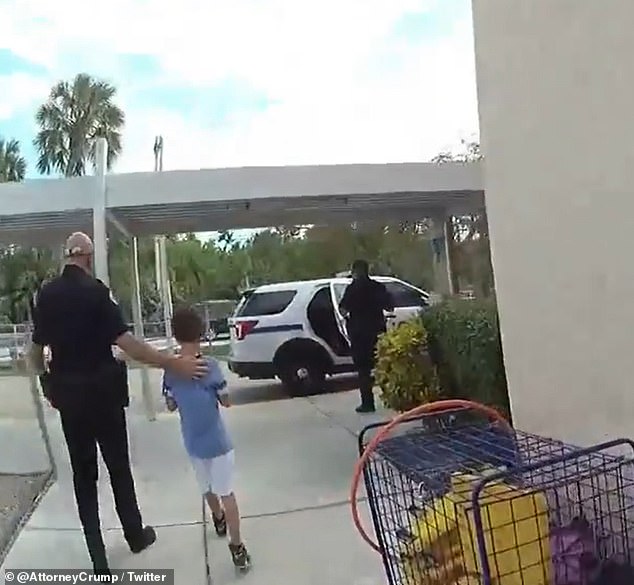 A teacher is seen coming to the boy and comforting him before he’s escorted out of the school.

‘You understand this is very serious okay and I hate that you put me in this position and I have to do this. The thing about it is that you made a mistake and you have to learn from it and grow from it and not repeat the same mistake again,’ an officer sternly tells the boy as he nods.

The clip ends with officers escorting the child towards a squad car.

The boy was then booked into a juvenile justice facility in Key West.

Digennaro said her son’s mouth was swabbed, his DNA and mugshot were taken, he was fingerprinted and then locked in a cell for several minutes.

She said on Tuesday that she finds it difficult to watch the video.

‘I can tell and I can feel how scared my son was,’ she said.

Crump said the boy was mentally scarred by the incident.

‘He vividly remembers them slamming the big doors with the bars on them,’ he said.

‘That’s the perspective of an eight-year-old child.

‘A mental health crisis at a school, and they feel it is appropriate to arrest, charge and have him become a convicted felon at eight years old.’ 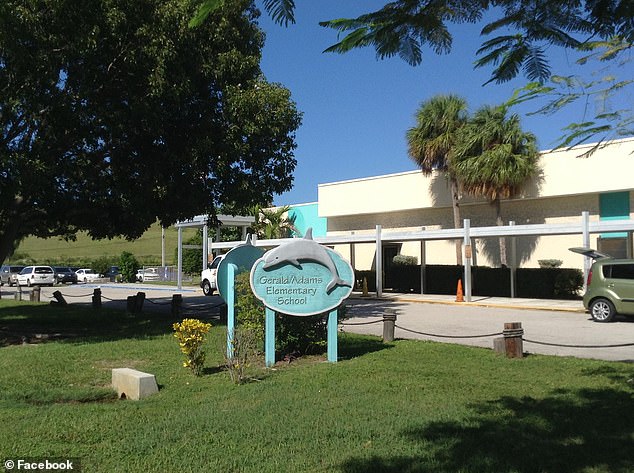 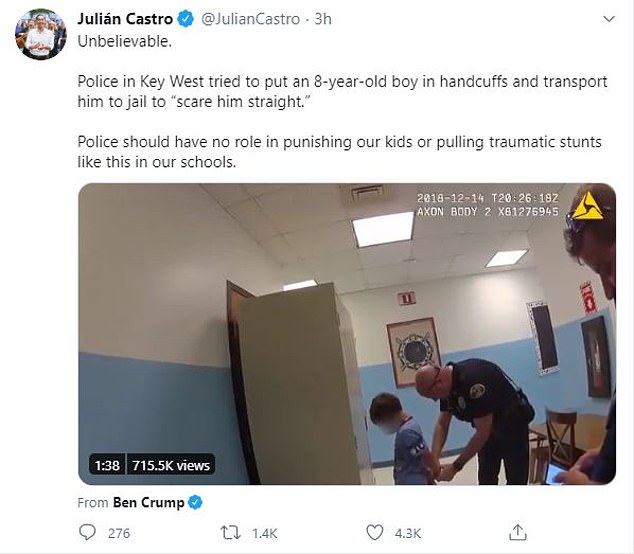 Officer Michael Malgrat wrote in the report that he was in the school’s administrative office when the teacher and the boy arrived.

He said the boy ‘had his hands clenched in fists and he was postured as if he was ready to fight.’

‘Based on the report, standard operating procedures were followed,’ he said.

The charge was dismissed almost a year later, in October 2019.

The video has been seized on as yet another example of police brutality.

Julian Castro, ex-contender for the Democrat presidential nomination and former San Antonio mayor, shared the video on Monday, describing the incident as ‘unbelievable’.

‘Police in Key West tried to put an 8-year-old boy in handcuffs and transport him to jail to ‘scare him straight,’ Castro tweeted.

‘Police should have no role in punishing our kids or pulling traumatic stunts like this in our schools.’