Airport train services will run every 10 minutes through the new Metro Tunnel, taking tens of millions of travellers annually less than 30 minutes to-and-from Melbourne's city centre under the long-awaited route for the rail project to be unveiled on Saturday.

Melbourne's $8-$13 billion airport rail link will be finally revealed by Premier Daniel Andrews and Prime Minister Scott Morrison after more than 50 years of debate. It will include plans for 12 kilometres of new track on the Geelong line, between Werribee and Laverton, to enable more frequent and faster services from the city's booming outer western suburbs. Both governments have pledged $5 billion each for the project. 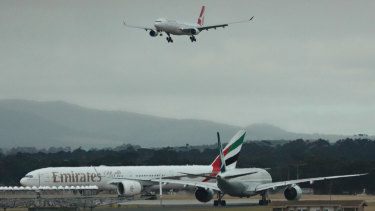 Trains will run to Melbourne airport via the new Melbourne Metro tunnel.Credit:Paul Rovere

The route was chosen ahead of a $7 billion private sector proposal, which included a dedicated airport rail tunnel between the city and Sunshine that proponents argued would have enabled fast services to the airport and the regions.

Under the final route, airport trains would run along fresh tracks from the airport to Sunshine and continue beneath the city via the new Metro Tunnel and onto the south-eastern suburbs via the Cranbourne and Pakenham lines.

More than 30 stations through the network will allow commuters a direct trip to the airport without changing services, while the overwhelming majority of travellers will have one interchange from their closest station.

Airport tickets will be incorporated into the existing system, with state government estimates that it will cost about the same as a $19.50 SkyBus ticket and will be paid for on the Myki card.

In a bid to boost the Victorian economy following the COVID-19 induced recession, planned construction will start as soon as 14 months away, creating an estimated 8000 jobs and aiming to be fully operational by 2029, pending a business case and planning requirements.

Travellers on all city loop trains will be able to connect to airport trains at Flinders Street and Melbourne Central. The services will run the new high capacity metro trains to the airport, instead of a dedicated airport fleet.

Mr Morrison, who is quarantining in Sydney's Kirribilli House following a two-day trip to Japan, said when completed the link would slash travel times, bust congestion and be a major boost to the economy.

"The airport link is a nationally significant project and Victorians have been waiting a long time for it to become a reality," he said.

Mr Andrews said the announcement was a historic day for all of Victoria.

"This project has been talked about for a long time, it's key to our recovery and this design means it will benefit all Victorians," Mr Andrews said.

"As we continue our recovery, we need a long-term plan. We need a pipeline of jobs for Victorians looking for work now, and for those who will need jobs in the future. We said we’d deliver this project, and we’re keeping our promise."

He said the 10-minute "turn-up-and-go services" from the airport would run through the heart of the city, providing direct connections to key sites including Melbourne University, the Parkville medical precinct, Melbourne Central and Flinders Street stations and the St Kilda Road business precinct.

In August last year, The Age revealed the government planned to ditch an expensive airport rail tunnel and run airport trains along existing tracks instead. The Age also revealed the trains would likely run via the Metro Tunnel and exposed plans to run fast Geelong trains via Werribee and through the Metro Tunnel 2 — which appears to be the government's current plan.

It would take 18 minutes to the existing Footscray station and 11 minutes to an upgraded Sunshine station, 42 minutes to Caulfield and 60 minutes to Clayton.

This compares with SkyBus services running every 10 minutes from Southern Cross to the airport, taking 28-32 minutes during the peak and 23 minutes on average.

The final route means the governments have not taken up a private-sector offer of up to $7 billion to build a seven-kilometre tunnel from Southern Cross to West Footscray, that would have seen airport trains run every 10 minutes with trips taking 20 minutes.

The consortium led by super fund giant IFM Investors, and comprising Melbourne Airport, Southern Cross station, Metro Trains was told on Friday that the market-led proposal first pitched in 2018 was not going ahead.

A spokesman for IFM Investors said they were disappointed the proposal was rejected, but was committed to continuing to work with both tiers of government to "grow the retirement savings of millions of working Australians".

Victorian Transport Infrastructure Minister Jacinta Allan said that running airport rail via Sunshine meant the majority of Victorians could access the airport by rail, as quickly as possible.

"This will give Victorians the fastest, most direct trip to the airport through the Metro Tunnel, which will deliver more trains, more often," she said.

She said the final route delivered the best possible integration with the existing network, including the future suburban rail loop and paved the way for future improvements to regional and western metropolitan lines.

Urban Infrastructure Minister Alan Tudge the objective had always been to deliver a rail connection that was fast, affordable and built as quickly as possible.

"For those in the south east it will mean a trip to the airport without changing trains, and for others just one change," he said.

The project will also include upgrades to the Geelong line enabling a 50-minute commute from the city. This includes 12 kilometres of new track between Werribee and Laverton and a plan to run Geelong trains via Werribee, reviving an old route for Geelong trains.

The Geelong upgrades indicate that the government is ultimately planning to run fast Geelong trains through the Melbourne Metro 2 – another underground train tunnel that has been planned but not committed to linking Newport and Clifton Hill via Fishermans Bend.