What’s the big deal? Meghan Markle breaks cover for first time since she ignited a storm of criticism from former ‘Deal or No Deal’ colleagues after she said the show ‘reduced her to a bimbo’

Meghan Markle was spotted enjoying a shopping day with a friend in California as she faces backlash for comments she made about her role as a Deal or No Deal ‘briefcase girl,’ saying the show ‘reduced her to a bimbo.’

The Duchess of Sussex enjoyed a stroll around shops on Friday in Montecito, where she lives with Prince Harry and their two children.

The royal was sporting a strapless black jumper with flat sandals, sunglasses, and a wide brim hat. She was also seen with an olive colored sweater draped over her shoulders.

Meghan was carrying goods from Wendy Foster, a high-end women’s fashion boutique that specializes in sportswear where clothes go for hundreds of dollars. The shop’s website only sells gift cards to its stores that go for as high as $1,000.

The outing comes as the Duchess faces a storm of criticism from high profile TV personalities and former colleagues from Deal or No Deal about her comments on the game show. 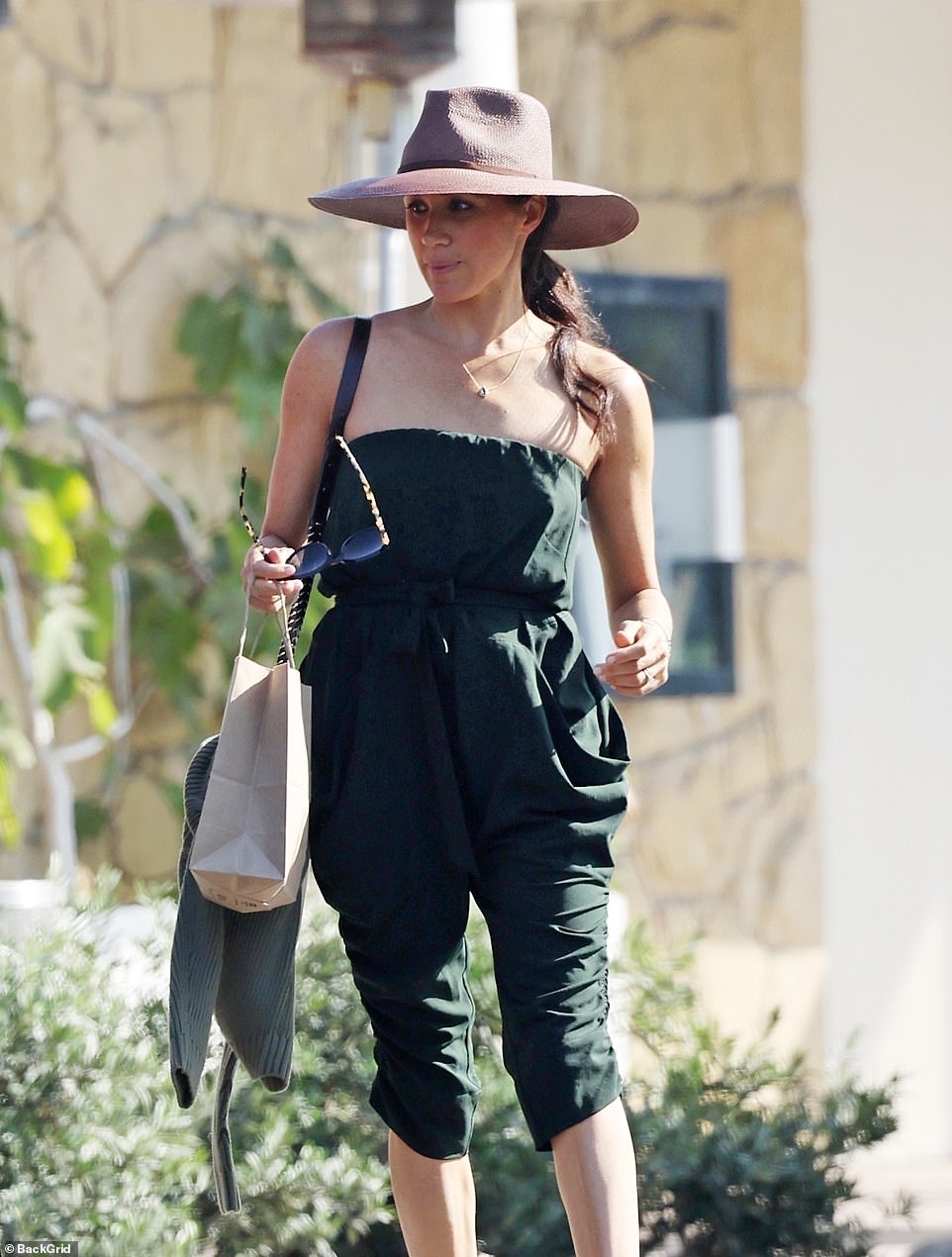 Meghan Markle was seen enjoying a shopping day on Friday afternoon in Montecito, California, (above) where she lives with Prince Harry and their two kids 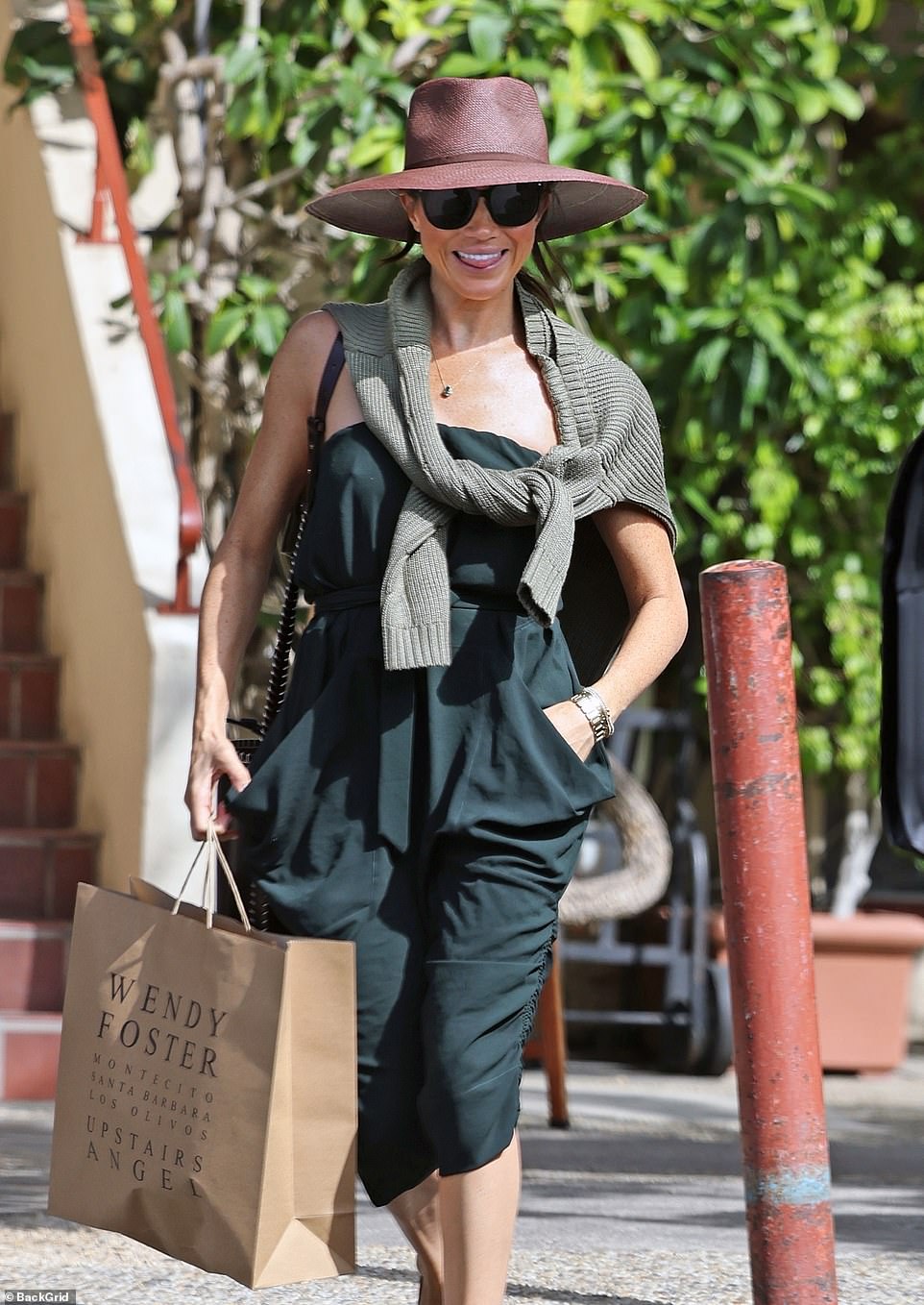 She was seen wearing a strapless black jumper with flat sandals, sunglasses, and a wide brim hat 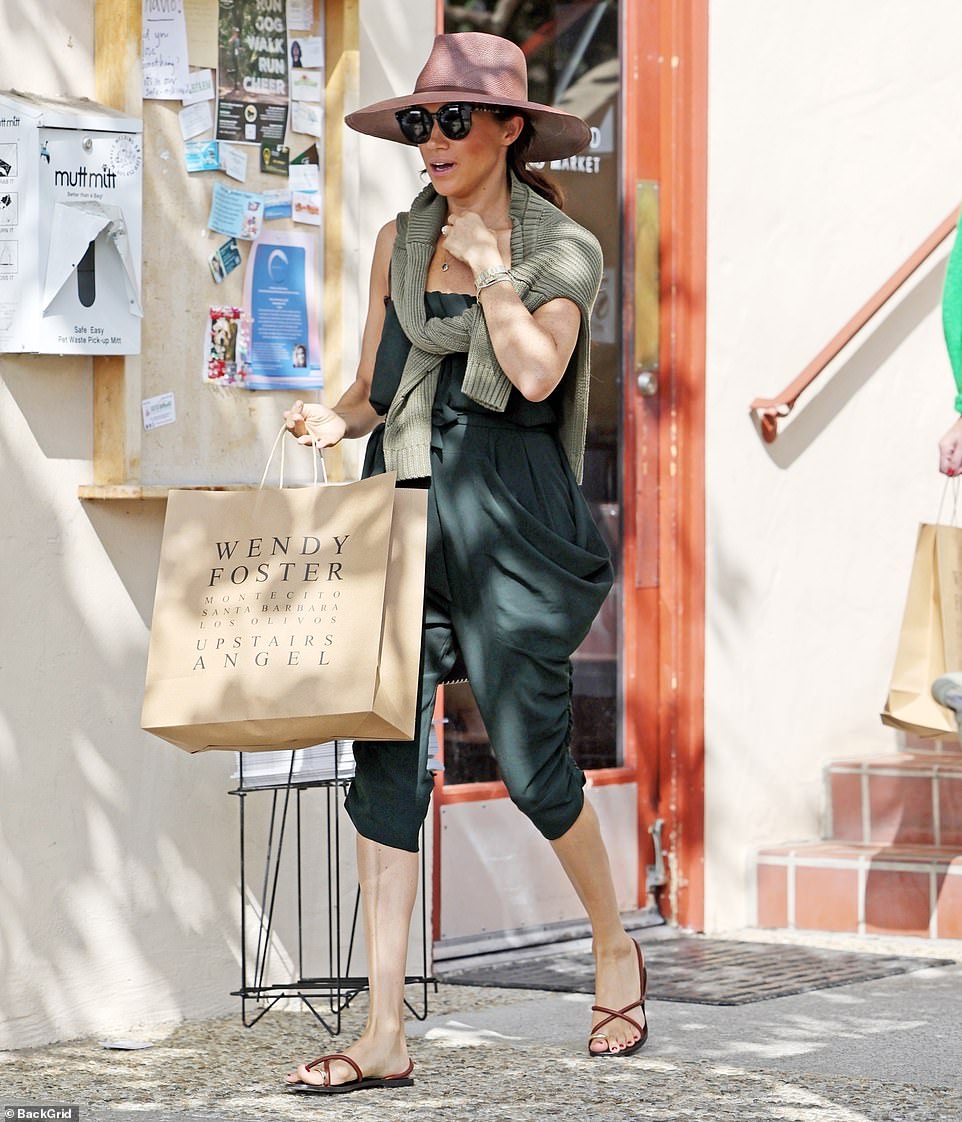 Meghan was also seen showing off a bag of goods from Wendy Foster, a high-end women’s fashion boutique that specializes in sportswear where clothes go for hundreds of dollars 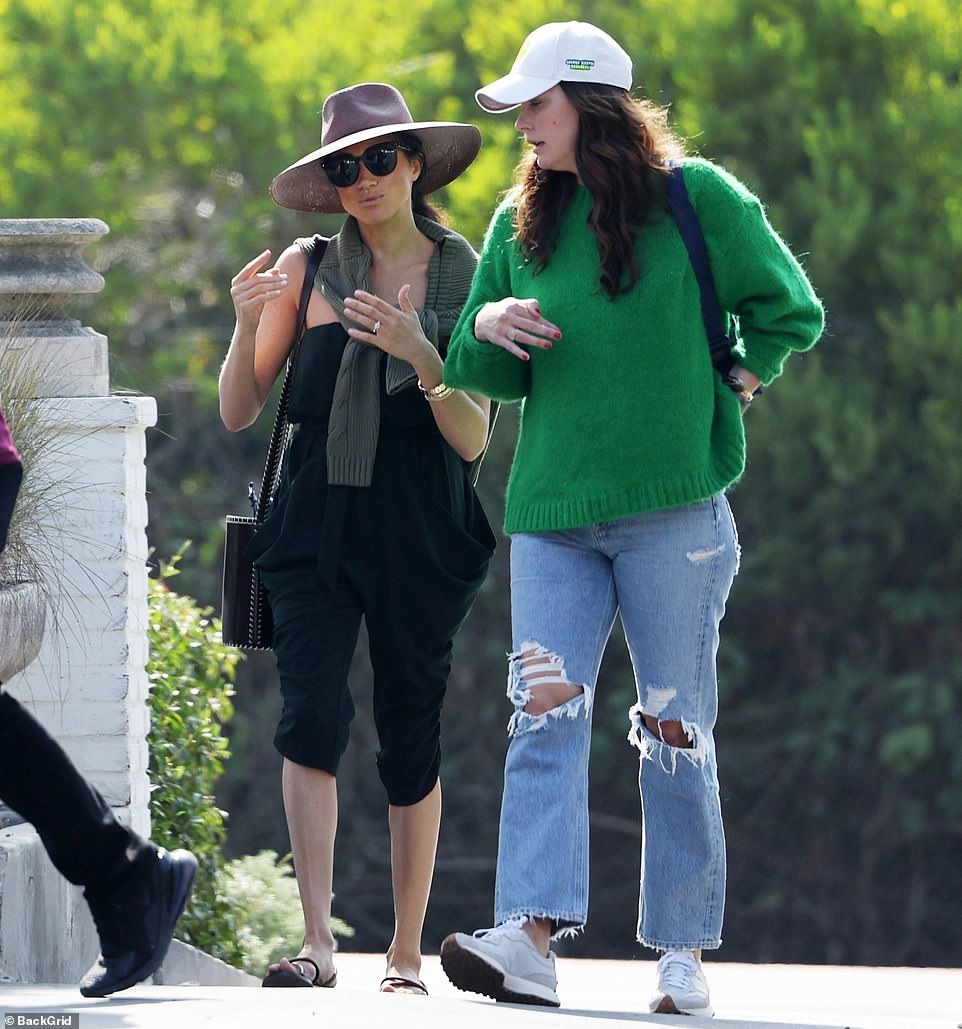 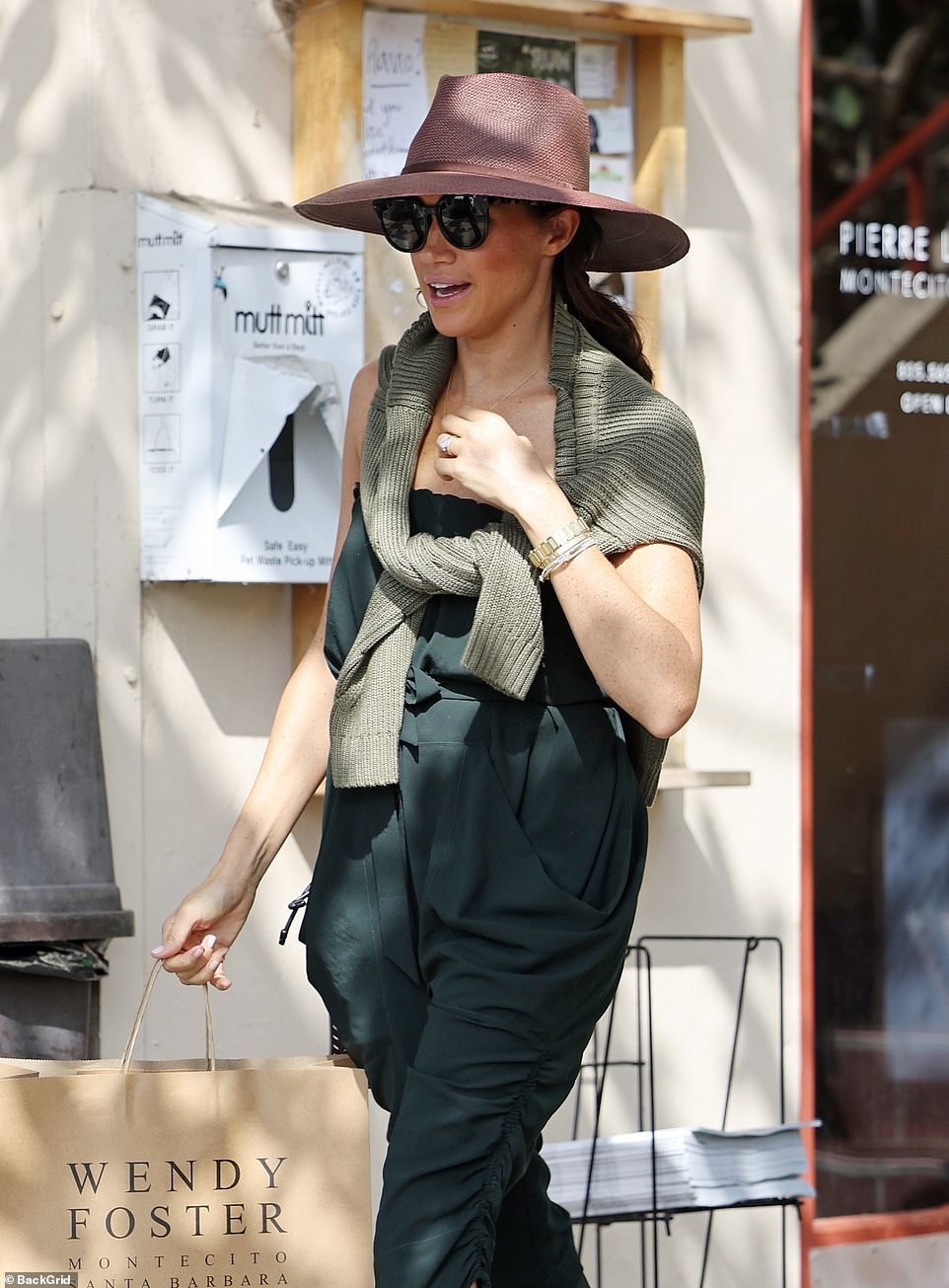 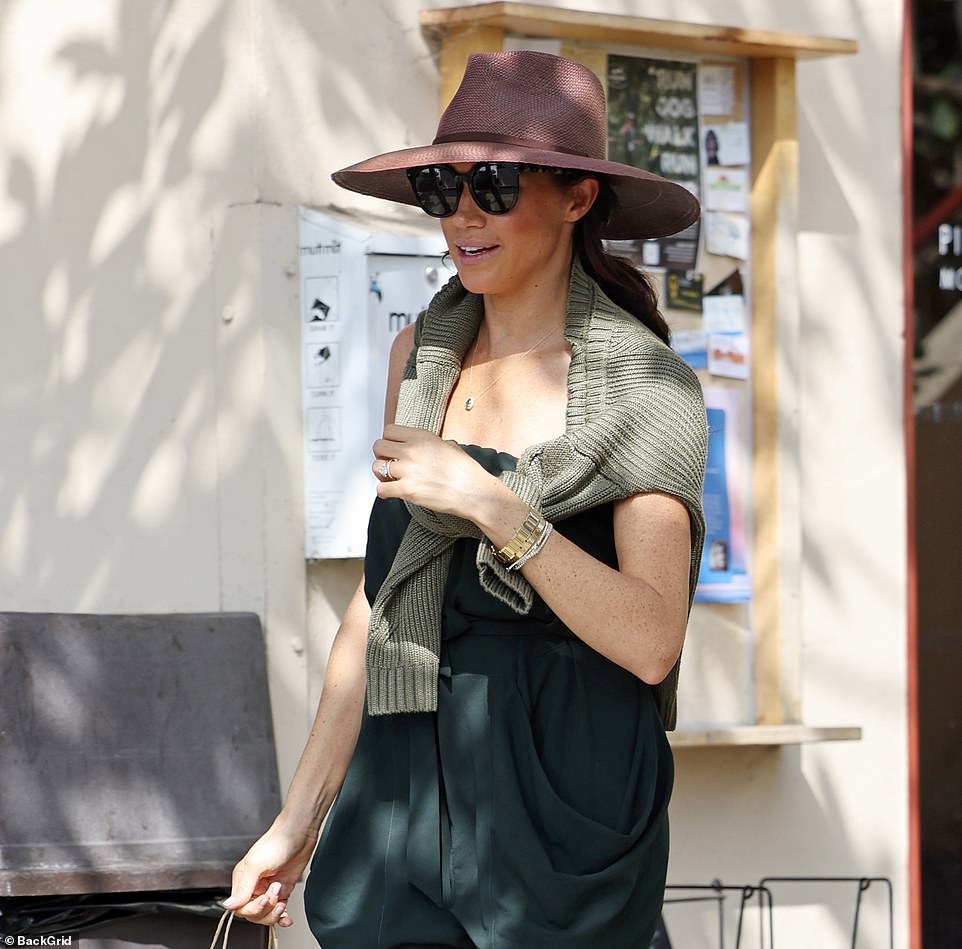 Along with her trip to Montecito’s Pierre La Fond high-end shopping outlet, Meghan was seen stopping for lunch in nearby Santa Barbara.

The Duchess enjoyed the outing with a friend, who sported a green sweater, torn up jeans and a white cap.

The outings served as a chance for Meghan to unwind after garnering backlash over comments she made about her role in Deal or No Deal on her podcast.

Actress and chat show host Whoopi Goldberg said Meghan’s remarks were naive. ‘That’s TV, baby. But what did you think you were going to? You know that’s what the show was,’ she said. ‘When you’re a performer, you take the gig.’

Women who appeared on the show at the same time as Meghan, meanwhile, tell a rather different story from the Duchess. They say the atmosphere was fun rather than oppressive or sleazy.

One of the briefcase girls who worked with Meghan was Lisa Gleave, a successful Australian model, TV presenter and actress now living in LA.

Like Meghan, she had to master the art of walking down stairs in a skimpy dress and five-inch heels, holding a briefcase and remembering the cardinal rule: look delighted for the contestant if things go well for them and sad if not.

Gleave told the Mail of her stint on Deal Or No Deal that she felt ‘blessed and lucky to have been on it’, adding: ‘For me it was a joy and a great career move. Most of the girls would say that.’

She said: ‘I never looked at it as a show that objectified women. The cast and crew treated us very well. It was a professional set. For many of us, it was a stepping stone on our careers and we went on to greater things.’

While Lisa acknowledged the show ‘revolved around beautiful women’, they were ‘all smart and intelligent women and nobody treated us like bimbos’. 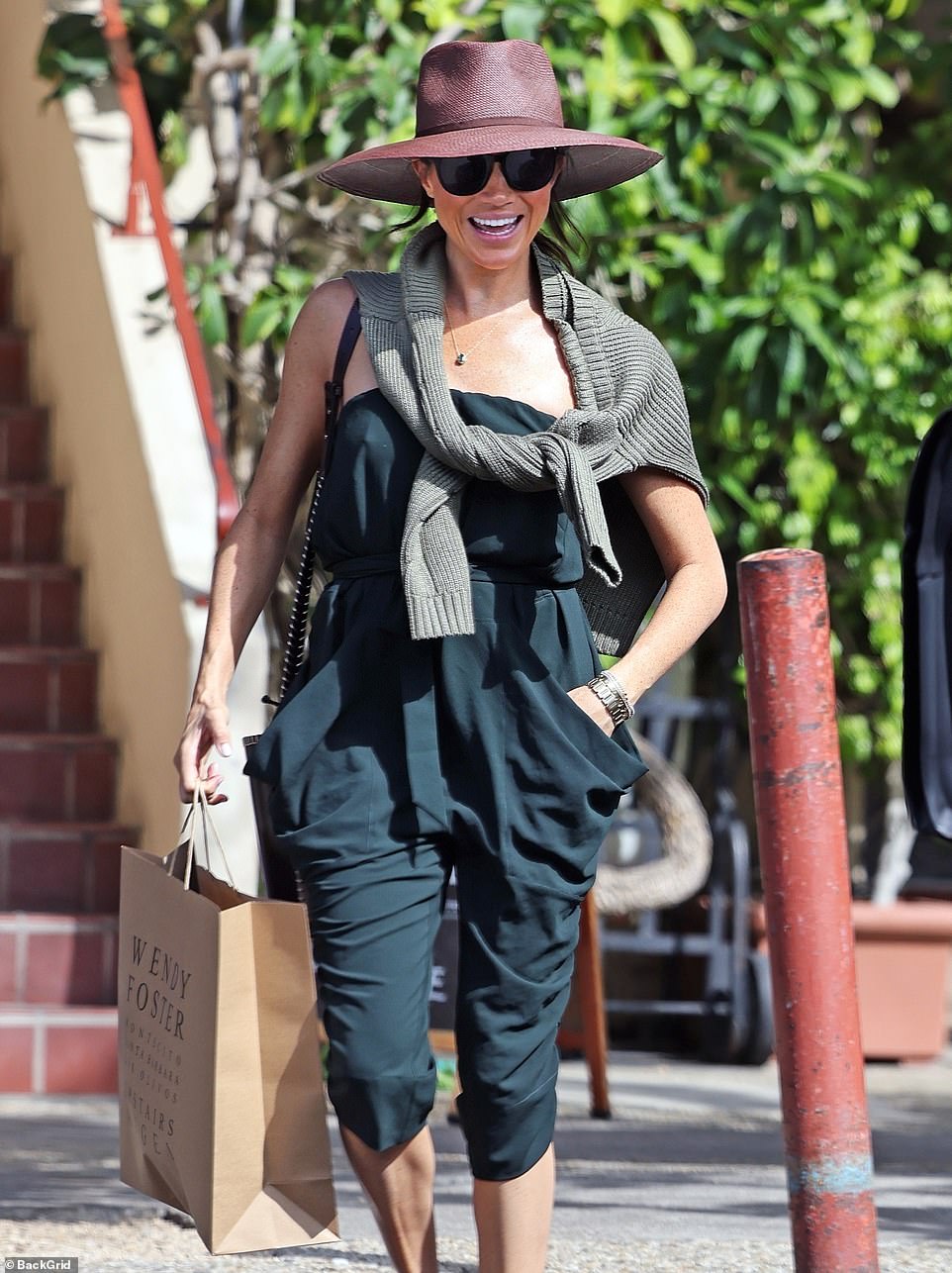 The happy shopping day coincides with a flurry of backlash Meghan received over her dismissive comments about working as a model on the hit game show, Deal or No Deal 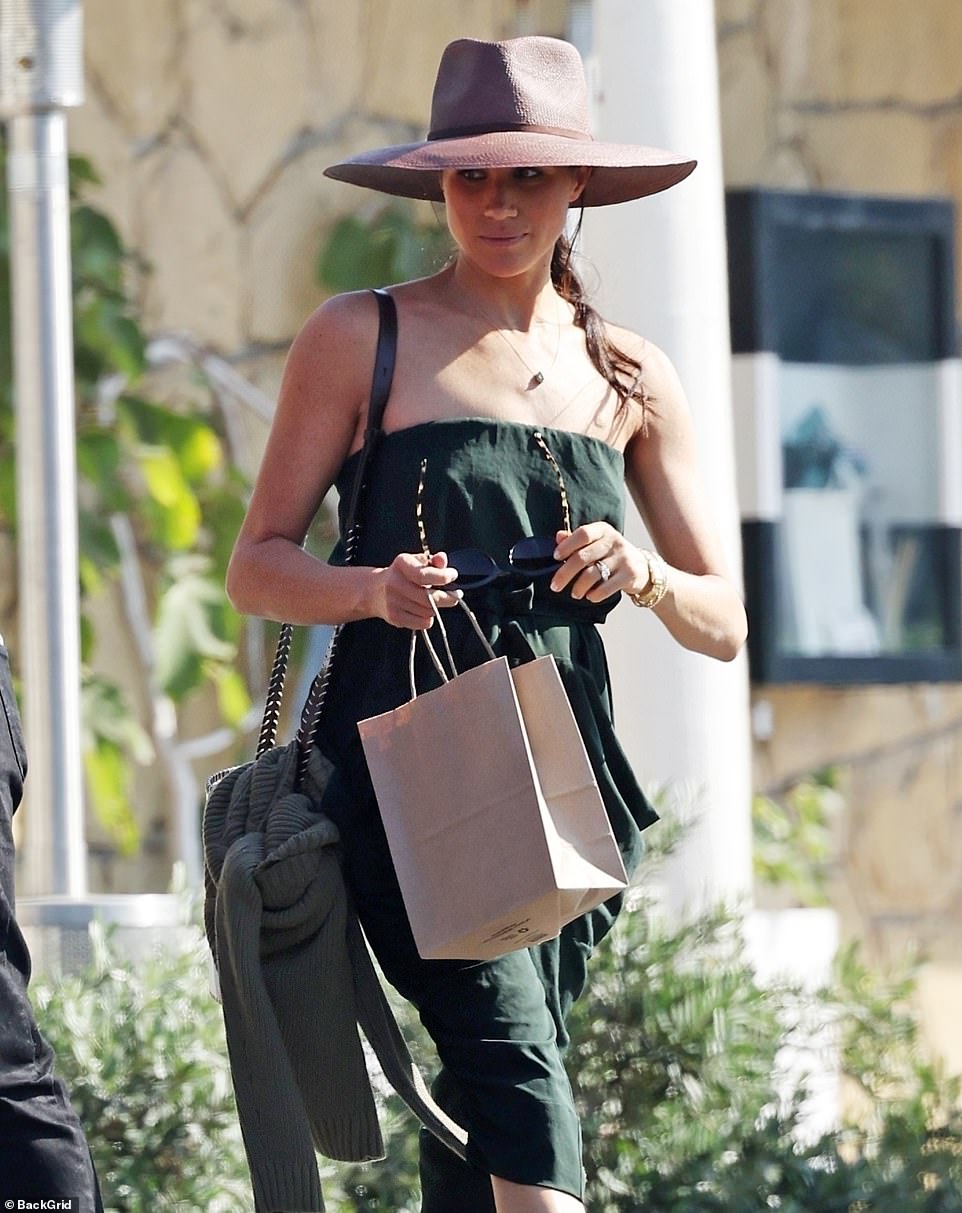 The fledgling actor landed the role in 2006 and worked as a briefcase model for 34 episodes, but Meghan now says she does not look fondly on those days on TV, saying she ‘reduced’ to a ‘bimbo’ 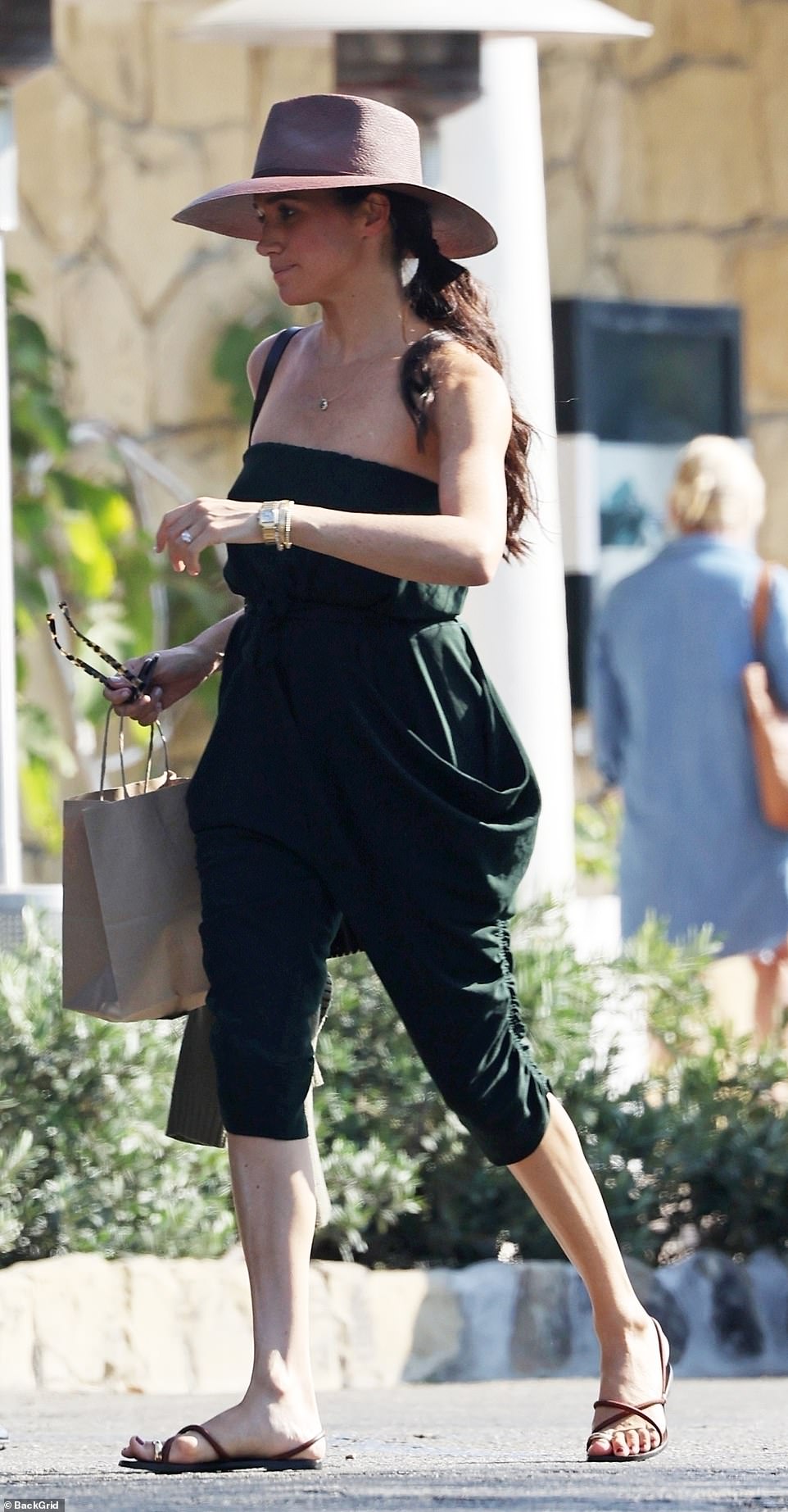 ‘It was solely about beauty and not necessarily about brains,’ Meghan said on her podcast this week 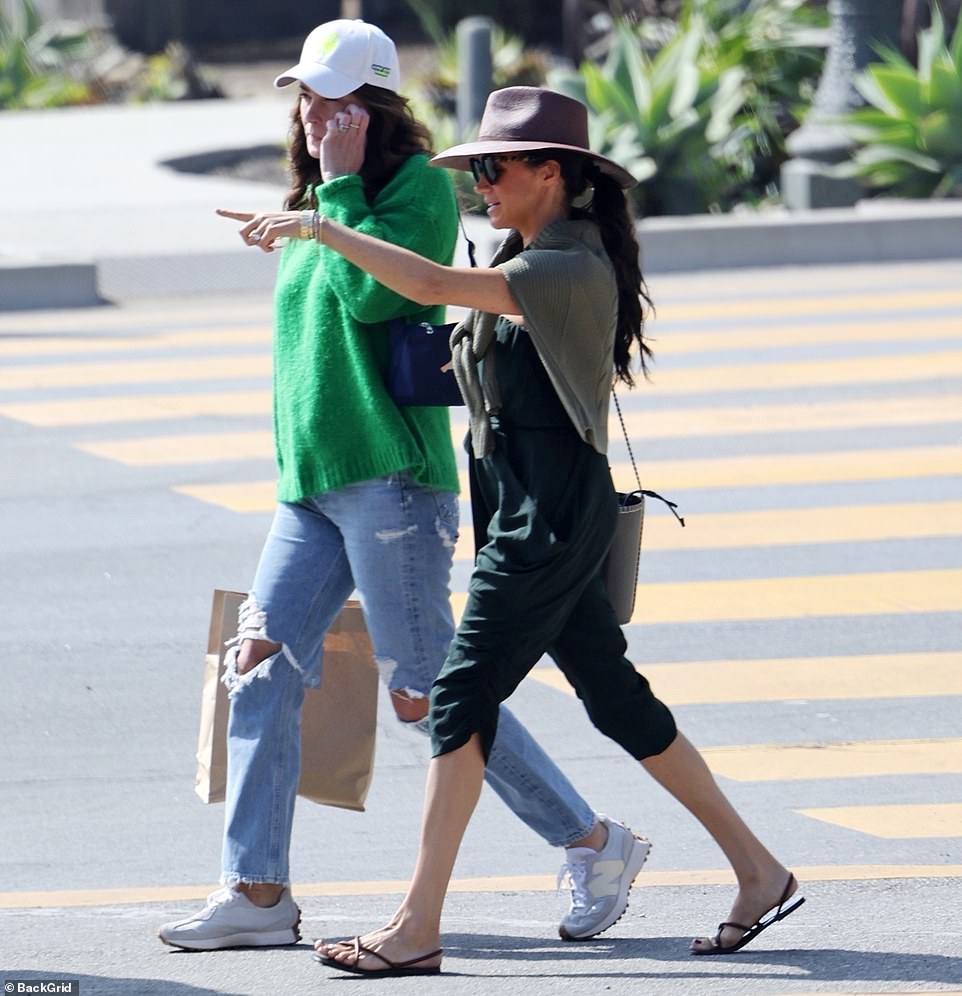 Pictured: Meghan out shopping with her friend as criticism poured in about her comments of the show 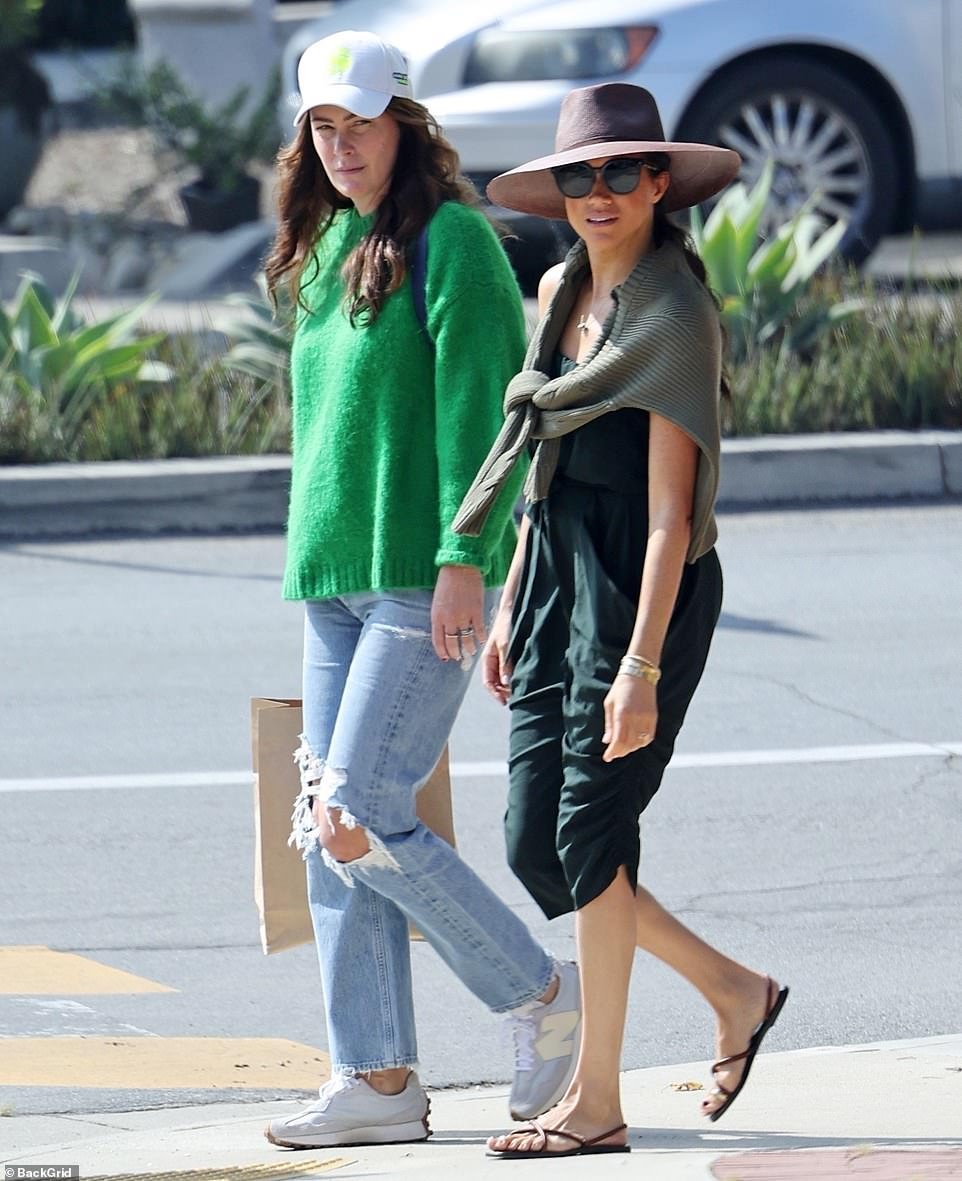 Meghan attempted to tie in her comments to the themes of archetypes of her show, but many claim she was being derogatory towards her fellow models on the game show 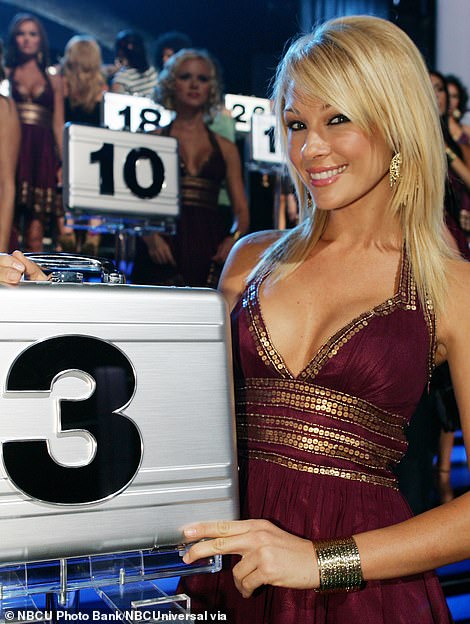 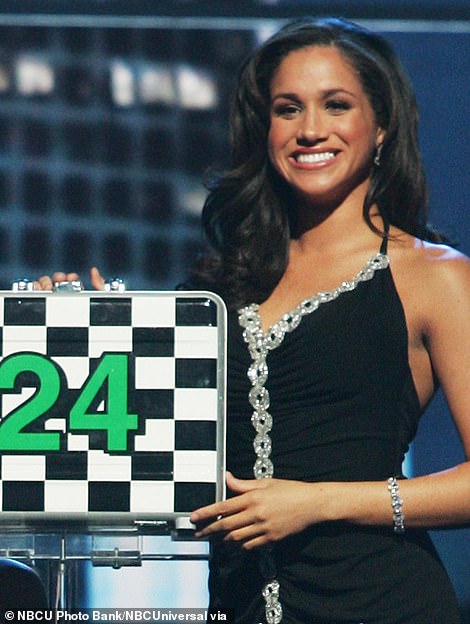 Lisa Gleave (left) who also worked as a model on Deal or No Deal condemned Meghans comments. Meghan is pictured as briefcase model No. 24 (left) while on the show for 34 episodes

Dina Cerchione, a stylist who worked on Deal or No deal as well as for shows across several networks including CBS, NBC, ABC, Netflix and HBO, said ‘it’s been a rough week watching a show I love so much be criticized.’

‘It was one of the most wonderful, challenging, high-profile gigs of my career and I loved every minute of it,’ she wrote on Instagram.

‘Everyone on the show from my wardrobe team to the producers, the crew, hair and makeup, Howie and especially the models worked SO very hard to make the shows the best they could for the contestants and the fans who adored it.

‘I have thought a lot about this, I wouldn’t change a thing.

‘We all knew how lucky we were and how special our TV family was. There was a mission at work to do the best we could, take care of our full team and treat everyone with the respect they earned and deserved.’

Cerchione also said the show was ‘a launch pad for so many of the women,’ noting ‘hosting and being on other television shows,’ and even ‘being on Oprah’ — a possible reference to Meghan’s bombshell interview. 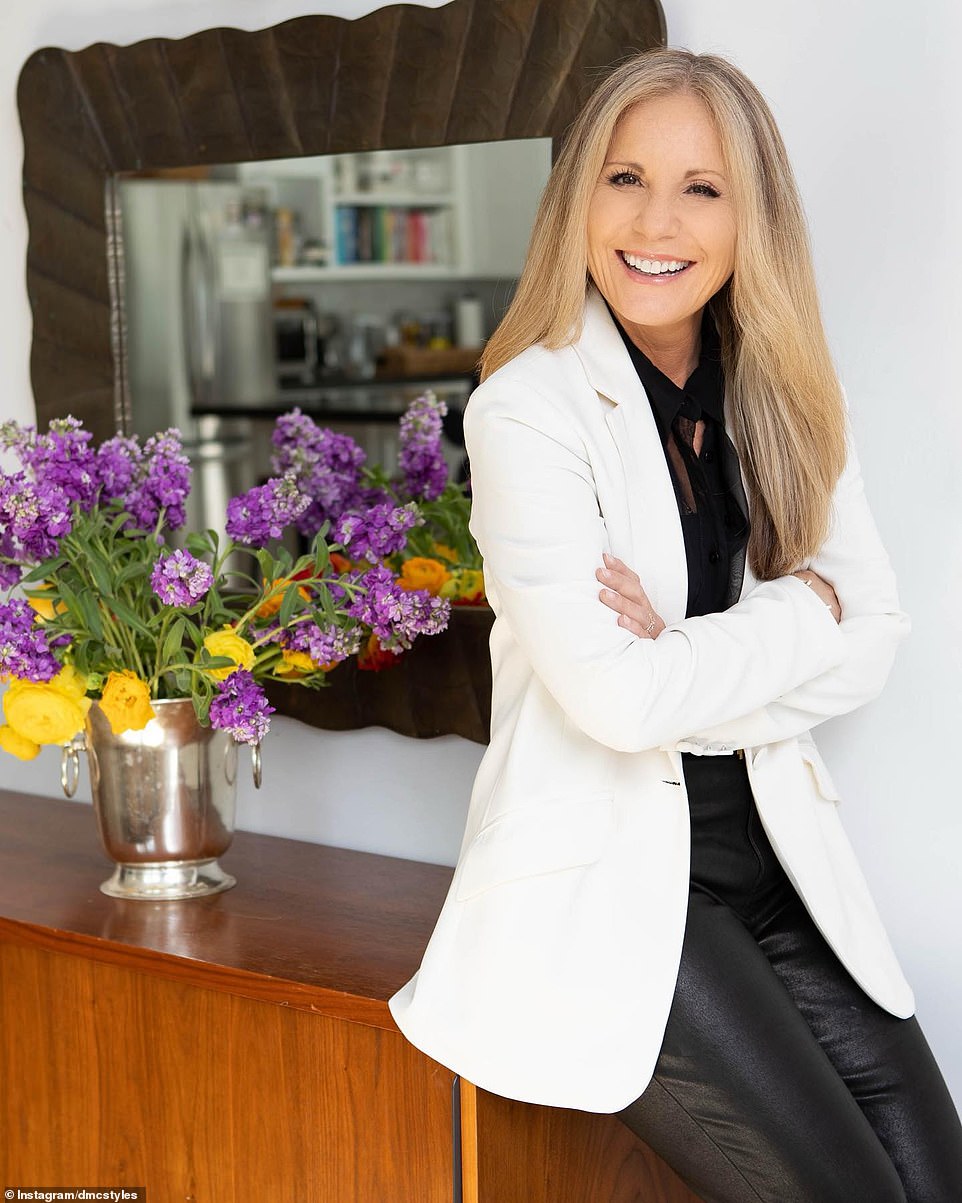 Hollywood stylist Dina Cerchione (pictured), who worked on ‘Deal or No Deal,’ responded to comments by Meghan Markle, who said she felt ‘objectified’ by the show 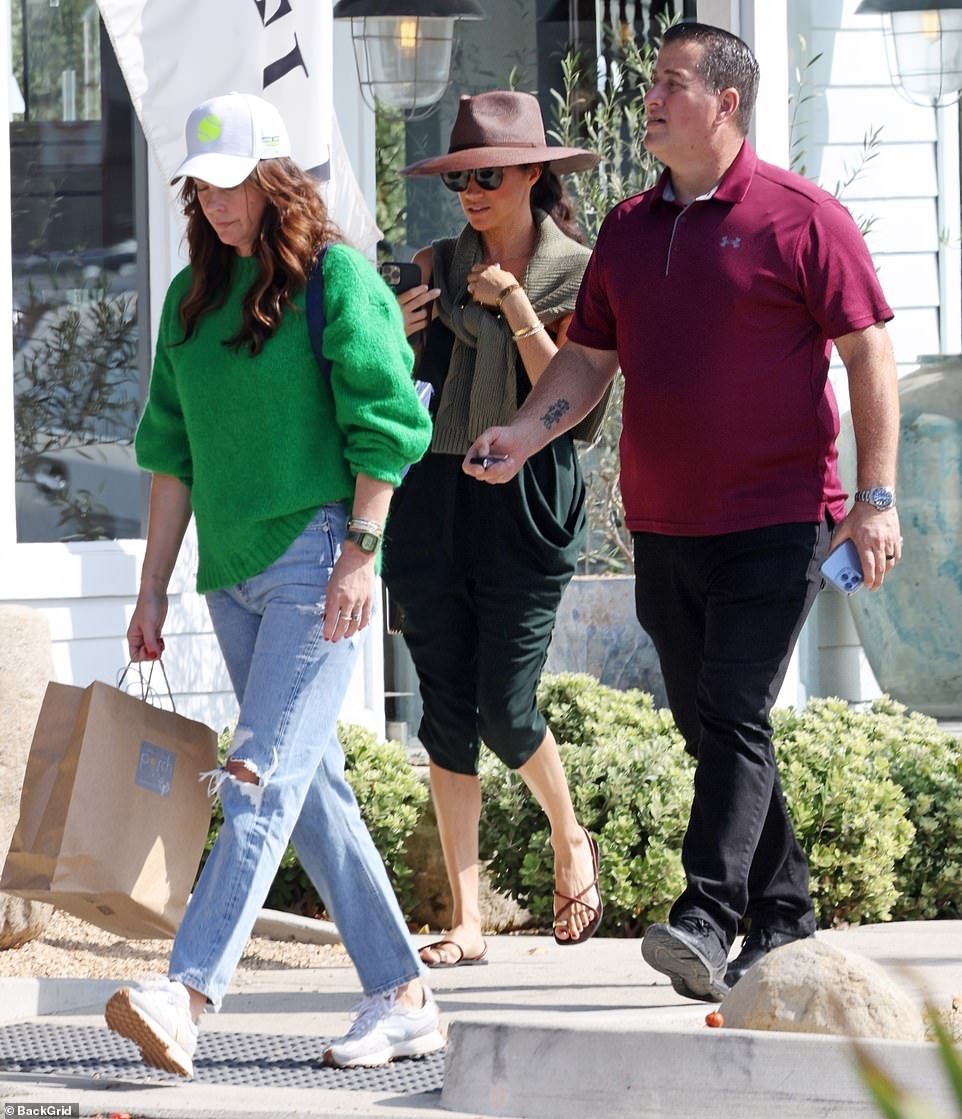 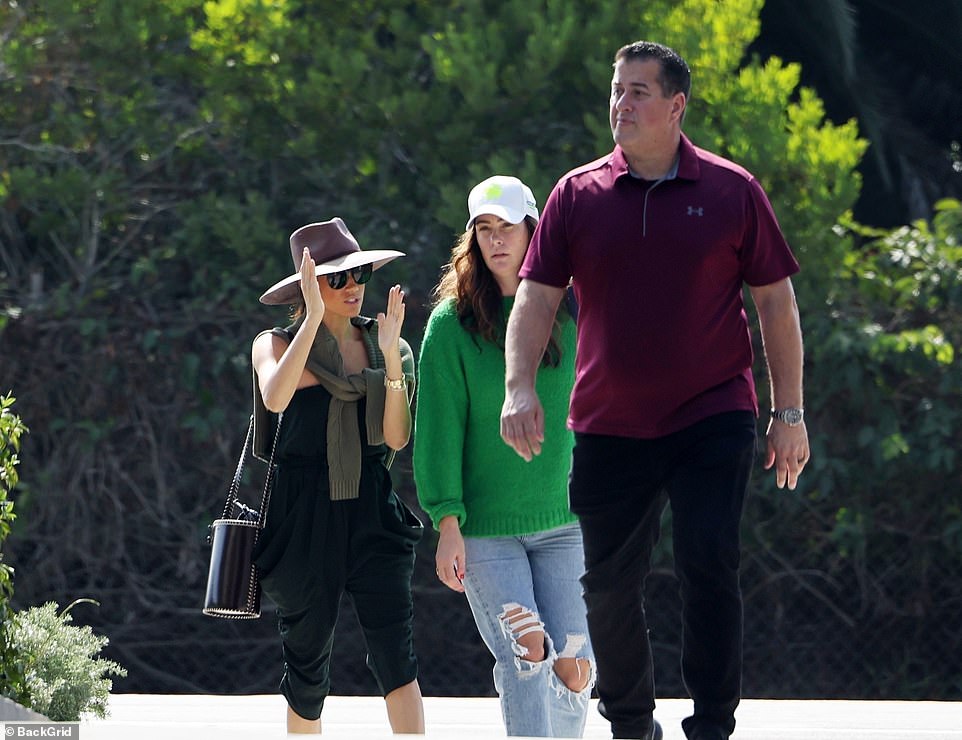 Pictured: Meghan and her friend being escorted to their car by following their shopping outing on Friday 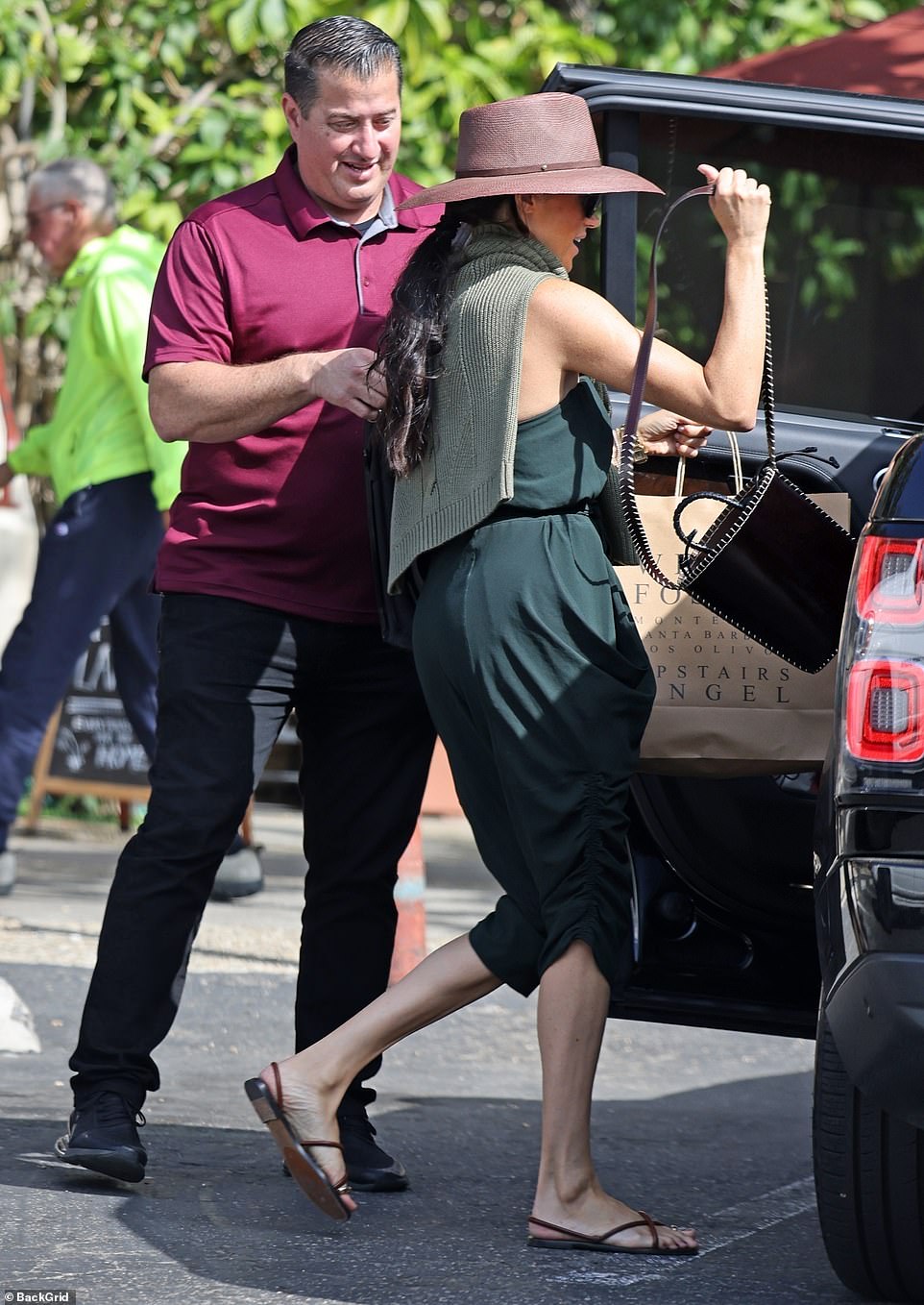 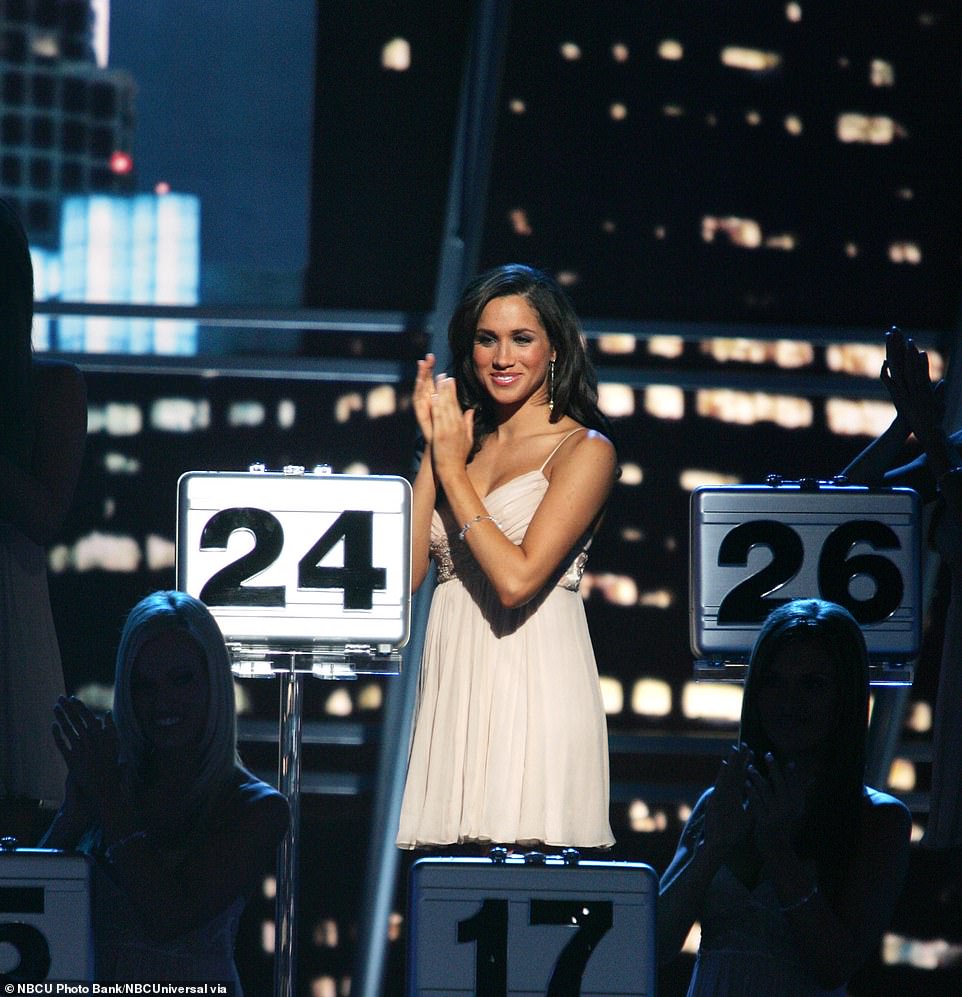 Cerchione on Markle’s remarks: ‘There was a mission at work to do the best we could, take care of our full team and treat everyone with the respect they earned and deserved’

Alike Boggan was another contemporary of Meghan who said she enjoyed working on Deal Or No Deal and had no problem with what she was asked to do on the show.

‘I was there from the very first episode and I loved every minute of it. It was a great job and a great opportunity,’ she told the Mail.

‘There was an emphasis on us girls looking our best but it’s showbusiness — an aesthetic industry — and it didn’t bother me at all.’

Alike is now the mother of a toddler and a successful businesswoman.

‘I never felt uncomfortable and never felt there was anything undignified about it. I was grateful for the good salary and the good working conditions. I look back on it fondly.’ 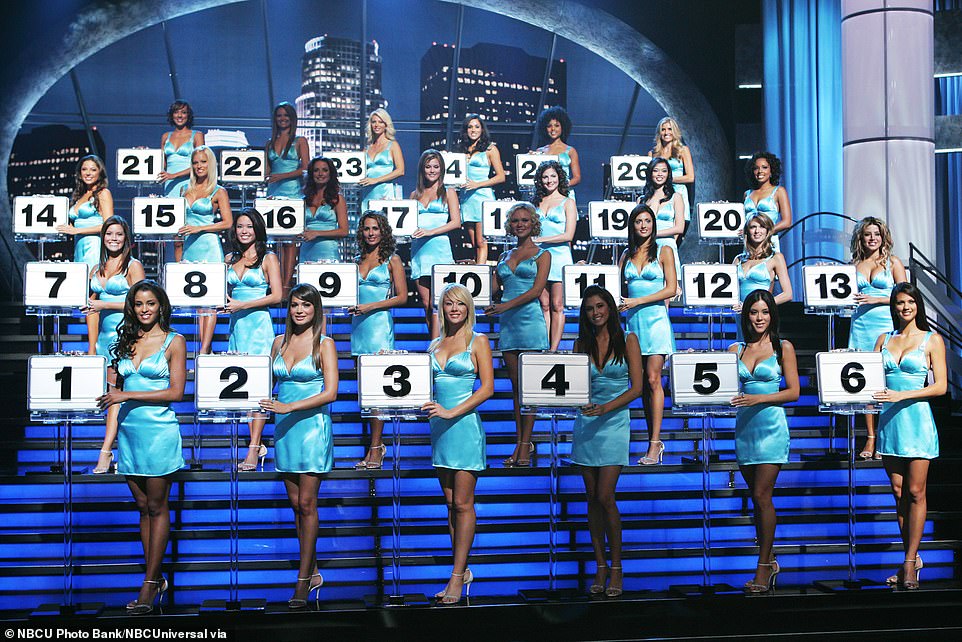 A former briefcase girl on the show, Lisa Gleave, added: ‘I never looked at it as a show that objectified women’ 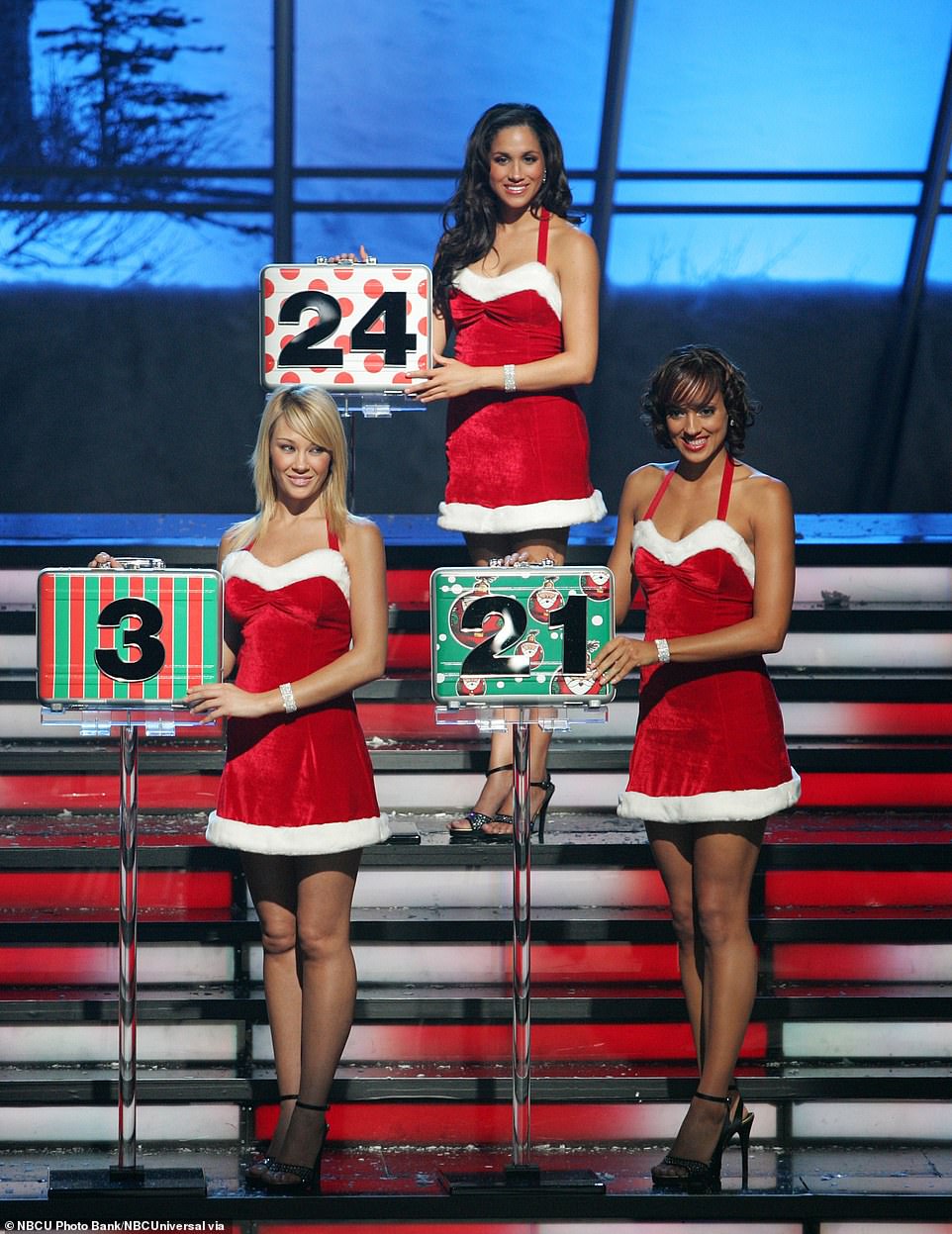 ‘For clarity — yes getting a modelling gig on a game show isn’t necessarily about your intellect, but every show the executive producers picked five models with the most outgoing and fun personalities to place mics on, who they knew would engage with the contestants,’ Gleave said

In the latest episode of Archetypes, the woman once known as ‘Briefcase No 24’ considered the show to be an exploitative bear pit of sexism and female objectification when she worked on Season Two in 2006, until the humiliation of being treated like a bimbo simply became too much and she had to quit. Although not, she omitted to mention, before she’d appeared in 34 episodes.

She provided an all-too familiar account of life in the pre-#MeToo era, a time when scores of women were routinely subjected to sexism, misogyny, exploitation and, in many cases, horrific sexual abuse and harassment at the hands of co-stars and directors.

Meghan clearly resented how ‘the girls’ in the show had to prepare themselves for each episode: ‘having your lashes put on or your extensions put in, or the padding in your bra — we were even given spray-tan vouchers each week’.

‘There was,’ she added, ‘a very cookie-cutter idea of precisely what we should look like. It was solely about beauty and not necessarily about brains.’

While being grateful for the money, she left the show — in which contestants guess which of 26 briefcases contain cash prizes rising to $1 million — because it made her feel ‘not smart’, adding: ‘I would end up leaving with this pit in my stomach, knowing I was so much more than what was being objectified on this stage. I didn’t like feeling forced to be all looks and little substance.

‘And that’s how it felt for me at the time — being reduced to this specific archetype.’