MILLWALL fans are notorious for singing “no one likes us we don’t care” but it turns out they actually do have a gang of loyal supporters… only they are 1,500 miles away in RUSSIA.

Gathering each week in Churchill's Pub in Moscow to drink London Pride beer and eat fish and chips is a dedicated cohort of Russian fans. 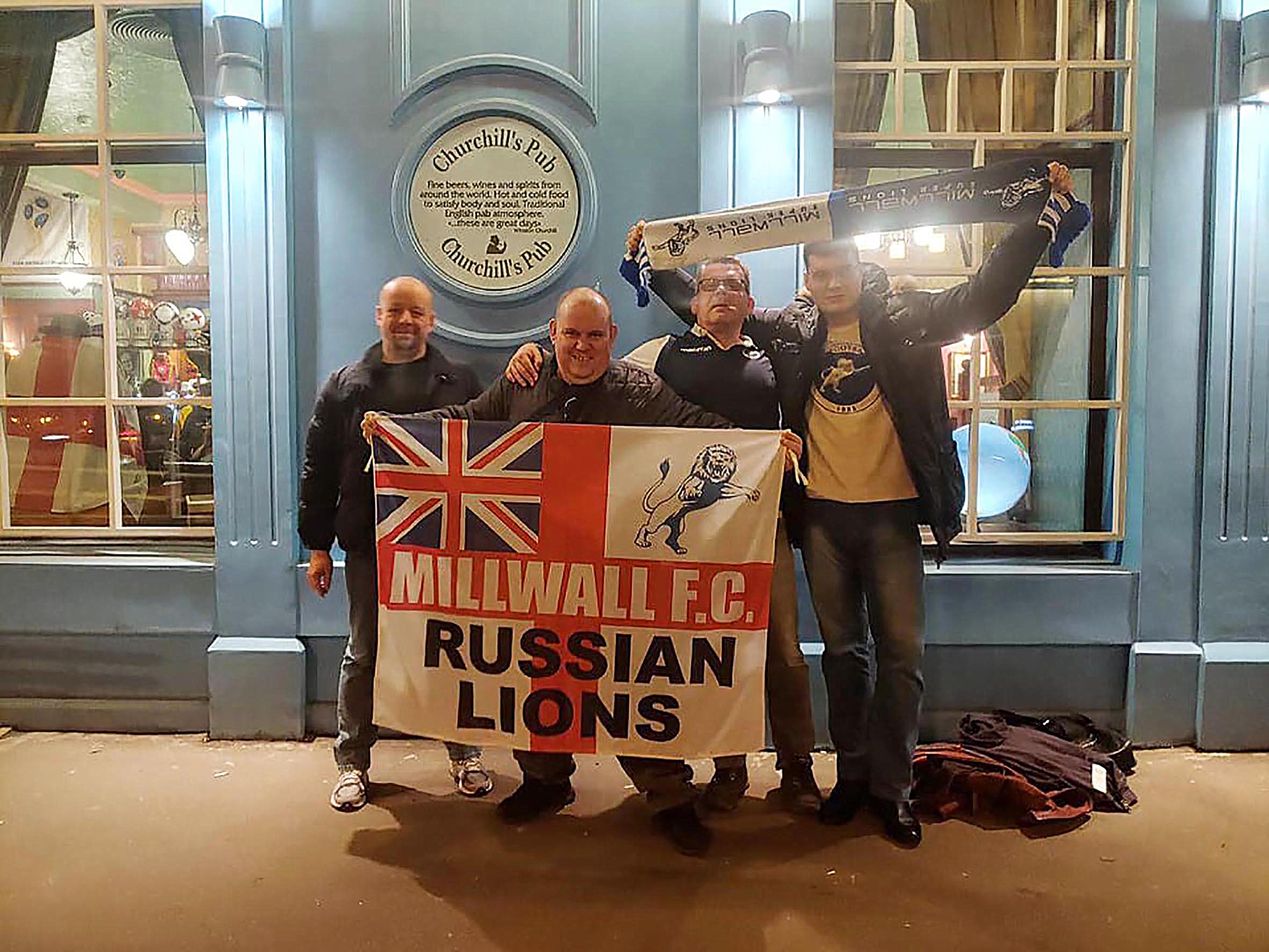 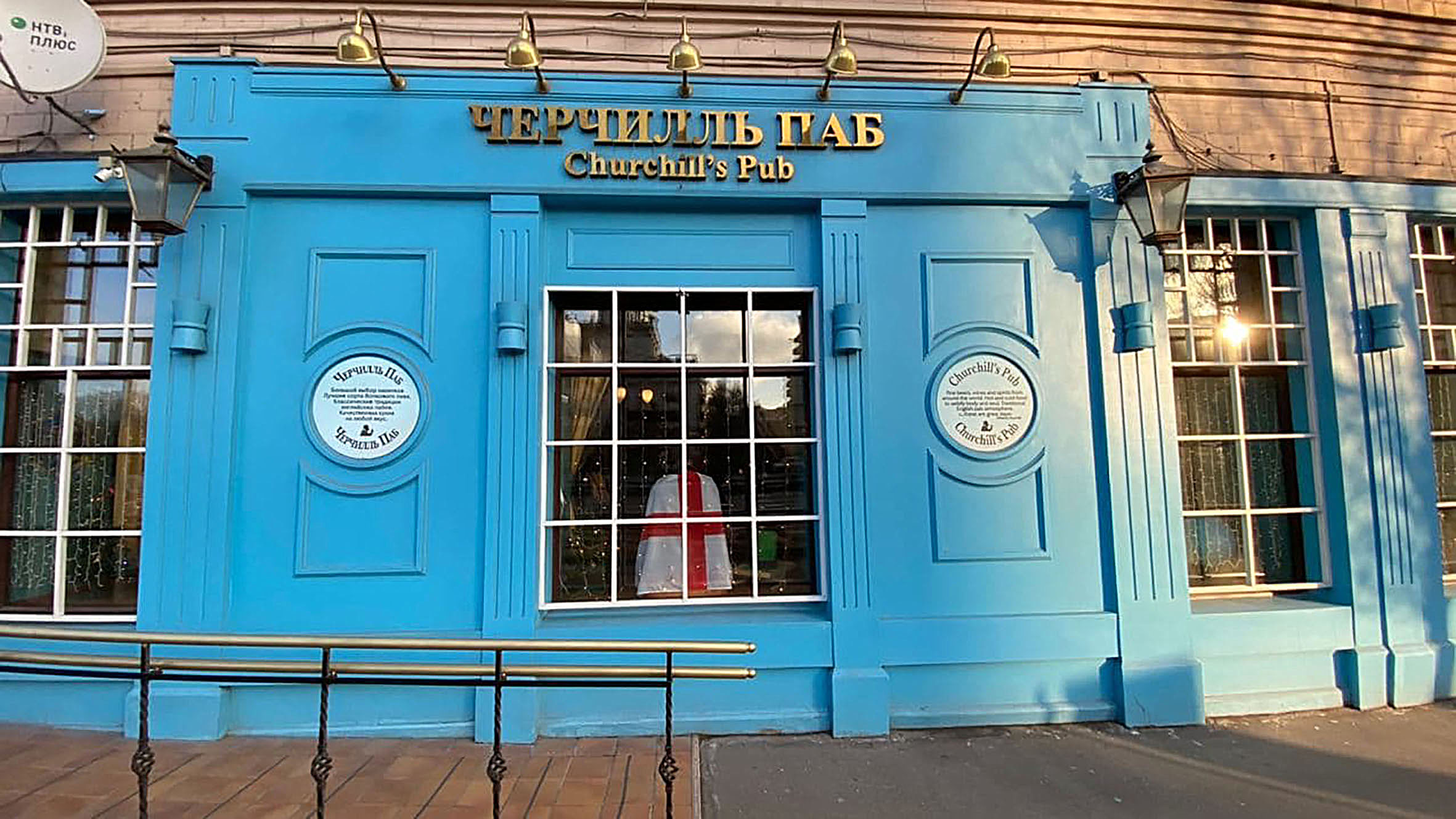 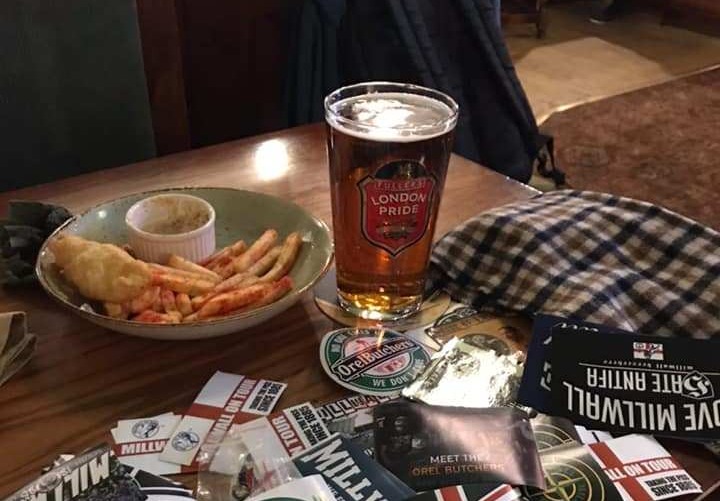 Calling themselves the "Russian Lions", The Sun Online tracked down the supporters who said they were drawn to the London side despite living half the world away from The Den.

Pictures from Churchill's Pub in the north eastern part of the Russian capital shows it decked out in the Millwall memorabilia, including a cabinet for signed photos of club legends.

It has a badge of the Millwall Supporters' Club Russia on the wall, and hanging proudly is White Ensign flag emblazoned with "Millwall F.C. Russian Lions".

Pints of London Pride and Bishop's Finger can be seen on the table along with plates of fish and chips as the anglophiles tune in to watch their chosen club.

And the supporters said they often come to the UK and visit The Den – but have been left unable to in 2020 due to Covid-19.

Speaking of their support, Russian fans said it was the side's working class roots that most appealed to them, not the infamous reputation for hooliganism.

Despite this a number of the Moscow Lions branded jail sentences handed out to two Russian "Ultras" who brutally attacked an England fan in France as "harsh".

"Millwall is my second family, I have been in England at many home and games, including in Cardiff at the FA Cup final against Manchester United in 2004," Maxim Prokhoroenko, 41, the head of Russian supporters club, told The Sun Online.

"Thanks to the Millwall family for the always warm welcome, for organising trips and tickets for matches, for sheltering us in London, for thousands of pints of beer bought for me in pubs."

The Sun Online spoke to the Russian fans after a storm hit Millwall when supporters at The Den booed players for taking a knee.

Booing fans were blasted by the the FA, the EFL, players, and politicians – with even the club itself saying it was "saddened" by the scenes at The Den.

But Prokhoroenko, an aircraft engineer, defended the scenes – however insisted him and his pals are "anti-racist".

He claimed the gesture's link to the Black Lives Matter movement has turned off some Millwall fans, including those in Russia.

The fan blamed attacks on war memorials and violent clashes with police for turning them away from BLM.

"All English football supporters, including those of Millwall, support the anti-racism message.  We will not support a political movement that disrespects our country," he said.

And other Russian fans claimed the boos were driven by a desire to keep politics out of football, branding taking the knee – which has been adopted across English football as a message of anti-racist solidarity – as "posturing".

Prokhoroenko explained he was introduced to the club while working with a British building firm on a job in Russia. 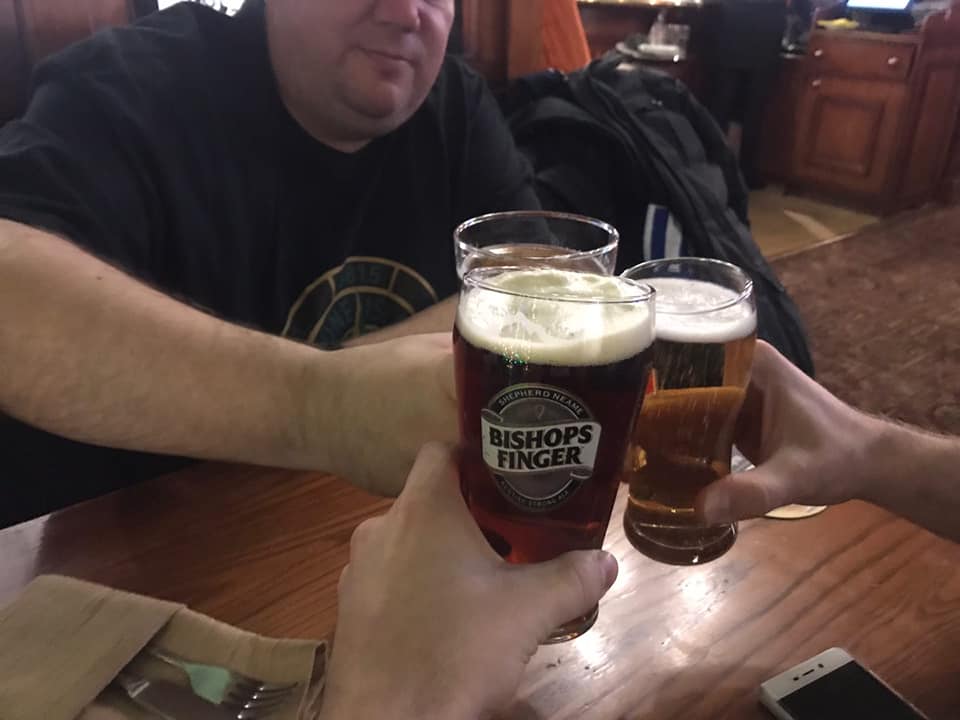 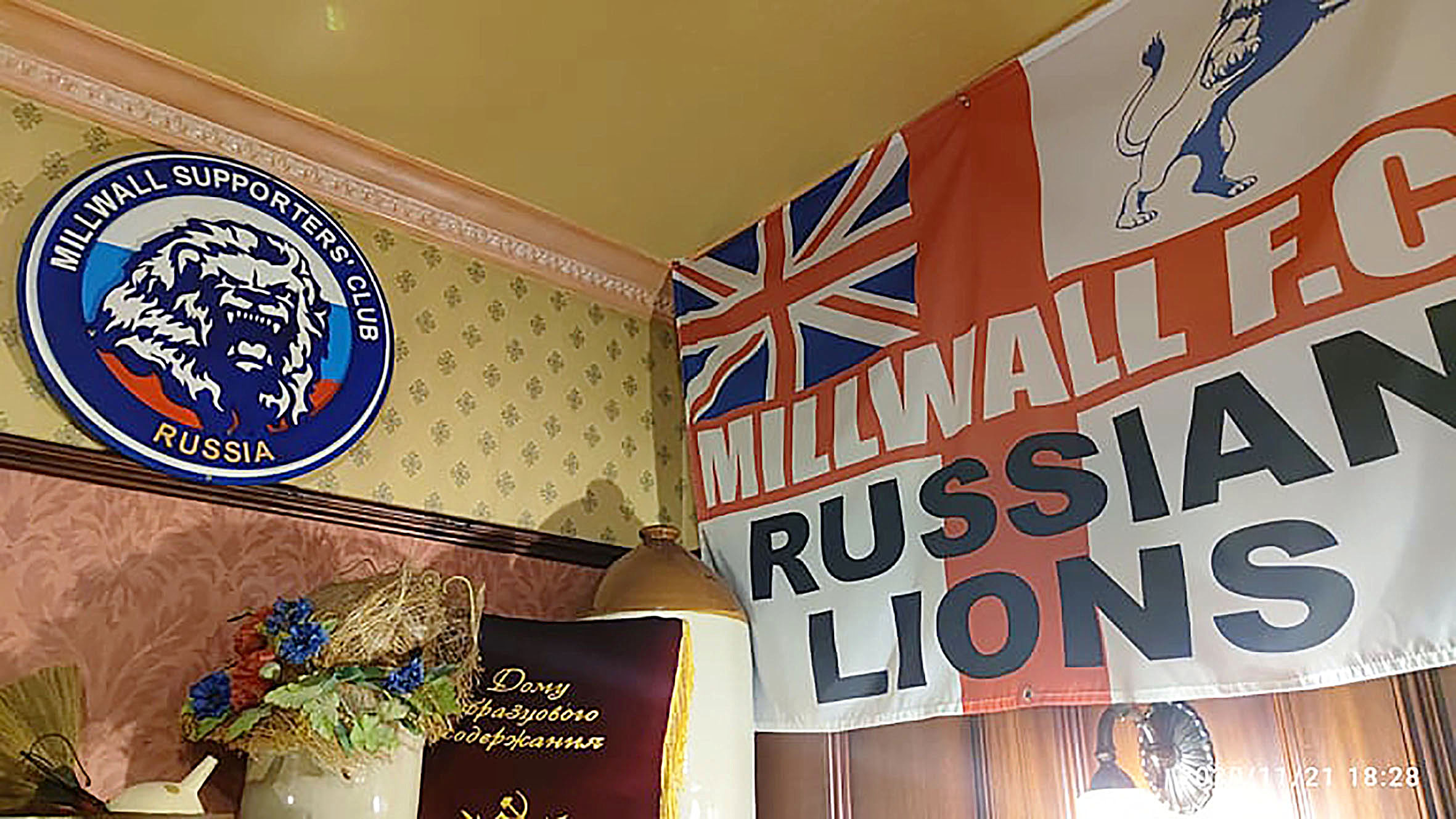 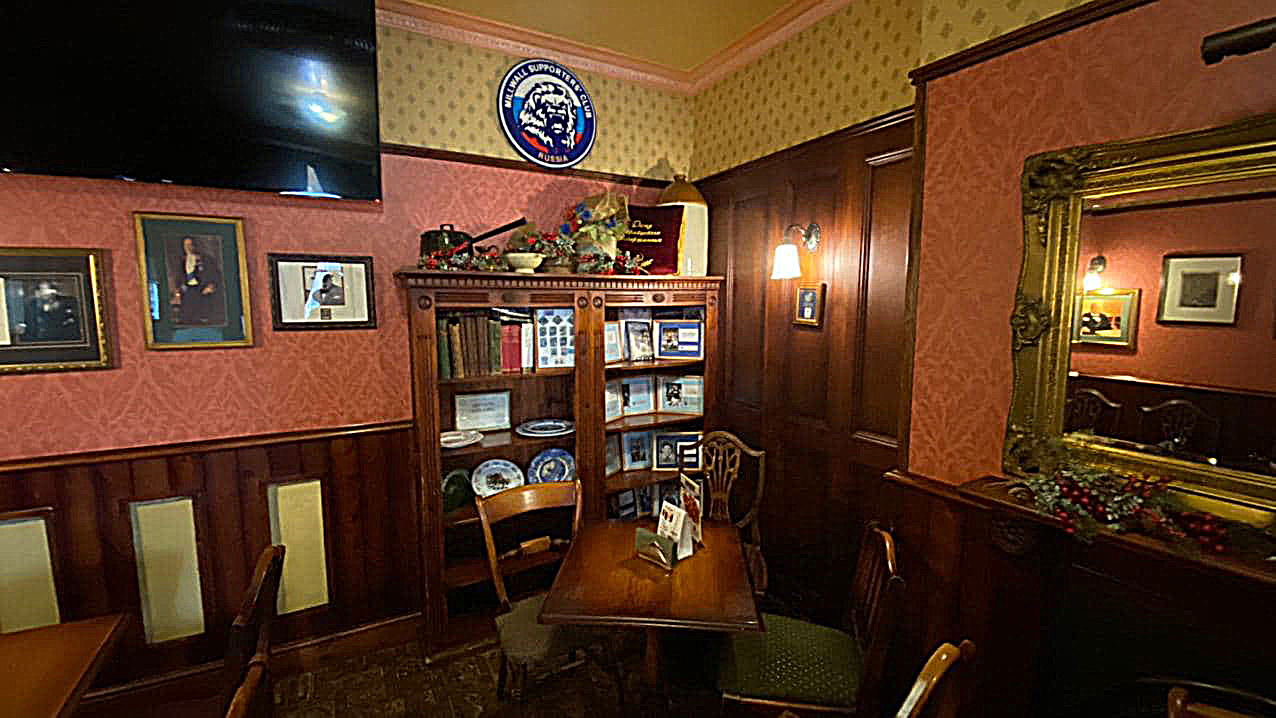 MILLWALL condemned their own supporters who booed the players taking a knee before their 1-0 defeat against Derby.

On the day as 2,000 home fans were allowed back in at Millwall, many overshadowed the occasion by verbalising their disgust at the gesture.

Players continue to use the gesture before kick-offs to highlight the ongoing fight to eradicate racial discrimination in society.

Although some clubs distanced themselves from supporting the Black Lives Matter movement directly for political reasons.

The booing at The Den took place just a day after Millwall had released a statement, signalling their intentions to keep taking a knee before matches until they unveil 'a new and comprehensive anti-discrimination strategy' in the New Year.

In statement, the Lions said the game was "marred" by the booing and the club was "dismayed and saddened".

Millwall player Mahlon Romeo said: "Don’t think you come to this ground and spread hatred. I feel really low — probably the lowest I’ve felt in my time at this club.”

Tory minister James Cleverly said: "Ultimately what those fans did was wrong."

Prokhoroenko said: "Most of workers there were from Birmingham and supported Birmingham City, but two lads were Millwall fans.

"They told me about this small club, and the Brummies said Millwall fans are the most terrible and the craziest in the whole world.

"So I thought, that's it, this world be my choice. If all English football fans are afraid of Millwall – it would be a proper club to support."

Millwall Supporters' Club Russia helps the growing contingent of Lions fans in Vladimir Putin's nation to get to games, organising tickets and transport.

However, all this has been put on hold due to "Covid sh*t".

Prokhoroenko and his pals said they try to get to games at The Den some "two or three times a year".

He shared with The Sun Online numerous pix of him at the ground, including posing with players and the club's former owner Dragons' Den star Theo Paphitis. 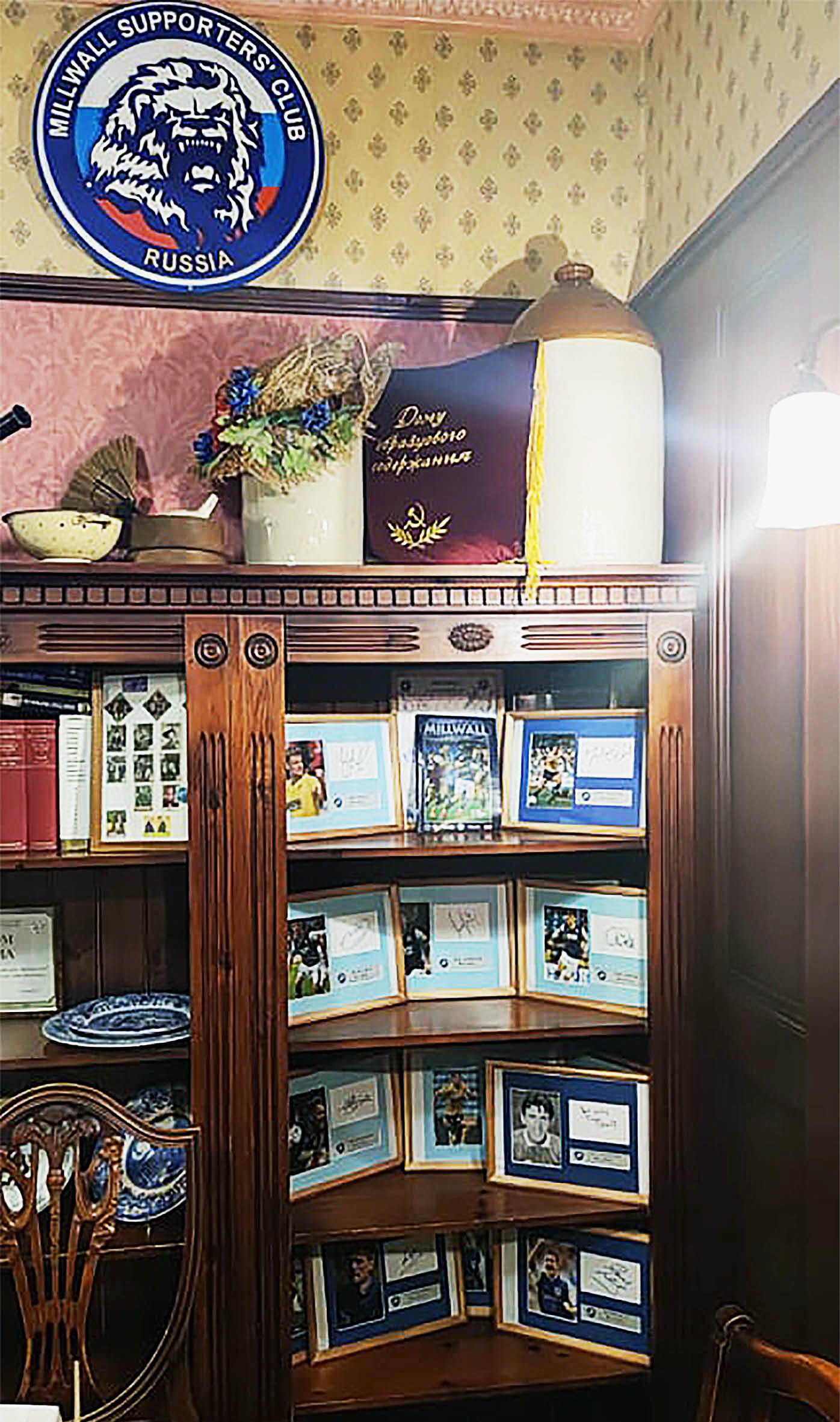 Prokhoroenko said: "The fans are ordinary people, the descendants of dock workers.

"These are people who say and do what they think. It is very closed to outsiders, one  might say a family club, they do not like outsiders.

"But if you got into a family, it will be 100 percent yours there."

The supporters club even run Redbubble a store when you can pick up Russian-themed Millwall merchandise, including face masks which read "F*** Covid-19, I'm Millwall".

Prokhoroenko said The Dockers support across Russia just shows that Millwall is the "biggest small club in the world". 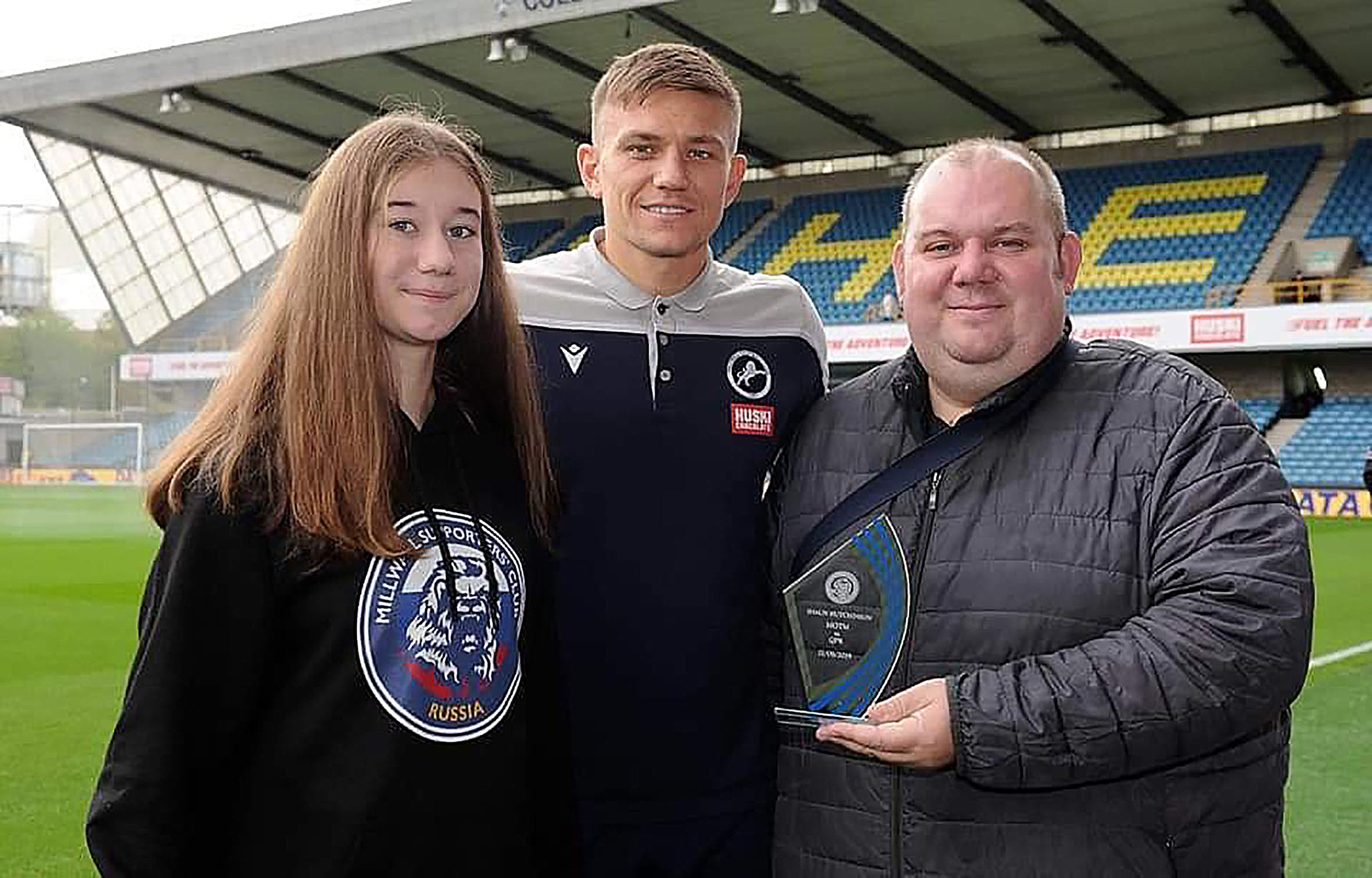 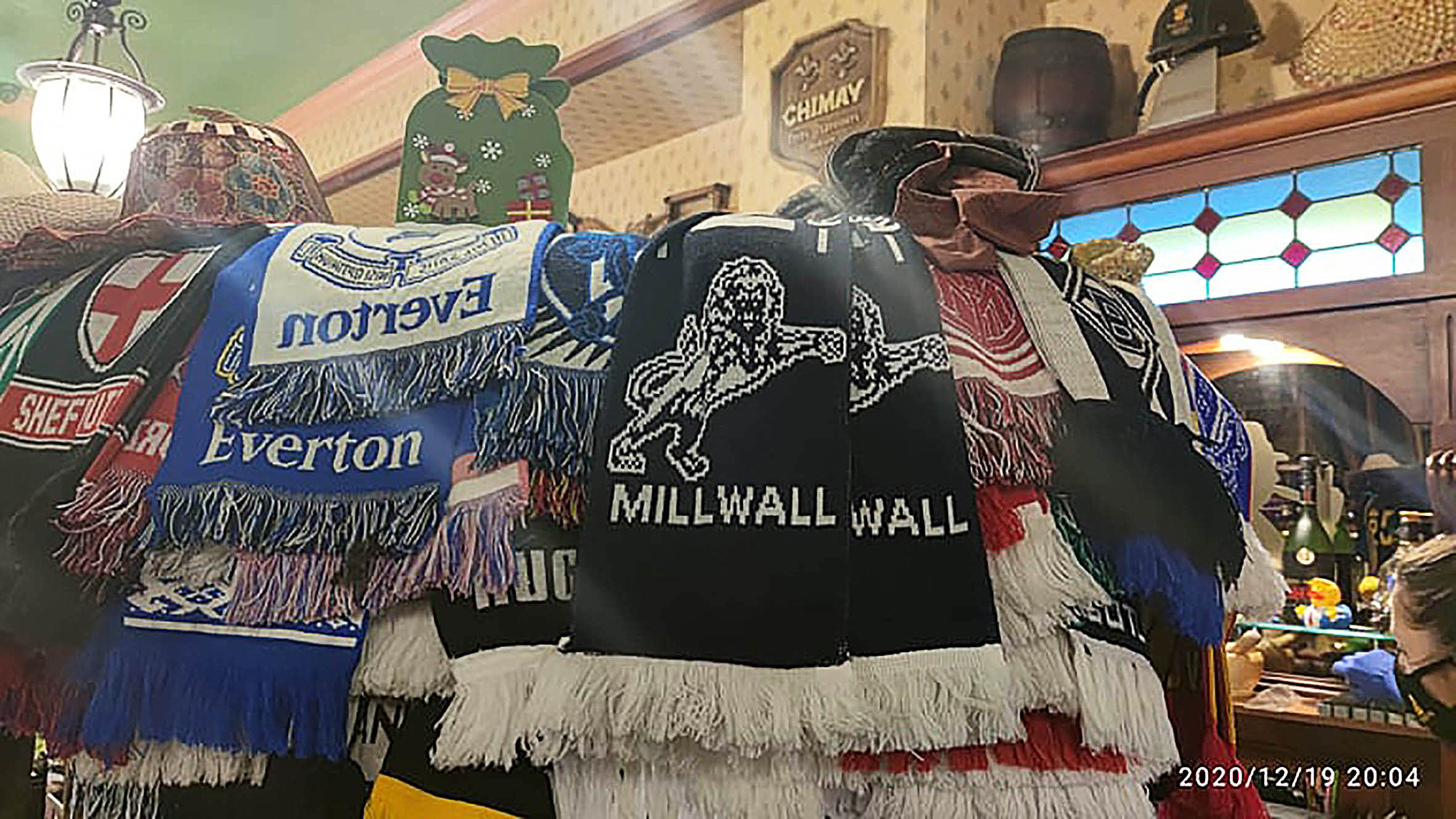 Russian Millwall fan Valery Kozin, 49, told The Sun Online: " I wanted something to talk to my son about and had to to choose football team.

"I started watching everything.

"Accidentally I stumbled upon Millwall. I liked the intransigence on the field, the constant struggle. Selflessness in every moment. I began to support them."

Dmitry Kokorin, 46, from Moscow, another of the Russian Lions, added: "In my opinion, it's all about the origin of the majority of the club's fans.

"This is such a close in spirit, maybe a rough comparison, a clan group of ordinary working guys from the docks of London.

"People are simple, a little simple-minded, but honest and open to their own people. Ready to stand up for themselves and for a friend. Preventing others from being provocative.

"Hence the impression of hooligans among people far from such a life. Although the guys are just friendly and know how to stand up for themselves. When necessary." 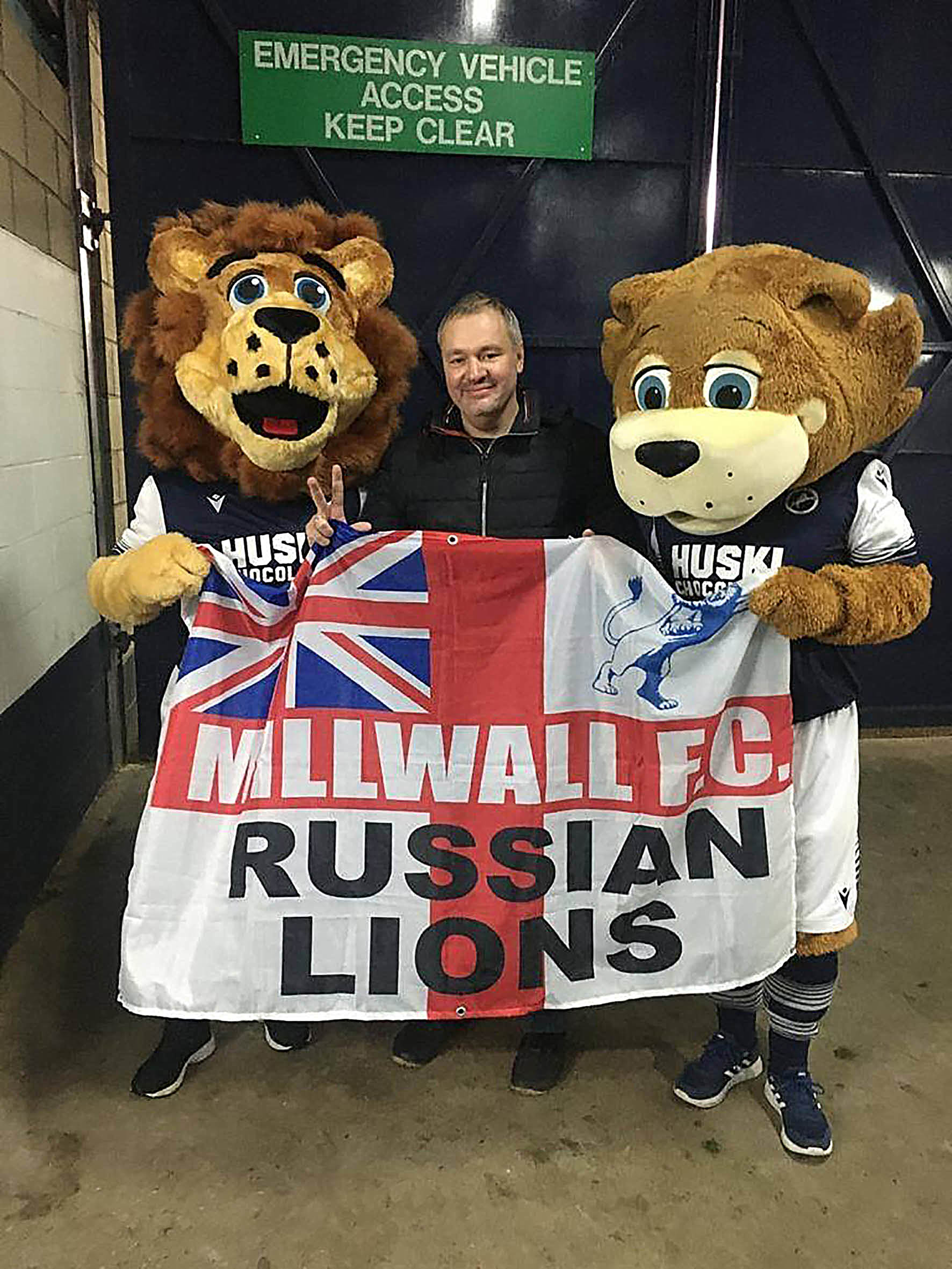 Russia football fans have been under international scrutiny since the 2016 Euros – despite a mostly incident free 2018 World Cup – after gangs of "Ultras" took part in violent riots.

Two thugs who nearly killed an England fan were jailed for a combined total of 13 years earlier this month.

The Russian Millwall fans told The Sun Online they found the sentence harsh and blamed the French police for failing to keep control – but insisted they did not support violence.

Prokhoroenko told The Sun Online: "The fact that a person has suffered is very, very bad.

"But the fact that two people who came to football and took part in an absurd drunken wall-to-wall fight received such long prison sentences is also bad."

Kokorin added: "Fights and riots are not uncommon during mass events, but no one has been punished so severely for this before.

"The fact that a person has suffered is of course very bad. But the guys went to watch football, and not with the aim of crippling someone." 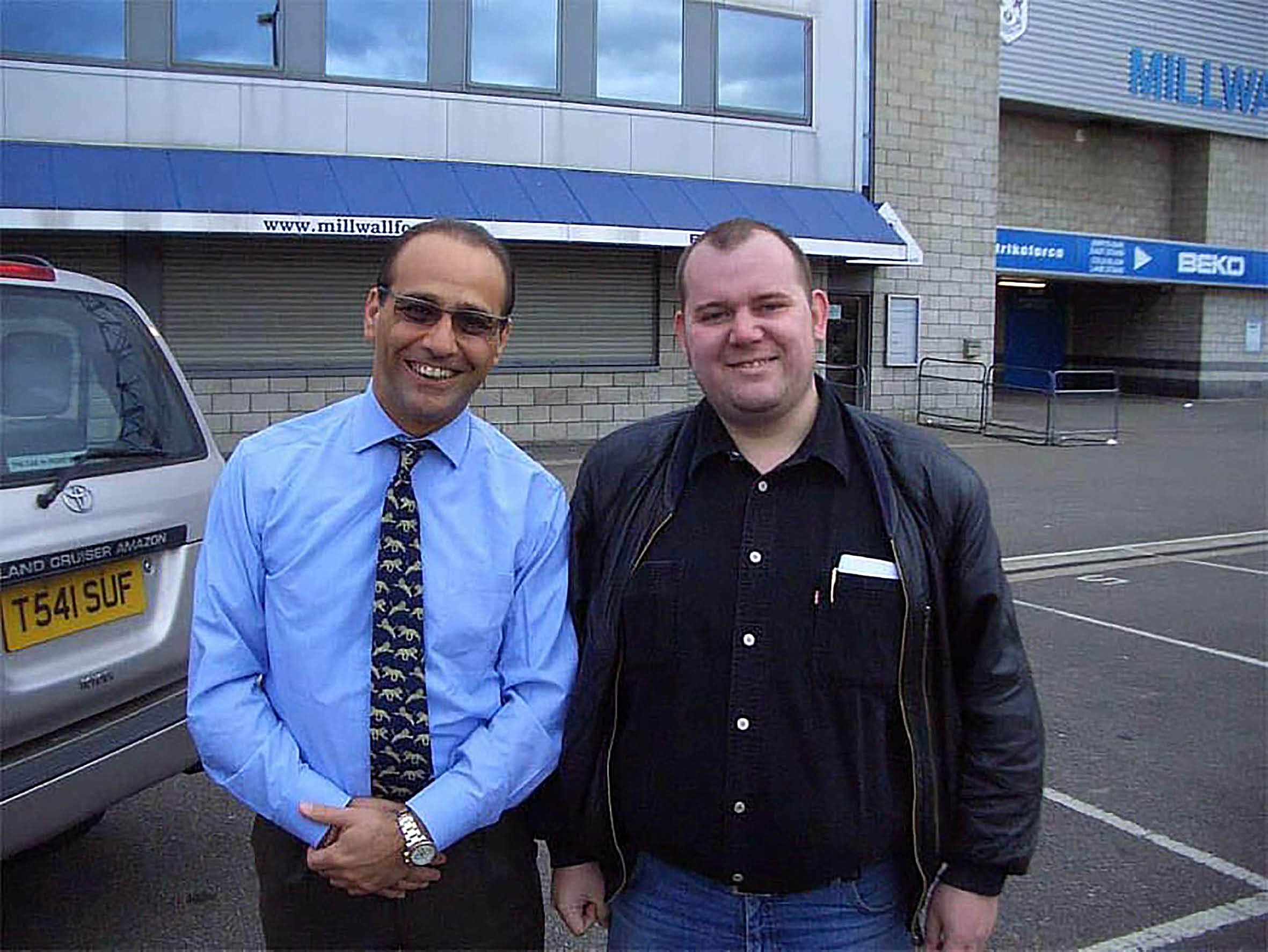 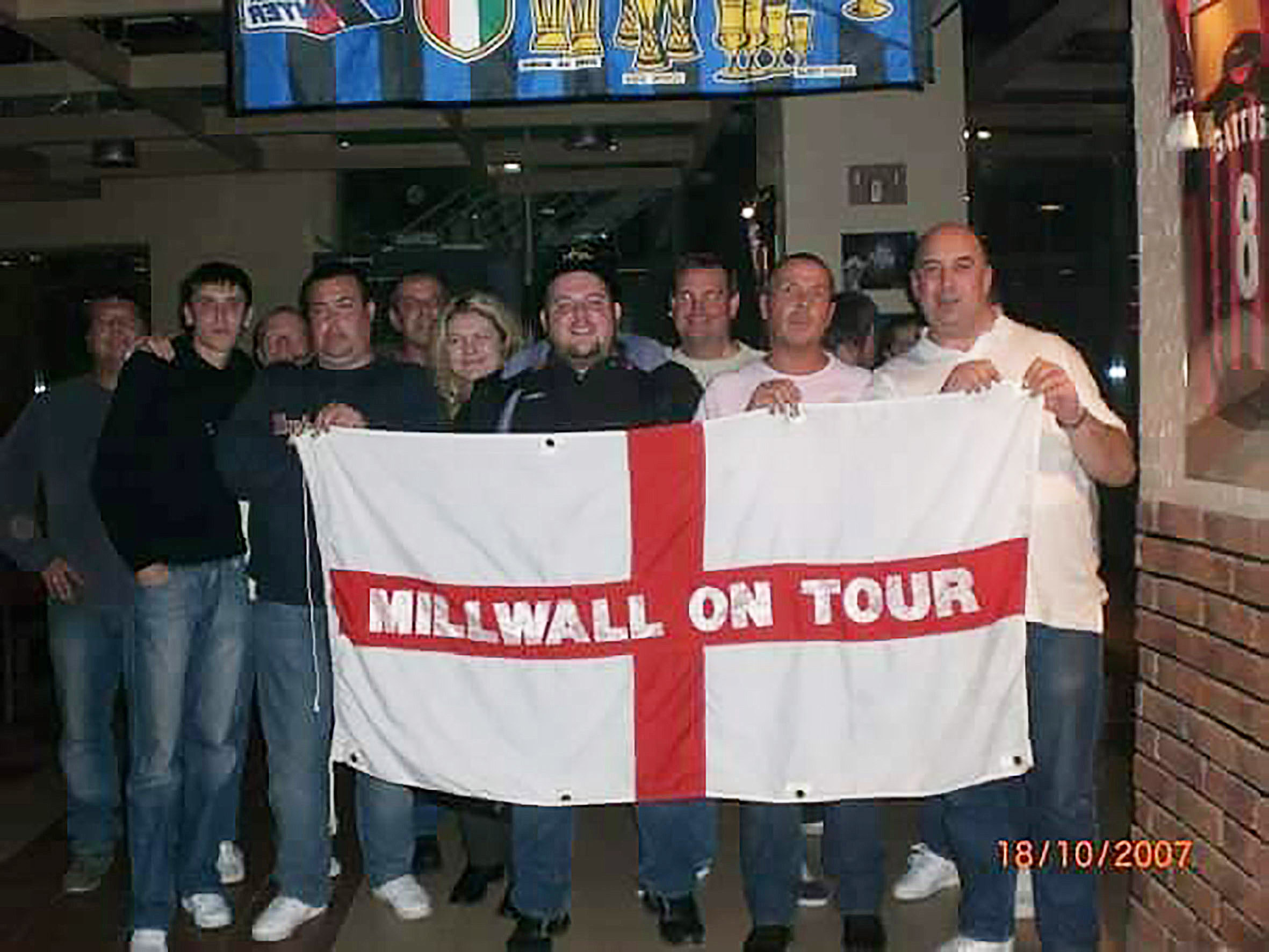 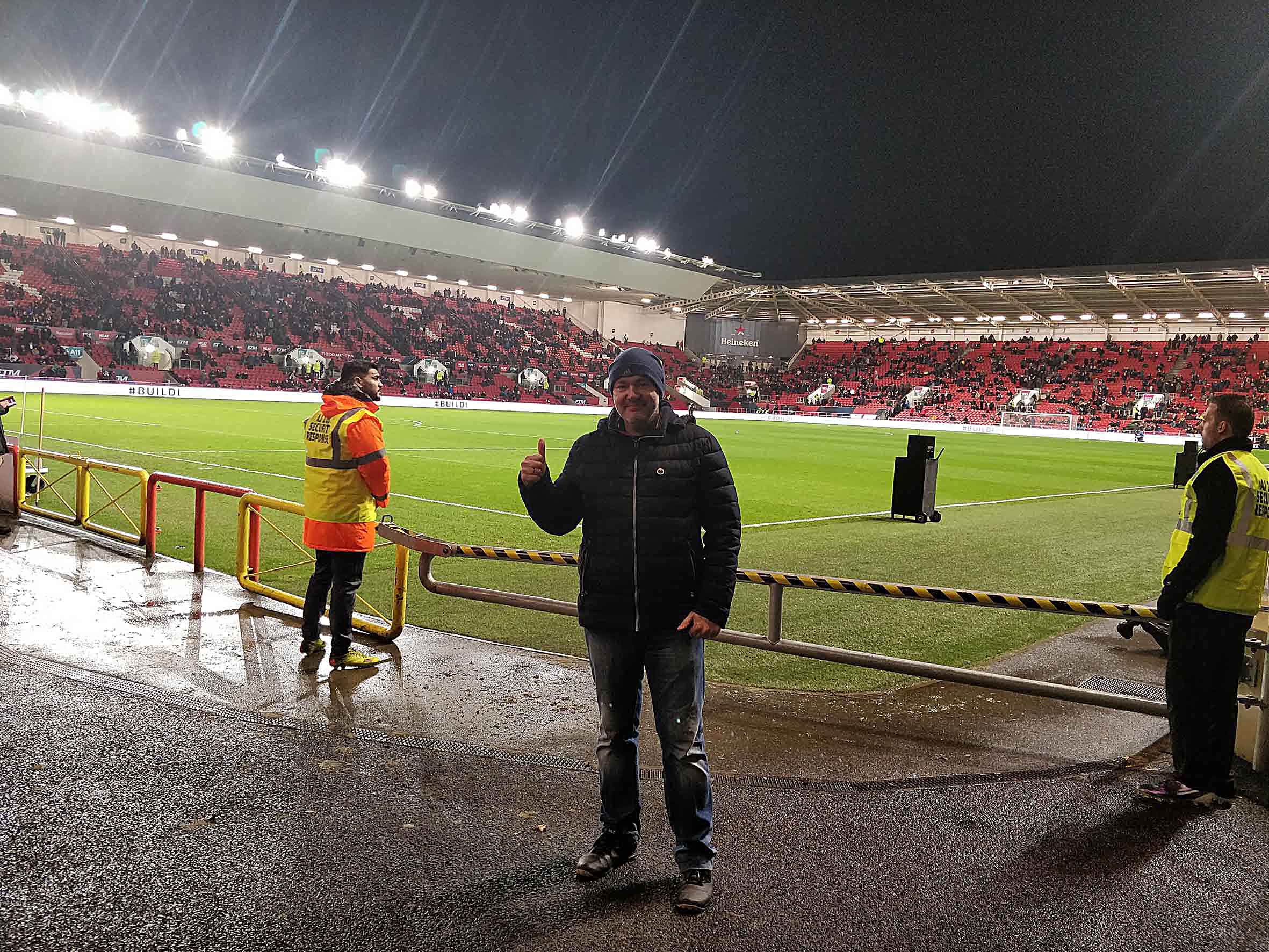 The Russian Lions were also confident that Millwall can find form in the New Year after two of their games were cancelled due to Covid-19.

And they hope to be able to make the 1500 mile journey to The Den in the New Year once the world has returned to some kind of post-pandemic normal.

"Until then, we’re at Churchill's Pub," Kozin told The Sun Online.

Prokhoroenko added: "We really hope that the players will be able to shake things up after the New Year and show us a good game.

"After all, the relegation zone to League One is not far away, but oh, how you don't want to go there."

Meanwhile, Sky Sports was forced to apologise after The Lions were unhappy with the way it covered their clash with QPR.

Millwall complained it was unfair and unbalanced and threatened to ban the broadcaster – which later apologised.

In a statement, it said: "Millwall hopes for a more mutually beneficial relationship with Sky Sports moving forward."

Related posts:
Can YOU find the single four-leaf clover?
Coronavirus UK news – Nurse describes 'unbearable' hospital conditions as Covid cases rise fuelled by mutant strain
Popular News
The best DIY restaurant kits for an intimate Valentine’s Day at home
28/01/2021
Man Utd wonderkid Ramon Calliste, called ‘the next Giggs’, now owns luxury watch business and makes £5m a year – The Sun
26/03/2020
Megan Thee Stallion Addresses Criticism Over Twerking: ‘I Love to Shake My A**’
26/03/2020
Police guard shops to stop coronavirus panic-buyers and enforce social distancing – The Sun
26/03/2020
Coronavirus: Good Morning Britain’s Dr Hilary reveals ‘game-changing’ self-testing kit
26/03/2020
Recent Posts
This website uses cookies to improve your user experience and to provide you with advertisements that are relevant to your interests. By continuing to browse the site you are agreeing to our use of cookies.Ok