A drug prescribed for scabies has been shown to stops the coronavirus in its tracks and may help fight the infection, according to a study.

Ivermectin is used on the NHS and in the US for parasitic infections – but researchers in Australia believe it could be useful against COVID-19.

Tests showed the drug reduced levels of the virus by 99.8 per cent within 48 hours. It had been completely eliminated after three days.

It’s believed the drug works by paralysing the SARS-CoV-2 virus and ‘overwhelming its nervous system’, preventing it from replicating.

Scientists at the Royal Melbourne Hospital believe ivermectin may in turn reduce the severity of the life-threatening disease.

They are now urging for ivermectin to be trialled on coronavirus patients, as experts continue the race against time to find a cure. 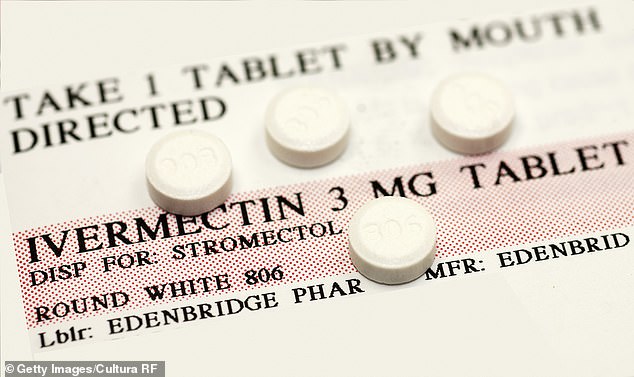 Ivermectin was discovered in the 1970s and has fast become an essential medicine for a vast number of parasitic infections, such as head lice and scabies.

It’s branded as Stromectol, an oral tablet for scabies, or Soolantra, a skin cream for rosacea.

It’s on the World Health Organization’s List of Essential Medicines, the safest and most effective medicines needed in a health system.

In recent years, researchers have shown ivermectin has anti-viral activity against a broad range of viruses.

Most of this research has only been ‘in vitro’ – cells in the laboratory – which has prompted calls for human trials.

An experimental drugs holds promise against the coronavirus after showing it effectively blocks the ‘cellular door’ SARS-CoV-2 uses to infect its hosts.

An international team led by University of British Columbia researcher Dr Josef Penninger have been working to understand the pathology of the virus for weeks.

ACE2, a protein found on the surface of cells in living organisms, has been identified as a key receptor for SARS, the viral respiratory illness recognised as a global threat in the early 2000s.

‘The virus causing COVID-19 is a close sibling to the first SARS virus,’ Dr Penninger said.

‘Our previous work has helped to rapidly identify ACE2 as the entry gate for SARS-CoV-2, which explains a lot about the disease.’

It essentially stops the infection from replicating at an early stage by ‘catching’ the virus, and blocking its pathway to ACE2 on the host’s cells.

Dr Penninger said APNO1 could be ‘a very rational therapy that specifically targets the gate the virus must take to infect us’.

‘There is hope for this horrible pandemic,’ he said.

Professor Francois Balloux of University College, London, tweeted: ‘Soluble ACE2 proteins (ACE2 being the receptor human cells).. binds to the ACE2s in solution rather than the host cells. In vitro results look promising.’

APN01 is soon to be tested in clinical trials by the European biotech company Apeiron Biologics as a potential antiviral therapy for COVID-19, the team said.

The study also looked at how the virus can infect blood vessels and kidneys using organoids – small, engineered mini organs that replicate the real thing.

The virus can directly infect and duplicate itself in these tissues, according to the study, which is important information considering the fact that severe cases of COVID-19 present with multi-organ failure.

The findings were published in the journal Cell on April 2.

That’s based on the fact that SARS, a coronavirus closely related to the new one, has a weak link in its DNA which the team said could be a potential target for ivermectin.

Cells were infected with SARS-CoV-2, the scientific name designated to the novel coronavirus, for two hours.

Then ivermectin was injected. After 24 hours, there was a 93 per cent reduction of virus DNA in the cells compared to cells which were not treated with ivermectin.

Results showed ‘the loss of essentially all viral material by 48 hours’, Dr Leon Caly and colleagues wrote in their paper.

They add: ‘These results demonstrate that ivermectin has antiviral action against the SARS-CoV-2 clinical isolate in vitro, with a single dose able to control viral replication within 24-48 h in our system.

‘Ultimately, development of an effective anti-viral for SARS-CoV-2, if given to patients early in infection, could help to limit the viral load, prevent severe disease progression and limit person-person transmission.

‘This brief report raises the possibility that ivermectin could be a useful antiviral to limit SARS-CoV-2.’

The team suggested that until a drug is proven to be beneficial against COVID-19 in a clinical setting – which has not happened yet – ‘all should be pursued as rapidly as possible’.

They noted that ivermectin has already been proven to be safe for use – it is approved by the FDA and MHRA.

Dr Michael Head, a research fellow at University of Southampton with a speciality in scabies and other diseases, said ivermectin is one of the best treatments for scabies.

It works by paralysing the parasite and ‘overwhelming’ its nervous system.

How it works to fight off the coronavirus is not clear yet, but it likely inhibits the viruses replicating mechanism in some way.

Dr Head said: ‘Ivermectin is a widely used medicine, often used to treat many infections such as scabies.

‘There is a huge amount of research ongoing looking at whether we can repurpose existing drugs as anti-virals to treat COVID-19 cases.

‘This new interesting study show Ivermectin has shown some effectiveness against the novel coronavirus in the laboratory setting.

‘However, there is a huge difference between laboratory studies, and safety and effectiveness in patients, and so we should be cautious about reading too much into these preliminary results.

‘It is likely most of the existing medicines being tested already will not end up being useful for treating patients against COVID-19.’

Remdesivir, chloroquine and favipiravir are just some of the drugs being investigated in a bid to find a cure to the killer coronavirus.