Matt Hancock was confronted this morning by the son of a doctor who had warned the government about a lack of PPE for NHS staff before he died of coronavirus.

Mr Chowdhury urged Mr Hancock to apologise and to ‘openly acknowledge there have been mistakes in handling this virus’.

Mr Hancock insisted the government ‘took very, very seriously what your father said’ and ministers have been ‘working round the clock’ to make sure frontline staff have the right kit to keep them safe. 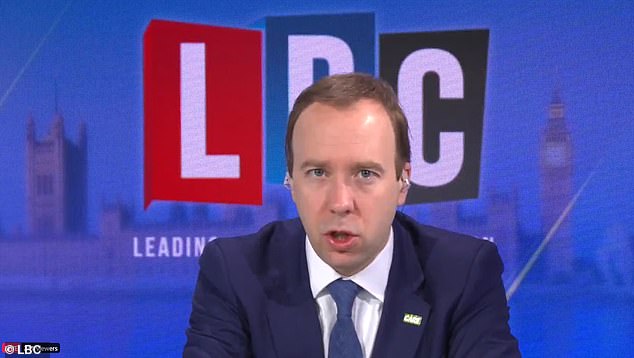 Matt Hancock, pictured during an appearance on LBC this morning, was confronted by the son of a doctor who warned of a lack of PPE for NHS staff before he died of coronavirus 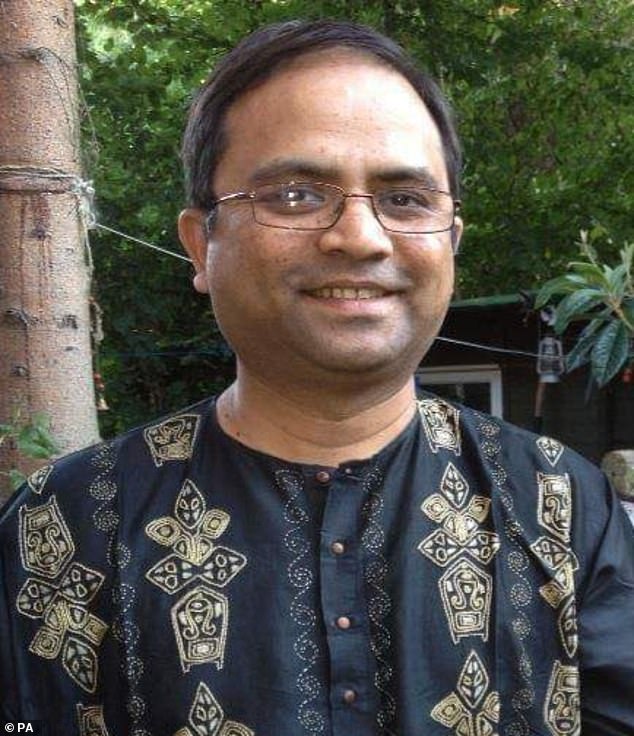 Mr Hancock was appearing on an LBC Radio phone-in and had begun to take questions from members of the public when Mr Chowdhury challenged him.

Mr Chowdhury asked Mr Hancock: ‘When he was unwell he wrote an open letter to the Prime Minister appealing for more PPE for NHS frontline workers, it was a request that was ignored, two weeks later he passed away and since then over 100 NHS and social care workers have passed away from contracting the virus.

The Health Secretary replied: ‘Intisar, I’m really sorry about your dad’s death and I have seen the comments you’ve made and what you’ve said in public and I think it’s very brave of you to be speaking out in public.

‘We took very very seriously what your father said and we’ve been working around the clock to ensure that there’s enough protective equipment and in the case of anybody who works in the NHS or in social care and has died from coronavirus we look into it in each case to find out the reasons where they might have caught it and what lessons we can learn.’

Mr Chowdhury said the nation is ‘not expecting the government to handle this perfectly’.

He continued: ‘We just want you to openly acknowledge there have been mistakes in handling this virus.

‘Openly acknowledging a mistake is not an admission of guilt, it is genuinely just making you seem more human. So can you please do that for me at the press conference today – make the public apology?’

Mr Hancock did not apologise but said it is ‘very important that we are constantly learning about how to do things better’.

The issue of PPE supply has emerged as one of the dominant issues during the coronavirus crisis.

The government has faced repeated accusations of not doing enough to increase the supply of the equipment.

But ministers have insisted they are doing all they can to source the kit from around the world as many other countries try to do the same.

Health bosses have previously said there have not been national shortages but they have conceded there have been local pressures with some hospitals and care homes temporarily running out of certain items.

There have been numerous reports of some frontline workers re-using single use PPE because they do not have replacements.

Mr Hancock said this morning the government has now distributed more than a billion pieces of PPE during the current outbreak.

Speaking to Nick Ferrari on LBC, he said: ‘People need to have the PPE according to the guidelines, the guidelines do say that in some cases PPE can safely be reused and that’s a good thing because PPE is in global short supply.’

When asked if he would wear re-used PPE that was originally designed as single-use on future visits to hospitals, Mr Hancock said: ‘If that is what is clinically advised, then yes of course.

‘What we’ve managed to do during this crisis is improve ways that kit like that can be sterilised and then safely reused and that’s work that has been ongoing.’