Police are yet to determine what caused a light aircraft to crash, killing an experienced 52-year-old recreational pilot in Victoria’s south-east on Sunday morning.

Police say the Burwood man took off from a recreational airfield along Koo Wee Rup Road in Koo Wee Rup, 63 kilometres south-east of the Melbourne CBD, about 6.45am. 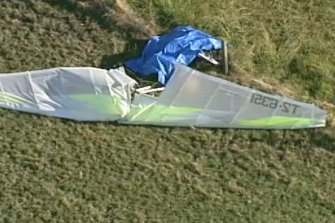 An aerial view of the scene where a man died during an aircraft crash in Koo Wee Rup on Sunday.Credit:Nine News

Acting Inspector Glen Finlay said the “ultralight glider” was airborne for a short period before “technical difficulties” caused the plane to crash about 6.50am.

The man died at the scene and was the sole occupant of the aircraft.

The fatal crash was called in to emergency services by a bystander witness who was not a family member, according to acting Inspector Finlay.

Investigations will continue into the cause of the crash.

“[The pilot was] by all accounts an experienced pilot [who] does have the necessary qualifications and the experience to be flying today,” acting Inspector Finlay said.

It is not yet known if the 52-year-old man owned the plane, and police on Sunday morning had not yet established who the aircraft was registered to.

“The Sporting Aviation Federation of Australia is the actual oversight body for this, given it is a recreational aircraft. So police will be preparing a report for the coroner with oversight from that body,” Inspector Finlay said.

“Obviously, thoughts go out to the families and the loved ones of the deceased person and also the people that potentially have witnessed that today. Not forgetting it’s this time of year – Easter – so people are spending time with their families.“

The man’s death comes after at least two other fatal accidents on Victoria’s roads across the long weekend.

On Saturday morning a man died after crashing into a tree in Annuello, in the state’s north- east just before 7am.

Police believe the driver of a ute, travelling west along the Annuello-Wemen Road, lost control before crashing.

Another man died later on Saturday after a car rolled in Whoorel, 140km south-west of Melbourne on Saturday afternoon. Two others, a woman and a young boy, suffered non-life-threatening injuries but the driver died at the scene.

Police on Saturday said they had been “left shocked” by the number of people caught driving dangerously during a five-day policing blitz on the state’s roads.

One of a number of incidents cited was a 15-year-old boy found driving a car at 7.30pm on Friday who returned a blood-alcohol reading of .104.

Police impounded the vehicle and the Hoppers Crossing teen is expected to be charged on summons with drink driving, unlicensed driving and other traffic offences.

In another incident, a Dandenong man was caught doing 140km/h in an 80km/h zone along the Monash Freeway in Glen Iris on Saturday morning.

“When asked why he was in such a hurry, he advised he was running late to drop his wife at work,” a police spokesperson said.