A hotel in Majorca has become the first on the holiday island to close after an outbreak of coroanvirus saw ten staff fall sick.

The Club Cala Barca is not accepting any new bookings and will shut its doors for disinfection on Sunday when the last of the current guests leave. New arrivals will have to check in at a different hotel, 40 miles away.

The outbreak was first detected last week when a worker fell ill, and 192 more tests uncovered another nine infections among staff and four more among their relatives.

Bosses say no guests are showing symptoms and they do not have any plans to test visitors, since all staff are required to socially distance. 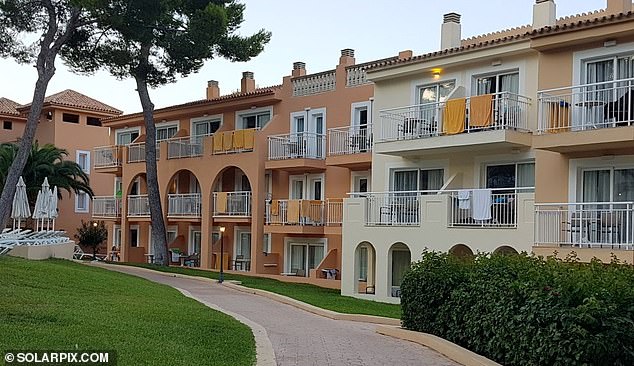 The Club Cala Barca hotel, in Mallorca, has been forced to close after an outbreak of the virus saw 10 staff infected along with four of their relatives

It comes as Spain announced 8,500 new coronavirus cases across the country at the weekend – its largest jump in three months – bringing its total to 297,054.

Many European countries are starting to see an uptick in cases after reopening key sectors of the economy following near-total lockdowns that lasted for two months.

Spain is the worst-hit, with many of its neighbours including Italy, Germany and the UK, recommending against travelling there.

Elsewhere in Spain, two towns are back in lockdown after a coronavirus outbreak at a poultry farm left 49 workers infected.

Around 10,000 people living in Iscar and Pedrajas, 80 miles north of Madrid, were told to remain in their homes for all-but essential business, starting this week.

Extra police and a helicopter have been drafted in to stop people leaving their homes for non-essential business.

Rule-breakers will face on-the-spot fines as mayors of both towns accused people of not taking advice seriously, including failing to wear masks and socially distance.

The outbreak started after a worker at a local slaughterhouse fell ill and was tested positive. 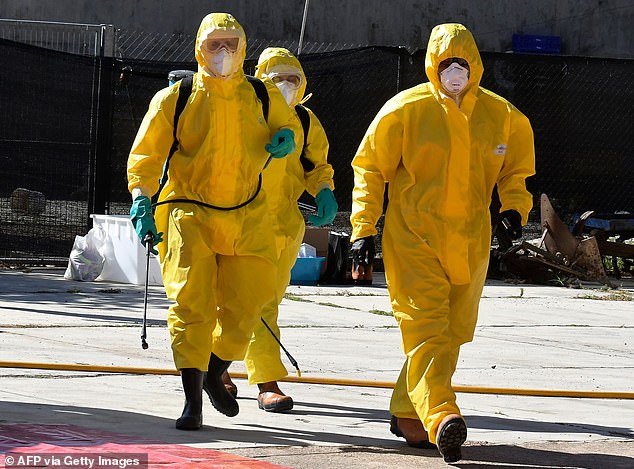 Trackers traced numerous contacts, including other workers who had travelled in the same car, family members and friends and other people with whom they had mixed.

So far, 22 of the 49 positives work at the slaughterhouse.

Meanwhile in Lleida, 80 miles west of Barcelona, a business has been forcibly closed after inspectors discovered 19 staff were still working despite having the virus.

Owners of the business had initially refused to comply with regulations meaning staff had to be tested.

They eventually agreed, but insisted that only staff who volunteered for the tests should have them. Ninety people took the tests, and 38 tested positive.

When inspectors returned for a follow-up six days later, they found that 19 people were still at work, despite the positive test result.

Officials did not name the affected business, or say what work the staff were doing. 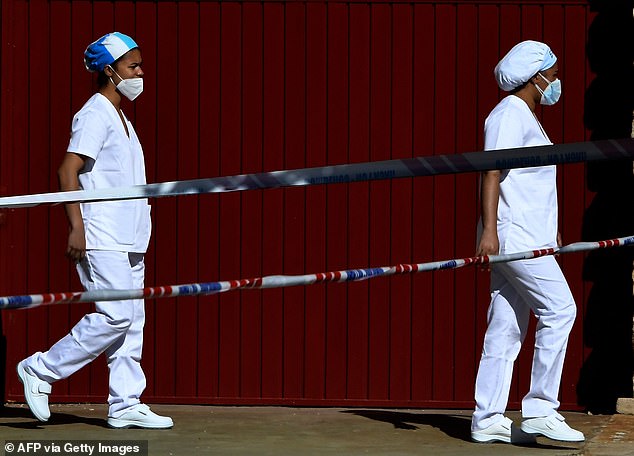 In Lleida, a company was forced to shut down after it allowed 19 of its staff to go on working despite knowing they had tested positive for coronavirus (file image)

The tallies, using data collected by AFP from national authorities and information from the World Health Organization (WHO), probably reflect only a fraction of the actual number of infections.

Many countries are testing only symptomatic or the most serious cases.

Based on latest reports, the countries with the most new deaths were India with 803 new deaths, followed by Brazil with 561 and the United States with 532.