An incident involving a regional train and two vehicles in Melbourne’s outer west is causing major delays as replacement buses are brought into service on the Ballarat line.

The collision occurred at Hopkins Road in Truganina between Rockbank and Caroline Springs around 11.30am on Monday. 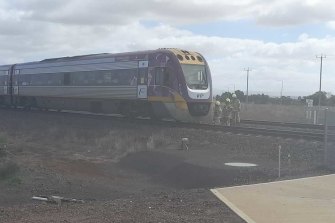 Emergency services inspect a train that was involved in the collision near Rockbank on Monday morning.Credit:Nine

A Fire Rescue Victoria spokesman said crews responded to multiple triple zero calls reporting a collision between a truck and a passenger train at a level crossing.

“Firefighters arrived to find three motor vehicles involved in the collision and quickly worked to make the scene safe,” he said.

Paramedics assessed 10 people at the scene and took a woman, who was not in a critical condition, to the Alfred hospital.

Coaches are replacing trains between Wendouree and Southern Cross in both directions.

V/Line said replacement coaches would travel between Wendouree and Sunshine, and then passengers would travel via metropolitan services between Sunshine and Southern Cross.

Victoria Police is at the scene and WorkSafe has been notified.

Motorists have been asked to avoid the area, with Leakes Road and Greigs Road, or Boundary Road providing alternative routes.