A local pastor has been killed and two others have been injured after a shooting at Starrville Methodist Church in East Texas, according to the Smith County Sheriff's Office.

Smith County Sheriff Larry Smith said during a news conference that the confrontation occurred around 9:30 a.m. Sunday after the suspect was discovered inside the church's bathroom with a red bank bag. 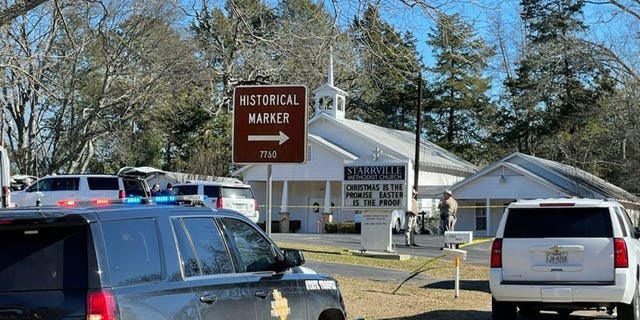 The Smith County Sheriff’s Office investigates a fatal shooting incident at the Starville Methodist Church in Winona, Texas, on Sunday morning, Jan. 3, 2021. A suspect who fled has been arrested, said the sheriff’s office. (Zak Wellerman/Tyler Morning Telegraph via AP)

Smith said that the pastor, who was armed, pointed a gun at the suspect and asked him to leave. However, the suspect was able to disarm the pastor before shooting and killing him.

There were two other individuals inside the church during the incident. One individual is being treated at a local hospital due to a fall while the other victim is undergoing surgery for a gunshot wound. The second victim's condition is currently unkown.

After fleeing the scene in the pastor's car, the suspect was taken into custody by authorities in Harrison County. Smith said the suspect had suffered a gunshot wound through his hand, though it's unclear when he was shot.

Smith declined to identify the pastor, the other people injured or the suspect.

Prior to the incident, authorities were pursuing the suspect in an overnight manhunt that began at 7:30 p.m. Saturday night. The suspect was driving a dark Volkswagen Beetle before abandoning the car and hiding in the woods. It is unclear when the suspect may have entered the church and Smith declined to say why authorities had been searching for the man.

The sheriff explained that there is currently no reason to believe that the incident was politically or religiously motivated in any way.

"The church just happened to be the location that he was able to get into at the time," Smith said.

Texas Gov. Greg Abbott issued his condolences in a statement Sunday following reports of the incident.

"Our hearts are with the victims and the families of those killed or injured in this terrible tragedy," Abbott said. "I am grateful for the law enforcement officers who apprehended the suspect, and I ask Texans to join Cecilia and me in praying for those affected by this horrific shooting. The State of Texas is working closely with first responders and local officials to ensure that justice is served and that the Starrville community has the resources it needs during this time."

The sheriff said the shooting suspect will likely face a capital murder charge.

Related posts:
Naturists blast police for arresting elderly naked man
Inside huge mansion the Nelson family-of-18 live in with three floors, a piano, home gym and an enormous dining table
Popular News
Dior Men’s Fall 2021
22/01/2021
Man Utd wonderkid Ramon Calliste, called ‘the next Giggs’, now owns luxury watch business and makes £5m a year – The Sun
26/03/2020
Megan Thee Stallion Addresses Criticism Over Twerking: ‘I Love to Shake My A**’
26/03/2020
Police guard shops to stop coronavirus panic-buyers and enforce social distancing – The Sun
26/03/2020
Coronavirus: Good Morning Britain’s Dr Hilary reveals ‘game-changing’ self-testing kit
26/03/2020
Recent Posts
This website uses cookies to improve your user experience and to provide you with advertisements that are relevant to your interests. By continuing to browse the site you are agreeing to our use of cookies.Ok