THE stepmother of Gannon Stauch searched Google for a new career, a new apartment and even a new husband in the days before his murder.

Letecia Stauch was particularly interested in looking at properties in Florida, specifically in the city of Pensacola where Gannon's remains were ultimately found last month. 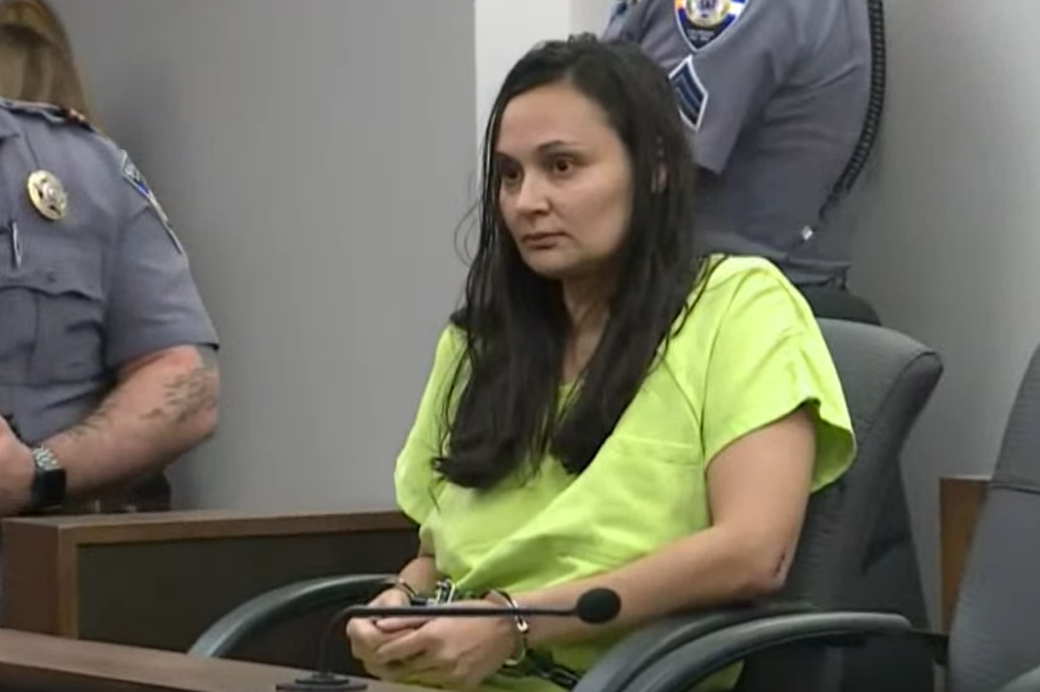 In the affidavit, obtained by The Sun, police note that on January 27 at 6:55 p.m., Letecia called 911 to report that Gannon had not returned home after going to a friend’s house.

Gannon was listed as a runaway AFTER his stepmother said she had seen him just a few hours prior and told p;olice that the boy often played with children in the neighborhood.

Police now believe that this call was placed a few hours after Letecia bludgeoned her stepson in his bedroom and then cleaned up the crime scene.

Letecia seemed to resent her job as the caretaker to Gannon and his sister as well as their father's long absences.

She Googled "I’m over doing all the work for my step kids and their mom doesn’t help” and “one day people will wish they treated you differently” just two days before the alleged murder.

Letecia got even more specific in subsequent searches, which included: "I wonder if my husband's ex-wife is sending me a Valentine's Day card since I raise her kids"; "It's crappy some parents don't care for their kids or buy them presents"; and "Parenting should be four people not one."

It is unclear what the state of Letecia's relationship with her husband Al was like at the time of the murder, but Letecia appeared to have moved on judging by her searches for "Find real military singles" and "Find me a rich guy who wants me to take care of his kids."

Letecia also reached out to fakepolygraph.com at one point during the investigation, after telling her husband and police an assorted array of stories about what happened the day Gannon went missing.

She never got her results but did submit the list of questions she wanted to include and the answer she planned to give.

One of then questions was "Did you participate in any way in causing harm to your stepson?" 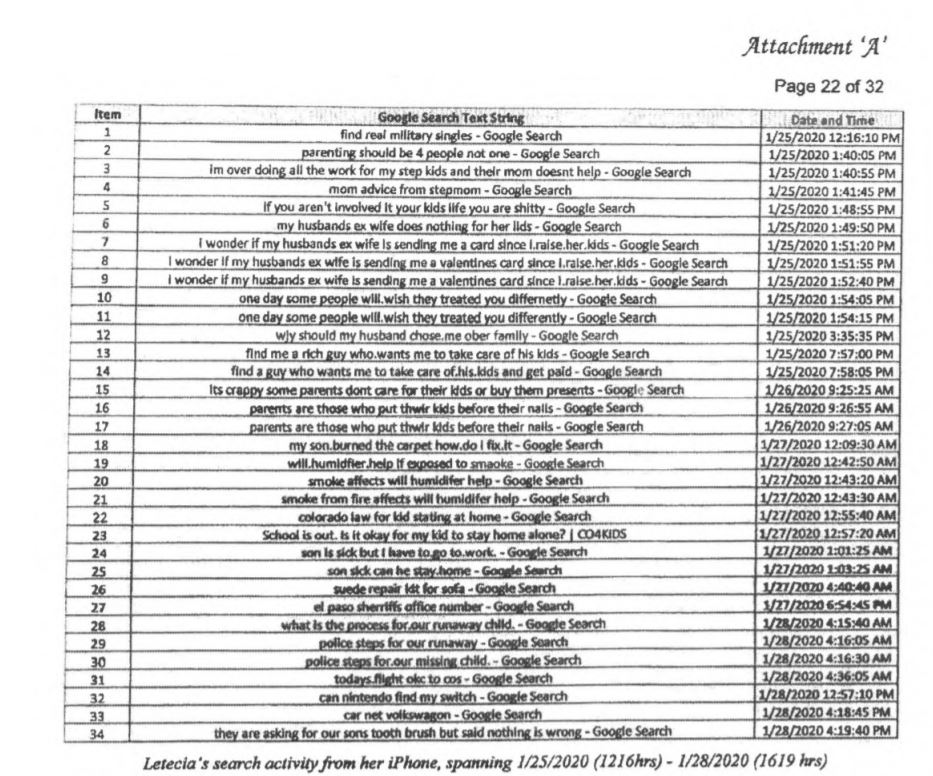 Two days after she first reported Gannon missing, Letecia had a much different story for authorities, this one involving a mystery man and details of sexual violence she had not mentioned in previous interviews.

On that day Letecia was interviewed at the El Paso County Sheriff's Office, arriving two hours after she was scheduled to meet with deputies according to the affidavit.

In that interview, Letecia claimed that, the day before Gannon went missing, she had met a Hispanic man named Eguardo while driving around the neighborhood.

He was working at a nearby construction site Letecia told authorities, and she asked him to help her take car of a rug that Gannon had allegedly ruined with candle wax.

Letecia next saw Eguardo the following day she told police, when she walked into her home and found him inside with a gun drawn.

Eguardo held her in the basement at gunpoint for a few minutes claimed Letecia, then let her go greet her stepdaughter when she came home from school.

She did not reveal why he let her leave the basement of the home and go upstairs without following her, or why she didn't run for help or call 911 once she had broken free of the armed intruder.

When she returned, Eguardo "vaginally penetrated her against her will," said Letecia.

"During this period, she believed she that she had hit her head and may have blacked out," states the affidavit.

"Investigators noted no injuries on Letecia's head during their contact with her."

It was during this attack that Letecia claims Gannon "jumped on Eguardo's back and Eguardo was able to throw him Gannon off his back and across the room."

Eguardo then demanded Letecia give him a suitcase she said while "he had the gun held to Gannon."

Letecia told deputies she gave him a suitcase and a cardboard box, at which point he "attempted to sexually assault her again,but she hit her head and blacked out again." 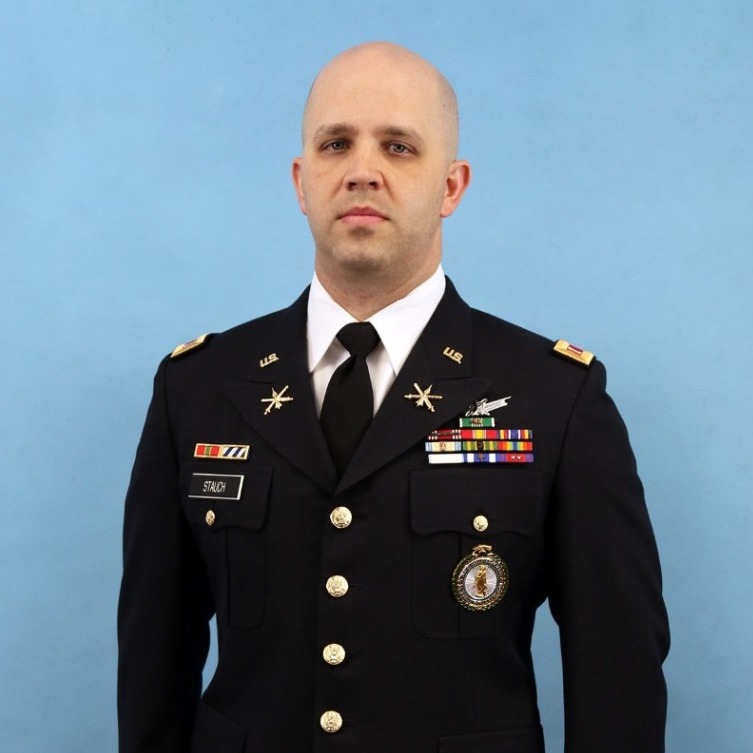 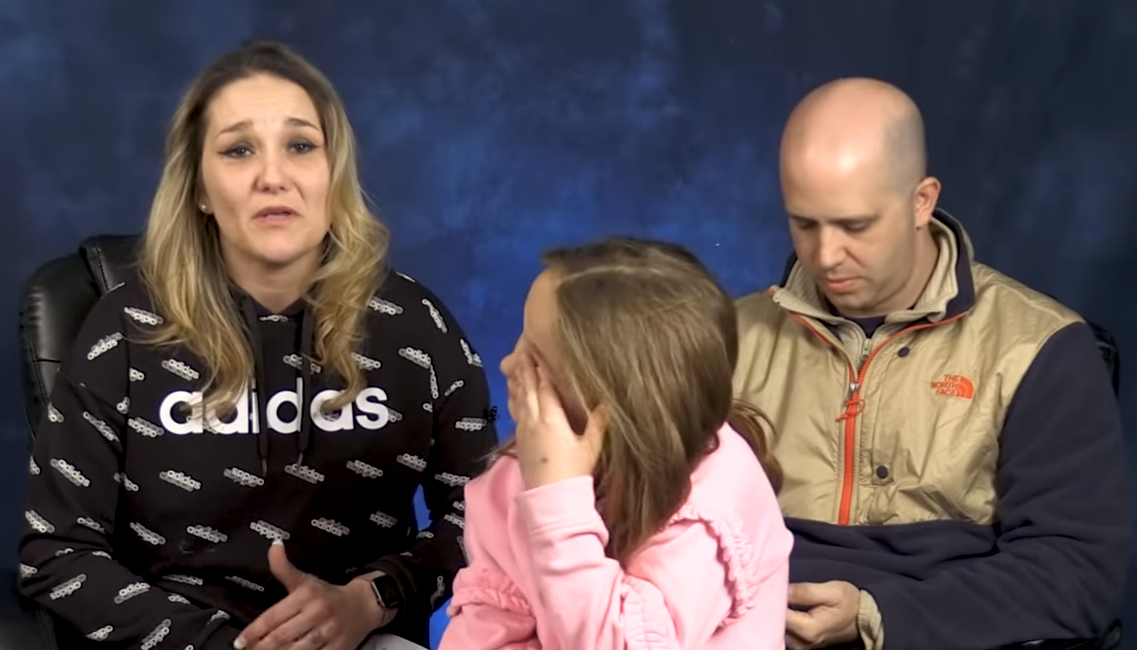 Letecia then straightened up the scene of her rape and Gannon's abduction , waiting hours to notify authorities according to the affidavit.

At the end of her interview, Letecia told deputies she was feeling ill, but declined to have a rape kit conducted at the hospital.

Once at the hospital she sneaked out of the facility according to the affidavit and was whisked away by an unknown person.

She was later seen meeting up with her daughter Harley.

Authorities now believe that Letecia murdered Gannon shortly after 2pm on January 27, according to the affidavit.

It was a violent crime according to the affidavit, and there was “blood spatter on the walls and enough blood loss to stain his mattress, soak through the carpet, the carpet pad and stain the concrete below his bed.”

The affidavit states that she then ordered Gannon’s younger sister Laina to play outside when she returned from school a short time later.

When Letecia’s own daughter returned home that day, she sent her to the Dollar Store according to the affidavit.

Once there, Leticia texted her daughter Harley asking for “carpet cleaner, trash bags and baking soda.”

Letecia reported Gannon missing soon after, but "her story dramatically changed multiple times over the following days” states the affidavit.

“Letecia lied to investigators on multiple occasions, has unexplained abnormal behavior such as obtaining a rental car, disconnecting her cell phone from the cellular network, the false reporting of an alleged rape, abnormal patterns of travel, a continuously evolving story with material changes in facts and circumstances and has since left the state of Colorado,” states the affidavit.

According to the affidavit, police believe that Letecia disposed of the body on the side of a nearby highway, but there are no details as to how Gannon’s body got from there to Florida.

She has pled not guilty to all charges and is behind bars in a Colorado jail ahead of her next court appearance in June.

She is also due in court around that time for a divorce hearing.