Less than three years after fleeing terror, Abdul is dux of Dandenong

An ATAR of 97.15 is a stellar result for any VCE student, ranking them in the top 3 per cent in the state.

For Abdul Basit, a Pakistani Hazara who arrived in Australia as a refugee 2½ years ago, it is doubly extraordinary.

“I was flabbergasted, I’m not going to lie,” he said.

“I wasn't expecting a score near that, but I really did give my best and I’m really happy about it.” 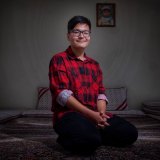 In May 2018 his family fled Quetta, his strife-torn city of birth near the Afghan border.

"It was pretty harsh there, there were acts of terrorism every month so it was dangerous; my father thought, this isn't what I had planned for my kids," he said.

They landed in Sydney and by August Abdul, his mother and brothers had joined their father in Melbourne’s south-east and he had enrolled at Dandenong High, one of the city’s most diverse and disadvantaged schools.

Abdul's school in Quetta taught many of its subjects in English, but adapting to a Western education still presented challenges, including a language barrier.

But in many ways Abdul fitted straight in: roughly one in four students at the large government school is an asylum seeker or refugee, while 91 per cent of its 1600 students have a non-English-speaking background, speaking more than 70 languages.

Abdul was struck by the ethnic diversity of his new school.

“I never really noticed that I was in an Australian school because there were so many students from different cultural backgrounds,” he said.

“The vibe” at Dandenong, as Abdul put it, was supportive and welcoming. During lockdown, teachers and students did what they could to help each other.

"It's a great school; they really helped me financially and mentally," he said.

The school had a rough run in 2020, including a three-week shutdown early in Melbourne’s second wave, when staff and several VCE students were infected with COVID-19.

Dandenong High School principal Susan Ogden said the spread of the virus through the school community and the shift to online learning created anxiety among VCE students, who worried about when they would be able to return to classes. 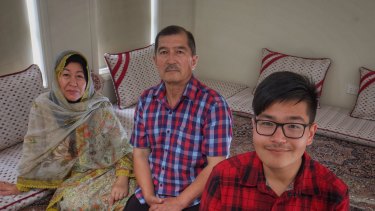 Dandenong High School dux Abdul Basit at home in Doveton with his parents, Jamila and Sajjad Ahmad. The family emigrated from Pakistan as refugees in 2018.Credit:Luis Ascui

Many could not get to their school lockers to access study materials during the shutdown and lost weeks of learning time.

Many also live in small homes with large families and struggled to find a quiet working space.

But they were also resilient and eager to stay connected with the school, which provided laptops and internet dongles to about 600 students, Ms Ogden said.

“Overall our students have been remarkable; their attendance online and then when we returned has been the best it’s been for years,” she said.

Throughout lockdown, Abdul put his head down inside his family home in Doveton and focused on his studies in specialist maths, physics, chemistry, geography and English as an additional language. Scores of 45 in physics and 43 in specialist maths earned him two mentions on the VCE honour roll.

He is determined to make the most of his chances in Australia.

“It’s just a positive vibe here, everyone keeps on encouraging you to do better,” he said.

“Everyone is given their rights, no one is discriminated against or discouraged from what they want to do."

He hopes to study a bachelor of science at university, majoring in physics, but will need a scholarship. His permanent resident visa prohibits him taking out a HECS loan.

Related posts:
Peter Kay addresses ‘embarrassing’ backstage moment with Mamma Mia! star ‘I was mortified’
The Masked Singer panel talk guessing abilities as new characters make debut
Popular News
Robbie Williams is quarantining in the Caribbean after testing positive for Covid while on holiday with family
19/01/2021
Man Utd wonderkid Ramon Calliste, called ‘the next Giggs’, now owns luxury watch business and makes £5m a year – The Sun
26/03/2020
Megan Thee Stallion Addresses Criticism Over Twerking: ‘I Love to Shake My A**’
26/03/2020
Police guard shops to stop coronavirus panic-buyers and enforce social distancing – The Sun
26/03/2020
Coronavirus: Good Morning Britain’s Dr Hilary reveals ‘game-changing’ self-testing kit
26/03/2020
Recent Posts
This website uses cookies to improve your user experience and to provide you with advertisements that are relevant to your interests. By continuing to browse the site you are agreeing to our use of cookies.Ok