Matt Hancock warns cancer patients will only be treated if Covid-19 stays ‘under control’ – as he is savaged for ‘having no idea how many infected people are walking around’ after testing shambles saw 16.000 cases MISSED

Surgeons are calling for hospital beds to be ‘ring-fenced’ for planned operations, to avoid a ‘tsunami of cancellations’ due to rising Covid-19 cases.

A survey for the Royal College of Surgeons of England found most surgeons thought the NHS could not meet its targets to get surgery back to pre-pandemic levels.

Sir Simon Stevens, the head of the NHS in England, wrote to NHS trusts in July saying that, in September, they should hit at least 80 per cent of their last year’s activity for both overnight planned procedures and for outpatient or day case procedures. In October, this figure should rise to 90 per cent, the letter said.

But the Royal College of Surgeons said its analysis showed trusts were not hitting the target, with issues including surgeons being forced to wait for coronavirus test results and a lack of access to operating theatre space.

Cancer patients will only be treated if Covid-19 stays ‘under control’, Matt Hancock has claimed, as he faced a roasting from MPs over an Excel Spreadsheet blunder that has seen thousands wandering the streets despite being exposed to the virus.

The Health Secretary revealed in Parliament this morning that cancer referrals reached more than 90 per cent of pre-pandemic levels in July while 95 per cent of all cases received treatment within 31 days.

But he said the bounce-back could only be maintained if the virus stayed ‘under control’ with its transmission ‘suppressed’ across the UK – as cases spiral across the country with 12,594 new infections confirmed yesterday.

Labour viciously tore into the Health Secretary’s ever-growing list of blunders in the Commons, and demanded Hancock reveal whether all the contacts of those missed in the cataclysmic Excel blunder had been reached.

‘I listened carefully to what he said about a vaccine yesterday in light of the News about the Government’s aims to vaccinate 30million people,’ he warned. ‘There has been an expectation that the whole of the population would get vaccinated – not least because he said at the Downing Street press conference he “would hope, given the scale of the crisis, we would have the vaccine and everyone would be given the vaccine”.

‘They’re his words. Can he tell us for the 50 per cent of people who will not be vaccinated how soon will it take for life to return to normal for them?’

Number 10 revealed this afternoon that just 63 per cent of the ‘missing’ Covid-19 cases had now been traced, with 37 per cent still yet to be contacted. Assuming an average of three contacts per person – the delay means there could be at least 22,236 people still moving around as normal without taking any precautions despite being exposed to the virus.

The Government’s beleaguered Test and Trace system is under renewed scrutiny after it emerged 16,000 positive cases had been missed due to an Excel Spreadsheet error – where cases were cut off after a certain number of rows was reached.

The disastrous oversight, which ministers are keen to blame on the soon-to-be-defunct Public Health England, meant thousands were not contacted and traced despite testing positive for the virus. 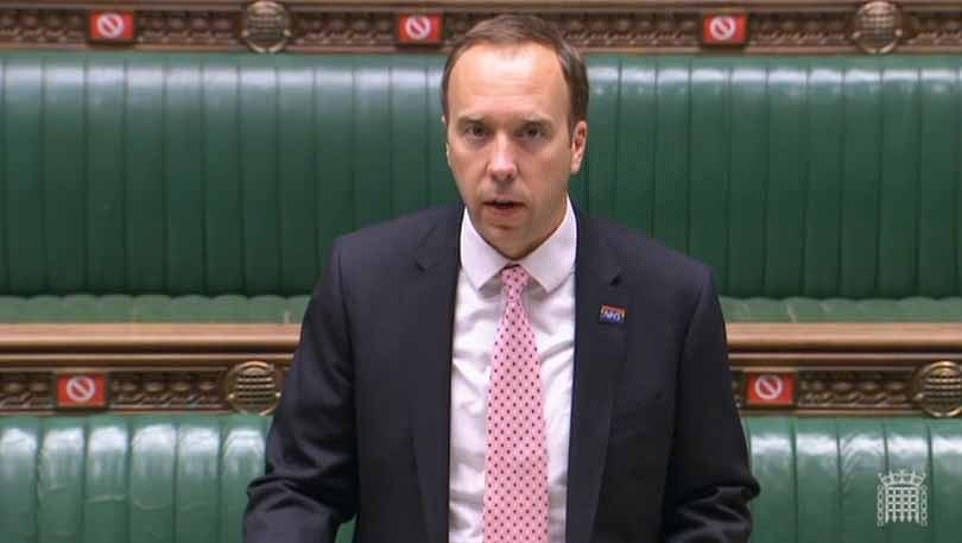 Telling the Commons operations for cancer patients may be rolled back in the face of spiralling coronavirus infections, Hancock said: ‘It’s critical for everybody to understand that the best way to keep cancer services running is to suppress the disease, and the more the disease is under control the more we can both recover and continue with cancer treatments.

He continued: ‘It’s beholden on all of us to make the case that controlling this virus not only reduces the number of deaths directly from coronavirus but also enables us as best as possible to recover the treatment that we need to for cancer and other killer diseases.’

The Government is planning to follow a ‘traffic light’ system with hospitals, where wards in private hospitals that have been reserved by the NHS are kept ‘Covid-19 free’ so that cancer procedures can continue.

Matt Hancock said that the reduced emergency pressures on private hospitals means ‘we can ensure they are part of the “green” part of the health service – that they are as free as is feasibly possible from coronavirus’.

‘(They will) therefore be able to carry out all sorts of cancer treatments and they are an important part of the recovery plan.’