Kim Jong Un admits North Korea is facing its ‘worst ever’ difficulties in rare admission of failure amid pandemic, US sanctions and spate of natural disasters

Kim Jong Un admitted North Korea is facing its ‘worst ever’ difficulties in a rare admission of failure during a Workers’ Party meeting on Wednesday.

The dictator faces what appears to be the toughest crisis of his nine-year rule as the already-troubled economy is hit by the coronavirus pandemic, a spate of natural disasters last summer and persistent U.S.-led sanctions.

During the party congress, Kim described the difficulties as the ‘worst-ever.’ 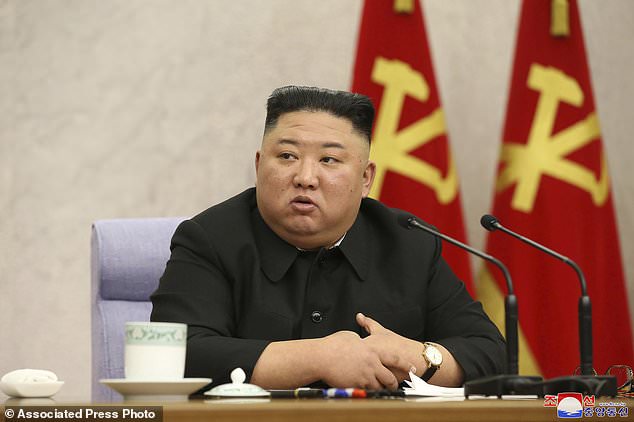 Kim Jong Un (pictured on February 10) faces what appears to be the toughest crisis of his nine-year rule as the already-troubled economy is hit by the coronavirus pandemic, a spate of natural disasters last summer and persistent U.S.-led sanctions

Kim spoke Wednesday during a Workers’ Party of Korea (WPK) meeting convened to follow up on decisions made at the ruling party´s congress in January.

Kim ‘stressed the importance to strengthen legal supervision and control over the establishment and executive process of the national economic plan,’ the official Korean Central News Agency said.

He said prosecutors and other law enforcement organisations must do more to ensure the economic plan is correctly executed and ‘stage a strong legal struggle for checking all kinds of illegal practices revealed in economic activities.’

Kim added that ‘all sectors and units should obey them unconditionally,’ KCNA said.

He said he’ll ‘offensively’ keep legal watch over agencies violating the socialist economic management order and take ‘powerful measures’ against any acts hampering efforts to strengthen industries, according to KCNA. 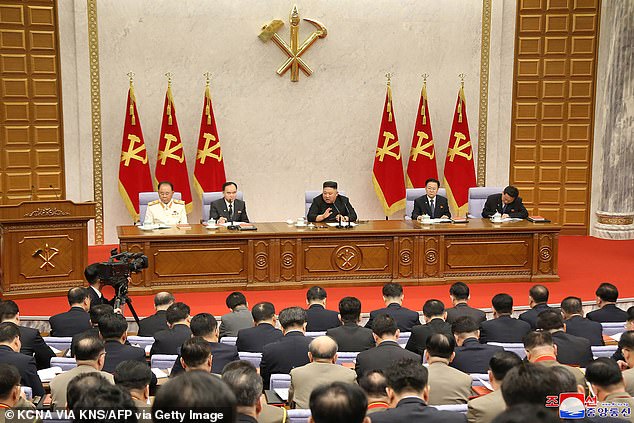 The new five-year plan centers on building a stronger self-supporting economy, reducing reliance on imports, making more investments in the metal and chemical industries and increasing production of consumer goods.

But some analysts say the new plan still lacks substance, noting that North Korea´s difficulties result from decades of mismanagement, self-imposed isolation and the sanctions imposed because of its nuclear program.

North Korea’s push to boost legal control over the economic plan shows Kim is ‘desperate to report progress over the new five-year plan to secure a stability of the Kim Jong Un government,’ said Kim Dong-yub, an analyst from Seoul´s Institute for Far Eastern Studies.

He said punishment for those embroiled in alleged corruption, negligence and incompetence will likely be harsh. 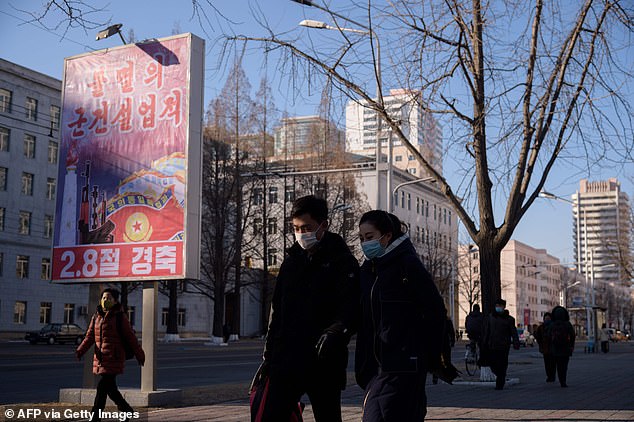 Kim Jong Un admitted North Korea is facing its ‘worst ever’ difficulties in a rare admission of failure during the meeting on Wednesday. Pictured: People wearing masks walk past a poster displayed on a street in Pyongyang marking the 73rd anniversary of the foundation of the Korean People’s Army (KPA), seen on on February 8

Kim’s Wednesday speech on the third day of the plenary session of the party’s Central Committee followed earlier secessions where he criticised government agencies for ‘passive and self-protecting tendencies.’

Kim also set forth unspecified future action to be taken by agencies responsible for external and South Korean affairs.

During January’s congress, Kim disclosed an array of sophisticated weapons under development and vowed to enlarge his nuclear arsenal to cope with what he called intensifying U.S. hostility.

He said the fate of relations between North Korea and the U.S. depends on Washington.

According to a study released in January, North Korea suffered the worst natural disasters in all of Asia, with four out of 10 people in the country being impacted by storms in 2019.

In the same year, the country also appealed for food aid as the regime cut rations because of drought as well as economic sanctions.