The traditional owners of the Juukan Gorge cave, which was destroyed by mining company Rio Tinto, have spoken out in opposition to a plan by billionaire Andrew Forrest to build 10 weirs on a Pilbara river.

The organisation representing the Puutu Kunti Kurrama and Pinikura people says the water project, which is located downstream from Pinikura land on Minderoo Station in Thalanyji people country near Onslow, would have a devastating impact and change the ecosystem for traditional owners upstream on the Ashburton River. 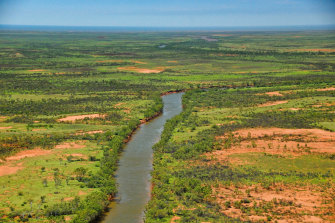 The Ashburton River in the Pilbara.Credit:BTAC

An application by Forrest and Forrest Pty Ltd for permission through Section 18 of the Aboriginal Heritage Act to build the weirs was rejected by former Aboriginal Affairs Minister Ben Wyatt but is now the subject of an appeal in the State Administrative Tribunal. The consent sought would be the same type of approval Rio had when it destroyed a cave at Juukan that showed signs of continuous human occupation for more than 46,000 years.

There are eight Aboriginal heritage sites within the project envelope including a ‘mythological’ listing of most of the river as a sacred place because of its connection to the powerful creation spirit the rainbow serpent, which is known as Wanamangura by the Thalanyji and the Warlu in other Pilbara languages.

A lawyer for the Buurabalayji Thalanyji Aboriginal Corporation has argued altering the river could hurt or even ‘kill’ the rainbow serpent which the traditional owners believe lives in the water body.

Legal representatives for Forrest and Forrest, however, say the serpent would still be able to move freely.

The PKKP people said in a statement that the creation of the Ashburton River by the serpent meant it needed to be free to flow so fish and eels could travel through.

“The creation stories must not be broken, and the water flow must not be blocked or the spirit of the Warlu will affect all people along this river,” it said.

“The spiritual impact of damming the waterway must not be ignored. There are many significant stories for this river which cannot be conveniently disregarded.

“The PKKP Aboriginal Corporation supports our family, the Thalanyji people, in their opposition to the construction of the weirs and the resulting impediment of the natural water flow through to the ocean.”

The project which utilises ‘leaky’ weirs – dam-like structures that slow the river whilst maintaining some environmental flow – raises the water table of an underground aquifer and would prolong water access during the drier parts of the year.

SAT hearings last Friday for the case heard from two anthropological experts, Edward McDonald who was put up by BTAC and David Trigger by Forrest and Forrest, with differing views on the significance of the river.

Dr McDonald said the Thalanyji people were concerned about the river and their responsibilities in taking care of it.

“They are concerned about impacts that may change the river and they may be held responsible by their neighbours,” he said.

Dr McDonald said he disagreed with the view of Dr Trigger that the Thalanyji would support the project if they had a greater understanding of it.

Forrest and Forrest barrister Kenneth Pettitt SC drew comparisons to the damming of the Ord River and asked Dr Trigger if one could conclude the Miriwoong and Gajerrong culture had not been impacted.

Dr Trigger said it was not devastating as it had not destroyed the culture.

“Indigenous cultures are robust as well as indicating apprehensions prior to such projects but I would agree if your question is ‘has the development devastated the culture?’ then my answer would be no,” he said.

Dr McDonald said such impacts on a river may not ‘devastate’ but did have perceived consequences for Aboriginal people.