Porsche driver Richard Pusey has been deemed unsuitable for a community correction order because of his notoriety, prompting calls for him to serve no more time in jail for filming four dying police officers after a horror road crash on the Eastern Freeway.

Pusey is to be sentenced on Wednesday on the rare charge of outraging public decency after he filmed the aftermath of the Kew crash on April 22 last year, when the officers were hit and killed by a truck. Pusey’s crude commentary is heard on the three minutes and eight seconds of footage he recorded on his mobile phone. 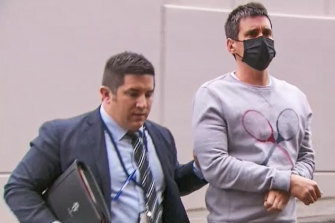 Leading Senior Constable Lynette Taylor, Senior Constable Kevin King and constables Glen Humphris and Josh Prestney were hit and killed when a truck driven by Mohinder Singh, addled by drug use and fatigue, veered into the emergency lane at 5.36pm.

The officers had pulled Pusey over minutes earlier for speeding at 149km/h and were discussing impounding his Porsche when they were hit. He was urinating on the side of the road when Singh’s truck hit the officers and the stationary cars.

Pusey’s lawyers had called on County Court judge Trevor Wraight to consider imposing on the 42-year-old a community correction order, a punishment with a focus on rehabilitation, which is served out of custody but usually has requirements of treatment plans for mental health or addiction problems.

But the court heard on Tuesday that Corrections Victoria had found Pusey was unsuitable as a candidate for a community corrections order because, according to Judge Wraight and defence counsel Dermott Dann, QC, he had a high public profile, he was unpopular, and would be “challenging” for authorities to manage.

The judge and barrister were critical of Corrections Victoria’s decision and said it was disappointing and indicative that Pusey was considered too hard to manage given his notoriety and complex personality disorder.

“The attitude of Corrections is he is beyond rehabilitation … it’s disturbing,” the judge said.

“I am absolutely astounded the way this case has been treated.”