Hong Kong: Pro-democracy activist Joshua Wong has filed a court challenge in Hong Kong against his disqualification from district polls, in a move which may have implications for this year's removals of opposition candidates for the city's legislature.

Wong, 23, was the only candidate in district council elections last year to have been disqualified, with authorities saying his candidacy contravened electoral laws that bar "advocating or promoting self-determination". 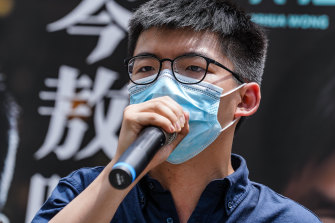 Barred: Joshua Wong previously said “Using [the] pandemic as an excuse to postpone the election is definitely a lie.”Credit:Bloomberg

Wong, who China calls a "black hand" of foreign forces, said at the time he supported the idea of a non-binding referendum for people to have a say over Hong Kong’s future status within China. But he is against independence which is anathema for Beijing.

"The reason I apply for judicial review is to make clear that the power of the returning officer keeps enlarging, they are just [pursuing a] political mission," said Wong, referring to officials who vet candidates.

Wong, who became an international figure after leading protests as a teenager in 2012 and 2014, was also among 12 opposition candidates recently disqualified from running in elections for seats in the city's legislature.

Those polls have been postponed by a year to Sept 2021, with the government citing coronavirus risks.

Grounds for disqualification included perceived subversive intentions, "opposition in principle" to a new national security law imposed by Beijing, and intentions to form a majority that could block government legislation.

If Wong's court challenge on Friday is accepted, it could pave the way for legal challenges to the latest round of disqualifications.

The Hong Kong government's decision to postpone the elections has been criticised by Western governments as an attempt to weaken the pro-democracy opposition in the Chinese-ruled, semi-autonomous city. Hong Kong authorities said the only consideration was public health.

Pro-democracy candidates won more than 80 per cent of the district council seats last year and hoped to win an unprecedented majority in the legislature, riding momentum built on protests in 2019 and fuelled by resentment over the new security law.

Wong faces multiple charges for taking part in unlawful assemblies related to protests last year and on June 4, 2020 at a vigil commemorating China's 1989 bloody crackdown on pro-democracy protesters in and around Beijing's Tiananmen Square. The latest were laid on Thursday.

Beijing imposed the new security legislation on June 30 in response to last year's protests to punish anything China considers to be secession, subversion, terrorism or collusion with foreign forces with up to life in prison.

Critics of the legislation say it erodes the freedoms the former British colony was promised when it returned to Chinese rule in 1997, while supporters say it will bring stability after a year of unrest and safeguard China from foreign interference.