Home » World News » ‘It’s part of the game. It should not be’: The racism hurting local cricket

‘It’s part of the game. It should not be’: The racism hurting local cricket

It doesn’t happen every week, but every now and again, a casual comment from an opposition player reminds Bhavin Nagar they see him as different.

"Let’s get this curry back in the kitchen," was one less than charming example during a south-eastern suburbs competition game, as he was batting. 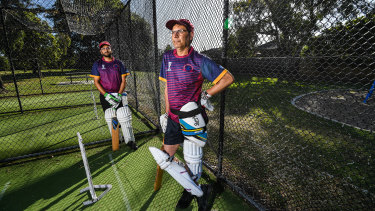 He estimates that "one in 10 games I’ve played, people try to make some not so nice comments".

Many of these "occasional racist comments" come from younger players, which worries him.

Mr Nagar, 55, an Indian immigrant, doesn’t dwell on it and emphasises that his own club, Omega Cricket Club in Moorabbin, are a friendly bunch and he’s had no issues in his six years playing, nor had his son, Amay, 26, who started there as a 10-year-old.

"There are six or seven current players from south Asian heritage and we always feel included and an integral part of the club," Mr Nagar said.

"We don’t feel like we’re outsiders or any different. Just our names are different."

But Mr Nagar isn't surprised at allegations the crowd at the Sydney Test hurled racist taunts at the Indian team.

He said racism "is part of the game. It should not be". Sledging, which was "entrenched" in the game, easily descended into racial slurs, either between teams, or between crowd and players, he said.

Friends at other cricket clubs tell Mr Nagar they’re not treated well – for example not being selected for games or not feeling welcome at social events.

Karthik Subbaiah, 36, who plays for Hampton United Cricket Club in Melbourne’s south-east, has had positive experiences. "For someone who is fairly new to Australia, I’ve found the club to be welcoming, friendly and fantastic all around," he said.

But the father of a western suburbs player who didn't want to be named for fear of reprisals for his son said "sub-continental kids will be always less preferred".

Last year his son had the best bowling statistics in his region, was picked for a major under 15 competition squad, and yet wasn’t given a chance to bowl all season.

"I showed them [selectors] the stats … they said 'we will do whatever we like'," he said.

Hussain Hanif, who was until last winter a diversity and inclusion specialist for Cricket Victoria, said he used to receive up to 40 reports a year of racism, from community players, ranging from verbal slurs to a player hit with a cricket bat.

Mr Hanif, who is from a Fijian-Indian Muslim background, played for Melbourne northern suburbs teams from 2012 to 2019 and was called a "black bastard" and told "go back to your country" by opposition players.

Once, a rival player put him in a headlock as they were about to shake hands. "The umpires said 'we didn’t see anything'."

Mr Hanif said players complaining of racial abuse would tell him "the association [of suburban clubs] has done nothing about it, my club hasn’t supported me".

Mr Hanif said education was key and clubs should back players. "The associations need to have the right people employed to try and break the barriers."

Cricket Victoria did not respond to calls.

Related posts:
adidas Originals NMD_R1 Spectoo Is a Futuristic, Data-Inspired Rework of the New-Classic
So Much for Dry January?
Popular News
Robbie Williams is quarantining in the Caribbean after testing positive for Covid while on holiday with family
19/01/2021
Man Utd wonderkid Ramon Calliste, called ‘the next Giggs’, now owns luxury watch business and makes £5m a year – The Sun
26/03/2020
Megan Thee Stallion Addresses Criticism Over Twerking: ‘I Love to Shake My A**’
26/03/2020
Police guard shops to stop coronavirus panic-buyers and enforce social distancing – The Sun
26/03/2020
Coronavirus: Good Morning Britain’s Dr Hilary reveals ‘game-changing’ self-testing kit
26/03/2020
Recent Posts
This website uses cookies to improve your user experience and to provide you with advertisements that are relevant to your interests. By continuing to browse the site you are agreeing to our use of cookies.Ok