Home » World News » Inside ‘war zone’ of New York, where ambos are as busy as September 11

Inside ‘war zone’ of New York, where ambos are as busy as September 11

New York: The first of many calls that night involved a 24-year-old man who had a fever, body aches and a cough that sounded like a cement mixer.

While the Brooklyn paramedics took the man's fever – 39.4 degrees –they noticed frightening vitals that hinted at the coronavirus: a critically low level of oxygen was flowing into his otherwise clear lungs, while his heart thumped with the intensity of a marathon runner's. He was taken to the nearest hospital. 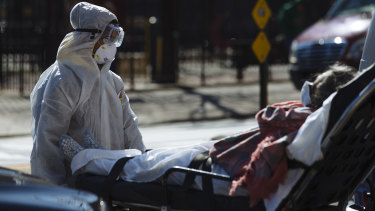 A patient is brought into the Elmhurst Hospital Centre in the Queens borough of New York.Credit:Bloomberg

Then almost immediately came the next call: a 73-year-old man with symptoms similar to the young man's. They took him to the hospital, too.

"It's all a war zone," one of the paramedics said.

Days later, another paramedic, Phil Suarez, was dispatched to two homes in Upper Manhattan's Washington Heights neighborhood, where entire families, living in cramped apartments, appeared to be stricken with the virus.

"I'm terrified," said Suarez, who has been a paramedic in New York City for 26 years and had assisted in rescue efforts during the September 11, 2001, terror attacks and later served in the Iraq War. 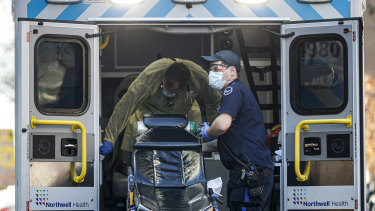 Medical workers load oxygen and disinfect surfaces of an ambulance outside a COVID-19 testing side at Elmhurst Hospital Centre.Credit:AP

Even as hospitals across New York become inundated with coronavirus cases, some patients are being left behind in their homes because the health care system cannot handle them all, according to dozens of interviews with paramedics, New York Fire Department officials and union representatives, as well as city data.

In a matter of days, the city's 911 system has been overwhelmed by calls for medical distress apparently related to the virus. Typically, Emergency Medical Services gets about 4000 calls a day. On Thursday, dispatchers took more than 7000 calls — a volume not seen since the September 11 attacks. The record for amount of calls in a day was broken three times last week.

Because of the volume, emergency medical workers are making life-or-death decisions about who is sick enough to take to crowded emergency rooms and who appears well enough to leave behind. They are assessing on the scene which patients should receive time-consuming measures like CPR and intubation, and which patients are too far gone to save. 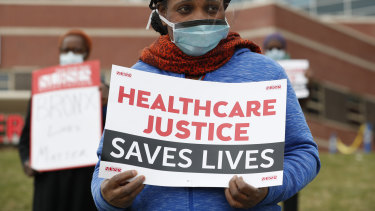 "It does not matter where you are. It doesn't matter how much money you have. This virus is treating everyone equally," the Brooklyn paramedic said.

The amount of work has been record-setting for the city's 911 system, said Frank Dwyer, a Fire Department spokesman.

The department said it has started rationing protective gear to stave off potential shortages. Earlier this month, the department told workers that they must turn in their used N95 masks — which filter out 95 per cent of airborne particles when used correctly — to receive a new one.

Three weeks ago, the paramedics said, most coronavirus calls were for respiratory distress or fever. Now the same types of patients, after having been sent home from the hospital, are experiencing organ failure and cardiac arrest.

"We're getting them at the point where they're starting to decompensate," said the Brooklyn paramedic, who is employed by the Fire Department. "The way that it wreaks havoc in the body is almost flying in the face of everything that we know."

Since many hospitals are in dire need of personal protective equipment like N95 masks, paramedic crews employed by the hospitals also face shortages. The Brooklyn paramedic said she had started sewing her homemade masks with bandannas and coffee filters.

Another paramedic in Brooklyn said she had been using the same N95 mask for days. This past week, as she and her partner exited an apartment building after tending to a patient, the building's supervisor — noticing the pair's worn equipment — met them downstairs and shoved new N95 masks and a can of Lysol into their arms.