The number of ambulance call-outs and emergency room presentations related to family violence incidents has risen in Victoria, fuelling concerns the pandemic has led to an increase in the severity of attacks and injuries.

Data released by the Crime Statistics Agency on Wednesday revealed that Ambulance Victoria had recorded a 14.7 per cent increase in the number of family violence-related attendances in the year to June when compared with the year before. 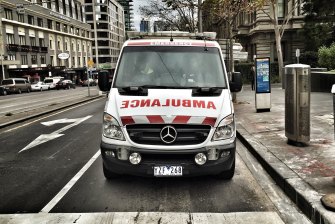 Ambulance Victoria recorded a 14.7 per cent increase in the number of family violence-related attendances in the year to June.Credit:Paul Rovere

Between April and June, when Victoria went into its first lockdown, paramedics responded to 16.4 per cent more family violence-related call-outs than in the same period last year.

Victorian public hospital emergency departments also recorded an increase of 13.5 per cent in the number of family violence-related injuries in the year to June.

"For some victim-survivors, the violence has intensified and become more prolonged during the pandemic," she said.

"Others are reporting family violence for the first time. Specialist family violence services also report that they are getting an increased number of calls from third parties, such as friends and family, who are concerned about their loved ones."

She said that people are finding ways to use the pandemic to justify abusive and controlling behaviours, and new forms of violence emerged.

"Isolating someone from family and friends is a very common tactic in family violence. Pandemic restrictions are providing perpetrators with more opportunities to force victim-survivors to isolate from their family, friends and other community support networks, as well as support they might otherwise find in their workplaces."

Crime Statistics Agency chief statistician Fiona Dowsley said the growing number of people seeking emergency help was concerning and could indicate an increase in the severity of family violence.

Victoria Police said in September it recorded 88,214 family violence incidents in the year from June 2019 to June this year, a 6.7 per cent rise from the preceding 12 months.

The figures included an increase in incidents where children were involved, both as perpetrators and victims. Elder abuse is also on the rise, with more people aged 55 and over accessing support services or seeking a family violence protection order.

The data released by the Crime Statistics Agency on Wednesday also showed that the number of finalised family violence intervention orders issued decreased by 5.3 per cent in both the Magistrates and Children’s courts.

The statistics agency said interruptions to some justice system processes due to the COVID-19 pandemic could possibly explain the decrease.

Related posts:
How does the Pfizer/BioNTech vaccine work and who will get it?
FIFTY NHS hospitals ready to roll out Pfizer Covid vaccine next week
Popular News
Trump to hold farewell event at Andrews before leaving DC
16/01/2021
Man Utd wonderkid Ramon Calliste, called ‘the next Giggs’, now owns luxury watch business and makes £5m a year – The Sun
26/03/2020
Megan Thee Stallion Addresses Criticism Over Twerking: ‘I Love to Shake My A**’
26/03/2020
Police guard shops to stop coronavirus panic-buyers and enforce social distancing – The Sun
26/03/2020
Coronavirus: Good Morning Britain’s Dr Hilary reveals ‘game-changing’ self-testing kit
26/03/2020
Recent Posts
This website uses cookies to improve your user experience and to provide you with advertisements that are relevant to your interests. By continuing to browse the site you are agreeing to our use of cookies.Ok