In UN speech, Trump blasts China for ‘unleashing virus plague on the world’

US President Donald Trump used the United Nations General Assembly on Tuesday to attack China's handling of the coronavirus pandemic, saying the world body "must hold China accountable" for its actions related to the outbreak.

By contrast, China's President Xi Jinping struck a conciliatory tone in his pre-recorded virtual address to the General Assembly, calling for enhanced co-operation over the pandemic and stressing that China had no intention of fighting "either a Cold War or a hot one" with any other country. 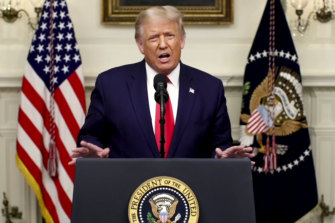 The leaders of the world's two largest economies laid out their competing visions as relations have plunged to their worst level in decades against the backdrop of the pandemic, with coronavirus tensions aggravating trade and technology disputes.

Trump, facing a November re-election battle with the United States dealing with the world’s highest official number of deaths and infections from the coronavirus, focused his speech on attacking China.

Trump accused Beijing of allowing people to leave China in the early stages of the outbreak to infect the world while shutting down domestic travel.

"We must hold accountable the nation which unleashed this plague onto the world, China," he said in remarks taped on Monday at the White House and delivered remotely to the General Assembly due to the pandemic.

"The Chinese government, and the World Health Organisation – which is virtually controlled by China – falsely declared that there was no evidence of human-to-human transmission," he said.

"Later, they falsely said people without symptoms would not spread the disease … The United Nations must hold China accountable for their actions."

The President promised to distribute a vaccine and said: "We will defeat the virus, and we will end the pandemic."

"The world is at a crossroads. At this moment, the world needs more solidarity and cooperation, but not confrontation," he said. 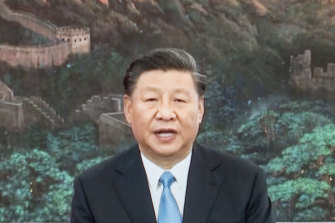 In his speech, China’s President Xi Jinping called for a global response to the coronavirus pandemic. Credit:Bloomberg

Trump also attacked China's record on the environment, but levelled no direct criticism at Beijing over human rights.

The President, a frequent critic of the United Nations, said that if it was to be effective, it must focus on "the real problems of the world" like "terrorism, the oppression of women, forced labour, drug trafficking, human and sex trafficking, religious persecution, and the ethnic cleansing of religious minorities."

Earlier, UN Secretary-General Antonio Guterres warned that the world was "moving in a very dangerous direction" with US-China tensions.

"We must do everything to avoid a new Cold War," he told the assembly. "Our world cannot afford a future where the two largest economies split the globe in a Great Fracture – each with its own trade and financial rules and internet and artificial intelligence capacities.

"A technological and economic divide risks inevitably turning into a geo-strategic and military divide. We must avoid this at all costs."

Related posts:
'RuPaul's Drag Race' Queens Speak Out Against Racism in the Fandom
Baseball legend Cal Ripken Jr. says his prostate cancer ‘could have been a much different result’ if he hadn’t been a sports star
Popular News
Stolen dogs 'waiting to be turned into grab-and-go meals' are rescued
27/10/2020
Man Utd wonderkid Ramon Calliste, called ‘the next Giggs’, now owns luxury watch business and makes £5m a year – The Sun
26/03/2020
Megan Thee Stallion Addresses Criticism Over Twerking: ‘I Love to Shake My A**’
26/03/2020
Police guard shops to stop coronavirus panic-buyers and enforce social distancing – The Sun
26/03/2020
Coronavirus: Good Morning Britain’s Dr Hilary reveals ‘game-changing’ self-testing kit
26/03/2020
Recent Posts
This website uses cookies to improve your user experience and to provide you with advertisements that are relevant to your interests. By continuing to browse the site you are agreeing to our use of cookies.Ok