Home » If Afghanistan was bad enough, let’s not countenance a war with China

If Afghanistan was bad enough, let’s not countenance a war with China

The US decision to pull out of its longest war is an admission of the war’s hopelessness. Announcing the end to 20 years of allied occupation of Afghanistan, Joe Biden said as much himself: “We went to Afghanistan because of a horrific attack that happened 20 years ago. That cannot explain why we should remain there in 2021.”

So why should the US and its allies remain? Not sure, really, the US President suggested: “We delivered justice to bin Laden a decade ago, and we’ve stayed in Afghanistan for a decade since. Since then, our reasons for remaining in Afghanistan are becoming increasingly unclear, even as the terrorist threat that we went to fight evolved.” 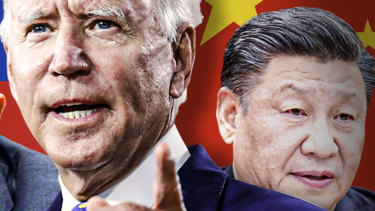 The US switches its military resources to the Indo-Pacific to prepare for any potential conflict with China. Credit:AP

So what was everyone waiting for? “We cannot continue the cycle of extending or expanding our military presence in Afghanistan, hoping to create ideal conditions for the withdrawal, and expecting a different result.”

Putting it all together: We don’t really know why we’re in Afghanistan; it’s not going to get any better; so we may as well leave now. This amounted to a thoroughgoing admission of strategic pointlessness after the deaths of more than 3500 coalition troops including 41 Australians, an estimated 100,000 Afghans and a total bill of well over $US2 trillion.

But it’s not just about Afghanistan. It’s also about America’s bigger priorities. Biden said in his April 14 announcement: “Rather than return to war with the Taliban, we have to focus on the challenges that are in front of us.”

The top two? He cited the need to disrupt terrorist networks worldwide, and to “shore up American competitiveness to meet the stiff competition we’re facing from an increasingly assertive China”.

One of Biden’s senior officials elaborated in a background briefing for White House reporters the next day. Explaining the need to switch from Afghanistan to China, the official, who remained unnamed, said that a key reason “is actually to free up the time and attention and resources from our senior leadership and our military to focus on what we believe are the fundamental challenges of the 21st century. And they lie, fundamentally, in the Indo-Pacific.

“Afghanistan was really receiving a disproportionate amount of time and focus and attention of the senior-most leadership; and that, ultimately, we had to, you know, make a choice about where we wanted to focus our strategic efforts. And I think it was thought that more of that should be in the western Pacific.”

This is an even bigger admission. At the end of the Cold War, the US adopted a two-war doctrine – that it would be structured to fight and win two major-theatre wars at the same time. One in the Middle East, say, and one in Asia. But in the face of budget pressures, this was scaled back to what has been called a 1½-war doctrine.

By pulling out of its holding operation in Afghanistan to switch attention to China, we now see signs that top US officials are conceding that even 1½ wars might be too much to fight simultaneously. And that, against a formidable People’s Liberation Army, the US could need to concentrate all its resources on a single major war if it hopes to prevail.

A new annual report on worldwide military spending gives a clue as to why. The US has been inconsistent with its military budgeting. Over the past decade, Washington cut its defence budget for the first seven years and increased it in the last three, shrinking under Obama then expanding under Trump. The net result? The Pentagon has 10 per cent less funding than it had a decade ago.

Compare that with China’s steadiness. Beijing last year increased its military spending for the 26th consecutive year. Over the decade, it’s up by an astounding 76 per cent, according to the new report from the Stockholm International Peace Research Institute.

China is not the only country to keep consistently building its military budgets. But where other regional powers lifted spending steadily over the decade – such as South Korea by 41 per cent, India by 34 and Australia by 33 per cent – they couldn’t compete with the speed of China’s step-up.

This makes China the world’s second-biggest defence spender, three times the size of the next biggest, India, and four times that of Russia. In absolute terms, America is still predominant with annual spending last year of $US778 billion against China’s estimated $US252 billion.

But China is focused on the Indo-Pacific while America still has bases worldwide. China is purposeful where America is erratic. And China’s commanders can plan where America’s must guess.

This means it’s not only wise for Biden’s America to restore relations with US allies to combine their strength, but also vital for its success in any war against Beijing.

Defence Minister Peter Dutton helped snap Australia out of its daydream on the weekend by pointing out that, while “nobody wants to see conflict between China and Taiwan or anywhere else”, “I don’t think it should be discounted.” 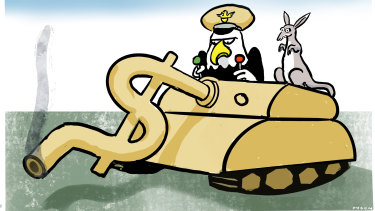 And if China does move against Taiwan militarily, two grave questions immediately present themselves. Will the US defend Taiwan? Biden’s rhetoric is moving to suggest it would indeed use force to protect the democratic island of 25 million from a Beijing takeover.

Second, would Australia send forces in support? Australia’s rhetoric is studiously noncommittal. But every trend in recent years moves Canberra closer to supporting any US action against Beijing. The most powerful of those trends, of course, is China’s own aggression.

But, as the ANU’s Hugh White points out in The Financial Review, this war would be different: “It would be nothing like Afghanistan, a small war in a distant place that has touched very few of us. It would be more like the world wars of the 20th century – and perhaps worse, if it were to go nuclear.”

“The costs of not going to war over Taiwan would be real and serious, but those costs cannot be avoided by fighting a war that cannot be won.”

The actions of the US suggest a nation doing everything it can to make sure that it could win. As part of that, we all need to look searchingly at the failures of the US and its allies in Afghanistan. We cannot afford another hopeless war.