Toronto: Huawei Technologies had a plane waiting to take Chief Financial Officer Meng Wanzhou back to China from Vancouver as a key verdict in her extradition case was to be handed down last May, prosecutors said in a Canadian court.

Meng, 48, has been fighting extradition from Canada to the United States since her arrest at Vancouver International Airport over two years ago. She has been charged with bank fraud for allegedly misleading HSBC on Huawei's business dealings in Iran, causing the bank to break US sanctions. 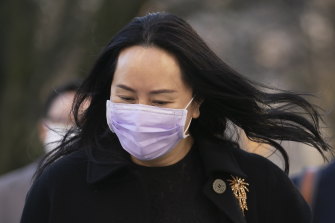 Meng Wanzhou, chief financial officer of Huawei, outside the BC Supreme Court on Wednesday.Credit:AP

She has said she is innocent and is fighting extradition. She was released on bail shortly after her arrest and has been under house arrest in Vancouver since then.

In May, a Canadian judge sided with prosecutors representing the Canadian government on a key component of Meng's case, allowing her extradition hearing to continue. That ruling supported the prosecutors' case that Meng's alleged actions were illegal in both Canada and the United States and therefore met the standard of double criminality.

Before the ruling was announced, Huawei chartered a 777 Boeing from China Southern Airlines ready to take Meng back to China, should the decision on double criminality come down in her favour, prosecutor John Gibb-Carsley said during a bail variation application hearing.

The move was revealed during Gibb Carsley's cross-examination of Meng's husband, Liu Xiaozong, as Huawei lawyers sought to loosen her bail conditions and drop the security detail that monitors her constantly. 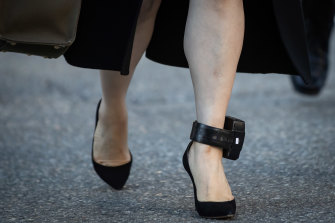 "Are you aware … there were arrangements made to take your wife, Ms Meng, back to China if she was successful in a court decision?" Gibb-Carsley asked.

Liu said he was.

"Are you aware that members of the Chinese consulate were also involved in making arrangements for that flight being chartered?" Gibb-Carsley said.

Meng has received multiple death threats, including bullets in the mail, while under house arrest, the court also heard.

The threats were revealed during testimony by Doug Maynard, chief operating officer of Lions Gate Risk Management, the company providing her security detail.

Meng received "five or six" threatening letters at her residence in June and July 2020. The Vancouver Police Department was involved in examining the evidence of the threats, Maynard testified in the British Columbia Supreme Court.

The letters were "coming by mail and they were easily identifiable by markings on the outside," Maynard said.

Lions Gate worked with Meng and her staff to ensure the evidence was not contaminated and opened the letters to confirm they were threats, Maynard said, adding that "sometimes there were bullets inside the envelopes."

The sender's identity and possible motivation were not disclosed.

The exact role of the Vancouver police was not clear, and neither was the outcome of any investigations. Police did not immediately return a request for comment.

Meng's bail hearing will wrap up on Wednesday afternoon, Vancouver time. Her extradition case is set to finish in May.

Related posts:
Who are Lori Harvey's ex-boyfriends?
Organizers State It Is "Absolutely Impossible" To Postpone Tokyo Olympics
Popular News
Actor Derek Fowlds left an estate worth more than £3million
16/01/2021
Man Utd wonderkid Ramon Calliste, called ‘the next Giggs’, now owns luxury watch business and makes £5m a year – The Sun
26/03/2020
Megan Thee Stallion Addresses Criticism Over Twerking: ‘I Love to Shake My A**’
26/03/2020
Police guard shops to stop coronavirus panic-buyers and enforce social distancing – The Sun
26/03/2020
Coronavirus: Good Morning Britain’s Dr Hilary reveals ‘game-changing’ self-testing kit
26/03/2020
Recent Posts
This website uses cookies to improve your user experience and to provide you with advertisements that are relevant to your interests. By continuing to browse the site you are agreeing to our use of cookies.Ok