How the kitchen customs of yesteryear can help you save cash

Pressure cookers, larders and even Spam! MISS MONEYSAVER shares how the kitchen customs of yesteryear can help you save cash amid the cost-of-living crunch

When I was growing up, my mum used a pressure cooker for practically every meal: vegetables, stew — even steamed puddings.

It was a big, heavy contraption, hermetically sealing in the food with a weight on the steam hole that screamed louder as the heat in the pan built up. What with that and Radio 4 blaring out at top volume, coming down to dinner in our kitchen could be a stressful experience!

I always vowed that I would never use a pressure cooker myself, and until recently I thought they’d gone the way of the washing mangle and carpet-beater. But now I hear that they’re coming back with a vengeance.

Sales of pressure cookers are up 110 per cent at John Lewis, no less!

‘As well as reducing your energy costs, pressure cookers can save you money on the cuts of meat you buy,’ Helen Carey, a chef at Waitrose Cookery School, tells me — and indeed at Waitrose sales of cheap cuts of meat are on the up: beef shin by 23 per cent, ox cheek by 9 per cent and lamb neck by 4 per cent.

Pressure cookers drastically reduce cooking times, making casseroles, curries, chillies and other slow-cook dishes in as little as 30 to 40 minutes. Suddenly I can see why my mum loved her pressure cooker so much. 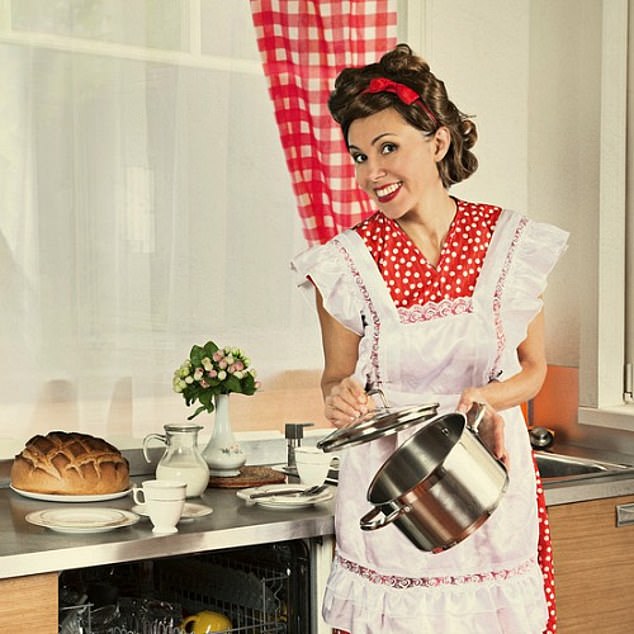 When I was growing up, my mum used a pressure cooker for practically every meal: vegetables, stew — even steamed puddings

The new pressure cooker models are easier and safer to use, too, which is a relief as I was always afraid that ours could spontaneously explode at any minute. Some even have settings that will switch everything off automatically, before it gets too excitable.

The best bit? They’re relatively affordable, with basic stove-top models starting at £18.59 at OnBuy.com and electric, standalone ones from £60 at John Lewis.

As well as our pressure cooker specials, my family ate loads of homegrown vegetables and fruit — as are many more families now, as the popularity of allotments booms. My dad lovingly tended a big vegetable and fruit patch at the end of the garden and we had all sorts, from carrots to asparagus and Cox’s apples to artichokes.

I’m hugely grateful for that, as it taught me what fresh produce tastes like, as opposed to the largely bland versions in the supermarkets today. However, we also ate plenty of tinned goods, particularly in the winter, which make a great, affordable and long-life replacement for the fresh versions. 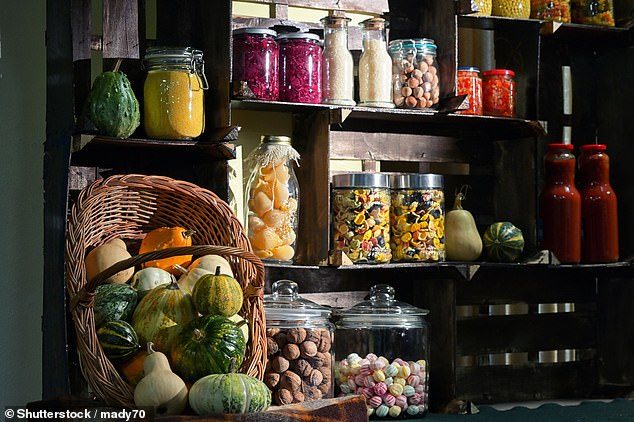 Our larder stayed cool by having no windows but a sort of slatted square gap that let in the cold air from outside. You had to keep the door firmly shut in the winter or the cold air would come into the kitchen, but I don’t remember it ever being a problem (file image)

I’m particularly partial to tinned pineapple, tinned peaches and even tinned mushrooms (don’t ask me why). The BBC has a whole section of its Good Food website dedicated to tinned food (www.bbc.co.uk/food/collections/cooking_with_tins) where you can find out how to make tin-based favourites such as tuna and sweetcorn pasta salad, sausage casserole and fishcakes, which all bring back memories for me.

Of all things, Spam is also back on the menu. We didn’t eat Spam at home, but we did have potted meat paste — when we went to Grandma and Grandpa’s, we had picnics with this grey meat paste or cheese and pickle sandwiched between Mother’s Pride white sliced bread.

But what’s made a surprising return to popularity today is Spam fritters. They made for the worst school lunches (matched only by semolina pudding), although I know many people look back on them with fondness. Iceland is now doing a roaring trade in pre-made Spam fritters (£2.25 for a 300g pack).

If you wanted to make your own, it’s simple — the Spam website itself has a recipe which involves slicing, dipping in a thick batter of flour and water, then frying. Oh go on, then . I’ll make them myself tonight and see what they’re like. 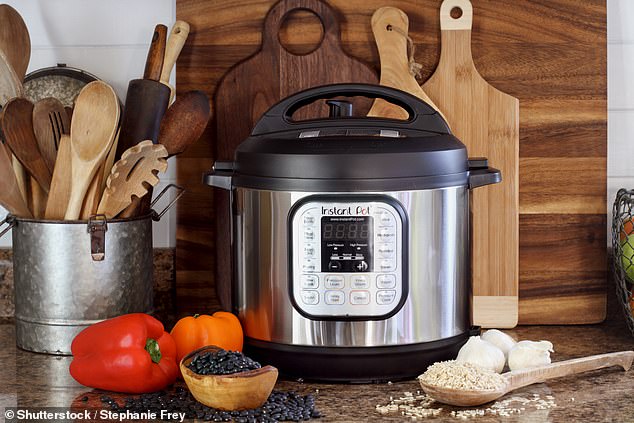 The new pressure cooker models are easier and safer to use, too, which is a relief as I was always afraid that ours could spontaneously explode at any minute. Some even have settings that will switch everything off automatically, before it gets too excitable (file image)

Rivalling pressure cookers, sales of slow cookers are also up. They’re great for cooking tough, cheaper cuts of meat and allowing dried beans and pulses to cook through — put it on in the morning and you’ll come home to quite the wholesome feast later that day.

It’s a more energy-efficient way of cooking the classic casserole, for which cheap stewing steak was a staple ingredient when I was growing up. Ours was done in a casserole dish in the oven.

However, the key thing is that the oven was never put on for just one thing. If it was on, it was full with extra dishes like rice pudding, apple pie and cakes added in — every shelf used to make the most of the electricity. And we’d make the most of everything. Broken biscuits went in puddings, over-ripe bananas thrown into a cake, mashed potato and veggies turned into bubble and squeak and Sunday’s leftover roast became Monday’s cold meat and pickle.

Even old clothes and sheets were turned into rags and dusters, and used envelopes clipped into a pile and used for shopping lists. What’s stopping us doing the same now?

And much, of course, is made of the home freezer, a modern essential ever since the chest freezers of the middle of the 20th century. But going back a little further, what about the larder? There’s another great idea that has somehow been phased out.

Our larder stayed cool by having no windows but a sort of slatted square gap that let in the cold air from outside. You had to keep the door firmly shut in the winter or the cold air would come into the kitchen, but I don’t remember it ever being a problem.

The larder was a treasure trove of deliciousness, keeping vegetables, cold meats, cake and more cool and fresh for days.

Fridges are all well and good, but many foodstuffs do better in ‘cool’ than ‘cold’ temperatures. Perhaps we should start a campaign to ‘bring back larders’.

At least the larder wouldn’t be foiled by a power cut — although I must confess the era of power cuts was rather fun for my brother and me. We had an open fire in the lounge and our dad would boil eggs on it. It was also the only time we used an ancient toasting fork that had languished in the fireplace for years for what it was intended: toasting bread.

It was at that time Grandma told us tales of wartime ration recipes too, most of which sounded just weird to us. However, some don’t look so silly now.

Website the1940sexperiment.com has more than 200 wartime recipes that anyone can try including parsnip pie, pickled beetroot and even the Guernsey Potato Peel pie (from the film).

Looking through these recipes is like getting tips from your grandma, or great-grandma, on how to make the housekeeping money stretch and keep everyone fed and warm through the coming winter. Just what we all need in these straitened times.

■ Got a question for Jasmine? Email her at [email protected] MoneyMagpie.com

Have you switched round your summer and winter clothes yet? Each time I pack up last season’s clothes I find a pile of stuff that I don’t want anymore.

But you needn’t head straight for the charity shop or recycling centre — you can now swap a bag of used clothes for vouchers at some big clothing chains. John Lewis, New Look, H&M, M&S, George at ASDA and Schuh all have recycling schemes where you can swap old clothes or shoes for vouchers.

New Look offers a 15 per cent off voucher if you donate a bag of clothing at a hospice charity shop (newlook.com/uk/hospiceuk). 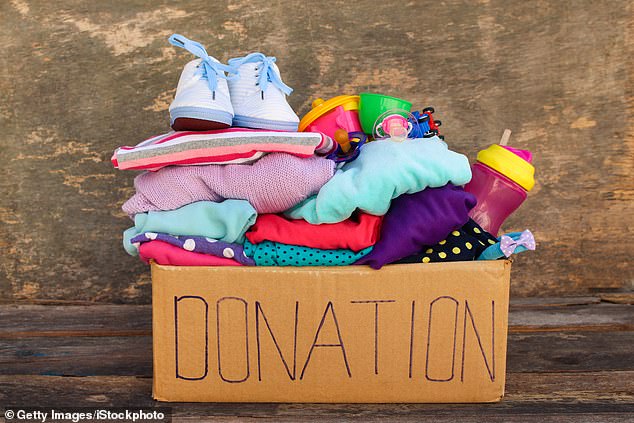 Have you switched round your summer and winter clothes yet? Each time I pack up last season’s clothes I find a pile of stuff that I don’t want anymore

Donate any bag of unwanted clothes at H&M for a £5 voucher to spend in the store. See www2.hm.com/en_gb/sustainability-at-hm/our-work/close-the-loop.html

Give old clothes to Oxfam and you can get a £5 voucher towards a £35-plus spend in Marks & Spencer. At least one of the items must be labelled M&S.

Bag up ten or more unwanted clothes and textiles and donate them at an ASDA store for a 10 per cent off code to use at George. Check in advance at takeback.george.com to see if your local store is participating.

Get a £5 voucher towards a £25-plus spend at Schuh (schuh.co.uk/help/sell-your-soles) for every pair of shoes donated in the store. The shoes are sent to Recyclatex which reuses 98 per cent of the materials.

John Lewis awards £5 credit for returning your old clothes as part of the FashionCycle scheme. You have to use the credit on a new clothing purchase at the same time, and you must be a member of the free My John Lewis Scheme (johnlewis.com/our-services/my-john-lewis).

A few weeks ago I mentioned solar-powered battery packs to use in blackouts (or if you just want to cut your bills).

Well, I’ve also discovered solar-powered lights that you can power-up during the day, then use at night to light your home. A friend of mine has bought a pack of Firefly LED Fence Solar Lights (pack of 8) for £9.99 at Home Bargains.

They’re meant to be garden lights but he just has them loose, puts them outside during the day to power up, and then uses them to light his home at night. They last about five hours, enough time from sunset until bed.

There are about 1.6 million lost or forgotten pension pots in the UK, worth a total £19.4 billion. That’s an average of £13,000 per pension pot and about one in 30 people could have a pension they didn’t know they had. Tomorrow is National Pensions Tracing Day when anyone can look at nationalpensiontracingday.co.uk for potential hidden pension treasure. Recently one person found three pensions worth a total of £55,000 and someone else found two pensions, worth more than £80,000. So have a look — you never know!

A rare 50p coin has sold for £156 on eBay, so check your change! The coin was released in 2009 to mark 250 years since Kew Gardens opened in 1759. It features the Great Pagoda at the Royal Botanic Gardens on one side (pictured) and Queen Elizabeth II on the other. About 210,000 were produced. If you have one, it could pay for your shopping for a month! 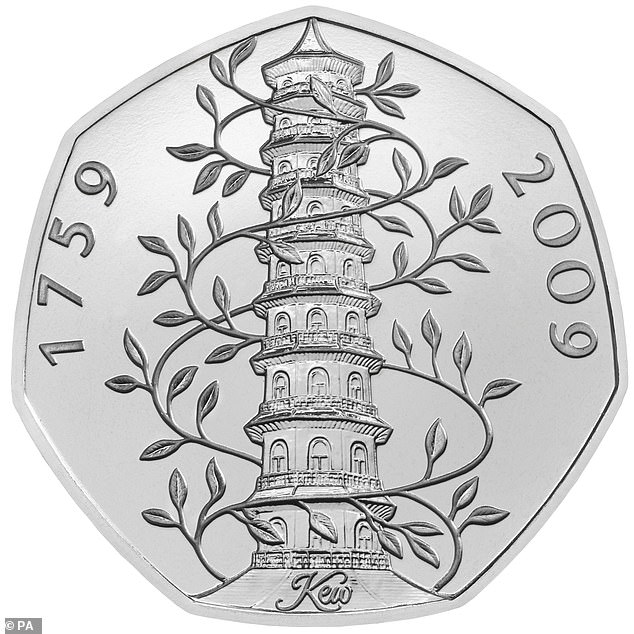 You can get a free meal of a baked potato and baked beans at Morrisons if you ask for ‘Henry’ at the café counter. Morrisons have teamed up with Heinz to offer more than 160,000 free meals to children and adults until November 6. At Greggs, you can get a free sausage roll (vegan or otherwise) or a bake with a hot drink to wash it down if you download their app before January 2, 2023.

Everything5pounds.com specialises in clothes and accessories (I’ve just ordered some hair bands and a top). Not everything is exactly £5 — I have spotted a few items at £5.50 (shocker!). Similarly Only5pounds.com has home and garden products at under £5. Both sites have excellent reviews.

We’re told we should drink 2 litres of water a day: that’s about £2 a day if you buy it bottled, or £720 a year, literally down the drain. It’s cheaper to drink tap water, but you may want a water filter. ZeroWater filter jugs start at £29.99, but you can get 20 per cent off all their jugs by using the code JASMINE20 at the checkout at zerowater.co.uk.