Home » World News » How are mRNA vaccines made and how do they work?

How are mRNA vaccines made and how do they work?

The process of building an mRNA vaccine is reasonably simple. One major advantage: the key ingredient, mRNA, is incredibly small and light. It would take less than two kilograms of mRNA to vaccinate all of Australia and to make that just 20 grams of DNA is required.

Scientists begin with a target protein they want the body to produce. In the case of COVID-19, that is a copy of the virus’ spike protein. 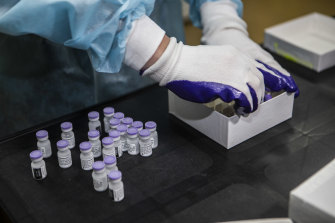 A worker at Monash Medical Centre retrieves vials of the Pfizer vaccine from the freezer on Wednesday.Credit:Meredith O’Shea

Scientists write the genetic code to produce the target protein using the four letters of DNA: G, C, A and T, producing a small double helix strand of DNA about 4000 letters long.

Custom DNA is regularly used in many research projects and can be produced at many factories offshore; scientists often order it and find it at their doorstep in a small vial tucked into an envelope.

The custom DNA is then fed to E. coli bacteria that copy it hundreds of times. There are several Australian facilities that can already do this.

Those copies are then placed inside a stainless steel bioreactor – this can be as small as 50 litres – along with nucleotides, the raw material of mRNA, enzymes and chemicals to control the reaction.

Inside the bioreactor, the enzymes copy the double-stranded DNA again and again into single-stranded mRNA. The mRNA is then filtered out and is ready for the next step of vaccine production.

MRNA itself is extremely fragile, and would be quickly destroyed inside the body. The “secret sauce” of mRNA vaccines is packing the mRNA into tiny balls of fat known as lipid nanoparticles. When these fat balls hit our cells, the cells naturally reach out and pull them inside – where they release the mRNA.

Finding a way to either make or source the lipid nanoparticles is likely to form part of the $50 million investment by the Victorian government.

Perhaps the two largest costs are running the entire manufacturing line under the highly sterile conditions needed for pharmaceutical manufacturing, and filling the vaccine safely into bottles.

One option for fast-tracking a facility is to tap a company that produce sterile “pods” (similar to portable classrooms), which could then be filled with manufacturing equipment.

Filling the vaccine – “fill and finish” as it is known – would likely require a large pharmaceutical manufacturer like CSL.

How do mRNA vaccines work?

DNA contains genes – blueprints for everything a cell can do. MRNA is essentially a sketch of that blueprint, taken from the DNA and sent to the factories in our cells that produce all the proteins that make up our bodies.

MRNA vaccines take advantage of this natural process. By inserting their own mRNA code into human cells, scientists can harness those factories to make their own custom proteins. Even better, mRNA is designed to naturally self-destruct within hours, ensuring the genetic code does not stick around and cause trouble.

Vaccines by Pfizer and Moderna carry mRNA instructions to produce the spike protein SARS-CoV-2 uses to infect human cells. After vaccination, our cells read the instructions and pump out copies of the spike. Our immune system spots them and quickly develops antibodies against them – giving us immunity to COVID-19.

In phase 3 studies, mRNA COVID-19 vaccines have been a spectacular success. Pfizer reported an efficacy of 95 per cent, while Moderna’s vaccine clocked in at 94.1 per cent.

Get our Coronavirus Update newsletter

Stay across the news you need to know related to the pandemic. Get it every Monday.