Home » World News » How a $55,000 baby is helping police train for family violence

How a $55,000 baby is helping police train for family violence

Kirra is simultaneously nursing a crying baby and a bloody nose when the police arrive. Matthew, her partner of three years, has lost his job, his temper and any semblance of self-control.

He is yelling for her to clear off; she is angry and frightened. When the two police arrive Matthew threatens to kick off. “That’s all I need, the f—ing Jacks! Go on … f— off.” 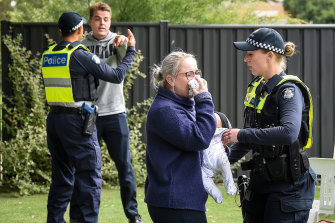 Their eight-month-old baby, Mandy, is crying. Matthew taunts: “You can’t even look after her.” Kirra spits back: “Get a job.” The baby squirms and cries louder.

It is a family violence scene police confront every six minutes – each is different and yet each is the same where someone is at risk, not from a stranger but someone close.

The scene is played out in the garden of a neat suburban house. The lawn is cropped, the paths swept and the garden bed filled with tanbark and healthy shrubs.

Near the fire-pit is an empty bottle of red wine and the discarded packet from a vodka pre-mix six pack. It is out of place in the otherwise neat home. Five chairs around the fire indicate a recent gathering. A bike, tricycle and stroller complete the family setting. A check on the police computer shows no history of family violence.

Experienced police would notice a large garden fork stuck in the ground that could be used as a weapon and an empty dog bed that could indicate a friendly pet or a snapping adversary.

They would see the tall dark external fence could trap them during a violent confrontation and would leave the gate open as an emergency exit. Another danger is a large blind spot in the garden that might conceal an offender, a weapon or a dangerous dog.

But these are not experienced police – they are recruits completing week 25 of their 28-week training course.

And this is not a suburban home – it is the purpose-built family violence simulation centre at the Police Academy – the only one of its type in Australia. 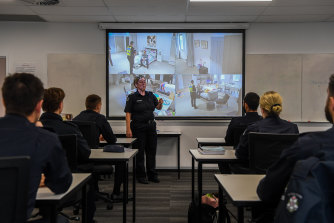 Family violence. Police take lessons from the classroom, here observing a live feed from a simulated house, to the street.Credit:Justin McManus

Kirra and Matthew are serving police playing the role of victim and offender. The eight-month-old baby, Mandy, is a $55,000 “hi-fidelity” wireless mannequin controlled by a hidden computer. Mandy has a heartbeat and can wriggle, cry and hiccup.

Kirra thrusts the baby to the police officer, who takes her – another challenge for the students. Taking the baby helps relieve Kirra’s anxiety and lowers tension but leaves the officer with her arms full and unable to immediately support her partner if Matthew becomes violent.

Inside the house another scenario is played out. A same-sex couple is arguing. They have been together six months and John accuses David of playing up after he has gone out for drinks.

John bombards David with texts demanding he return home. During the subsequent argument John throws a vase, hitting David in the chest.

Both men are relatively calm and co-operate with police. A picture on the wall is at an angle, with a shattered frame; a sign of previous violence or a simple accident? 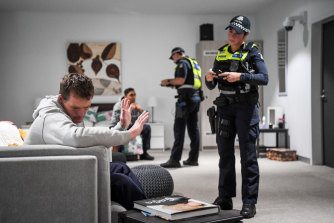 There is a box of cereal on the kitchen bench and a bowl of apples on the table but no food in the fridge. Is it the day before the weekly shop or a form of economic bullying, where one partner controls the money? (A new tactic is to hide all internet password codes, requiring one partner to seek permission for access.)

The students are taught that while dealing with the immediate conflict is the priority, they should also be looking for clues to the bigger picture. Family violence is a crime scene like any other.

John is taken to the police station, where he will most likely be served with a Family Violence Intervention Order. David is concerned, telling police they can work it all out and he doesn’t want any trouble. The police remain firm. They need to act before events escalate. John is told to pack his bag in case the order precludes him coming back. 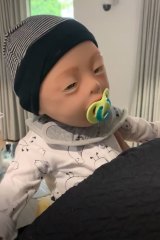 Mandy, the $55,000 baby used during family violence simulations, can cry and has a heartbeat.

In the corridor is a replica police station counter. There a woman arrives to report her partner had attacked and choked her.

Each scenario is planned to challenge the new police: The baby as a surprise addition requires new tactics; the lounge-room argument shows family violence is not only about physical injuries but controlling behaviour; and the walk-in complaint involves choking, a priority one red flag that requires immediate medical intervention.

At the other end of the Academy another class is being taught how to enter a building searching for an armed offender, but the family education will prove more important as, tragically, it will make up the bulk of the recruits’ work.

The centre, opened two years ago this week, provides the first opportunity for young police to practise what they have learned in the classroom, for they will need those skills on a daily basis when they become operational in a few weeks’ time.

The simulation centre manager, Tracey Nichols, says 60 per cent of police callouts are family violence: “In some places it can be as high as 80 per cent.”

In the last calendar year there were 92,000 family violence offences – an increase of 10 per cent.

Assistant Commissioner Lauren Callaway of Family Violence Command says while most areas of crime decreased during the pandemic, family violence continued to rise. Areas that jumped were harassment offences, breaches of intervention orders and incidents involving juveniles, both as victims and offenders.

Family violence reports to police where the perpetrator is aged under 18 years have increased by 15 per cent, from 5746 to 6612 incidents.

Callaway says that in many cases lockdown and remote learning created tension between adolescents and parents. The increase in reports is also due to both police and the public understanding that family violence doesn’t just involve serious assault but controlling behaviour, harassment, financial punishment and verbal derision.

“I hope there has been a jump in reporting because people now know we treat these incidents very seriously.”

Callaway vividly remembers her first call to a family violence incident 26 years ago in Ballarat, where she was stationed as a brand new constable. While her senior partner talked with the female victim at the front door, her attention was on a couple of little children in the background.

“I felt a touch on my hand and leg. It was a little toddler who had come out from behind her mother. I thought, ‘What has gone here that would make a tiny child feel the need to stand with a stranger to feel safe?’.”

The victim said the offender had left and all was under control. Satisfied, the senior police officer closed his notebook, the door and th e case. There was no complaint recorded.

Back then such incidents were marked down as “Verbal Dispute Only” and not recorded as an offence.

Callaway says the simulation centre is vital to teach young police how to deal with being the first in attendance at such incidents. Simulation exercises can be streamed live into police stations around the state as a teaching aid. 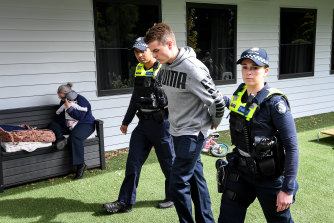 The police response to family violence used to be down to gut feel. The police at the scene decided what was required, which meant there was an uneven response. The attitude of many police was that the longer spent dealing with a “domestic” the less time was spent on “real crime”. Jobs could back up and the supervisors would be cross if the van was off the road for hours.

As a result, police with Swinburne University developed a 39-question checklist to provide an objective risk assessment. These include previous threats, history of violence, mental illnesses, loss of employment, recent or planned separation, threats to harm pets, recent pregnancy and children exposed to harm.

A score of just four points results in immediate referral to specialist investigators. Nichols says certain triggers, such as choking, mean an automatic override and a high priority: “Choking is often an indicator of potential homicide.”

The realistic baby Mandy is vital, says Callaway, as children are present in 36 per cent of incidents. Police from New Zealand, South Australia and Queensland will soon visit the centre to see what they can learn. “It is state of the art,” she says.

The next actors will be employed to play victims and offenders. They will play the roles of disabled, elderly, culturally diverse and LGBTI members of the public – deemed “priority communities”.

Each script will have alternative responses depending on the nature of the police intervention.

There are now 340 specialist family violence investigators in Victoria. These police face their own stresses, which is why there is a Specialist Investigators Support Unit where psychologists counsel Sexual Offences and Child Abuse investigation teams and Family Violence Investigation Units.

Experienced detectives who have moved into the area have been shocked at the severity of some of the cases, where offenders use tracking devices and security equipment to try to control partners and ex-partners.

“Pound for pound they are the most dangerous offenders we have to deal with,” one said.