Victoria’s hotel quarantine agency will review the police checks of its workforce after a “narcissistic” convicted perjurer was hired to work in a quarantine hotel.

Nelly Yoa, a serial self-promoter who was this week convicted of assault, trained to be a floor monitor in Victoria’s quarantine program in December but did not end up working a shift. 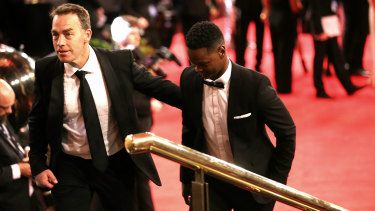 The 32-year-old, who has previously been found guilty of perjury and making a false statement to police, has had fleeting periods of internet fame, including when he posed with AFL chief executive Gillon McLachlan and other football identities after sneaking into the Brownlow Medal ceremony in 2018.

The state opposition on Wednesday questioned how a person with Mr Yoa’s record could be employed by the government. Danny Pearson, the acting minister in charge of hotel quarantine, said he received advice Mr Yoa had “failed to disclose previous offences and convictions”.

Mr Pearson said an audit would be conducted to ensure no staff working in the program were yet to receive police checks, which can take about six weeks to process.

“Significant criminal history precludes a person from being employed by [COVID-19 Quarantine Victoria],” he said.

“CQV have informed me that a show cause notice will be provided to this particular individual and the resolution of that matter is underway.”

Mr Yoa was training as a resident support officer, a role that involves escorting guests to rooms and delivering them items.

He has consistently made false or unproven claims about his life and achievements, including that he trialled with top English football club Chelsea and that sprinter Usain Bolt attended his child’s birth.

Mr Yoa rose to prominence in 2016 and appeared on the front page of The Age when he became a prominent voice in the debate over the rate of crime among young Victorians with a South Sudanese background. However, South Sudanese community leaders said he vastly overstated his influence.

The Ballarat-based man was attacked with a machete in 2011.

During 2018 he attended meetings with leaders, including Premier Daniel Andrews. Mr Yoa re-uses old photographs with these prominent individuals to claim he still has contact with them. Last year he posted a years-old photo with Mr Andrews to claim he had met the Premier to discuss the pandemic and “exchange ideas to better our state of Victoria”.

Sentencing Mr Yoa for faking an incident in which he claimed a woman threatened him with a knife, a magistrate told him in 2019: “[Your] preoccupation with your reputation and public image are a confabulation of a narcissistic individual … aimed at protecting any constructed public image”.

COVID-19 Quarantine Victoria has run the state’s hotel scheme since it relaunched in December after flights paused for months during Victoria’s second wave, which was sparked by virus leakages from hotels.

Doctors, nurses and other staff have been working across multiple hotels and other offices, in breach of a key recommendation of the hotel quarantine inquiry designed to reduce the risk of infection.