The Murray remains the deadliest river in Australia, claiming the lives of about two Victorians on average each year, with another drowning this week prompting renewed warnings about the waterway’s lethal hazards.

A 35-year-old man became the latest drowning victim on Tuesday after running into difficulty while swimming near the northern Victorian town of Cobram, at the border with NSW. 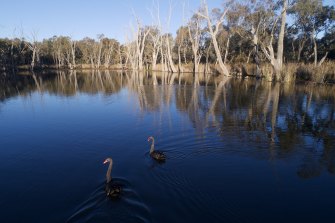 The Murray is the most deadly river for swimming in Australia. Credit:Nick Moir

NSW Police said the man’s body was found about four metres underwater at about 8.40pm by Victorian police divers. He was declared dead at the scene.

“At the time the man disappeared, there was a moderate current flowing to the west,” the police statement said. Officers are investigating the circumstances of the drowning.

Victoria has experienced its most deadly six-month period on record for drownings, with 43 people dying in the water since July last year, including eight in the past fortnight.

“[Rivers] might look beautiful and flat on the surface but often we can’t see what’s underneath,” she said.

Men accounted for the vast majority of drownings – 92 per cent – on the Murray River in the 10 years to June 30 last year.

Ms Pidgeon said trees and snags concealed beneath the water and sudden changes in depth were some of the major hazards in rivers.

Earlier this month Royal Life Saving Australia released a statement citing research showing the risk of drowning doubled on public holidays and that alcohol was a major risk factor.

Sites at Mildura and Echuca are among the most dangerous areas on the Murray.

“You can check the direction of the current by throwing a leaf into the water to see the speed it travels and we also advise entering the water slowly and feet first,” he said. “If you are caught in a current, stay calm, float on your back, feet first, and go with the current.”

Life Saving Victoria has confirmed its own studies show only about 45 per cent of people observe signs near water warning of dangers including ocean rips, submerged rocks and dangerous sea life.

River ecologist Ben Gawne, who specialises in the Murray, said conditions there could change very quickly without warning. “People are forever underestimating the force of the water,” he said.

Dr Gawne said the water often moved as fast as 70 centimetres per second.

“But in small pockets the current can be more than double that. When you get swept into something like that, there is no resisting. It’s pushing against your whole body.”