Home » World News » He saved the euro, now Draghi is charged with saving Italy, if not Europe

He saved the euro, now Draghi is charged with saving Italy, if not Europe

Rome: Mario Draghi, a giant of Europe largely credited with saving the euro, has accepted the Italian President’s bid to form a new government, announcing a cabinet of experts mixed with experienced political hands, at once seeking to reassure financial markets and tame a potentially unruly coalition of former rivals.

The former European Central Bank chief, who is expected to easily surpass the formalities of confidence votes in Parliament next week, will be tasked with guiding Italy through a devastating and unpredictable pandemic.

But he also must secure its future by wisely and efficiently spending a once-in-a-generation relief package financed by debt raised for the first time collectively by all European Union countries. If he succeeds, he could set a precedent. If he fails, the EU will be less likely to approve such a package again. 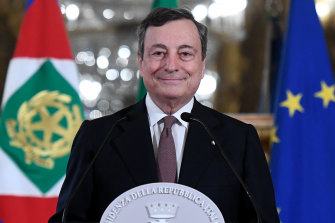 Draghi arrives as prime minister in a position of rare clout in Italian politics.

A recognised statesman in Europe, he had the opposite problem of his predecessors who struggled to cobble together support to form a government. Draghi spent weeks trying to find room on his bandwagon for an ideological hodgepodge of political parties.

Pro-Europe liberals and former communists joined far-right populists who had stunningly changed their tune, anti-establishment forces desperate to be part of his establishment and a free-market media mogul who hailed the return of normalcy.

“I will read the composition of the government,” Draghi said on Friday night in a terse statement that contrasted with the verbosity of his predecessor and underlined his strictly business reputation and the urgency of his mandate.

In a previous visit to the President’s Quirinal Palace, Draghi talked about the “extraordinary resources of the European Union” and the chance those resources gave Italy’s future. On Friday night, he simply read a list of cabinet members that consisted mostly of politicians and a few key technocrats. And he left.

Draghi’s varied support could cause internecine spats down the road. But MPs said the need to spend lots of cash very fast could also lead to meaningful reforms in the country’s investment-repellent bureaucracy and glacial judicial system.

Those stakes are high enough. But experts, politicians and EU officials say the future of the bloc as a more integrated fiscal union is also riding on Draghi’s success in managing the hundreds of billions of euros from Brussels. They think they are in good hands.

“The fact that Draghi will lead the country in this particular moment was very, very big news here,” Paolo Gentiloni, the European Union’s economy commissioner and a former Italian prime minister, said from Brussels. “And very, very good news.”

He said Draghi’s arrival after the collapse of the Italian government reassured European leaders, especially because of his reputation for “caring about execution”.

Others said Draghi’s status as a proven senior statesman was critical, with the union on the cusp of a potential leadership vacuum. Britain has left, Chancellor Angela Merkel of Germany is set to step down, and President Emmanuel Macron of France is facing tough elections.

For avid supporters of a more robust EU and Italy’s leadership in it, Draghi’s arrival comes just in time.

Last year, Merkel and Macron overcame entrenched opposition to win approval of a €750 billion ($1.1 trillion) stimulus agreement to save the economies of member states walloped by the coronavirus. Supporters of an ever-closer EU, who dream of debt and asset-sharing similar to that of the United States, considered the fund a major step. 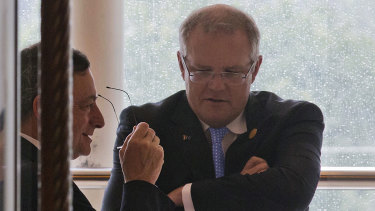 Then president of the European Central Bank, Mario Draghi, left, and Prime Minister Scott Morrison, then treasurer, chat during the G20 Finance Ministers meeting in Chengdu, China, in 2016.Credit:AP

For the first time, countries raised money by collectively selling bonds on the open market and then distributing much of the money as grants, rather than loans, that do not have to be repaid to other countries in the union. This marked a critical departure from bloc rules to keep national debts in check.

Italy received the largest share, roughly €209 billion, of a pot likened to a modern-day Marshall Plan. This time, the plan is to invest in digital competitiveness, education, the green economy and big public works projects.

But the windfall has also triggered consternation. Northern European countries already resistant to the idea of their taxpayers carrying the burden of the debt-laden European south are worried about Rome’s ability to absorb and effectively spend the money. After saving the euro by pledging to sure it up, introducing a massive bond-buying program, and testing the limits of the European Central Bank’s scope in 2012, Draghi now has to safeguard the dream of an ever closer, and more fiscally integrated, union.

“If this succeeds this is a pillar for a European success,” said Gentiloni, who said that while the relief fund was conceived as a one-off operation in an extraordinary year, the history of the union has shown that it sticks with what works. “It could be a precedent.” 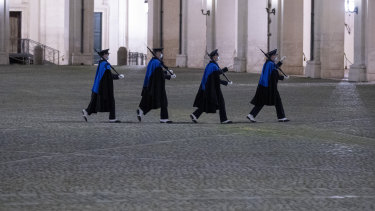 Soldiers march in the courtyard of the Quirinale presidential palace prior to the arrival of Mario Draghi, in Rome, on Friday.Credit:AP

Others put Draghi’s task, and its bearing on Europe’s future, in even more historic terms, referring to Alexander Hamilton in the United States.

“If it’s a success, this will ignite essentially a Hamiltonian process,” said Nathalie Tocci, director of Italy’s Institute of International Affairs and an adviser to the European Union’s foreign policy chief. “If it’s a failure,” she said, it would amount to “a nail in the coffin in those who believe in a fiscal union.”

Typically understated, Gentiloni agreed, saying failure would make it “for a few years very, very difficult to relaunch this idea.”

Doubts about the ability of the previous government, led by Giuseppe Conte, to effectively spend the money led to the collapse of his government more than any other factor. After Conte’s failed attempt to form a new coalition, President Sergio Mattarella summoned Draghi to put together a government.

Draghi’s credibility from his leadership of the European Central Bank during the debt crisis, his deep professional connections to top players on the European stage and his granular understanding of Italy’s economy uniquely prepared him for this moment.

His gravity has proved to be a nearly irresistible

influence on warring political parties that want a role in spending Europe’s billions and a share in his potential success.

Matteo Salvini, Italy’s leading nationalist, who once wore “Enough Euro” T-shirts, has moderated to please his pro-business base and get a spot in the government of a banker who is the Italian personification of the euro.

The anti-establishment 5-Star Movement, whose founder campaigned to leave the euro, has essentially split apart, with the majority backing Draghi and hoping to rebrand themselves as a small green party. They spent years calling Prime Minister Silvio Berlusconi a “psycho dwarf,” but will now be in the same government as his supporters. So will the center-left Democratic Party, which has been mocked for years by all of the above.

Lawmakers expressed hope that the broad support could allow Draghi to enact emergency legislation to clear administrative hurdles — and a baroque bureaucracy — that have slowed Italy for decades. For example, there is a hope among many that Draghi will be able to address the slow pace of the Italian judiciary, as international investors often steer clear to avoid frivolous lawsuits that can freeze business for years.

“I’m sure that Draghi is well equipped, is experienced, to address these famous bottlenecks,” said Gentiloni, who also cautioned, “We should not raise expectations that these can be solved in a sudden breakthrough.”

According to the bloc’s rules, Italy must submit its plan for spending the relief package by the end of April. Some lawmakers have worried that a delay will put Italy behind other countries and postpone money entering the system until the northern fall.

Gentiloni said he saw no reason Italy would be late and expressed confidence in Draghi’s ability to get things done. That would matter not only for Italy but for Europe, too.

“Not only short term,” he said. “But also in the long term.”