‘He can’t breathe’: The troubled life and tragic death of Danny Richards 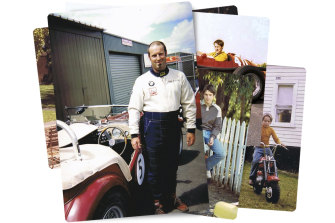 Eileen Richards often thinks about the moment she told her son Danny that psychiatric services were on their way to their Glen Waverley home.

“He cried out like a wounded animal when I told him, as if he was saying ‘Oh no, Mum, why have you done that’?” she says.

It was June 24, 2019, and her 48-year-old son had been increasingly delusional but never violent, fearing the authorities were tracing his every move.

Everything that night seemed to precipitate disaster, Mrs Richards recalls, and when four police officers in uniform and a mental health clinician marched down her narrow, red-brick garden path and into her home just after 8.30pm, she felt particularly uneasy.

“The hardest thing you could do as a mother is to commit a child or to bury him,” Mrs Richards said. “As it turned out, I had to do both.”

The family kitchen bears the marks of what happened in the next 15 minutes. There are grooves in the wooden bench carved by Danny Richards’ belt buckle as he was forcefully bent forward then dragged to the floor.

Lying on the cork flooring, one witness says Mr Richards called out to officers: “I can’t breathe.”

State Coroner John Cain’s inquest into Mr Richards’ death in custody has allowed The Age to piece together his final moments, who was in charge of the 48-year-old’s welfare and how he came to die in the hands of those called to help. 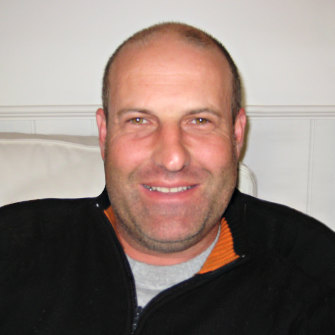 “Danny lived a compassionate life; in his dying moments he was shown no mercy,” Mrs Richards says.

As a young boy, his fascination for tinkering with classic cars saw him travel the world.

As he grew to nearly 180 centimetres tall, the St Kevin’s College graduate and aspiring horticulturist would often be seen clambering into his favourite red 1949 MG-TC to cruise around the streets of Melbourne on a Sunday. 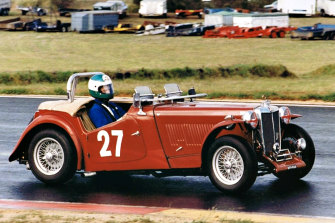 “We used to go to car rallies, and when Danny was about 6 or 7, we went all around Victoria jammed in this little Austin 7. My husband Murray was like my sons – he was quite a large, tall man too, so we’d all just emerge from this car,” Mrs Richards says with a smile.

“The love of English sports cars was in Danny’s genes.”

As he grew older, Mr Richards spent time working in Sydney as a private agent for clients including businessman Joseph Gutnick and his family, where he was trained in counter-terrorism, crowd management, bomb detection and surveillance.

When he wasn’t working, his family recall Mr Richards being enthralled with world politics, becoming an avid human rights campaigner in his later years, penning letters to anyone he thought could bring an end to the injustices he saw.

“My father was in the Middle East during the war, and Danny had a real feeling for the plight of the oppressed communities. Whenever anything came on the radio or the television he’d say ‘Mum, guess what happened today’, he was really interested in those sorts of human rights issues,” Mrs Richards says.

“I spent 40 years working with World Vision and used to share so much with him. Not only was he my son but he was my friend.” 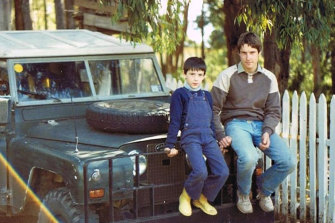 But in his late 30s Mr Richards’ mental health began to deteriorate following the breakdown of a long relationship. By 2011 his symptoms had led to a number of brief stints in psychiatric care to treat a diagnosis of delusional disorder.

Mr Richards though, didn’t believe he was unwell.

In the hours before his death, the 48-year-old spent the morning helping paint the family home with friend Vince Smethurst.

They were close and Mr Richards spoke openly about his belief that he was being monitored by law enforcement agencies including the FBI, even installing CCTV cameras outside the family home and padlocks on the gates to – in his mind – safeguard his family.

It wasn’t the first time he had confided in Mr Smethurst about his fears.

“Danny’s paranoia would come in waves. During the bad times he thought the air force or FBI were after him. I remember one time a guy walked his little poodle at the front of my house and he thought it was an undercover police officer,” Mr Smethurst told investigators.

“Danny would carry two law books everywhere and studied them to a point that if there was an incident he would be prepared to respond. Then a week later he would be fine.” 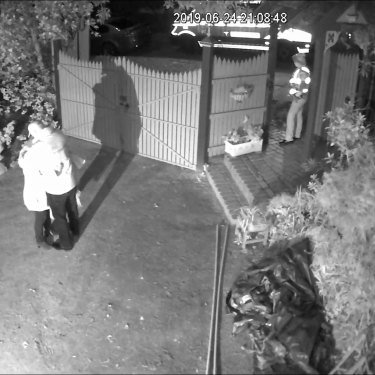 Soon after, he reached a clinician at the Eastern Hospital’s Crisis Assessment and Treatment team and felt that after six months of trying, someone finally grasped his concerns.

So as not to jeopardise their close friendship, he sketched out a handwritten letter for Mr Richards’ mother, advising her to call and set up a time for the CAT team to come and assess Mr Richards at home.

“It was the first time after more than a year that someone actually was listening to us. I told her about the alarms everywhere in the family home, Danny writing letters … the padlocks on the car. She was fantastic. I remember her saying ‘If this sounds bad to us, imagine what’s going on in his mind’,” Mr Smethurst told investigators.

Mrs Richards followed Mr Smethurst’s instructions, dialling the CAT team and was told a dispatch crew would be booked to attend the following day.

But nurse practitioner Gareth Jones and social worker Wayne Conron arrived within an hour as the evening was unusually quiet.

“Every referral we get we want to do as soon as we possibly can. So we were quite proud of the fact that we were going to see Danny very quickly,” Mr Conron told the inquest.

“Most of the time the CAT team is absolutely flat out. On that particular night … we didn’t have anything to do.”

As the team pulled up down the road at 7.20pm under the cover of darkness, the two men phoned triple-0 and requested police and paramedics to attend and assist, finding the front gates to the home were padlocked shut.

ESTA operator: “Is he on a treatment order, is he?

Mr Jones: “If we see him and assess him he’s likely to be, yes. His name is Daniel. He has a delusional disorder. And he’s currently acutely psychotic.”

Police – from Glen Waverley and Clayton – and paramedics arrived about 8.30pm and mingled in the quiet street. No one had laid eyes on Mr Richards, but the coroner heard all three services anticipated the 48-year-old would be issued with an involuntary hospital order.

Then the police – Mr Richards’ worst fear – headed down the narrow garden path and into the home ahead of the clinicians. At 8.36pm it was Danny Richards who reached for a kitchen landline to call triple-0.

“What’s the problem there? Why are you not going with them?” replied the operator, Acting Sergeant Emma Rosevear. “You’re making this very difficult.”

The CAT team and police say Mr Richards appeared incoherent inside the home and refused to go willingly with them to the ambulance outside.

An involuntary patient assessment order was signed and police were given the green light to use reasonable force.

But Mr Richards didn’t want to go and for more than six minutes he struggled with police in an attempt to break free; one officer repeatedly kicked out his legs while two others pulled at his arms. Another officer sprayed him twice with capsicum spray.

About 8.50pm, Mr Richards lost consciousness on the kitchen floor while restrained and handcuffed.

Officers told the coroner they jumped off Mr Richards once he turned blue.

A panicked sergeant can be heard on D24 radio calling for backup as he runs outside to waiting paramedics shouting “he’s stopped breathing”.

Despite police and paramedics attempting to revive Mr Richards for nearly 50 minutes, he died at the scene. Pathologists gave the cause of death as underlying cardiovascular disease complicated by restraint.

When asked whether, in hindsight, sending in four fully armed police officers ahead of a CAT team may have sabotaged the intervention, Mr Jones replied: “On reflection, yes.

“[But] I don’t think we could have done anything any different in this situation.”

No footage of the tussle with police was captured – Victoria Police had yet to issue body-worn cameras to officers working out of Glen Waverley and Clayton stations.

Whether police and attending clinicians acted appropriately, whether the intervention was adequately planned and how we deal with people who have mental illness are now being considered by Mr Cain, following a six-day inquest into Mr Richards’ death. 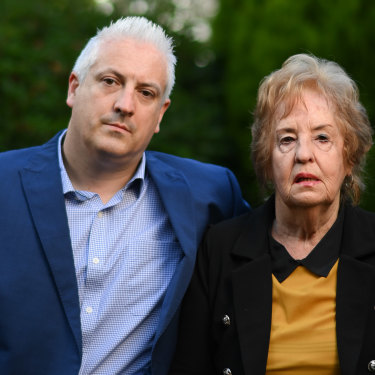 Eileen Richards and Robert Richards, mother and brother of Danny, he died while being restrained by police and the coroner is currently investigating. Credit:Eddie Jim

The manner in which Mr Richards died has left his family asking many questions about our justice and law enforcement and how the state deals with the mentally unwell.

Some answers may already be on the table thanks to the recent Royal Commission into Victoria’s Mental Health System.

In early March commissioners handed down 65 recommendations, including rewriting the Mental Health Act so where possible having health professionals respond to people experiencing crises rather than police.

They also called for restrictive practices and compulsory treatment to be reduced. 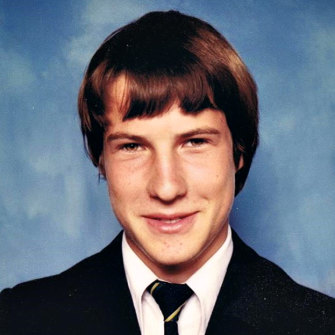 Commission chair Penny Armytage said the existing system had “catastrophically failed to live up to expectations”, with the system so overwhelmed it could not keep up with the number of people seeking treatment.

This year alone, about one in five Victorians are expected to experience a mental health problem.

Associate Professor Ilan Rauchberger, director of The Alfred’s psychiatric services, told the inquest into Mr Richards’ death that in the past two years his hospital has removed security from their wards after finding it was striking the wrong balance.

Now, he said, mental health ward staff lead decision-making on patient welfare, leading to a significant reduction in staff assaults and the need for restraints.

“[Feedback] suggested that it can be traumatic and distressing having security walk into the room in almost a show of force,” Professor Rauchberger told the inquest. “It’s essentially changed the culture on the ward.”

On the other side of the world, less than a year after Mr Richards died, the death of Minneapolis man George Floyd, who yelled “I can’t breathe” more than 20 times while being held down by police, sparked global outrage and protests about police brutality in the African-American community.

Footage of the restraint captured a police officer kneeling on Floyd’s neck for more than seven minutes while he was pinned to the ground. 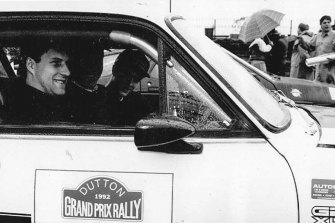 Danny had a love of classic cars.

Back in Melbourne, the Richards family hope the inquest will lead to real change to a “broken system” they say killed their Danny.

“Never could I have realised that within half an hour of returning home, Danny would be dead, and that’s something I’ll have to carry to my grave,” Mrs Richards says.

Mr Cain is expected to hand down his coronial findings later this year.