Hawaii Proud Boys leader Nick Ochs is expected to appear in federal court in Honolulu on Monday after flying back from Washington, D.C., where he allegedly stormed the U.S. Capitol with a crowd of pro-Trump demonstrators, interrupting the official Electoral College certification.

Nicholas “Nick” R. Ochs, a resident of Hawaii, has been charged with one count of unlawful entry into restricted buildings or grounds. He is the leader of the Hawaii chapter of the Proud Boys organization and has the words “PROUD BOY” tattooed on his right forearm, according to court documents. He was arrested at Daniel K. Inouye International Airport in Hawaii on Thursday.

At 4:13 p.m. on Jan. 6, Ochs shared a selfie appearing to smoke a cigarette with another man inside the Capitol. The photo was captioned “Hello from the Capital lol” and was shared by @OchsforHawaii.

Ochs later admitted to a CNN reporter that he entered the Capitol, and CNN published a photograph that appears to depict Ochs in the crowd walking through the Capitol halls, according to the criminal complaint filed in the U.S. District Court for the District of Columbia.

“We didn’t have to break in, I just walked in and filmed,” Ochs told CNN.

However, investigators noted some rioters pushed over barricades and shoved police officers out of the way to enter the Capitol, while others scaled walls and broke windows.

“There were thousands of people in there – they had no control of the situation. I didn’t get stopped or questioned,” Ochs also told CNN once inside the building, claiming that he was working as a “professional journalist” and did not enter any offices or chambers.

Ochs is expected to appear before Mag. Judge Wes Reber Porter on Monday. He will likely be extradited back to D.C. for trial.

FBI Special Agent Roger R. Dean identified Ochs in photographs taken Jan. 6 inside the Capitol not only from context, but also from comparing the image to photographs of Ochs from his 2020 bid for election to the Hawaii State Legislature, according to the criminal complaint.

Ochs ran for election to be the Republican representative for Hawaii House District 22. He was defeated by 28-year-old Democrat Adrian Tam, who carried 63% of the vote, KITV reported.

The Proud Boys have been vocal since the 2020 presidential election in calling for action “over the false claim that President Trump lost the election due to widespread voter fraud,” Dean wrote in the complaint.

“Some members have advocated for violent action to achieve these ends. Self-identified members of the Proud Boys descended on Washington, D.C. earlier this week, as part of activities planned to protest the certification of the 2020 U.S. Presidential Election results,” Dean continued. 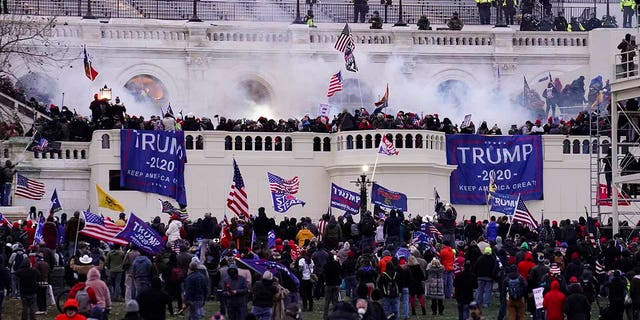 Another Proud Boys leader, Henry “Enrique” Tarrio, who lives in Miami, was arrested in Washington, D.C. two days prior to the Capitol Hill riot. He was charged over allegedly burning a Black Lives Matter banner outside a historic Black church in December during demonstrations in the nation’s capital, where pro-Trump supporters and Proud Boys clashed with local activists and Antifa.

Tarrio was banned from the District of Columbia Tuesday.

On Nov. 16, 2020, Och posted to social media site Parler, sharing a tweet by President Trump declaring “I WON THE ELECTION.”

According to the complaint, Och stated, “Show this tweet to the leftists and say they won’t do sh** when he just keeps being president. Don’t say it was stolen or rigged. Just say we’re doing it and they won’t fight back. They are getting scared, and they don’t function when they’re scared.”

Parler went offline Monday after Amazon booted it from its servers. Apple and Google had already removed the app from their perspective stores over concerns about messages inciting further violence after the riot on Capitol Hill.

At least five people, including a U.S. Capitol police officer, died as a consequence of the riot. A protester, who was a U.S. Air Force veteran, was fatally shot by police inside the Capitol building.

The FBI confirmed to Fox News Monday that it has received over 40,000 digital media tips, including video and photos, from the public, which will be used to help identify additional suspects.

Related posts:
‘The Lincoln Lawyer’ Drama From David E. Kelley Lands Netflix Series Order; Manuel Garcia-Rulfo To Star
CBS Television Distribution Rebrands as CBS Media Ventures
Popular News
Why Brown Is This Season’s Hottest Color
25/01/2021
Man Utd wonderkid Ramon Calliste, called ‘the next Giggs’, now owns luxury watch business and makes £5m a year – The Sun
26/03/2020
Megan Thee Stallion Addresses Criticism Over Twerking: ‘I Love to Shake My A**’
26/03/2020
Police guard shops to stop coronavirus panic-buyers and enforce social distancing – The Sun
26/03/2020
Coronavirus: Good Morning Britain’s Dr Hilary reveals ‘game-changing’ self-testing kit
26/03/2020
Recent Posts
This website uses cookies to improve your user experience and to provide you with advertisements that are relevant to your interests. By continuing to browse the site you are agreeing to our use of cookies.Ok