Government is considering testing SEWAGE for signs of coronavirus

The Government is considering testing sewage to track the size of the coronavirus outbreak in Britain, it has been revealed.

Defra confirmed it is conferring with scientists about whether wastewater can help trace the spread of the deadly infection.

It could become part of the government’s next phase of the COVID-19 battle plan to test, track and trace the virus as Britain eases lockdown.

Researchers in other European countries have already resorted to looking at sewage to monitor the spread of the virus, called SARS-CoV-2.

Findings from studies in Switzerland, France and the Netherlands suggest fragments of the virus are shed by infected people in their faeces and urine.

Wastewater ‘reflects what is excreted by the public within a few hours’, according to Swiss scientists who looked for viral fragments in sewage.

It could potentially offer health officials an early warning system for future COVID-19 waves before individuals even show symptoms.

Even if someone is infected with the virus, it can take between five and 11 days for the characteristic symptoms of fever and a persistent cough to show.

Newcastle University researchers revealed they have begun gathering data about coronavirus from sewage in England on April 23. 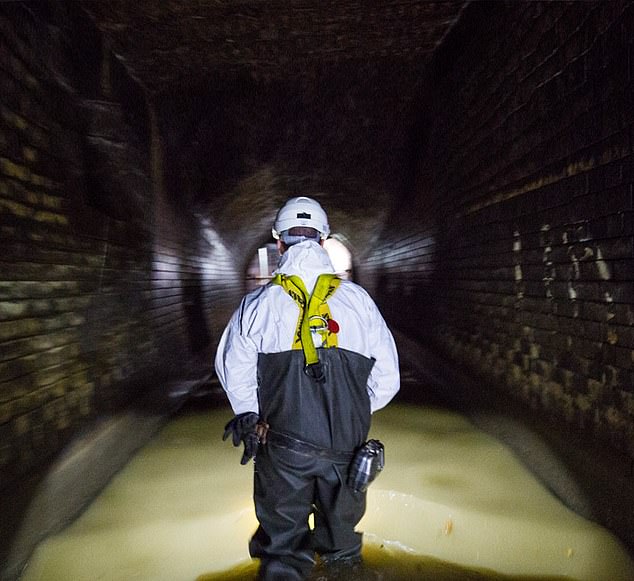 The Government is considering testing sewage for the presence of the coronavirus. The method could offers a potential early warning system for waves of infections before individuals even show symptoms. Pictured: Sewer technician in London in 2016 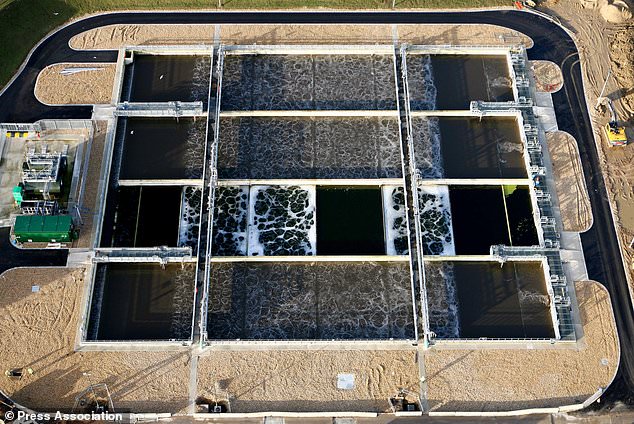 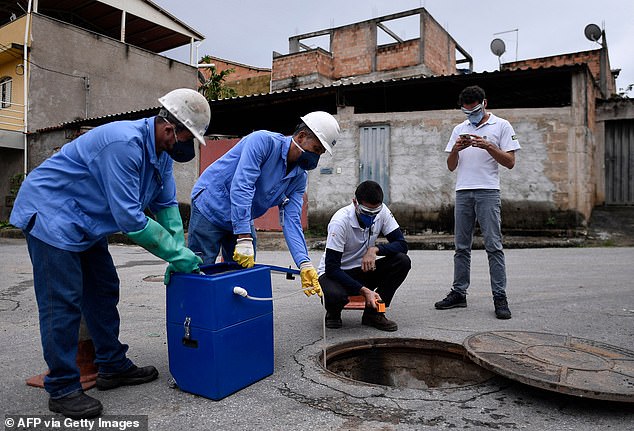 Sewage epidemiology has already been started up around the world to address the COVID-19 pandemic. Researchers from Brazil’s National Institute of Science and Technology and Minas Gerais sanitation employees have collected sewage samples to try to detect the coronavirus

Monitoring the virus through sewage is known as wastewater-based epidemiology (WBE), and is already known to provide vital clues about the population’s health.

The virus doesn’t readily spread through waste water systems so scientists cannot catch it from samples.

A spokesperson for the Department for Environment, Food and Rural Affairs (Defra) confirmed to POLITICO that the Government is looking into the science behind it.

A statement given to MailOnline said: ‘We are actively engaging with the research community and government scientific advisers to investigate whether monitoring waste water could be used as a way of tracking the prevalence of the virus.

‘The WHO is clear there is currently no evidence coronavirus has been transmitted via sewerage systems.’

With the UK now past the peak of the first wave of the COVID-19 outbreak, attention is increasingly focused on how to prevent multiple waves.

The Government’s ‘test, track and trace’ strategy will his will help to isolate anyone possibly infected by the virus, and stop the spread.

But sewage water could act as a complementary early-warning system for new outbreaks.

It could be particularly useful as countries cautiously emerge from lockdowns knowing a resurge of infections is possible.

A similar approach is being considered in the US – a spokesperson for the Centers for Disease Control told POLITICO last week the agency is ‘exploring the potential for waste water testing to inform the response.’

Sewage epidemiology has already been started up around the world to address the COVID-19 pandemic.

Researchers in Switzerland have been able to detect the new coronavirus at very low concentrations in wastewater as early as February, when the first cases of infection were recorded in the country.

‘We didn’t expect that we’d already be able to measure a signal in wastewater from Lugano, with only one, and from Zurich, with only six known cases,’ Tamar Kohn from the research institute EPFL, in Lausanne, said in a news release.

‘Wastewater doesn’t lie, and it reflects what is excreted by the public within a few hours,’ team leader Christoph Ort from the Swiss Federal Institute of Aquatic Science and Technology said in a statement. 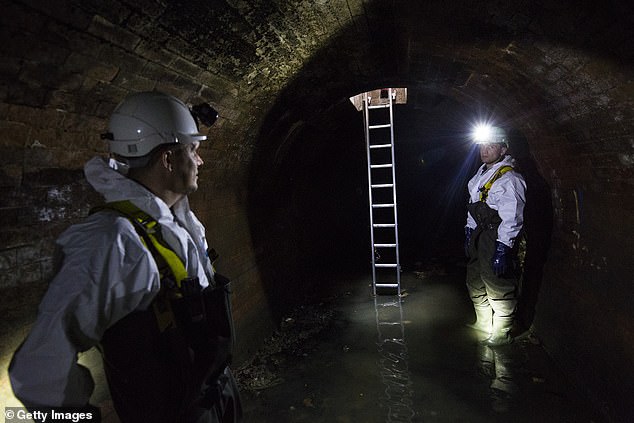 The Government’s ‘test, track and trace’ strategy will his will help to isolate anyone possibly infected by the virus. But sewage water could act as a complementary early-warning system for new outbreaks. Pictured: Sewer technicians at the Northern Outfall Sewer at Wick Lane depot on May 25, 2016

WHERE HAS SEWAGE BEEN TESTED FOR THE CORONAVIRUS?

Researchers in Switzerland have been able to detect the new coronavirus at very low concentrations in wastewater.

Scientists from the Federal Institutes of Technology in Zurich (ETH) and Lausanne (EPFL) analysed wastewater samples from Lausanne, Zurich and Lugano and revealed their early findings in a news release.

The researchers managed to detect the novel coronavirus in all samples, with concentrations in more recent samples so high that analysis appeared relatively easy.

They even confirmed the virus, at very low levels, in samples dated back to February, when the first cases of infection were recorded in Switzerland.

Researchers from the Netherlands studied sewage samples from seven cities to look for evidence of COVID-19 in waste water, publishing their findings on medRxiv at the end of March.

They found that even when there were few people with reported cases of the deadly coronavirus in the country, traces of it were still present in the sewers.

In their non-peer reviewed paper, the KWR Water Research Institute team said sewage could provide an early warning or tracking system as remnants of the virus are passed into the system from human waste.

All raw wastewater samples scored positive for SARS-CoV2 and six of eight samples from treated wastewater.

The team compared the average level of SARS-CoV2 genomes in wastewater with the number of COVID-19 deaths in Paris area and in France.

‘As expected, we confirmed that the increase of genome units in raw wastewaters accurately followed the increase in the number of fatal cases observed at the regional and national level,’ the scientists wrote in the non-peer reviewed study, published on medRxiv.

‘Therefore, our study demonstrates that the contamination of wastewater and the detection of viral genome occurred before the beginning of the exponential growth of the epidemic.’

Researchers from the Netherlands also alerted that sewage could provide an early warning or tracking system of SARS-CoV-2, as remnants of the virus are passed into the system from human waste.

They found that even when there were few people with reported cases of the deadly coronavirus in the country, traces of it were still present in the sewers.

‘The detection of the virus in sewage, even when the Covid-19 prevalence is low, indicates that sewage surveillance could be a sensitive tool to monitor the circulation of the virus in the population,’ researchers wrote at the end of March in a non-reviewed paper.

Researchers from the Sorbonne University and Eau de Paris also concluded that monitoring of waste water ‘may provide an alternative and possibly early tool to detect pathogens in populations when investigations in humans is difficult for logistic, ethical or economic reasons’.

Should the system work, sewage samples could let public health officials see a resurgence of COVID-19 infections earlier than with diagnostic tests – perhaps by around a week, the Swiss team believe.

But the surveillance method would need improvements before it can be used to map where outbreaks of the virus are.

Australian researchers said in April they are working on a new sewage test that could soon help identify coronavirus hotspots.

Researchers from The University of Queensland and the CSIRO are developing the test, which finds genetic traces of the illness in raw sewage.

The scientists successfully detected SARS-CoV2 – the virus that leads to the disease COVID-19 – in untreated sewage from two plants in southeast Queensland.

‘I see it as an important surveillance tool for easing restrictions,’ Mr Bertsch told Reuters. ‘As governments ease up, they will need to keep monitoring and respond to outbreaks.’

It emerged in April that early sewage work was being conducted in parts of England to try track the spread of the virus.

Scientists from Newcastle University are working with Spanish academics in Santiago de Compostela who will also monitor sewage in their local networks.

The work, supported by Northumbrian Water and Labaqua in Spain, will allow the team to estimate the prevalence of COVID-19 in different areas.

Professor of ecosystems engineering, David Graham, who is co-leader of the project, said: ‘Without the capacity to test each person individually, particularly people without symptoms, we have limited information about how widespread the virus is or whether it is affecting some communities more than others.’

Researchers from Brazil’s National Institute of Science and Technology and Minas Gerais sanitation employees have also collected sewage samples to try to detect the coronavirus.

Cases of the virus have topped 3.5million while deaths are nearing 252,000.

Related posts:
Pregnant Katy Perry shares risque maternity corset featuring cone bra she had planned to wear to canceled Met Gala – The Sun
Meghan Markle and Prince Harry: Their Relationship in Photos
Popular News
Maradona is laid to rest after thousands of fans lined streets
27/11/2020
Man Utd wonderkid Ramon Calliste, called ‘the next Giggs’, now owns luxury watch business and makes £5m a year – The Sun
26/03/2020
Megan Thee Stallion Addresses Criticism Over Twerking: ‘I Love to Shake My A**’
26/03/2020
Police guard shops to stop coronavirus panic-buyers and enforce social distancing – The Sun
26/03/2020
Coronavirus: Good Morning Britain’s Dr Hilary reveals ‘game-changing’ self-testing kit
26/03/2020
Recent Posts
This website uses cookies to improve your user experience and to provide you with advertisements that are relevant to your interests. By continuing to browse the site you are agreeing to our use of cookies.Ok