No vaccine passport required! Giant white-tailed eagle reintroduced to the Isle of Wight flies 29 miles across the Channel to France in just 40 minutes

A giant white-tailed eagle reintroduced to the Isle of Wight has flown 29 miles across the Channel to France in just 40 minutes.

Known as the ‘flying barn door’ due to their huge size, seven juvenile white-tailed sea eagles were restored to the island last summer as part of a five-year project.

One of them, a young male identified as G463, travelled between Dungeness and Boulogne-sur-Mer at around 1pm yesterday.

He then flew a further 105 miles (169km) through northern France before stopping near Saint-Quentin, according to his tracker.

White-tailed sea eagles which have a wingspan of up to 8ft (2.4m), had not been recorded in England since 1780 when they were hunted to extinction. 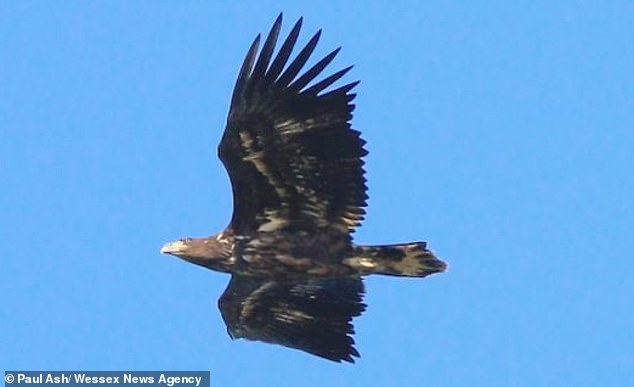 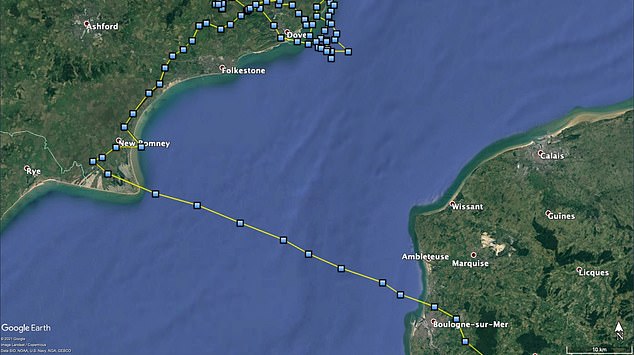 The route taken by G463 yesterday. The Roy Dennis foundation said: ‘G463 made light work of the flight to France today, flying 47 km between Dungeness and Boulogne-sur-Mer, between 13:05 and 13:45 aided by a strong NW tailwind’

Describing the French outing, the Roy Dennis Wildlife Foundation, which released the bird on the Isle of Wight last summer, said: ‘We wondered how long it would be before one of the young birds crossed the English Channel.

‘It made the crossing between 13.05 and 13.45, aided by a strong north-westerly tailwind. It will be fascinating to follow his explorations on the continent.’

A five-year reintroduction project on the island began in 2019 involving Forestry England and the Roy Dennis Wildlife Foundation.

The first group of eagles, released in 2019, are all back on the Isle of Wight or in the local region after exploring widely across England, says the charity.

Natural England has issued a licence for the release of up to sixty birds to the charity.

The project will see the birds released annually, but they are not expected to breed until 2024. So far 13 sea eagles have been released, but three have died.

In the Spring of 2020 the eagles released the previous year started to make their first major exploratory flights, tracked by solar-powered satellite tags on their bodies. 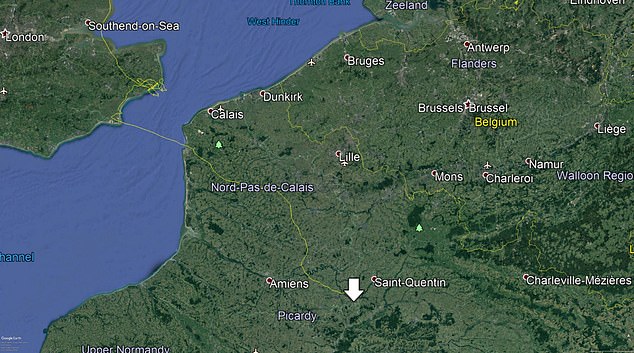 The young male then flew a further 105 miles (169km) through northern France before stopping near Saint-Quentin, according to his tracker

They have been spotted by nature lovers as they ranged as far away as Scotland, Yorkshire and Norfolk.

Their flights took them over populated places, including central London, giving people living under lockdown a chance to see a long-lost natural sight.

The white-tailed eagle has a black-ridged tail, golden eyes and have yellow talons, legs and beaks.

It is the largest bird of prey in the UK with a wingspan pushing eight feet (2.4 metres) and a body length of up to three feet (90cm).

The species suffered huge declines in Europe during the 19th and 20th centuries and is still persecuted by gamekeepers because it feeds on birds, rabbits and hares.

White-tailed eagles, or white-tailed sea eagles, were once widespread along the whole of the south coast of England, from Cornwall to Kent, before being driven to extinction by relentless persecution that began in the Middle Ages.

It was believed that they could deplete populations of game animals, as they feed on various birds, rabbits and hares.

The species suffered huge declines in Europe during the 19th and 20th centuries and was driven to extinction in the UK, mainly through persecution.

It has since been reintroduced to the west coast of Scotland and more recently to the east coast, and a reintroduction programme is currently underway in Ireland. 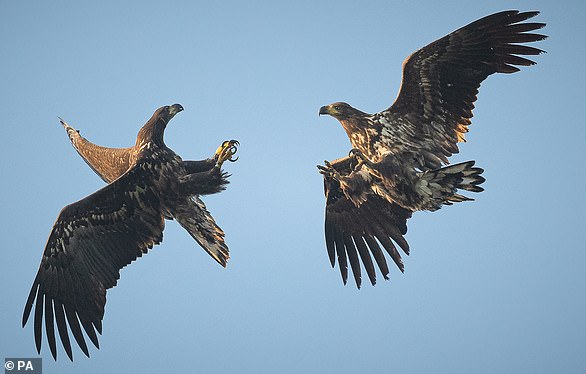 A pair of white-tailed eagles, the biggest birds of prey native to the UK, in flight (file)

As with many birds of prey, the species suffered huge losses in the 1950s and 1960s due to organochlorine pesticides such as DDT, which caused egg shell thinning.

The last pair bred on Culver Cliff on the Isle of Wight in 1780.

Following the reintroduction of White-tailed Eagles to Scotland – where there are now over 130 breeding pairs – Roy Dennis Wildlife Foundation was granted licences by Natural England and Scottish Natural Heritage to begin an English reintroduction.

In the UK white-tailed eagles are strictly protected under the Wildlife and Countryside Act 1981 and the Nature Conservation (Scotland) Act 2004.

It is an offence to intentionally take, injure or kill a white-tailed eagle or to take, damage or destroy its nest, eggs or young.

It is also an offence to intentionally or recklessly disturb the birds close to their nest during the breeding season.

Violation can result in a fine of up to £5000 and/or a prison sentence of up to six months.

Despite this, threats still exist. The main current threat in the UK is persecution, predominantly through poisoning, something which has overshadowed the otherwise successful reintroduction programmes. 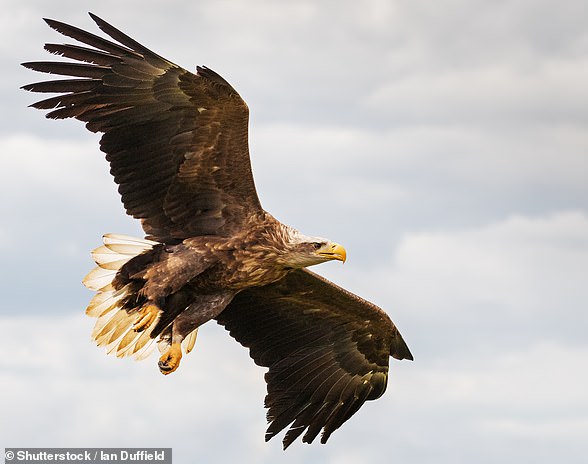 Re-establishing a population of the species on the south coast helps to restore ‘a lost species’, Roy Dennis Wildlife Foundation said.

The project will help to link populations in Scotland and Ireland with those in the Netherlands and France.

In Scotland the best places to see white-tailed eagles are Mull, Skye and parts of the northwest Highlands.

Many parts of southern England are capable of supporting breeding and wintering White-tailed Eagles, but the Isle of Wight was considered the most suitable location for the reintroduction.

It is the last known breeding site of the species in southern England and is located close to highly suitable foraging areas in the Solent and surrounding estuaries.

It also has numerous potential nesting sites in woods and cliffs and quiet areas for immature birds.

And it is well positioned to facilitate the dispersal of eagles both west and east along the coast to sites such as Poole Harbour in Dorset and Pagham Harbour in West Sussex.