Home » World News » From the Archives, 1973: Victoria’s crusade against pornography

From the Archives, 1973: Victoria’s crusade against pornography

Meagher: My job to clean up mess

Vice squad detectives seized more than 26 tons of sex picture books yesterday when they raided printers, publishers and newsagents for the second time in 48 hours. 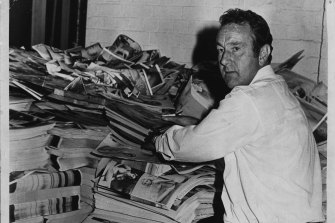 Some of the pornographic books seized by police in 1973.Credit:The Age Archives

It is the biggest police blitz on smut in Victoria.

The Chief Secretary (Mr Meagher) said yesterday that he had called for the police crackdown on sex books.

The head of the vice squad (Inspector Fred Silvester) warned that there was more to come.

“We have just begun and there will be a lot more raids before we have finished,” he said.

The owner of one of the newsagencies raided, Mr Colin Edge, of Mid-City Newsagency in Flinders Street, claimed that police confiscated overseas publications which had been cleared by customs.

“They also took material that had been cleared for sale in Victoria by the Premier (Mr Hamer) at a meeting in 1971,” Mr Edge said.

It took 20 policemen, four semitrailers and six trucks to move yesterday’s haul to a warehouse in Collingwood.

Inspector Silvester said charges would be laid over the books in the next few weeks.

Yesterday’s raids were on four publishers and newsagents.

Twelve tons of books were voluntarily surrendered to police by Collins Wholesale Books. Four semitrailers, six trucks and 20 police shifted material to a warehouse in Collingwood.

Three tons were confiscated from the warehouse of the Mid-City Newsagency, St Kilda.

The books were about to be transported to Sydney.

Mr Meagher said production of this material seems to have been boosted substantially in Victoria and police were taking action to contain it.

“I asked police to step up their activities against this material,” he said.

“I see this flood of dirty material as one which is leading to the depravity and the smirching of normal human relationships,” Mr Meagher said.

“I think its influence on immature minds could have very serious repercussions on the future of our society, and I further regard it as my duty to control it.

“As Chief Secretary it’s my job to look after the wellbeing and cohesion of the society. It’s my job to enforce the law, and the law says this sort of material should be published for profit.

“I am merely carrying out my Ministerial responsibilities.”